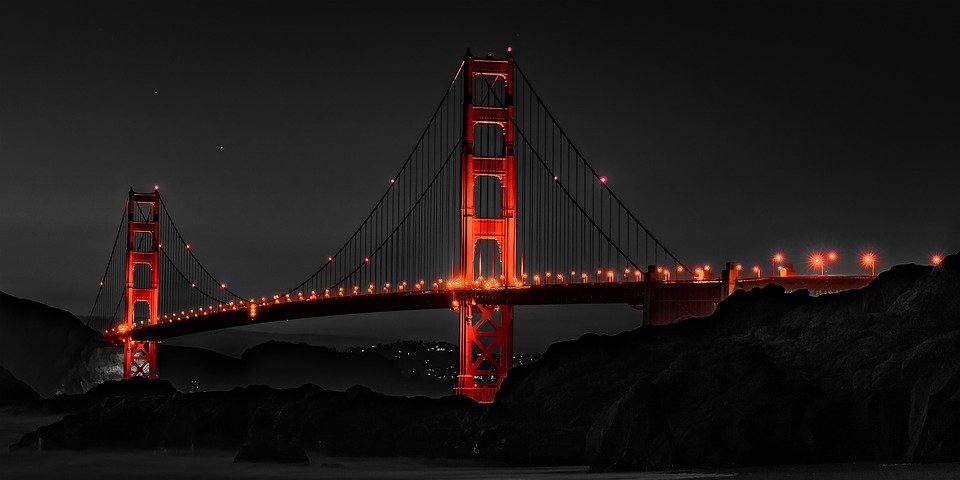 I need a Morgan Freeman to play opposite my Jack Nicholson. That’s right kids, I’m getting all old and making a San Francisco Bucket List. Actually it’s more like I don’t want to be that person who moves to a new state/country and then forgets to fit in all the cool stuff.

Suddenly they revoke your visa or don’t renew it (Just for the record, I totally love each and every member of the Department of Homeland Security. You guys are the actual best and not at all scary), and you haven’t done half of the things any self-respecting tourist would have hit up.

So here’s my list in black, white and orange, published on the interwebs because everyone knows that it’s impossible to really erase anything from that “series of tubes” (Thank you Alaskan Senator Ted Stevens… just keeping the meme alive here).

I’m walking the line between weird, tourist, and intrepid explorer. Let me know if you’ve got suggestions to add to the San Francisco bucket list.

1. Get Spooked At The Winchester Mystery House

A house built by the widow of the Winchester gun magnate, over 38 years to appease the ghosts of people murdered by Winchester weapons. As you do.

Sarah Winchester and her family were supposedly cursed, her daughter died at a young age and her husband followed a few years later.

She moved to San Jose and began a building project that would not end until her death. Legend has it that the building was the appease the spirits of those slain by Winchester guns.

The Blackhorse London Pub is a literal hole in the wall. And when in Rome, you’ve got to visit the tiniest pub available. I’m bound to feel exponentially more awkward here. Be prepared though, this pub is cash only and beer only.

3. Recapture Your Childhood at the Burlingame Museum of PEZ Memorabilia

This is your chance to see every single PEZ dispenser ever sold, including rare dispensers from the 1950s and 1960s. They also have the world’s largest PEZ dispenser.

While you’re there, add the Classic Toy and Banned Toy museums to your San Francisco bucket list. See all three museums, with the original Barbie doll, Lego sets as well as toys that were removed from the market, such as lawn darts.

Albany Bulb dog park is obviously a place where dogs go to walk their owners. But did you know that it was built on the site of a former construction rubbish dump?

It has sort of been taken over by a group of homeless people, who live on the island of sorts. But it is also a place where artists deposit their work, including sculptures, and street art. There are pieces made of driftwood, a concrete TV and a dragon scultpure to name a few.

5. Fill Your Wine Stomach in Napa

We have a couple of favourite/must-see wineries that I’ve taken friends and family to see on their visits. Because they not only have fantastic wine, but they are spectacular buildings.

Even if you’re not a wine enthusiast, your San Francisco bucket list isn’t complete without a trip to Napa. We love the castle built in 13th Century Tuscan style and the Sparkling Wine tasting “room” inspired by a French Chateau.

6. Get Lost In Grace Cathedral’s Labyrinth

Grace Cathedral has two Labyrinths and if I don’t get struck by lightning on my way in, it might be worth a shot. The first labyrinth can be found outside of the cathedral, while the second is inside. The inside labyrinth is a replica of the Chartres labyrinth, which was inlaid on the floor of France’s Chartres Cathedral in 1220.

Visit during the candlelight walks each month, which is accompanied by live music. If yoga’s more your thing, you can always visit on Tuesdays at 6.15pm to take part in a class.

Golden Gate Park is huge – 1.5 miles square to be exact – and there is plenty to see within its green walls. But the highlight for me, at least, was walking along JFK Drive to see the Bison in the paddock.

Bison roamed the prairies and open land in their thousands back in the 1500s and before. But colonisation of the US meant that soldiers began killing them as a means of eradicating the food source of Native Americans. When Golden Gate Park was first begun, it was supposed to recreate the ‘Wild West’ days, so it obviously required bison.

The first bison was brought to the park in 1891, and was later joined by others. Today, the bison in the park are all females, and are named Betsy, Bailey, Bellatrix, Buttercup, Bambi and Brunhilda.

8. Get Your Sealegs on the USS Pampanito

The USS Pampanito is a World War II submarine that made six patrols in the Pacific Ocean. During that time, it was able to either sink or damage 10 Imperial Japanese ships.

Now it’s open to both daytime visitors and those who want to sleep over for the night. Apart from being an exercise in testing my claustrophobia, Pampanito is being restored back to the way it was in 1945, using spare parts from submarines around the country to replace missing equipment.

9. Avast Me Hearties, Get ye to the Pirate Supply Store!

San Francisco’s only “independent” Pirate Supply Store. I don’t exactly understand what that means, but the shop is lots of fun, especially if you’ve got kids in tow.

Proceeds from everything sold in the shop goes towards reading and writing programs for underprivileged children as well. We visited for International Talk Like a Pirate Day and I had more fun than anyone should really.

10. Visit The Spirits of Pets Past at the Presidio Pet Cemetery

These aren’t just any stairs, as you can plainly see, they’re a beautiful mosaic set into the risers of 163 steps. They’re tucked away in a typical San Francisco neighbourhood, between houses.

But the 16th Avenue Tiled Steps bring art, beauty and creativity to an urban space and they brought the community together for the project.

You’ve really got to work to get even a glimpse of the 162-year-old lighthouse, which was the third built on the west coast. It was used to lead ships safely through the Golden Gate Straights.

It is only open to the public on certain days between certain times. You can’t even view it at other times because you walk through a tunnelled-cave to get to it, which is blocked off when the lighthouse is closed.

The San Francisco portion of the coast was so dangerous for ships, that there are an estimated 300 sunken ships strewn across the Golden Gate National Recreation Area and Gulf of the Farallones National Marine Sanctuary.

In a camera-shaped hut behind Cliff House, you’ll find San Francisco’s Camera Obscura. In layman’s terms, it uses mirrors and lenses to project a view of the coast outside into a convex lense inside the hut.

The mirror rotates so that you get a different view and it acts as a video camera of sorts. It’s quite the experience and lots of fun. It’s based on a design by Leonardo DaVinci and projects images of Seal Rock and Ocean Beach.

Bring your own piece of cardboard or scab one of the pieces that have been left behind by other sliders. Whatever you choose, try not to be the person trying to slide with no assistance.

The two steep concrete slides are tucked between two houses on a residential street. Adults have to accompany children to the mini park, and remember that people live right next door on both sides.

The slides were built in 1973 and are surrounded by a little community garden.

15. Take in the Balmy Alley Murals

Just off 24th Street in the Mission District, you’ll find Balmy Alley and its collection of murals. The street art is concentrated over one block of the alley and were first painted back in the 1980s.

Back then it was peppered with artworks expressing outrage over human rights and political abuses in Central America. Today the murals change regaularly and range in subject.

San Francisco has its own light art walk, that culminates in a festival called Illuminate SF. The festival kicks off on Thanksgiving night and runs through to New Year’s.

While there are special events during that time of year for the festival, some displays are available to view year-round, and it’s a great excuse to see the city at night.

17. Experience Nightlife at the Academy

The California Academy of Sciences adds a dance floor and multiple bars on some special nights, for a more adult take on science.

You already know that there will be music, but you also get to puruse the museum and its creatures while you’re there. Check out the website to find out what the theme is this week before you arrive.

The Labyrinth is set on a rocky outcrop of coastline close to Cliff House, but hidden in some forest along a trail. This labyrinth is demarkated by stones to create paths that lead to the centre.

The other great part about the spot, is that it gives you a fantastic view of the ocean, north bay and the Golden Gate Bridge, which is definitely something that should already be on your bucket list.

There are lots of fantastic art museums and galleries in San Francisco, but these two are my favourite.

The Legion of Honor and de Young museums are in two separate locations, but if you pay general admission to one, you get free entry to the other on the same day.

You can see work by artists such as Rodin, Monet and Renoir at the Legion of Honor, which is a replica of a French palace.

Meanwhile, over in Golden Gate Park, you’ll find the de Yong Museum, which covers American, painting, sculpture and art from the 17th to 21st centuries. That’s amongst the works of artists from other countries.

20. Go to Prison on Alcatraz Island

Can you even really say that you’ve been to San Francisco, if you haven’t visited Alcatraz? I can answer that for you – no you haven’t.

From the moment it opened its doors to criminals to in 1934, to its closure just 29 years later, Alcatraz hosted the worst of the worst from all over the country. Including gangsters like Al Capone and George Kelly.

You’ll have to book months in advance, if you want to guarantee a spot on the ferry to the island, as tickets sell out quickly, especially in the warmer months.

If you find yourself in North Bay (which you should because it’s gorgeous), you should head to Rodeo Beach for some World War II history.

The beach was an important area during World War II, when threats from the other side of the Pacific Ocean were taken seriously. When you get to the beach you’ll notice Fort Cronkhite on the left, a military post, where soldiers lived and worked.

Further up the hill (you can either hike or ride a bike), there are two battery guns, that would have been trained on the ocean back then.

There really is no shortage of beautiful places to hike in and around San Francisco. And the relatively mild weather means that you can hike almost year round if you’re keen.

Whether you want scenic views of the bay, the forest, the beach and everything in between, San Francisco has a trial for you.