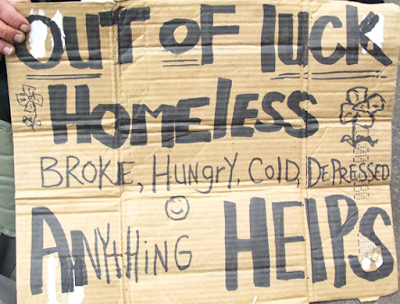 If you live or work in San Francisco homeless people probably don’t even register on your radar anymore. You see them camped out on their cardboard, in tents, or dragging themselves around in grimy wheelchairs every day. Like most things you pass daily, they fade into the background of your periphery vision, never coming into focus unless there’s some kind of a ruckus going on.

Hopefully that’s about to change, as San Francisco media outlets band together for a week, starting Sunday, in an effort to place the city’s homelessness epidemic firmly where it should be – at the forefront of our politics, social policies, and our hearts.

As an outsider coming to California for the first time, and to the US for the second, experiencing the sheer number of unwell, mentally ill and downtrodden people living on the streets was a huge eye-opener.

I’ve briefly mentioned homelessness before, when I listed the biggest culture shocks for Australians moving to the US. As a journalist in a previous life, I’ve spoken to charities and advocacy groups that aim to make life a bit easier for those with nowhere to go, and to government ministers responsible for their well-being. A photographer and I headed out with the “Vinnie’s Van” – St Vincent de Paul Society’s night patrol – to help hand out food, hot drinks and just chat to homeless people around western Sydney.

But even with of those experiences under my belt, I still wasn’t prepared for San Francisco. I’d been told to expect a visible homeless population but the extent of it was simply impossible to properly comprehend until you’ve seen it for yourself.

Tents line the boarder fences of train lines, seemingly the only place where homeless people can sleep without being disturbed by others, although it must be a fitful sleep considering the way drivers lean on their horns at every station. Others congregate under bridges, their possessions crowded close around them, while shielding their bodies from the cold and lights with blankets and cardboard.

During the day, it’s easier to spot those struggling with mental health issues or general sickness. Arguments spring from nowhere. Passersby are yelled and spat at, for their ability to ignore the obvious human suffering and just because they’re a figure that’s an easy target for someone with mental health problems. Tired men and women struggle around in wheelchairs, often not strong enough to push themselves with their own arms for the whole day.

Homelessness gives the entire city an air of vulnerability. Firstly, and most importantly, that we don’t properly look after the people who need to be cared for. Homeless people are vulnerable to attack, sickness, hunger, thirst and gut wrenching fear every day and especially at night. As awful as it sounds, the homeless, by their desperation, make people going about their day feel vulnerable as well.

And so the San Francisco Chronicle‘s editor in chief Audrey Cooper has spearheaded a week of campaign journalism that is anything but common.

Seventy Bay area media organisations, including TV, radio, print and online sources, will band together to flood the market with homelessness news for a week. The Chronicle’s articles and photographs will be offered free of charge to all participating organisations.

“We need to be a hell of a lot more creative about how we solve this problem,” Ms Cooper told the New York Times in May.

So The Chronicle will not just report on the epidemic – it will suggest solutions.

It all comes as San Franciscans found out they’ll go to the polls in November to decide whether to ban homeless encampments and give police the power to remove them with 24 hours’ notice. Let’s hope we can come up with a better solution before November.