Nostalgia food is the best kind of food 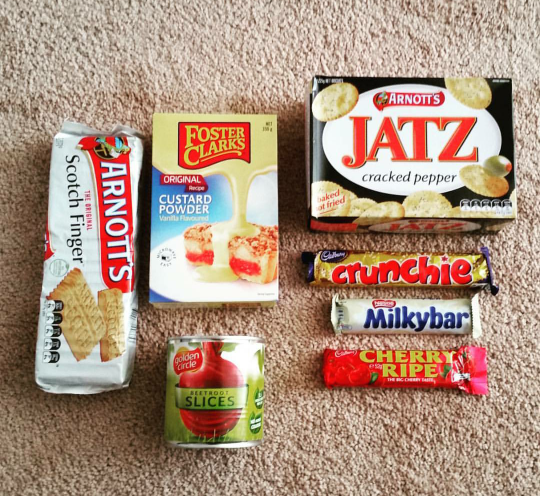 You knew it was always just a matter of time before America worked out a way to deep fry an item that has no calories at all – thereby rendering it fattening. I’m not even going to stoop so low as to act even mildly surprised at this news.

What does surprise me though, is that Scotland didn’t get there first. Shame on you wee lads and lasses.
Chef Jonathan Marcus used all manner of sciencey-thingamabobs to turn his water crispy, and The Science Explorer describes it in all of its undelicious glory. But this is all just a “clever lead in to talk about my favourite thing. Food. It’s not the first time I’ve reminisced about Aussie food.

Obviously it’s different in the US. Food is filled with strange things like corn syrup and transfats and the chocolate tastes different (in a bad way) and the sweetness is dialed up about 10 notches in everything you buy.

So it makes you miss the familiar things that you’re used to back in Australia, or wherever home is. Sliced bread, being able to find a huge variety of Asian food products during your normal grocery shop, your favourite chips etc.

It’s not always the huge, special family meals that you miss the most, but the little once-in-a-while treats from childhood or growing up.

For me that food is Foster Clark’s chocolate custard and canned fruit salad. It’s just vanilla custard powder that comes in a box but for as long as I can remember, Mum used to make it as a special dessert after dinner in winter.

She’d have to add cocoa to the mixture because my father, being the Maltese man that he is, refuses to eat anything white-coloured and apparently yellow counts as white in this case. Go figure.

On particularly cold nights she’d get out the special custard pot. One handle had snapped off and it had an uneven bottom but it was used only for custard because once that stuff stuck it was a nightmare to clean off.

Mum would put the milk on the stove to heat slowly while we ate dinner then began the task of mixing the lumps out of the powder, cocoa and sugar concoction before adding it to the pot. Then, as I got older, she and I would take turns stirring, which took forever and the smell was torture.

Then we’d all get a bowl and spoon some canned fruit salad over the top. So delicious!

Vanilla custard was the last meal Mum ever tried to eat. The day before she died I made it for her to try to warm her up as her body struggled to regulate temperature. That was also the last time I made custard. It’s strange how food can have such an effect on you to the extent that even looking at the box makes me think of that last morning she spent at home before the ambulance came for her.

But five years is long enough to avoid something that’s just powder in a box and fruit in a can. So I went to my favourite Aussie food website, Simply Australian, ordered some Foster Clark’s and last week I made my own chocolate custard.

What food do you miss? And what does it mean to you?