The NFL picks and tips you’ve been waiting for! 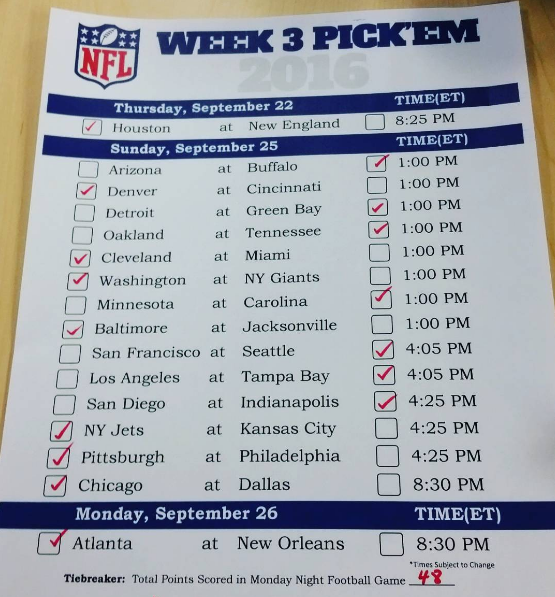 Sportsball season has crept up on me again. By “crept up” I mean, it never actually ended. It always seems to be a sporting season around here. The NFL leads into the hockey and that somehow links up with baseball? Or maybe it’s the other way round. Basketball’s wedged in there someplace.

I dunno. In Australia it’s either soccer or cricket season. If I can be bothered, it might be rugby league time – but I am less enamoured with NRL as the years wear on and The Eels continue their choking spree.

But I’m in the US now, it’s time to embrace all facets of life (except maybe gun ownership, I might leave that one where it is). So when one of the office dudes brought around this week’s NFL tipping sheet and tried to bypass me, I was having none of it.
I may have talked a big game. About how they might know all the figures, stats and who’s out injured this week but I have chance on my side! And a system that has failed me every single time I’ve ever visited the TAB (not that many times).
That’s right kids, I went with the time-honoured “which City sounds better” method of tipping. It takes all of the “educated guesswork” out of the equation and boils it all down to stereotypes and misconceptions. My favourites!
It’s probably why I chose Houston over New England for Thursday night’s clash – since Houstonites sound WAY TOUGHER than anyone from New England does. Of course someone neglected to mention that NE’s moniker is The Patriots. Had I known that I would have definitely gone with the flag wavers since America is all about America. If you know what I mean.
I picked Denver to thrash Cincinnati because my favourite ultrarunner, Scott Jurek, lives in Colorado. Somewhere. I think. The Green Bay Packers will trounce Detroit merely because I know Green Bay stands for The Packers, and that family is rich as hell so it stands to reason that a team of the same name will hold some clout. Or pay someone off?
Everyone knows that Cleveland Rocks! The Drew Carey Show didn’t repeat that slogan in its theme song for nothing. So they’re definitely going to claim victory over Miami… the bunch of retirees hanging out on a beach. Not that I’m talking smack or anything boys.
Nothing against Oakland, but, c’mon, it’s Oakland. Even I know they have no hope. I picture New York as more of a baseball city, hence the Giants will go down to Washington. However, a little further down that same list sits the NY Jets. And I went with them over Kansas City because aren’t The Jets a gang in West Side Story?
Minnesota and Carolina are much a muchness. I know nothing about either of them so Carolina it is! It’s a pretty name. Same goes for Pittsburgh and Philadelphia. They’re the same thing. Pittsburgh it is – I once heard a song by Aussie comedy trio Tripod about a place called “Pissburgh” and they came out on top. Enough said.
I was in Seattle last year during an NFL game and everyone was going absolutely berserk for their team. That level of team spirit deserves backing. Sorry 49ers. You don’t got nothing.
Chicago has a bunch of gun crime last time I checked (which wasn’t that long ago). So I’ll tip them over Dallas every day of the week.
As for Atlanta and New Orleans, who bloody knows? I asked the football heads at work and they spouted a bunch of numbers for about 15 minutes and I lost interest.
So that’s it! My NFL footy tips! Enjoy.