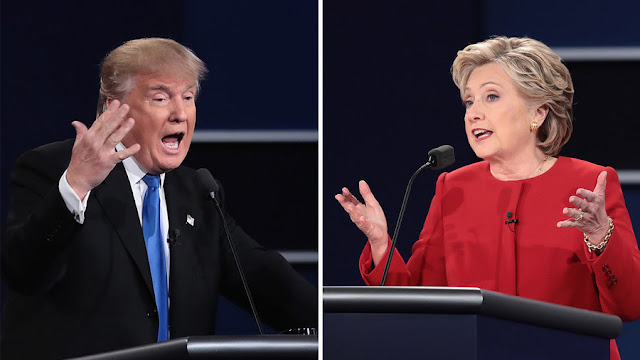 American politics is a junkyard. An unfathomable labyrinth of smokescreens, white lies, beauracracy and money. If you think you’re going to find anything that works easily in that tip, you’re kidding yourself.

I watched the entire Clinton v. Trump extravaganza on CNN last night, in all its cringe inducing, shouty, finger pointing glory.
As I sat there listening to Trump pile lie after lie on top of one another, aggressively interrupt Clinton at every opportunity to lie a little more, I started wondering what the debate looked like through the eyes of his supporters.

That scared me. Because if this campaign has proven anything it’s that Trump could “stand in the middle of Fifth Avenue and shoot somebody and I wouldn’t lose voters, OK? It’s like incredible”. To put it in his own words.

He seems to be right on the money with that. His supporters believe every single word that comes out of his mouth or off his Twitter account. And buh-lieve me, there are some corkers in there. My favourite, and possibly the most talked about example from last night, is this one:

The concept of global warming was created by and for the Chinese in order to make U.S. manufacturing non-competitive.
— Donald J. Trump (@realDonaldTrump) November 6, 2012

He then swore black and blue to Clinton and debate moderator Lester Holt that he “never said that”. It’s just one example in a murky ocean of lies, yet his supporters continue to turn a blind eye to the mountains of evidence. What does that say about a large swathe of the country?

I’m not particularly a hardcore Clinton supporter. There was something that unsettled me about her performance last night. I don’t know if it was her oft-flashed smile, or maybe that she seemed to stumble on getting the thread of what she wanted to say a few times, which made her arguments seem all the more rehearsed. Thinking about it, though, it’s probably not a bad thing to seem measured and considered when you’re running to be President.
Then there’s that matter of the email server. The most disturbing part of that saga to me was that she defended her actions for so long, saying they were allowed when they clearly weren’t. It just fosters that “who can you trust when they all lie” mentality that keeps voters away from the polls. And that apathy is what’s going to win Trump an election. It’s also one of the reasons that he’s made it so far in this race in the first place.
In any case, Clinton definitely won the debate in my eyes – but that won’t make a difference to the people whose minds Clinton has to change. They’ve booked their seats on the #TrumpTrain till the bitter end.
I mentioned the American political junkyard to a workmate, Dennis, this morning and he responded in the self-deprecating fashion that I’m starting to love about Californians:
“Yeah, but we’re the best star spangled awesome junkyard in the world, and don’t you forget it!”
READ MORE:
Australia Day in the USA
Powered by Inline Related Posts

Linking up with The Ultimate Rabbit Hole #90. That’s probably an apt description of this federal election.