There are three things about me you should know: I’m horribly uncoordinated, unable to balance, and visibly uncomfortable around people I don’t know and new situations.

That’s why I decided to give yoga a go. Because, you know, when in Rome… or California.

Obviously, it didn’t go down that way at all. It took a lot of kicking myself in the butt and a phenomenal teacher to get me there.
There used to be a weekly half hour meditation session during lunch at work, before cost-cutting became de rigueur. I’m a hopeless fidget and my brain does not like to meditate but I showed up anyway.
It was fantastic.

Long story short – our trainer, instructor, yoga and meditation extraordinaire Mackenzie (her website says teacher, but I’m all about taking liberties) was an absolutely lovely person who wasn’t at all “crunchy”, and had a good dose of the ‘laugh-at-yourself’ attitude.

Mackenzie mentioned that she was running a series of night yoga and meditation classes at a studio and I figured it was time to bite the bullet.

You already know that I’m sporting some stellar distance running injuries and my hips are basically being held together with elastic bands and magic. My physio had already given me the yoga green light MONTHS ago, but I was too chicken to take the plunge.

Rocking up to the first session was nerve wracking. I can’t even tell you how many times I tried to talk myself out of showing up that day.
But I was greeted like an old friend by pretty much everyone in the room, which was exactly what I needed. So I guess that means that yoga people are basically the best people, right?
I’ll give the caveat that the classes were billed as “gentle hatha” yoga, with some guided meditation and relaxation thrown in. So they’re perfect for my inflexibility, lack of yoga knowledge and propensity to want to curl up and go to sleep.
It’s like two birds with one stone – I get to actually do some proper stretching instead of just pretending that I do that twice a day (who even does that? I’ll stretch after a run, but that’s all my muscles are getting), AND I get to have a little think about life and my reaction to things.That last part is way more useful than you might think. I love the concept that I can choose the way I respond to situations and let unnecessary criticism roll off me.
READ MORE:
COVID-19 Quarantine in Australia
Powered by Inline Related Posts

I think this may be the closest I’ve come to feeling like a Californian. I drive home afterwards and have the best sleep. Plus I always feel great on my run the next day.

And that’s how I became a yoga convert. 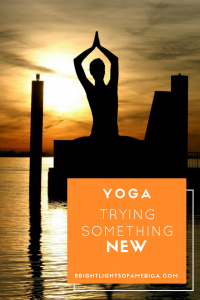