2shares
If you’re planning to tour Capilano Suspension Bridge on your trip to Vancouver, Canada, there are a few things you should know. You can visit at any time of the year and it will be a beautiful walk through a park that lets you soar through the trees and over the top of a coastal rainforest. But my personal favourite time of year to tour the Capilano Suspension Bridge Park would have to be the month before Christmas.
You can’t beat a Capilano Suspension Bridge Christmas, when the park is covered with twinkling lights everywhere you look, and it just feels that little bit more magical than usual. The park runs the Canyon Lights festival between November 22 and January 27, when it strings hundreds of thousands of coloured and white lights across the Suspension Bridge, through the Treetops Adventure and over the Cliffwalk. The rainforest and canyon below are also transformed with lights to make it feel like you’re surrounded by a warm glow. Which is great, since it gets decidedly chilly at that time of year. 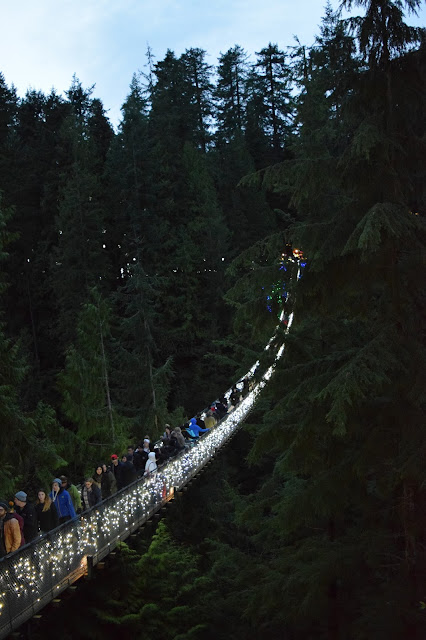 All lit up with A LOT of visitors
The park is more than just a suspension bridge, if you haven’t already figured that out, but it is the centrepiece. The first bridge was built after Scottish civil engineer George Grant Mackay bought land on either side of the Capilano River in 1888. A year later a footbridge was suspended between the two canyon walls. It was made of hemp rope and cedar planks, which were swum across the river by a team of horses.
Since then, it’s been rebuilt, restored and reinforced quite a few times and today’s incarnation is anchored by cables encased by 13 tonnes of concrete on each side. Suffice to say, you’re safe even if it doesn’t quite feel like it as you bob and sway along the expanse.

Getting to the Capilano Suspension Bridge Park From Vancouver 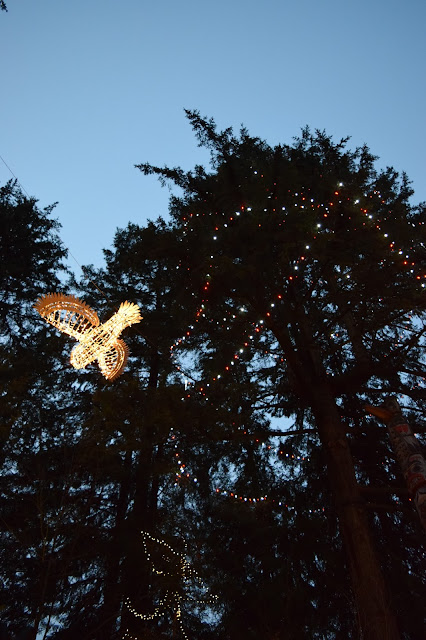 The park is situated across the Lion’s Gate Bridge, just 9km away from the Vancouver city centre. But if you’re staying in Vancouver and decided not to rent a car (why would you, it’s such a walkable city!)  there’s an easy way to visit. Make your first stop the Tourism Vancouver Visitors Centre (200 Burrard Street) to buy slightly discounted tickets for the park. Then, catch the shuttle bus from right outside the visitor’s centre. It will make a few stops through the city, before driving through Stanley Park (well worth a visit) and out to the Capilano Suspension Bridge. You can catch the same shuttle back when you’re done in the park.

Read More: Visting Vancouver – 8 Things to see and do

If you do have a car though, it’s pretty much a straight shot out of the city and over the Lion’s Gate Bridge, which does not have any tolls to worry about.

What is in the Capilano Suspension Bridge Park?

Don’t let the name fool you, there’s much more than just an impressive suspension bridge within the park. There’s the Cliffwalk, which follows the granite canyon wall and sometimes arcs out until you’re just standing over river with nothing but glass and steel between you. There is also a Treetops Adventure, which lets you climb up through the rainforest canopy and wander along mini suspension bridges to crows’ nests high up in the air, for a view of the forest beneath you.
The park has one other surprise up its sleeve though – it is the home of the world’s largest private collection of totem poles. The totem poles were carved by Native Candians and they are spiritually significant to them. They have many different fucntions, including as signboards, clan lineages and memorials. Staff dressed in 1890s costumes roam the park and work out of the Story Centre, where you can learn more about the history of the area.

It’s hard to convey the length of the Capilano bridge in words. It is 140 metres long and is suspended 70 metres above the river, which makes for a bit of a shaky trip over the water. Sure, you can see it stretching out for a long way, but your brain doesn’t really comprehend it until you’ve walked up the few steps and begin your descent onto the wobbly bridge. You might expect a bridge of such length and weight to feel more solid than it does. But once you get a few people walking across, you feel every footstep bouncing up and down. I dare you try try to cross the bridge without holding onto the guide ropes! Think of it as your Indiana Jones challenge.
Related: You really should explore Canada by train
READ MORE:
The best things to do in Sonora, California
Powered by Inline Related Posts
You’re smart enough to work out that the bridge you’ll step foot on today is not the same one built back in 1889. Rae Mitchell bought the property surrounding the bridge in 1953, with the idea of turning it into a tourist attraction. It took a team just five days to completely rebuild the bridge and get it ready for people to visit. If you’re still worried about the Capilano Suspension Bridge’s sturdiness, the owners say it can hold 97 elephants, 203 moose or 4,520 beavers. Choose your own animal and imagine from there. It certainly conjures memories of that children’s song “Four grey elephants balancing, step by step on a piece of string…“. 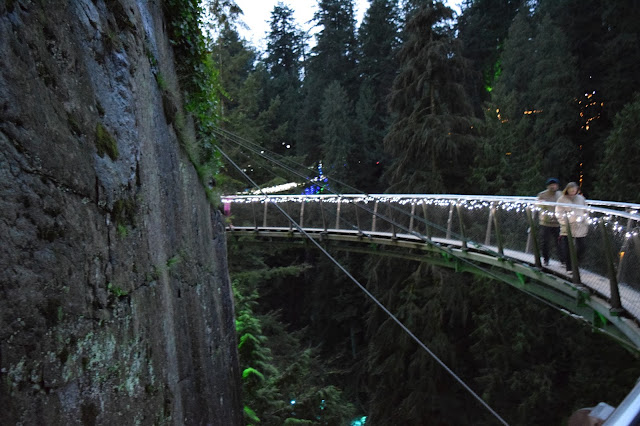 Those steel ropes will keep you safe as you stroll above the canyon floor
The Cliffwalk is marketed as not being for the feint of heart and I have to agree with that summation. It was opened in 2011, so it’s the newest of the park’s attractions and possibly the most jarring. At its highest point, you’ll be walking 90 metres above the canyon floor below you, along 213 metres of narrow walkway hugging the cliffside. But don’t worry too much, it is firmly anchored into the rock face – at some points the anchors span six metres into the cliff
You’ll want to steel yourself for the sections that are just a glass floor, giving you an unobstructed view underneath your feet to the forest below. Stop along the way to read about the way water interacts with granite, and the animals and plants that can be found in this section of Vancouver coastal rainforest. 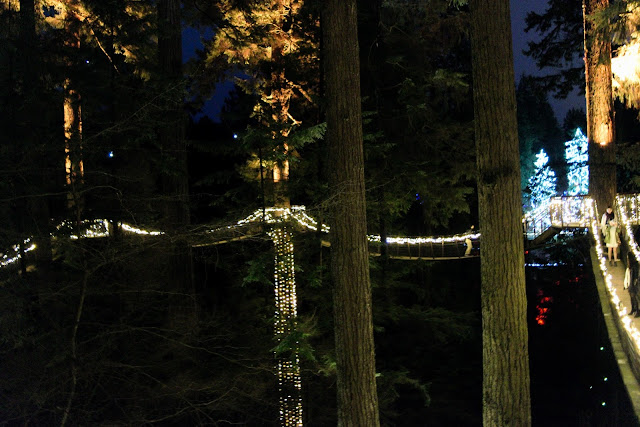 This is the attraction that really brought out my inner child. Climbing the stairs up to the Treetops Adventure and finding myself on the first little suspension bridge made me feel like a pirate in a movie that you’d watch as a kid. It was all running to the next crow’s nest to check out the water or trees below. I probably embarrassed Mr M by letting out an unintentional “yo ho ho” at one point.
Related: Vancouver Historic Half 10m race recap
The Treetops Adventure is made up of seven little suspension bridges strung between 250-year-old Douglas fir trees. So you can see the forest in the same way that birds do as they swoop over, looking for the perfect branch to nest in. The park actually has more than 2000 Douglas fir trees, 157 Western Red Cedars and 144 Western Hemlock trees. A windstorm knocked down a 300-year-old Douglas Fir back in 2006, and it landed smack on top of the big suspension bridge. No the bridge didn’t break, but it took months to clean up the destruction that the tree caused. 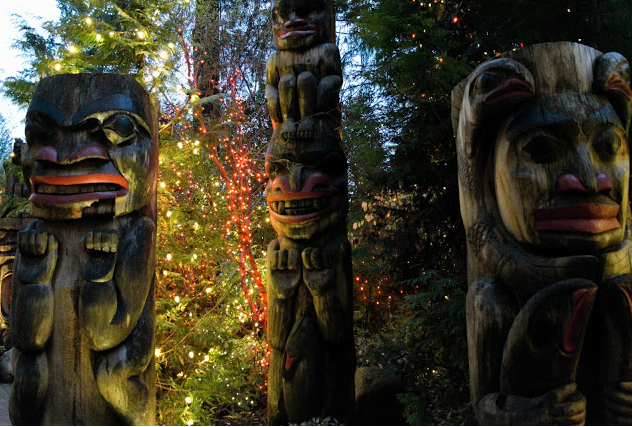 Totem poles were used to pass on messages and stories, and to record genealogical history

The name Capilano actually comes from the Squamish Nation – the Aboriginal people who lived in the Greater Vancouver area for thousands of years, “since beyond recorded history” according to the Nation. They called the river Kia’palano, which means “beautiful river”, and was also the name of a Squamish vhief who lived in the area during the early 1800s. Today, 16 chiefs remain of Squamish Nation leaders.

Totem poles and information booths spread across the park give a glimpse of life in the Squamish Nation, before it was invaded by Europeans. 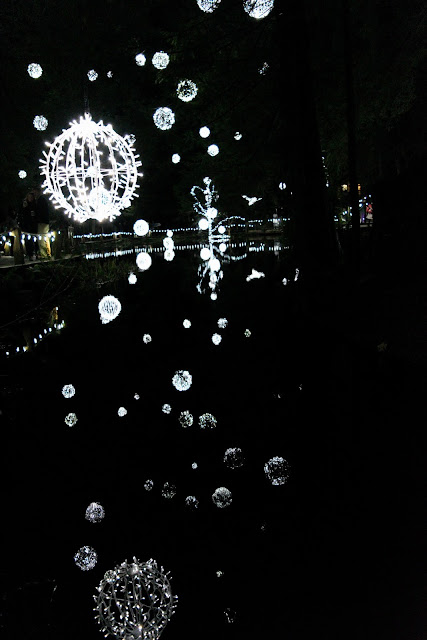 Now, back to the Canyon Lights festival, because you can tell that all my photos are from there. The light sculptures over the Treetop Walk dazzles as it reflects off a pond of almost-still water, creating a beautiful mirrored effect. And the coloured lights illuminating the rushing river below the Cliffwalk, and lighting up the trees around you, make it feel like you’re wandering through a fairytale.
If you get the opportunity to visit during Canyon Lights, try to make it out half an hour before sunset, so that you can experience the park in daylight and when it’s all lit up. You’ll also get to see the world’s tallest living Christmas tree, towering above the park at 46.6 metres tall.

Park prices, based on age and ID:
Park hours vary depending on the time of year:

The park is located at 3735 Capilano Road, North Vancouver. 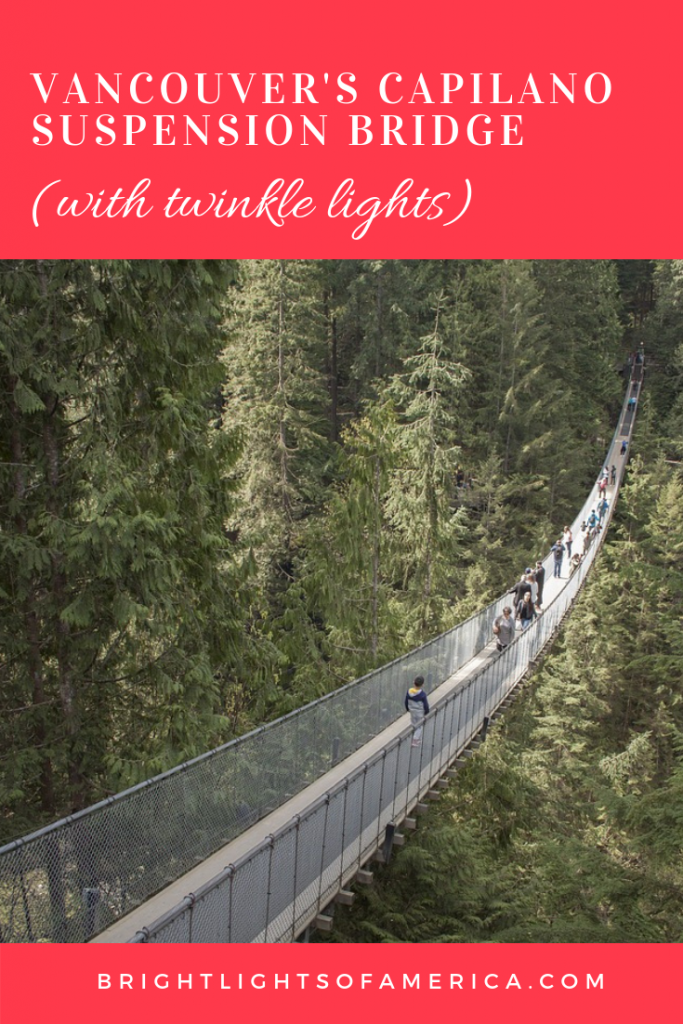