Aloha Maui: Things to see and do 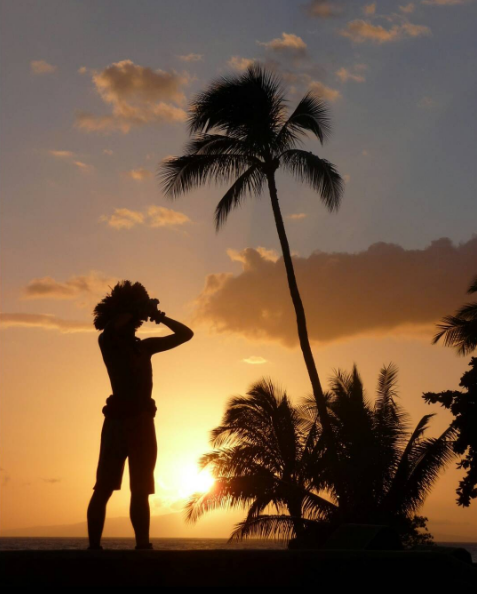 If relaxing in the sun while cool, clear water laps at your feet is your idea of the perfect holiday, then Maui should be your destination.

I’ve been putting off writing about our trip to the Hawaiian island for months now, for one simple reason: we didn’t pack in as much as I’m used to when travelling. Usually I’m up at dawn and don’t get back to the hotel/hostel/dive with a bed until late at night.
But Maui was a completely different speed of holiday, and that’s actually okay for some people sometimes. While it’s not my style it was exactly what I needed at the time.
We stayed in Kihei, which has its share of hotels and resorts but they’re spread out enough so as not to feel like you’re battling a wave of other visitors. And, like most places on Maui, the beach is right at your doorstep. 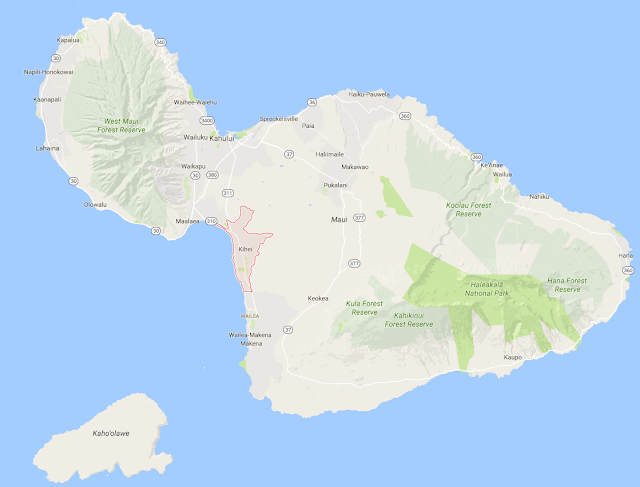 I don’t want to cast aspersions on Maui though, if you want to get out and about and do things there is plenty of things to see and sink your sense of adventure into. But, equally, if forgetting the rest of the world is the aim, you can do it here too.

If you do nothing else, you need to eat. The fresh seafood is delicious pretty much anywhere you go – but my mind is and has always been set firmly upon dessert. 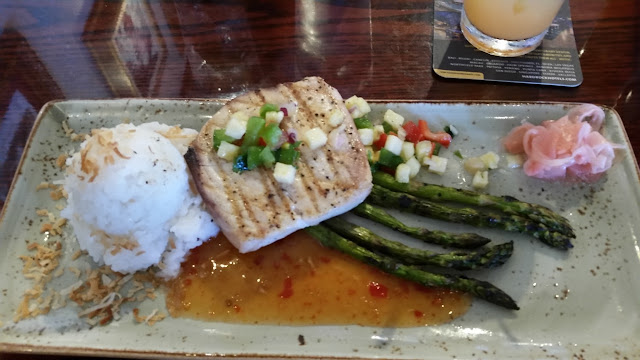 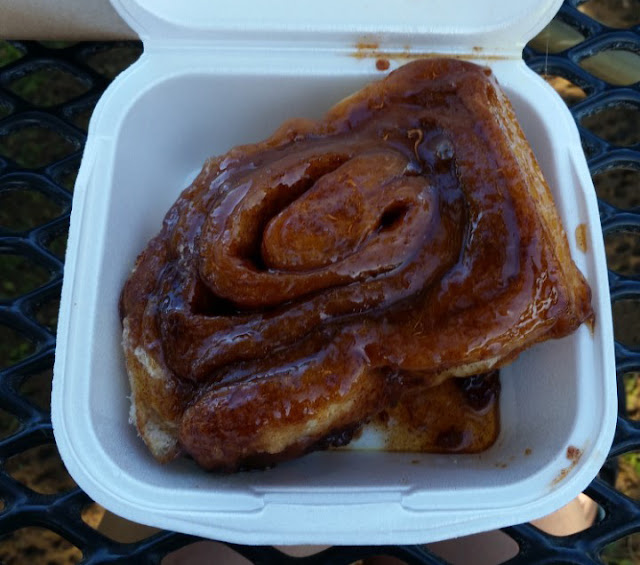 I challenge you to find a better cinnamon roll anywhere in the world. The owners epitomise the friendly, easy-going nature that Hawaiians are famous for. Everything’s better with sugar in your veins, trust me.

Mr M and I got into the habit of spending the mornings on the beach, swimming and lazing around, then heading back to the apartment for a snooze and a trip out later in the afternoon.

My favourite beaches in the world used to be in Nice, France. You head out to a white pebbled beach, kick back on sun loungers while cocktails and drinks are brought to you. Then you go for a little dip in the crystal clear water. It’s immense.
The downside is the pebbles. They’re kind of tough (and hot) on your bare feet. Then I went to Maui, specifically the beaches in Kihei, and I had a new favourite stretch of beach. 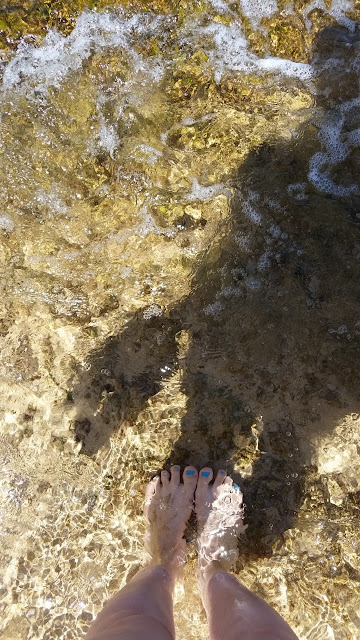 The sand is beautifully powdery – perfect for sandcastle construction, the water was like looking through glass, there was a notable lack of pesky seaweed, it was cool but not freezing cold and the sea life was everywhere! I saw turtles and fish whenever I went into the water.

Since I don’t see anything wrong with an adult building sandcastles, I bought my own bucket and shovel and we had a great time building turrets and moats and  planting leaf-flags. The best.

As you’d imagine, most of the adventurous activities on Maui centre around the water. Snorkeling with fish and turtles, paddle boarding, surfing, scuba diving and cruising on the sea.
Coordination is not my strong point by any stretch of the imagination. If you took a newly-born foal, placed it atop a surfboard and pushed it out to sea, I’m fairly sure it’d have a better chance of staying on said board than I do.

Pin me for later!
With all that in mind, we booked to go paddle boarding. I didn’t fall of once. I will say that it’s tough on your feet and leg muscles, trying to stay upright and steady on the water, but it was amazing.
We paddled out alongside curious turtles with our instructor, who mercifully, didn’t laugh at our wobbles all that much. It also helps that the classes are mostly in the mornings, when the water is calm.

If you’re not so much into liquids, you can always head out to Haleakala National Park to see the spectacular sunrise or hike the crater. The park covers the summit of the largest volcanic mountain that formed Maui. 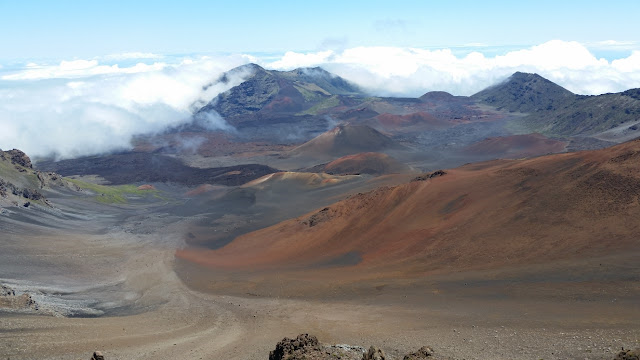 One of my favourite parts of this trip was driving up through the clouds, then standing at the edge of the Visitor’s Centre looking out at the cloud cover below. There are 48 kilometres of hiking tracks within the park and some seem deceptively easy. Just remember you’re up high and the air is thin so everything feels much more difficult up there.

If you’ve never been to a traditional Luau, it’s something that you really have to experience for yourself. Mr M and I were lucky enough to score tickets to the Te Au Moana Luau in Wailea from his parents and while they were expensive, I think they were worth every penny. 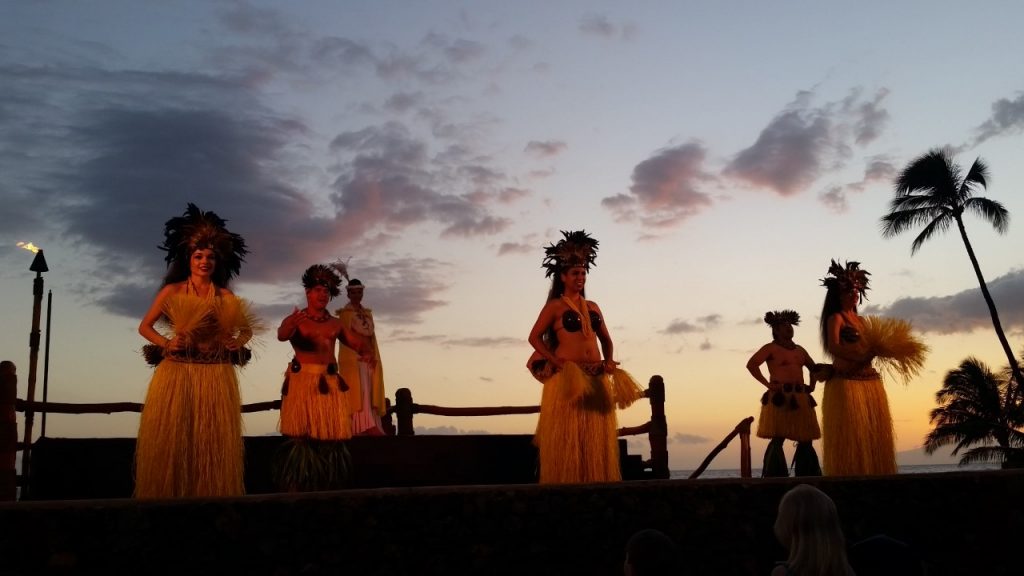 A Luau is a traditional Hawaiian party or feast with food and entertainment. Sometimes the food is part of the entertainment. We were taught how to peel a coconut and shown how the Kalua pig is slow cooked in an underground oven, buried with hot coals for hours.
Obviously the entertainment differs depending on the Luau, but we were shown the story of Maui the demi-God of Polynesia. Dancers twirled, spun and gyrated dances from Tahiti, Tonga and the Cook Islands and a Samoan fire torch and knife dance rounded out the performance.

If you happen to make it to Lahaina (a more touristy part of the island where cruise ships dock), make a point of visiting the banyan tree. 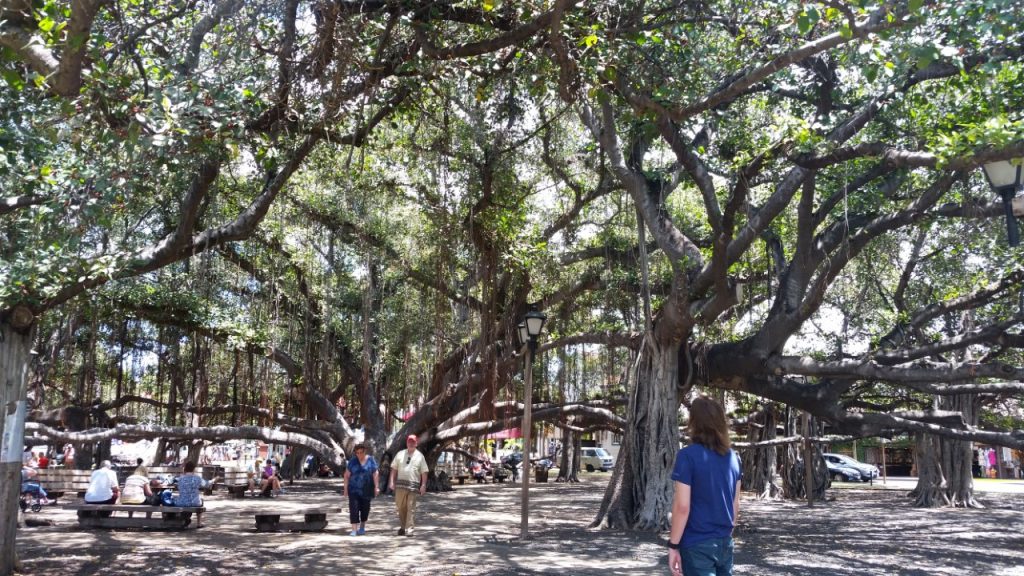 The trees grow unusually, sending roots dangling from its branches and into the ground below, where they form new trunks to hold the gigantic trees up. 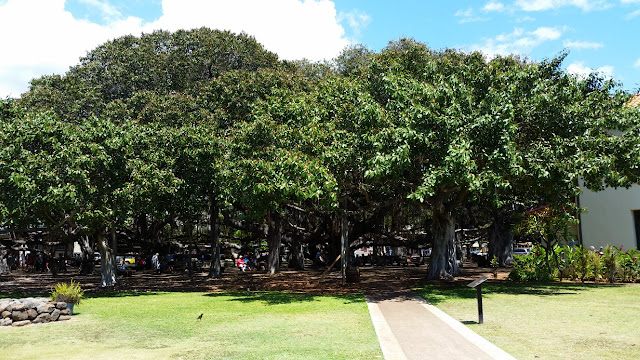 This tree was planted in 1873 to commemorate 50 years since the first American Protestant missionaries arrived on the island. It has now grown to 18 metres tall and its canopy covers 0.6 hectares, making it the largest tree in the US. It is bolstered by 16 major trunks apart from the main trunk planted 143 years ago.