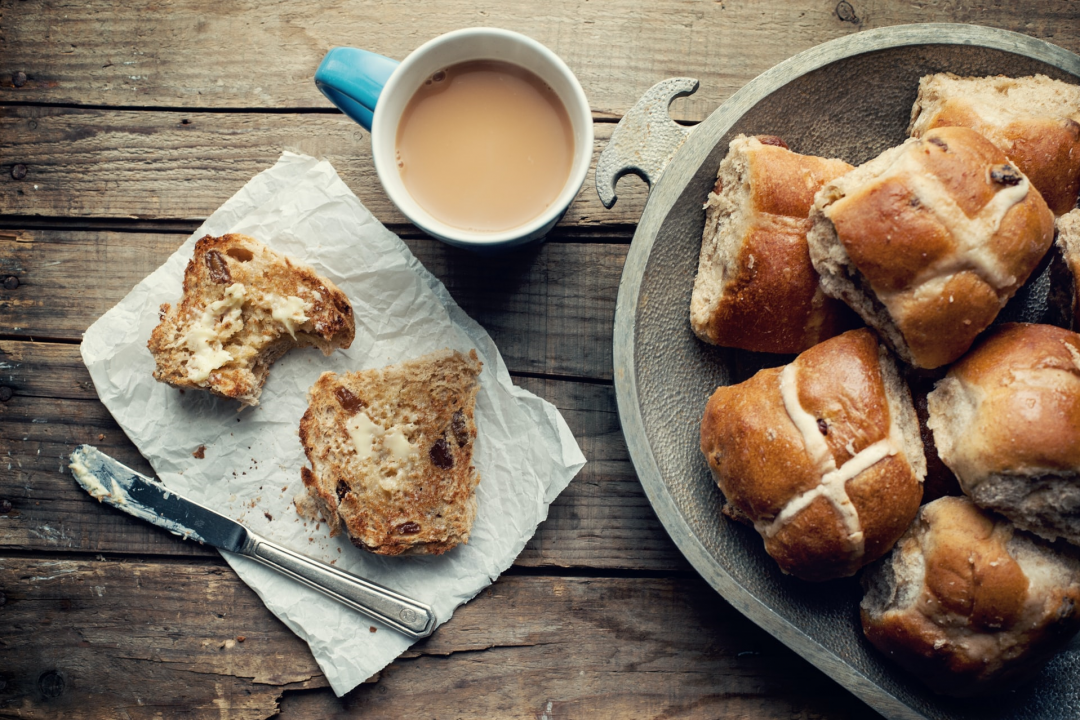 Hot cross buns. It’s just not Easter without them and when you’re living in San Francisco, they can be a bit of a challenge to track down.

A challenge, but certainly not impossible, as I found out the other day, when I plotted a hot cross map across the fair city (and down the peninsula) and drove to every bakery that promised the sweet Easter treats.

Update (April 5, 2020): When I first wrote this post back in 2017, I drove around the Bay Area purchasing and sampling Hot Cross Buns from all over the place. But this year, we’re living in different times. Quarantine-heavy times. So doing a drive-by tasting to update this post was not an option.

So this year I’ve added more places that sell Hot Cross Buns across the Bay Area, but I can’t really review them for you. Those new stores will be easy to find, just look under the “New Additions – San Francisco Hot Cross Buns” subheading. I’ve also included notes for those stores that are no longer open.

It’s one thing to sell hot cross buns, it’s an entirely different thing to make them the way us Aussies, Brits and Europeans are used to.

Now, I’m not fancy – my favourite HCB’s usually come from Woolworth’s back home and are delicious hot or room temperature.

Despite my bogan-attitude to HCB’s, I decided to do the taste-testing for you. There’s nothing more disappointing than getting excited about a taste of home, only to find out it’s got an “American twist”. So today I’m taking a bullet for you, and delivering my completely unbiased opinion of San Francisco’s hot cross buns.

There were a few failures on this mission, mostly on my part, which I’ll mention here:

These are the extra places selling Hot Cross Buns as of April 2020. 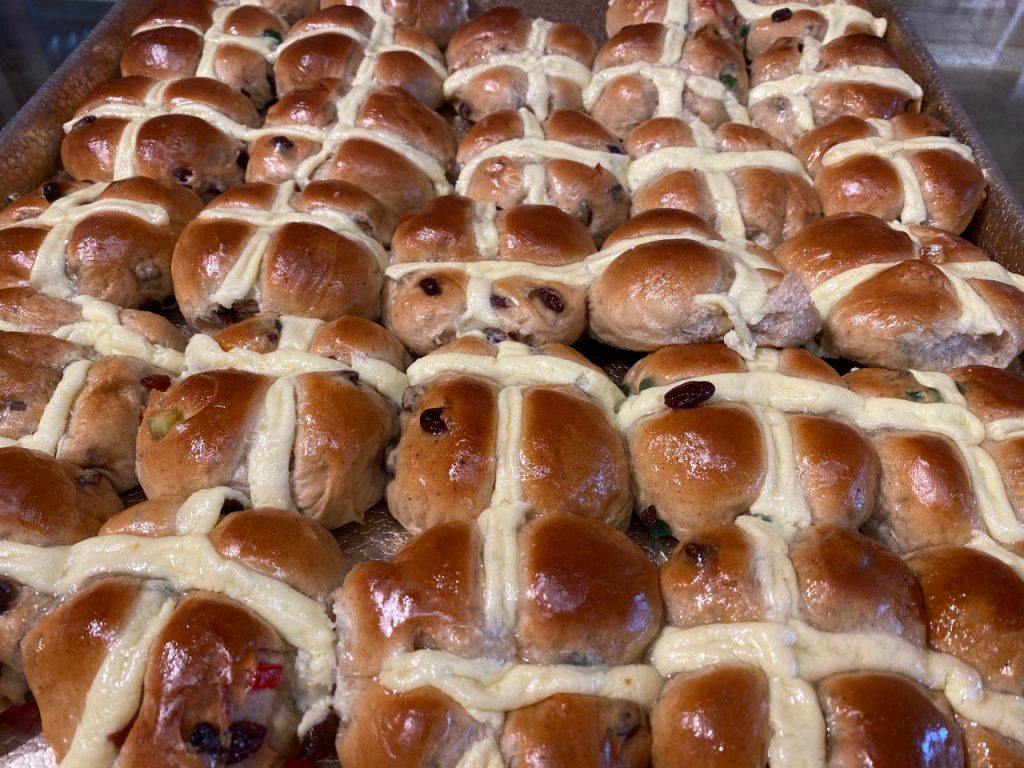 These look so good I want to eat them off the page. Picture: The Cakery.

Have HCB’s available for online order here although you will have to pick them up on Saturday, April 11, after 9AM. You can order them as singles, or by the dozen.

I have an order in and will let you know what they’re like next weekend (because everyone needs an Easter treat). But judging from the picture, I’m expecting them to be great.

Starter Bakery visits farmer’s markets around San Francisco and throughout the peninsula and east bay (see here for details).

If heading to a farmer’s market is not an option for you, Starter Bakery’s Hot Cross Buns (which look good!) are available for delivery through Good Eggs here, or you can order them through Starter Bakery’s online store from Wednesday, April 8.

They are also available at Bi-Rite in San Francisco and Berkeley, as well as the Berkeley Bowl. 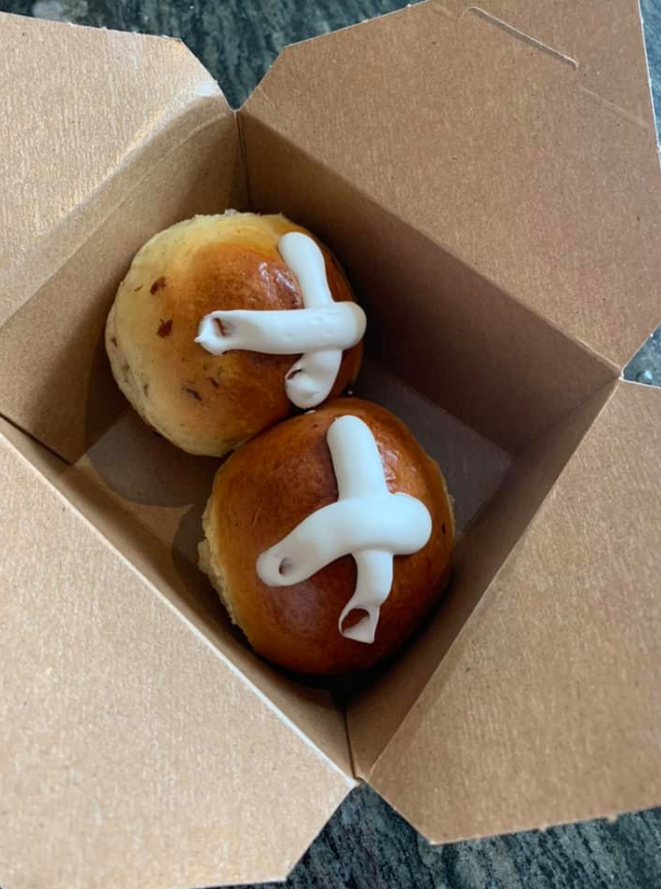 Lotta’s Bakery seems to have some kind of hybrid scone bun on sale at their Polk Street bakery, with *gasp* icing crosses.

I haven’t tasted them, and I can’t find an entry for them on their website, but it looks like the bakery is open for those who live nearby. If you’re in a pinch and are really missing home, give them a try.

I’m stretching the definition of Hot Cross Buns a little to include Little Bee Baking.

They are closed during quarantine, however they open on Saturdays from 10am-2pm with a pop-up menu, which includes bake-at-home fruit scones (good if you’re desperate and can’t find actual HCB’s elsewhere).

You have to pre-order for pick up, and orders have to be in by the Thursday before 6pm.

Reviews from Easter 2017 (with updates)

Update, April 2020: Still open for take out only. Does not deliver. 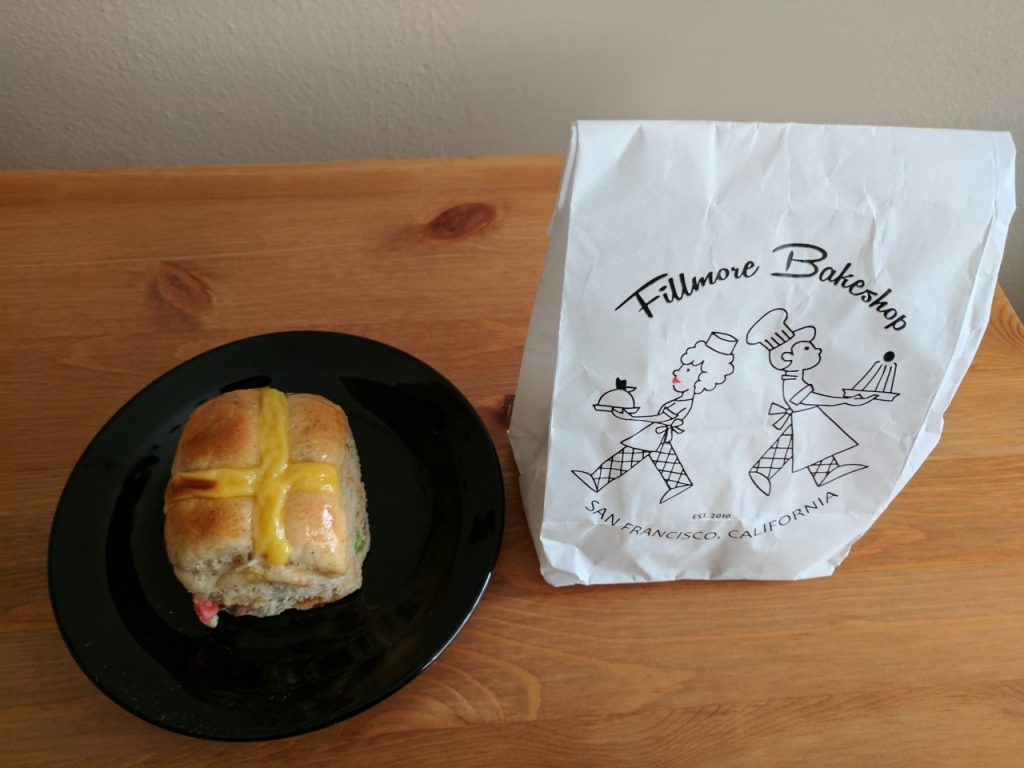 There’s a spice in here that I can’t quite put my finger on. Maybe it’s ginger? Mr M thinks it’s lemon. It tastes a little different to what I’m used to, but different doesn’t mean bad. It’s actually pretty good. It looks like they’ve used golden raisins, which are nice and juicy – not dry at all. The cross is made out of some kind of custard, so it’s not crispy. All in all, two thumbs up. 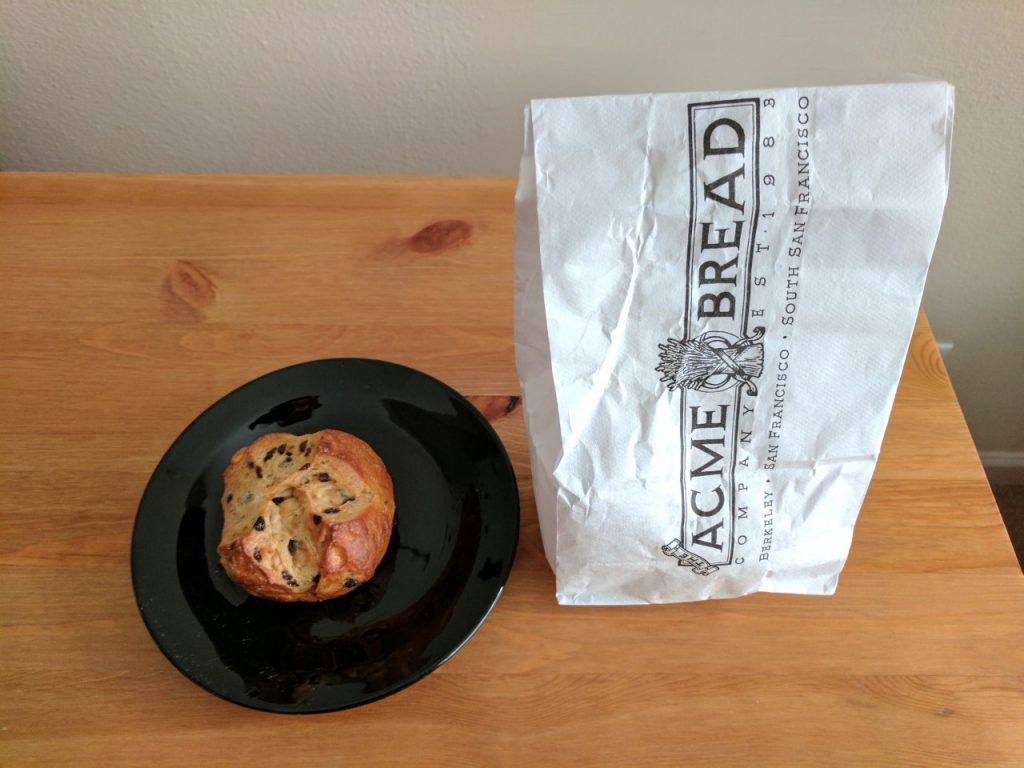 Full disclosure here, these aren’t billed as hot cross buns, they’re actually called currant buns. But when you’re desperate, the closest thing will do. I was expecting them to be dry, but they were actually really nice once I heated them up and put a bit of butter on. The best part, I think, was that they used traditional candied peel, without the glace cherries that most bakeries here put in their HCB’s. Not as spiced as others, but still a great substitute. 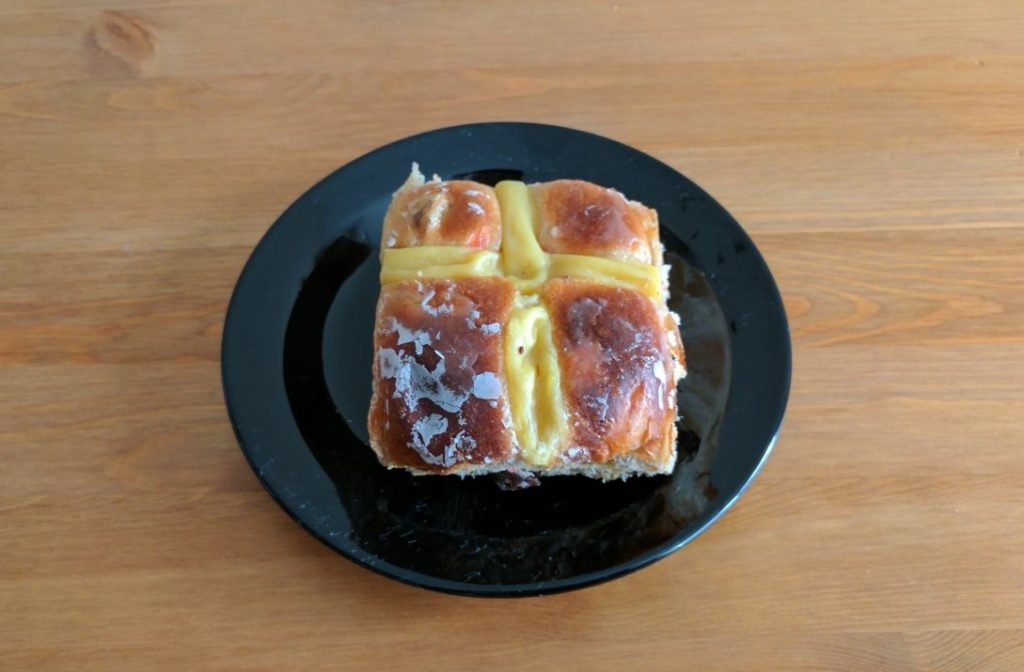 The glaze on this one is a bit different to the others. It’s a little bit like what we might put over finger buns in Australia. It also has the custard-like cross on it and mixed peel that includes the glace cherries. These are a very sweet option, and taste a bit like a cinnamon roll, so these are probably best eaten without butter. If you’re not into ultra-sweetness, maybe give them a miss. 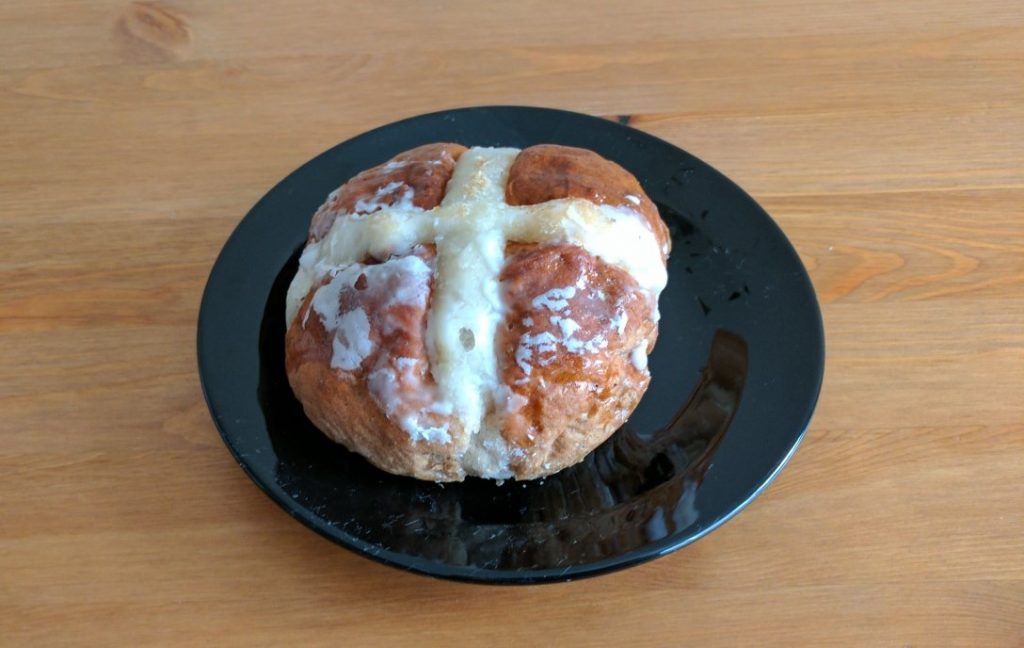 These buns are what Trump would refer to as UUUGGE! They’re pretty big. And if you’re looking for them in the shop, check the display window first. It’s a bit of a self-serve set up. These also have a finger bun-like glaze on them BUT they do have a proper flour and water cross on them, so points for that. Mine didn’t have any mixed peel in them, but the sultanas are nice and plump. To be honest though, mine was a bit dry and not hugely appetising. I wouldn’t go back for more.

Update, April 2020: Still open for take out only. And also has an online portal for ordering. 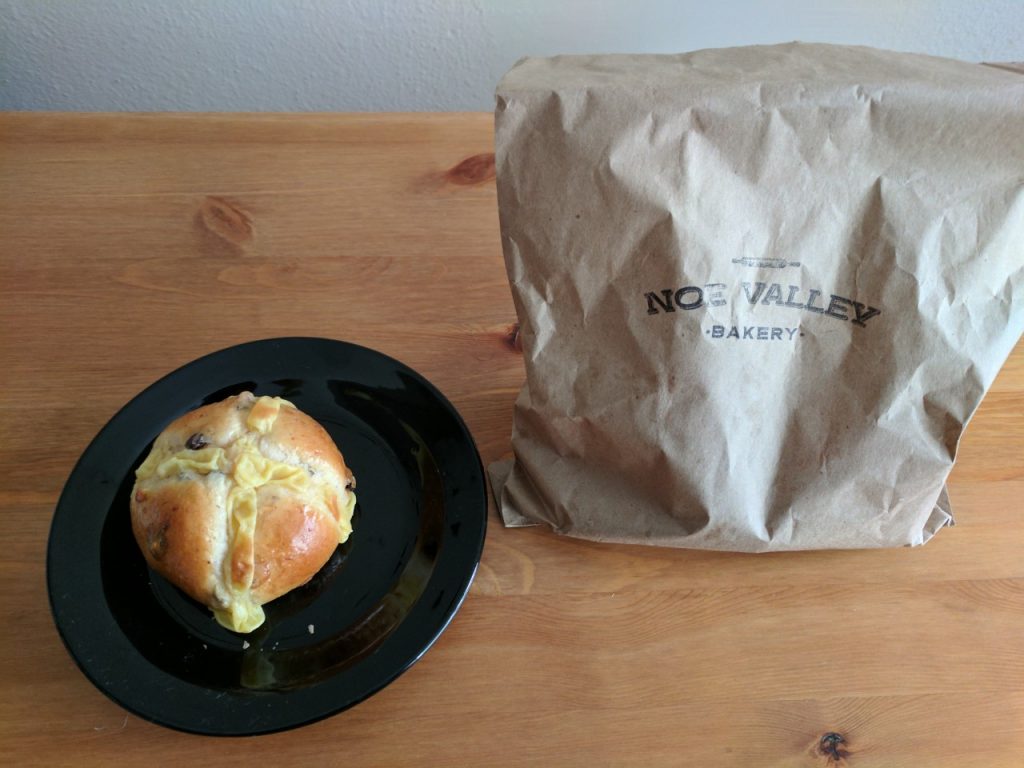 These hot cross buns are pretty small so you don’t get a lot of bang for your buck. It’s probably a reflection of the location of the shop, more than anything else.Having said that, they are the nicest-looking of the bunch and seem to have the same glaze we use at home. They also have more of a puffy custardy-cross. There’s no mixed peel but there are walnuts, which is a nice addition and the spice mix is so spot on! These are probably the closest I’ve come across in a bakery. If I had four thumbs, they’d be getting all of them.

While I was out feeding the city’s meters in an attempt to buy my way to nostalgia, Mr M was at home slaving away in the kitchen. 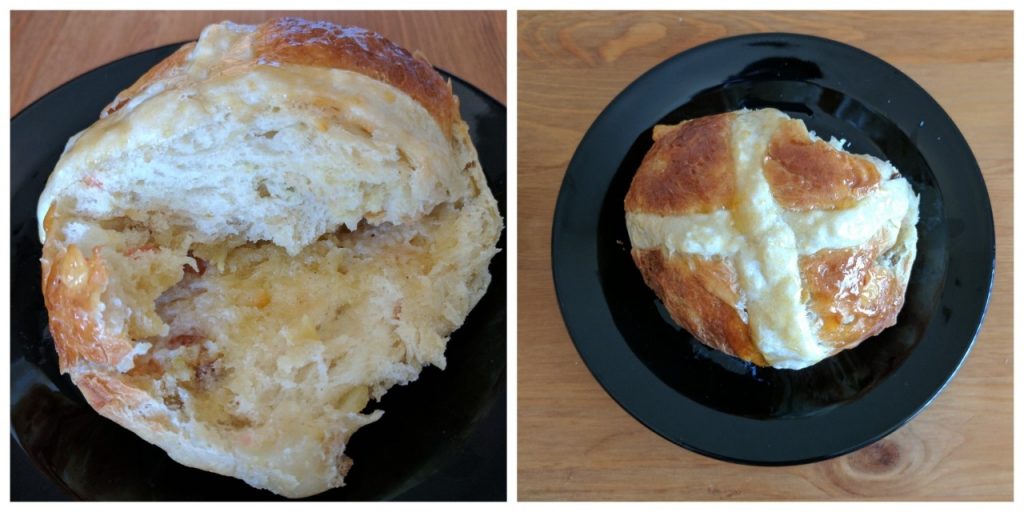 I am not well known for patience or skill when it comes to all things culinary, however, Mr M is one of those dudes who can open the cupboard, find five things in there and whip up a dinner without the help of a recipe. So he got cooking duties.

I will forgive him for using this recipe from BBC Good Food, mostly because I lived on those recipes when I was in London.

For those playing along at home, he used golden raisins in place of sultanas and bought the mixed peel off Amazon.

These were, by far, the best HCB’s of the day. And I can safely say that because right now, I’m lousy with them. They’re light, fluffy and the golden raisins are just like sultanas. I might have added some nutmeg or mixed spice to the recipe myself, but these buns are the bee’s knees.

Get yourself an American boyfriend (he doesn’t have to be yours, just borrow one for the day) and get him in the kitchen with this recipe.

Failing that, go to Noe Valley Bakery, you will not be disappointed! 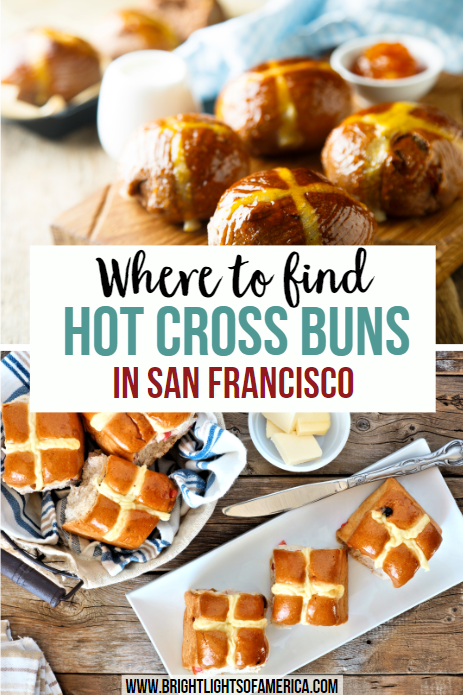