Bay to Breakers: A nudie run 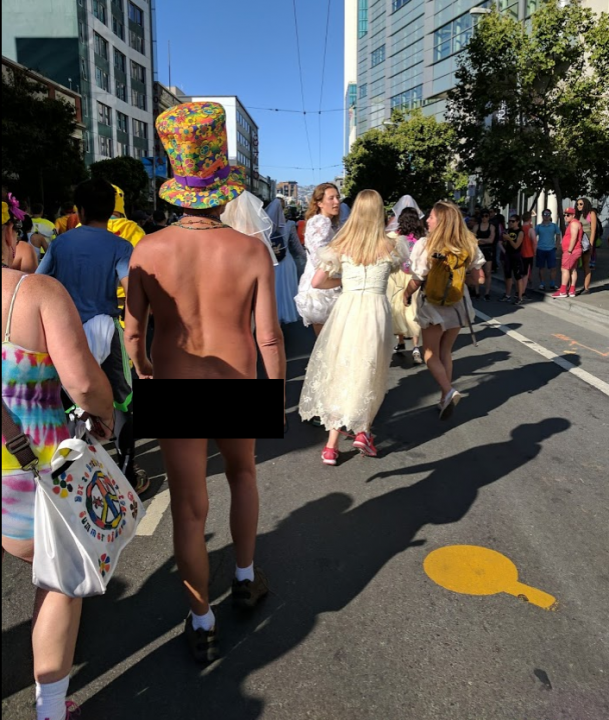 When I signed up for Bay to Breakers I didn’t realise that it has been run for more consecutive years than any other race in the world. I also wasn’t notified that people get nude whilst running it.

It wouldn’t be San Francisco without some form of getting-your-kit-off I suspect. Although this is highly unsettling news to find out five days before a race that you’ve already been quietly dreading.

What’s all this about tackles swaying in the breeze? It’s San Francisco baby!

Where else would nudity be allowed in parks and public places? Until 2012, it was perfectly acceptable to get completely nude and strut your stuff without fear of reprisal. Then public nudity was given the kibosh. The ban doesn’t impact Bay to Breakers though – the race is exempt from the law, so you can kick it old school to your heart’s content.

There is, however, one way to make sure your run counts and you’re not disqualified – wear your race bib at all times.

You don’t have to strip down to join the party though, there’s another, more sedate option. Get yourself a costume. According to stories passed down through generations of runners and revellers, the first costumed runner did the 1940 race dressed as a comic book character.

Since then, it’s turned into a riot of colour and fun. With superheros, a 13-person long centipede, tutus, chicken and panda costumes, human wine boxes, floaties and everything else in between. Let’s be honest, it seems like more of a party than a proper race. Which I’m completely fine with.

Obviously it’s all in the name. Bay to Breakers is run from the San Francisco Bay (The Embarcadero), through the city and Golden Gate Park for 12.01km (7.46 miles), to Ocean Beach. Where some eager runners go for a little dip.

In case you’re wondering about hills and elevation, or how much I’ll be torturing myself – here’s the elevation map. It’s mostly about the notorious Hayes Street Hill, it separates the men from the boys so to speak.

Clocking in at five blocks in length and 11 per cent grade, it’s safe to say that I will be well and truly owned by this monstrosity.

Courtesy of Map My Run

You’ve heard of the Great San Francisco earthquake that left parts of the city strewn with rubble and fighting conflagrations in April 1906. Bay to Breakers was a way of building the city’s morale after such a devastating event.

So on New Year’s Day of 1912, Bay to Breakers was first run, on the same route it is today, although it was known as the Cross City Race.

That’s Bay to Breakers for you. Are you running this year? Have you run it before? What do you think of a nude race? Should I find a last minute costume? There’s still time to register if you want to join!