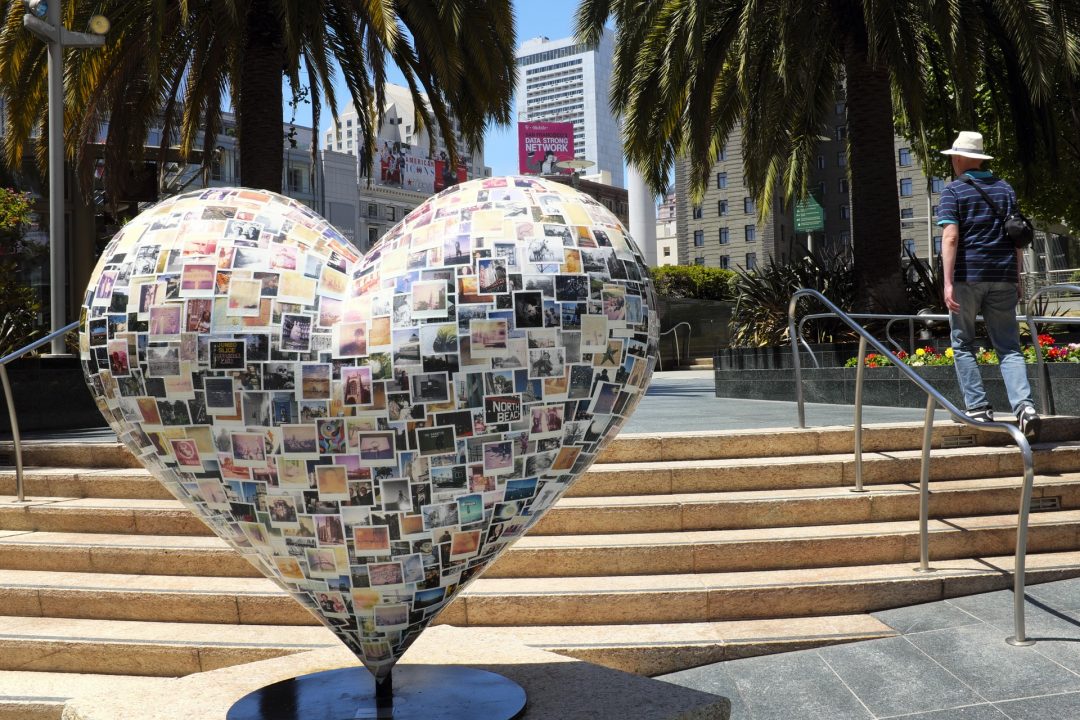 San Francisco is all about colour. The blue ocean, the red Golden Gate Bridge, the pretty pastel Painted Ladies, street art, and rainbows. Virtually everywhere you look is an Instagram-worthy moment.

But where are the best spots to let your camera or phone go nuts? I’m glad you asked, it’s all of these places!

Every time I try to get a nice shot of the #goldengatebridge it’s cloudy and/or foggy. Welcome to #sanfrancisco

Everyone knows that the most iconic symbol of San Francisco is the Golden Gate Bridge. There are heaps of great places to see it from, like Battery Point, Fort Point, Baker Beach to name a few. My absolute favourite spot to capture it from though, is the Golden Gate Public view point, high above the bridge and the city on the Marin Headlands. If you’re lucky enough to be there on a not too foggy day, you’ll get a great view of the bridge and the city laid out before you. Think of the fog as a smoke machine. If you get there and it’s on, it just adds to the drama!

I ❤️ these stairs so much. Not only because they’re beautiful and tucked away on 16th Avenue, but because it’s a representation of what community spirit can built.

San Francisco wouldn’t be what it is today without community art groups and projects. There’s more coming, but this is by far, my favourite. The 16th Avenue tiled steps was a mosaic and garden project that spans the steps between Moraga Street and 15th Avenue. They’re steep but I recommend climbing them because it’s difficult to take it all in from the bottom. 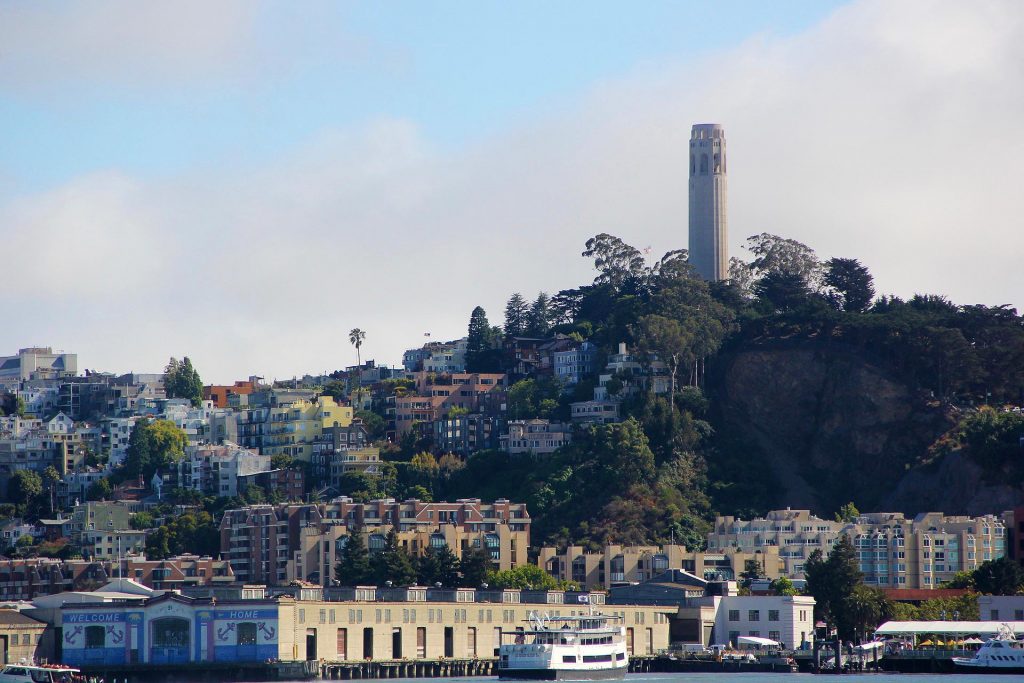 As you can see, Coit Tower is a great vantage point from which to photograph the city. It’s situated on Telegraph Hill, which also offers some fabulous view points. It’s a bit of a slog getting up there if you’re walking, but worth every second for the view.

Wondering how you can build up your credit history as an expat, so that you can afford one of these beautiful Painted Ladies? Check out the blog (linkinbio) today for lots of tips!

If you watched Full House as a child, then you’re familiar with the style of the Painted Ladies. The row of Victorian houses skirt Alamo Park and are a tourist flashpoint. They’re the real deal when it comes to iconic San Francisco housing. 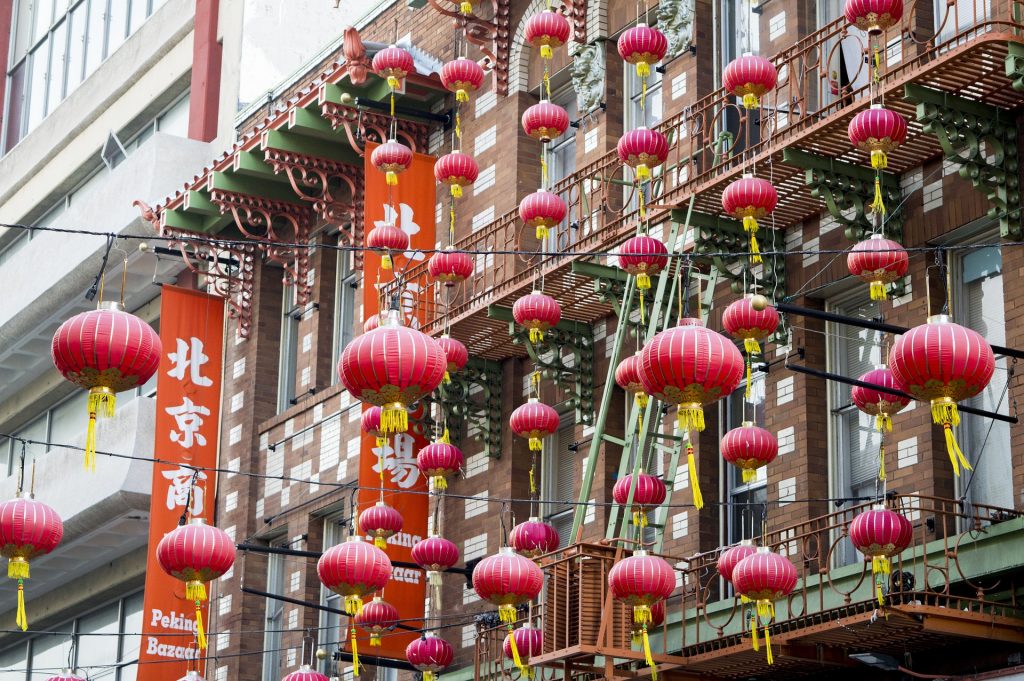 If crowds don’t bother you, head over to Chinatown for a different view of San Francisco. Grocers, dollar stores, souvenir shops and dim sum restaurants are crammed into Chinatown. But not as crammed as you’ll feel on the footpath. Don’t be scared away by the people, there’s always great things to see and photograph here.

Sometimes I remember how lucky I am to be living in San Francisco. There’s everything you could ever need and more. Plus some great Aussie’s around for company. What do you love about your adopted home?

Alcatraz is one of those must-do attractions, especially for film and history buffs. Keep your eyes peeled on the ferry ride over though. Apart from the seagulls gliding along in the ferry’s wake, you’ll catch some beautiful views of the city from the bay. Boats on the water, bridges spanning the divide between the peninsula and East Bay, and Alcatraz Island itself.

You can’t go past Castro District for colour, drama and excitement. Apart from the beautiful houses, which I’ve obviously fallen in love with, there’s always something going on. There’s Castro Theater, built in 1922, and rainbows every which way you look. The spirit of San Francisco lives in Castro.

Having a little lie-in this Presidents Day.

A trip to San Francisco isn’t complete without a visit to the Fisherman’s Wharf seals! Sure they’re just lazing around, soaking up the sun, but can you blame them? They’re in one of the best cities in the world! Really they’re waiting for you to whip out that camera and get a shot of them with the best looking backdrop around. 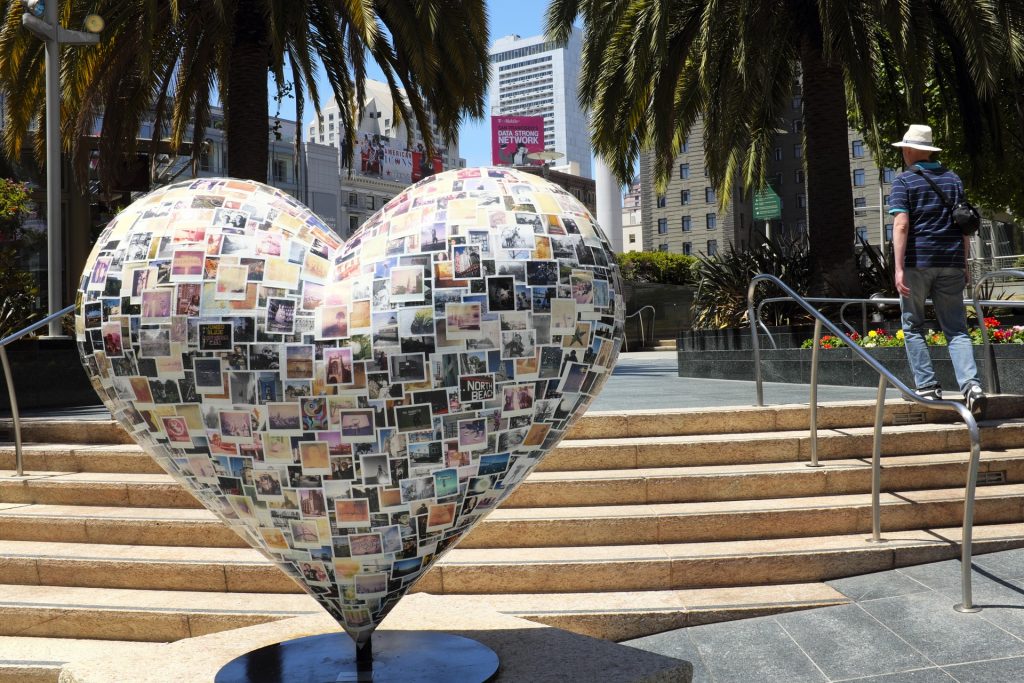 Union Square is basically the center of big name San Francisco shopping. Shops like Macy’s, Neiman Marcus, Louis Vitton and Swarovski all have presences there. There’s always something going on in the square, whether it be the giant tree and Menorah at Christmas time, or the San Francisco hearts.

San Francisco from above.

Want a panoramic view of the city stretched out before (and behind) you? Then you need to get yourself to Corona Heights Park. It’s only a short climb and you’ll feel like you’re in the clouds. This is also a great place to get the lay of the land so to speak. It’s easier to orient yourself when the city’s right in front of you just like a map.

San Francisco’s Golden Gate park is huge, and within its boundaries lie so many surprises. Like this waterfall we stumbled across yesterday.

Golden Gate Park is huge. There’s so much to see and photograph that frankly, you could easily spend an entire day in there. There’s the San Francisco Botanic Gardens, the bison, Fine Arts Museum complete with its own sculpture garden, windmills, and the Japanese Tea Garden. You could also stumble across this waterfall, like I did while running Bay to Breakers! 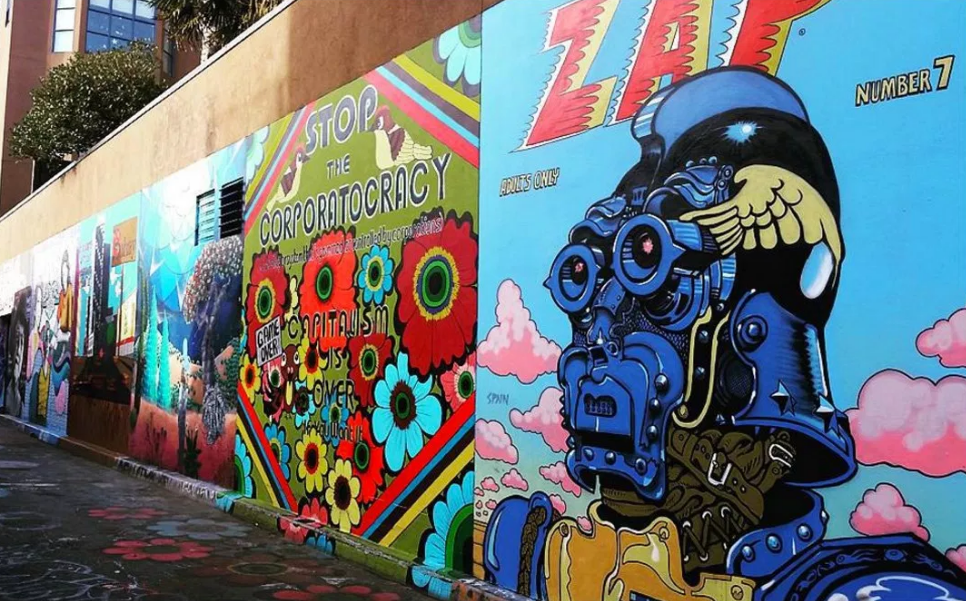 It’s not San Francisco without awesome street art, and Clarion Alley in Mission is the place to go to find it at its best. The Clarion Alley Mural Project is a community group run by artists and uses public art as a voice for the marginalised.

I mentioned that the list of spots to capture the Golden Gate Bridge from is long. This is another of them, although that’s not the angle I chose for this shot. Lands End kicks butt for views of the East Bay, the bridge and it’s a great little hike up to Sutro Baths, which isn’t too shabby in terms of views either. Plus, you get a labyrinth to boot!

Some structures just make your jaw drop every time that you visit them. The Palace of Fine Arts is like that for me. What’s your fave jaw-droppingly gorgeous landmark?

This is one that you’re not going to want to miss, guaranteed. The Palace of Fine Arts was first constructed in 1915, then rebuilt in 1965. With its own artificial lagoon, this is one grand “pergola”, completed in a style that wouldn’t be out of place in Europe.

I never get sick of the San Francisco Bay. There’s always new vantage points to capture it from. Where’s your favourite place to watch the bay do its thing?

Let’s be honest, Battery Point, Fort Point and Baker Beach are usually crowded because everyone wants that Golden Gate Bridge shot and they’re the easiest ways to get them. But if you’re willing to drive a little further, you can still get an awesome shot of the bridge, and the bay on a beautiful day.

MAPS TO GET YOU THERE 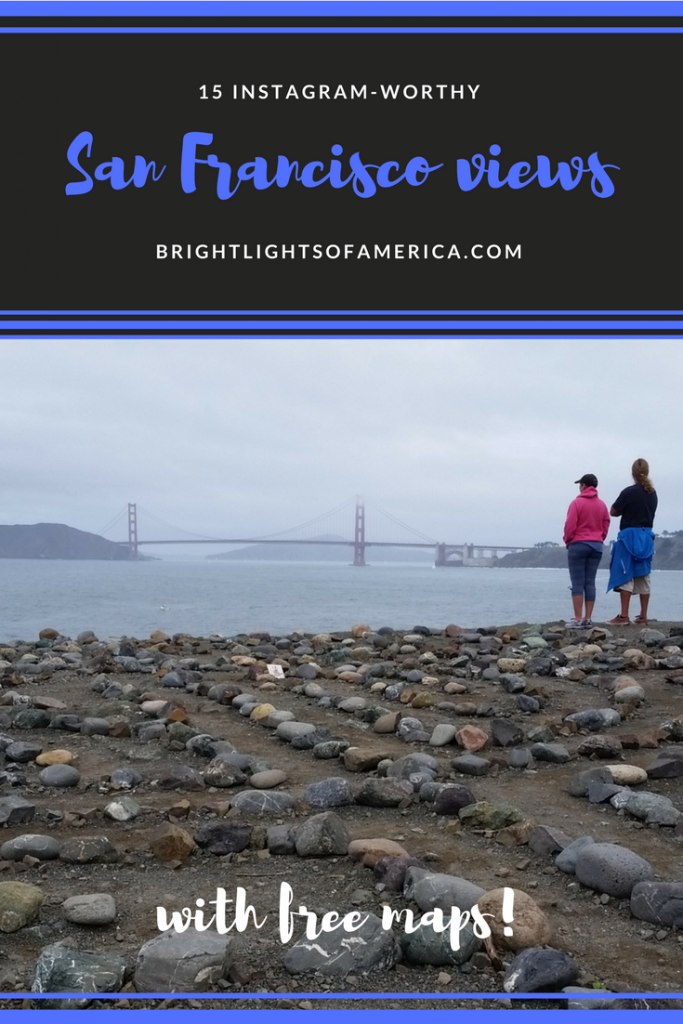