How to spend 2 days in Los Angeles 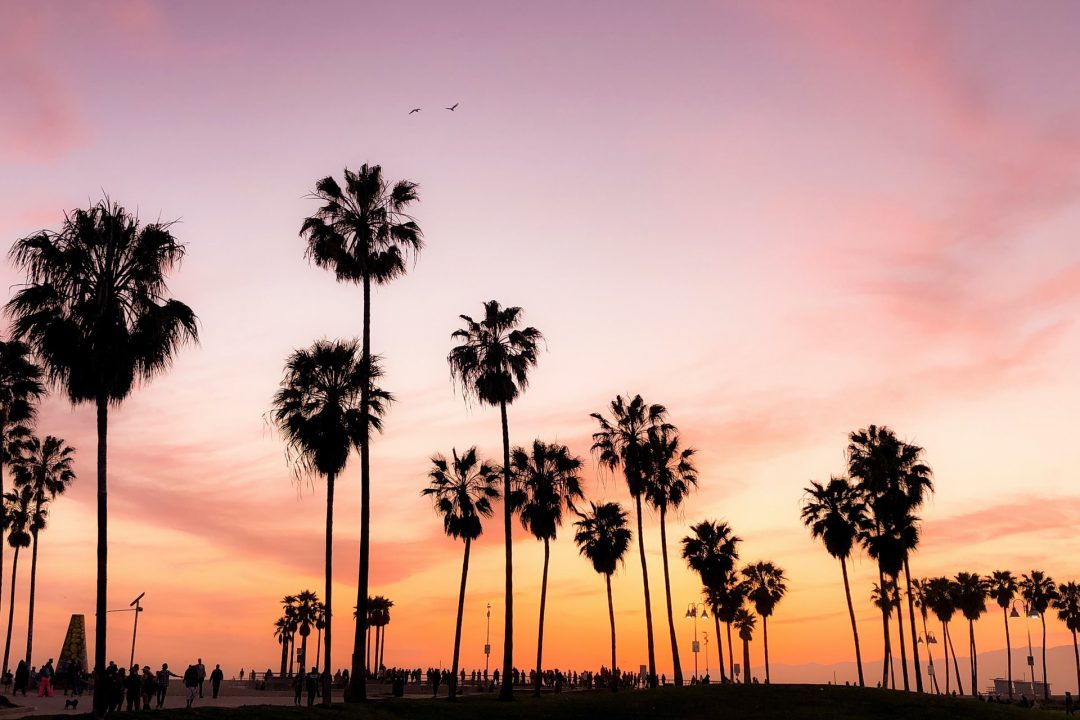 Taking advantage of long weekends for road trips is an American art form. You’ve got to squeeze as much joy out of those few days as possible without using up your other precious paid vacation days. So spending 2 days in Los Angeles was high on my bucket list.

Our most recent holiday weekend (as they’re called here) was spent soaking up the sights and sounds of Los Angeles. Also the smells. So many smells. I’m going to level with you up front: Los Angeles wasn’t one of my favourite places in the US, which isn’t to say that I didn’t absolutely love parts of it. But I suppose it’s more of an indicator that the atmosphere of Los Angeles isn’t quite my cup of tea.

Frankly, there are always going to be places that you visit, that you just don’t click with. That doesn’t mean that they aren’t worth visiting though.

If, like us, you drove or flew in the night before, you’ve had some sleep and you’re feeling fresh and ready to get out and about. There are a couple of options here, depending on what you’ve seen/done previously.

Post Updated, May 9, 2020: Since writing this post back in 2017, we’ve visited Los Angeles again, and I’ve had time to update this post with even more things to do in Los Angeles!

It’s almost impossible to spend 2 days in Los Angeles without visiting one of the many theme parks in the area. If you’ve already been to one, don’t worry, there are plenty of others to pick from. Here are a few to get you started! 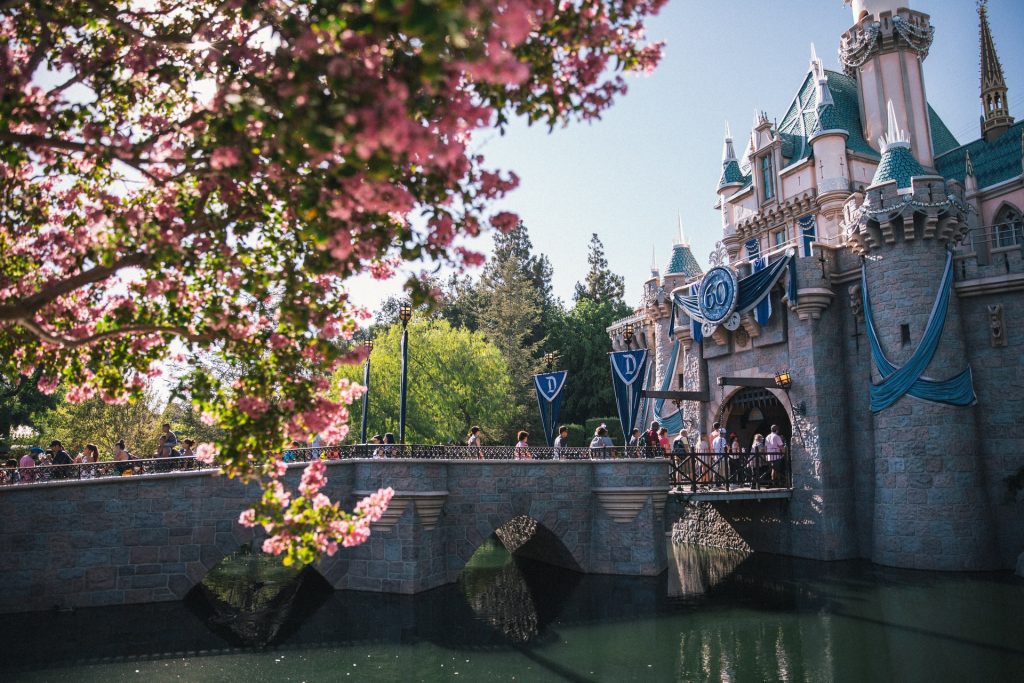 Start with the most magical place on earth. You won’t regret it. Picture: Avel Chuklanov.

If you’ve never been to Disneyland before, it’s a must. Even if you don’t have kids and are feeling a little skeptical about the whole idea, do it anyway. I was a little on the skeptical side to be honest. I wasn’t sure that spending an entire day of a short trip at Disneyland was the best idea, but I had an absolute blast.

It brings out the best in people I think – obviously not waiting in line for rides (but even that wasn’t bad when we visited) – but there are smiling faces everywhere. There’s something for everyone – the thrill seeker, the Disney nut, the SciFi enthusiast, and kids of all ages.

Get your fill of films at Universal Studios 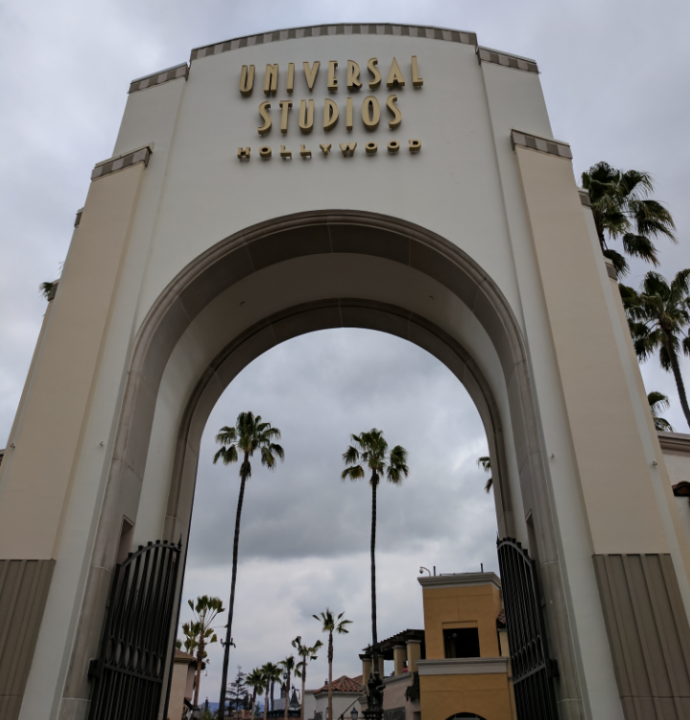 Don’t miss Universal Studios Hollywood, to get a glimpse of cinematic magic.

If you’re not keen on Disney or you’ve been there before, then you may want to consider Universal Studios instead. This was a Los Angeles must for me, if only to visit The Wizarding World of Harry Potter. 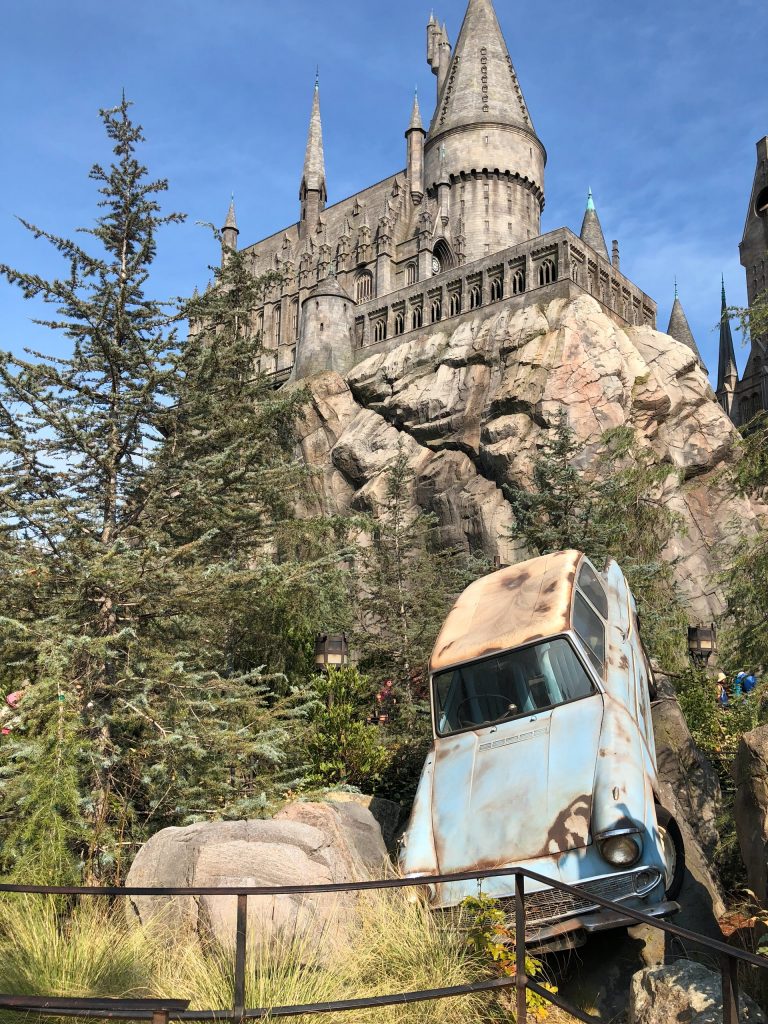 Visit the Wizarding World of Harry Potter for more than a touch of magic. Picture: Alden Maben.

The town, modeled on Hogsmead, is all things Harry Potter. Complete with the steam train, the Weasley’s car, Hogwarts and all the shops and alehouses that are familiar from the books. You can even go into Ollivander’s and pick out your own wand or watch as a wand picks its perfect owner.

Take the studio tour for an in-person look at how special effects are created and film sets constructed, check out WaterWorld, Springfield, Jurassic Park and a bunch of other sections.

Get your adrenaline pumping at Six Flags Magic Mountain 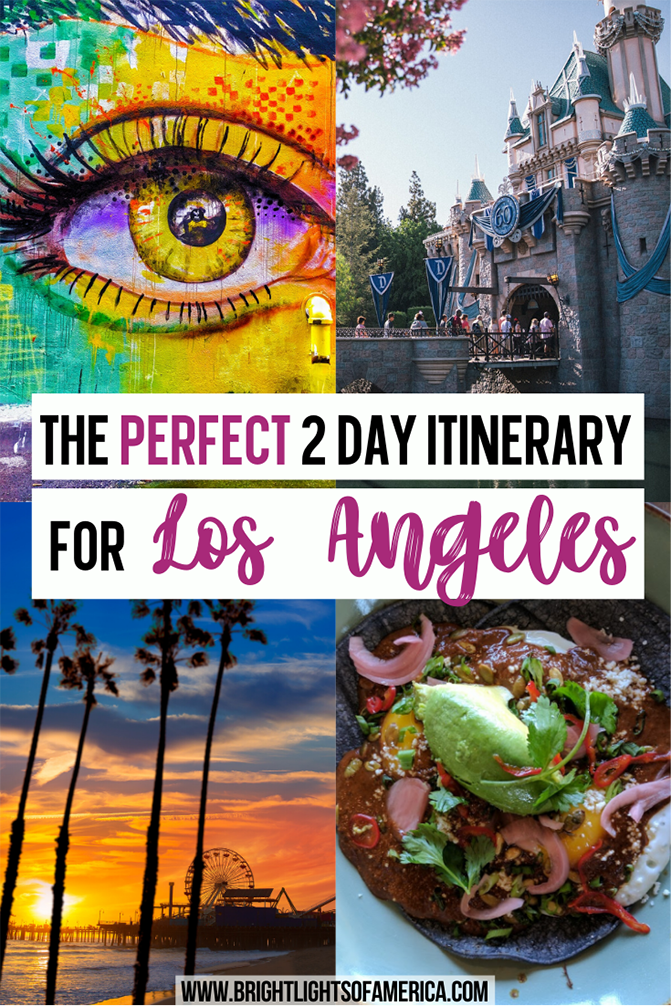 Six Flags Magic Mountain is for adrenaline fiends who want the thrills of fast roller coasters. Just make sure you’ve got a strong stomach if you plan to tackle all of the roller coasters in this theme park.

Much like it’s Northern California sister, Six Flags Magic Mountain is known for its coasters. This park has CraZanity, a 17-storey tall pendulum, the Apocalypse coaster, which speeds you through a post-apocalyptic wasteland, and BATMAN The Ride.

There are a selection of family friendly rides like bumper cars, a pirate ship, and Jet Stream, a classic flume ride. 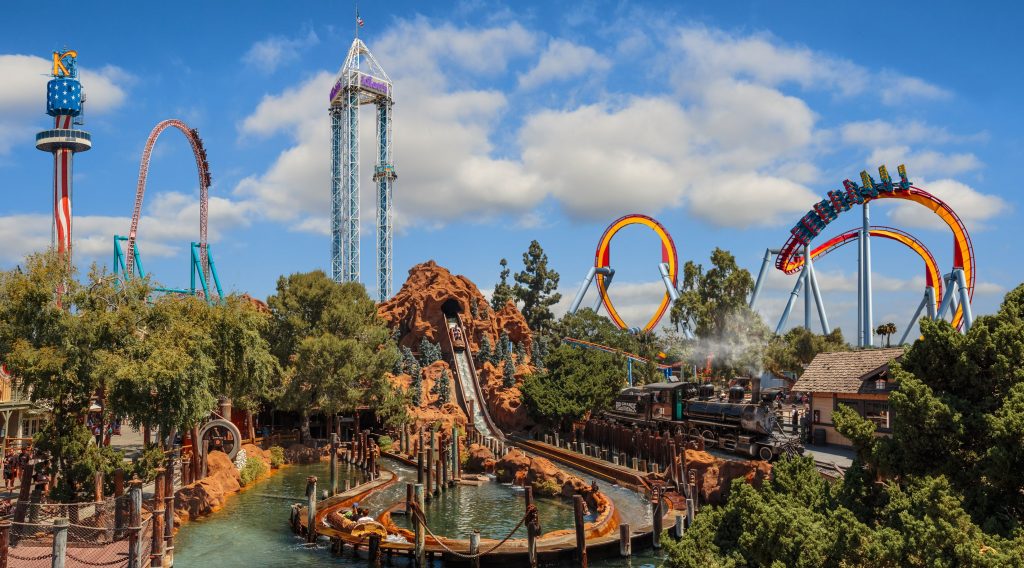 Confession time: When I was a kid growing up in Australia, and reading American books like The Baby-Sitter’s Club, I thought that Knott’s Berry Farm was a farm where you went to pick berries.

It turns out, this theme park started as a berry farm, before it grew into a theme park that burgeoned from an Old West ghost town, and some very famous fried chicken.

Nowadays, it is also home to Knott’s Soak City Waterpark, which is a great way to cool down on a sweltering southern California day. Some of the best things about this park are the fact that admission prices are way cheaper than the bigger parks, and wait times are shorter for rides.

Experience a carnival at Pacific Park 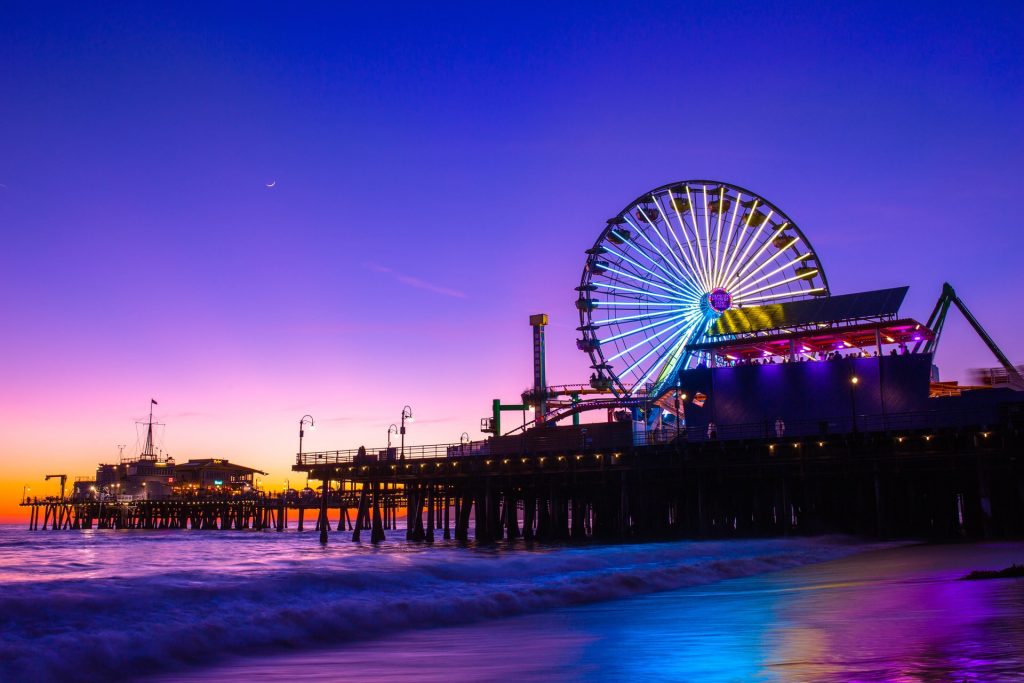 A trip to Pacific Park is part of a quintessential visit to Santa Monica. Picture: Scott Trento.

Right on the water in Santa Monica, you can experience the carnival atmosphere of Pacific Park.

This one is located right on the world-famous Santa Monica Pier, and it includes rides like the West Coaster, and Pacific Wheel, which is touted as the world’s first solar-powered Ferris wheel.

You’re not going to spend all day at Pacific Park, an hour or two will probably do, but you can round out your day by hanging out at Santa Monica beach.

Build a day at Legoland California 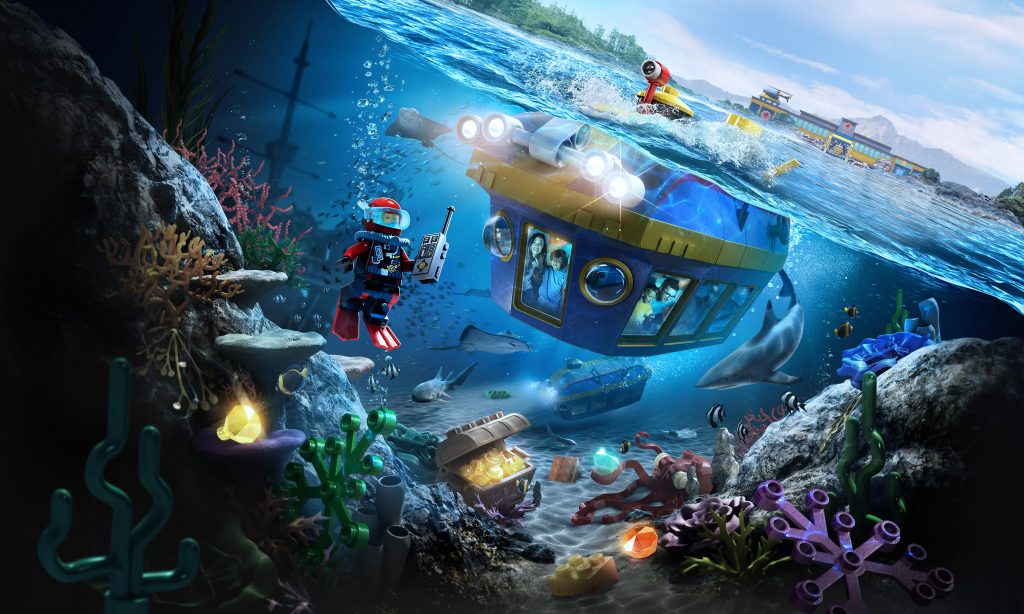 Let’s be honest, you’re probably going to need a kid or two in order to really love your time at Legoland. Or maybe I’m wrong, and you only need to be a kid at heart.

The park celebrated it’s 20th birthday in 2019, and has unveiled a new section called “The LEGO Movie World”. This part of the theme park takes adventurers to Bricksburg, from The LEGO Movie, and to a ride called Masters of Flight, where guests get to ride Emmet’s triple decker flying couch. 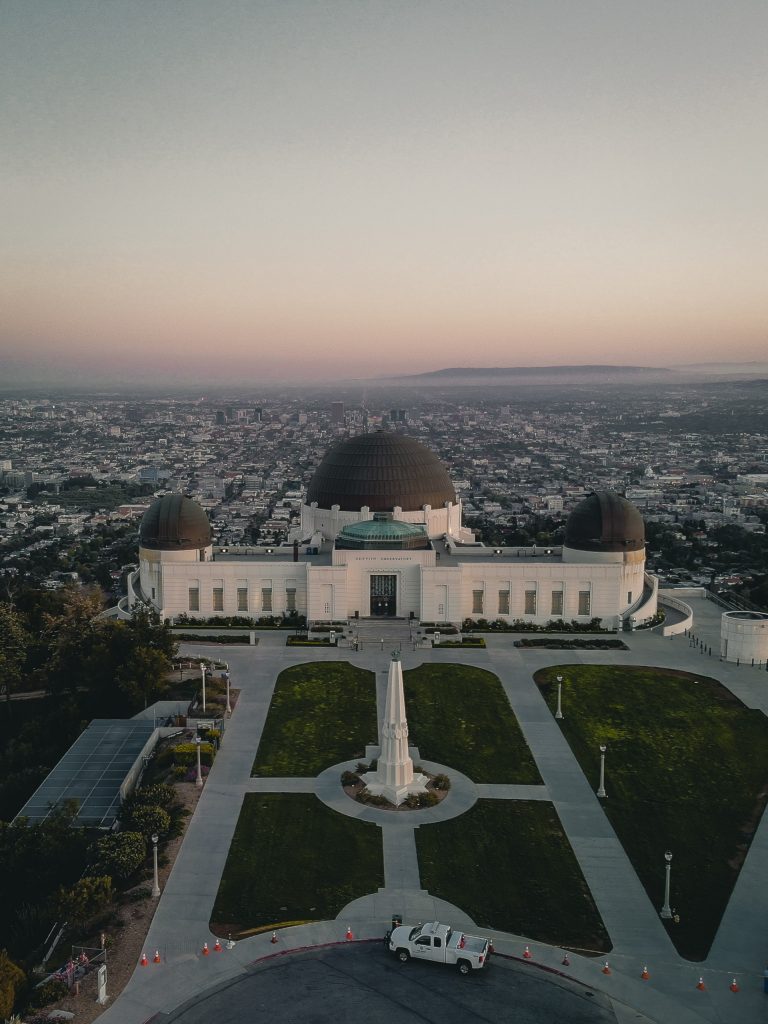 While I’m sure it’s possible to spend your entire day at Universal Studios, we took advantage of the proximity to Griffith Park Observatory later in the afternoon.

The observatory is situated on top of a hill in Griffith Park, so you’re going to want to drive in or take the DASH Observatory bus, which runs every 20-25 minutes and costs about 50 cents. Now, the reason to get here during daylight hours is for the the view, not only of Los Angeles but also of the Hollywood sign.

If you’re all about getting that classic photo of the sign, this is where you want to snap it from. Plus it’s a beautiful building in its own right.

Hopefully you’re not all partied out from all of those rides and standing in line. Because we’ve hit the Hollywood portion of our Los Angeles guide and this one’s going to be a big day. 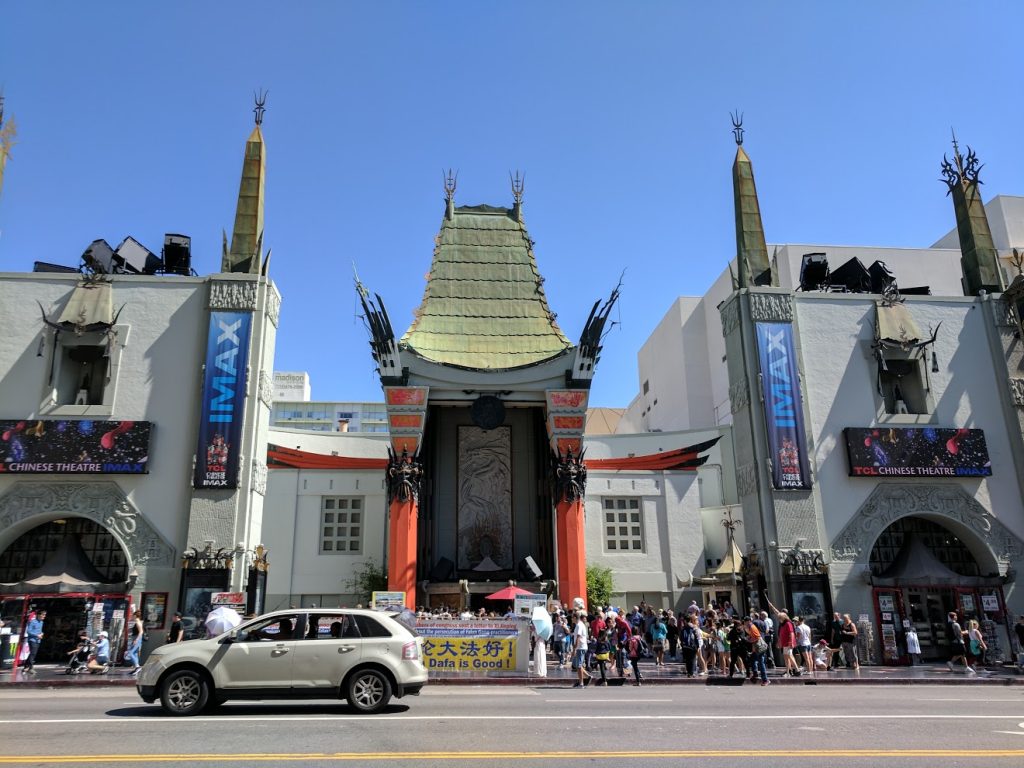 Grauman’s Chinese Theater is one of the best parts about Hollywood Boulevard.

This didn’t quite live up to the hype I’d put on it, or the way Anne M Martin described it in The Baby-Sitter’s Club books. Wow, two mentions of the same pre-teen book series. I must have really loved it.

Hollywood Boulevard is great for the Walk of Fame stars and the TCL (Grauman’s) Chinese Theater, but apart from those it’s all a bit dingy to be honest.

You can tour the Chinese Theater, which first opened in 1927 with a showing of Cecil B. DeMille’s film The King of Kings. Today the theatre forecourt hosts the hand and foot prints of some of Hollywood’s most celebrated actors and at least one hoof-print of a Hollywood horse. 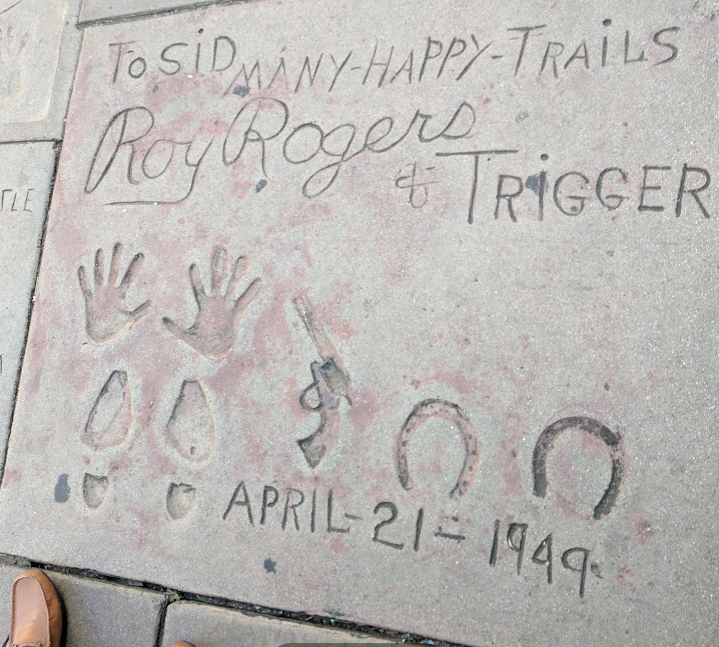 If you didn’t get a chance to see the Hollywood sign yesterday, you can catch it from the second floor balcony of the Hollywood & Highland Mall.

Enjoy art at The Broad 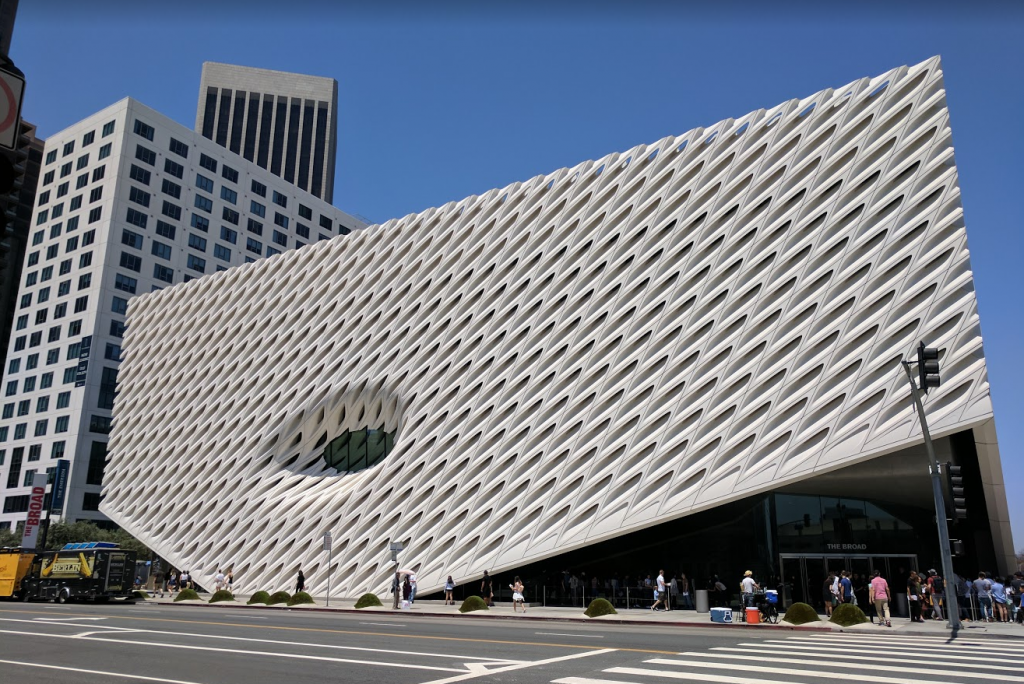 The Broad is beautiful inside and out, and the building cost an estimated $140 million to build.

Now it’s time for something a little more highbrow. The Broad contemporary art museum opened in September 2015 and there are still considerable lines to get in even though general admission is free.

The $140 million building itself is a work of contemporary art that has to be experienced in real life to fully appreciate it. The museum was founded by Eli and Edythe Broad, and houses their 2,000-piece collection that spans the decades from the 1950s onwards.

Because of its popularity, you can reserve your free tickets from The Broad website, when they are released at the beginning of each month, or you can try your luck by waiting in the “stand-by” line outside the building. 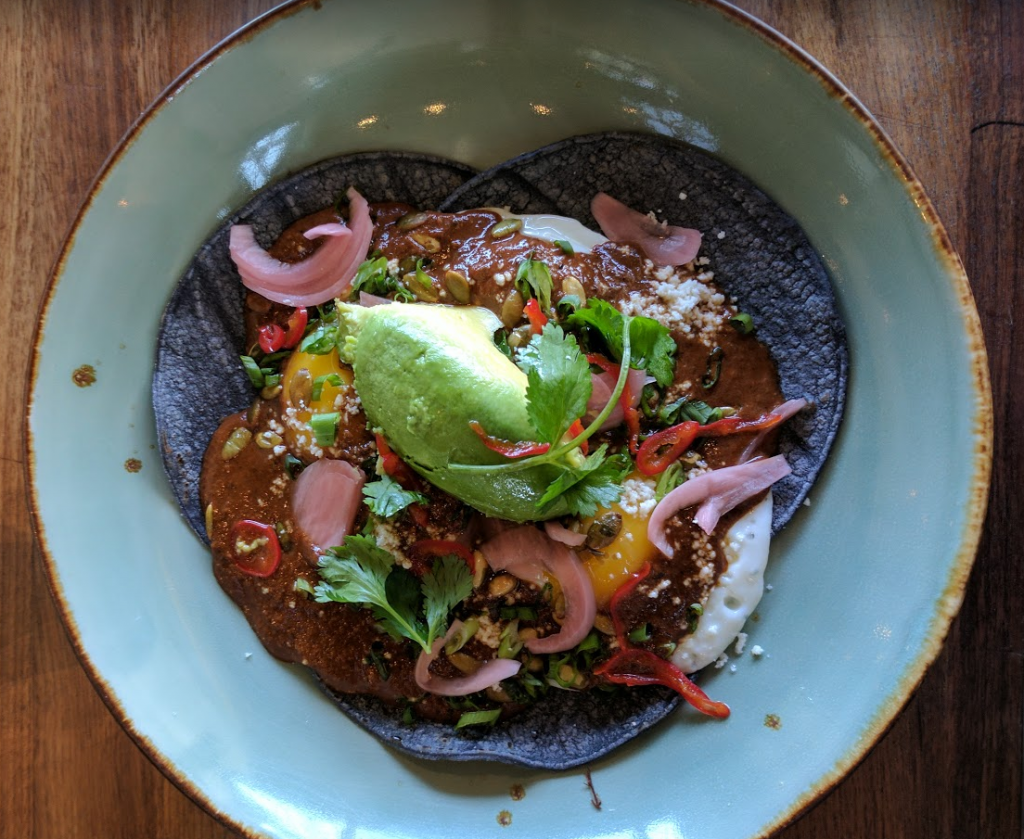 If you weren’t able to get into The Broad, (or maybe you did) you must be hungry by now. To the museum’s left, next to the little courtyard you’ll find Otium La – a hipster restaurant down to the denim aprons of their servers.

I hold a special place in my heart for all things hipster, so don’t think that’s a negative thing. It’s a beautiful spot with an open kitchen, courtyard and it’s own glassed wine room. It even has its own garden, where it grows some of the ingredients used in the rustic dishes.

I am not one of discerning tastes (ie I’ll eat just about anything you put in front of me) but Mr M doesn’t just give out compliments willy nilly. We ate off the brunch menu, I chose the Mole (pictured above) and Mr M got the Chicken with potato, onion, shishito and aji verde and was extremely impressed. 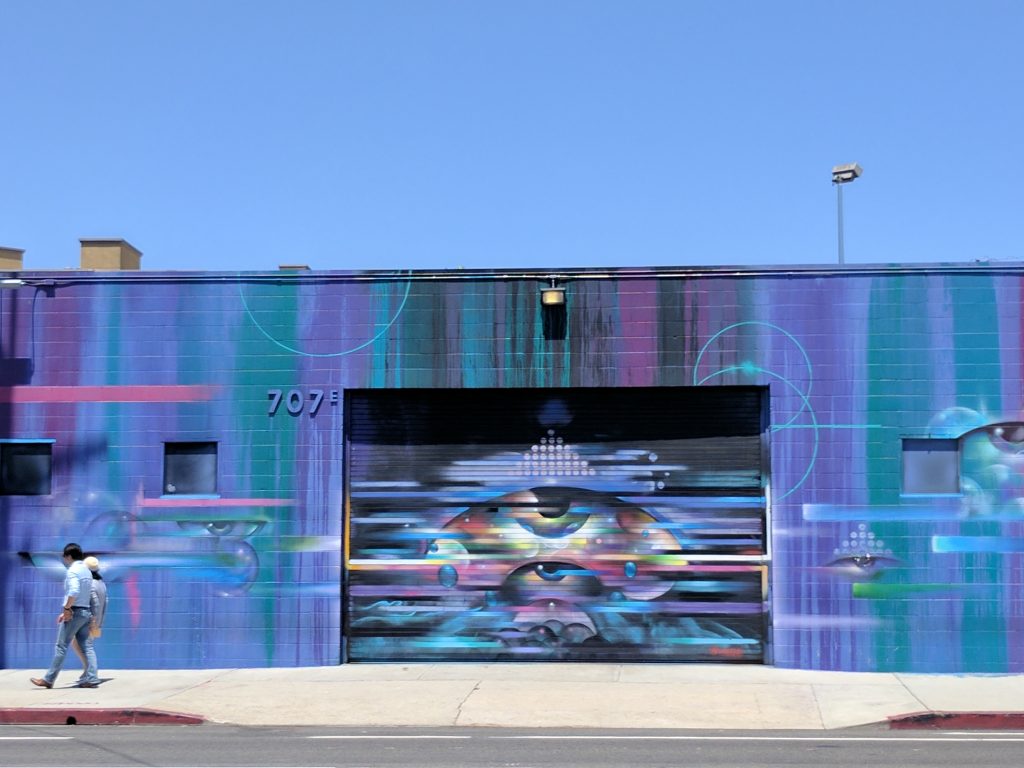 There is plenty of street art to gaze at throughout the LA Arts District.

We were lucky enough to visit Los Angeles while the Museum of Ice Cream was open, so we walked off our lunch through Japantown and the Arts District. I totally recommend walking through the Arts District for the street art.

Because we had somewhere to be, we didn’t get to see all of it, in fact, I’m not sure that we even scratched the surface. But we saw some spectacular murals and examples of how a district of warehouses and mechanics can transform itself into a beautiful area full of art for everyone to enjoy. 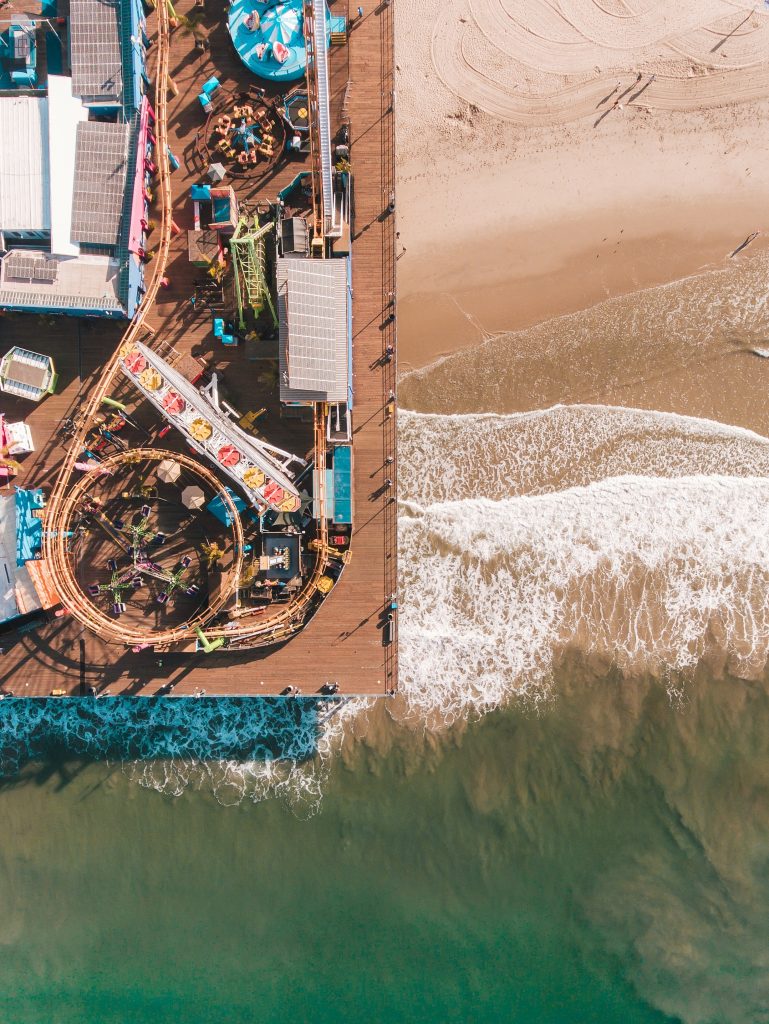 Sit back and watch the sunset, or maybe hop on the Ferris wheel for a better view. Picture: Matthew Lejune.

There’s no better place to enjoy a sunset than at the beach and Santa Monica’s Pier means you get to hang out after dark for some rides and games too. That’s if you didn’t already visit yesterday.

If you visit during summer you can also catch a Twilight Concert or two by bands like Miami Horror, Warpaint and Eric Burdon & The Animals or solo artists such as Mon Laferte.

Ride on the historic carousel, the iconic Ferris wheel and roller coaster, or learn some moves at the trapeze school. Then grab something from California’s famous food trucks and your two days in LA are complete! 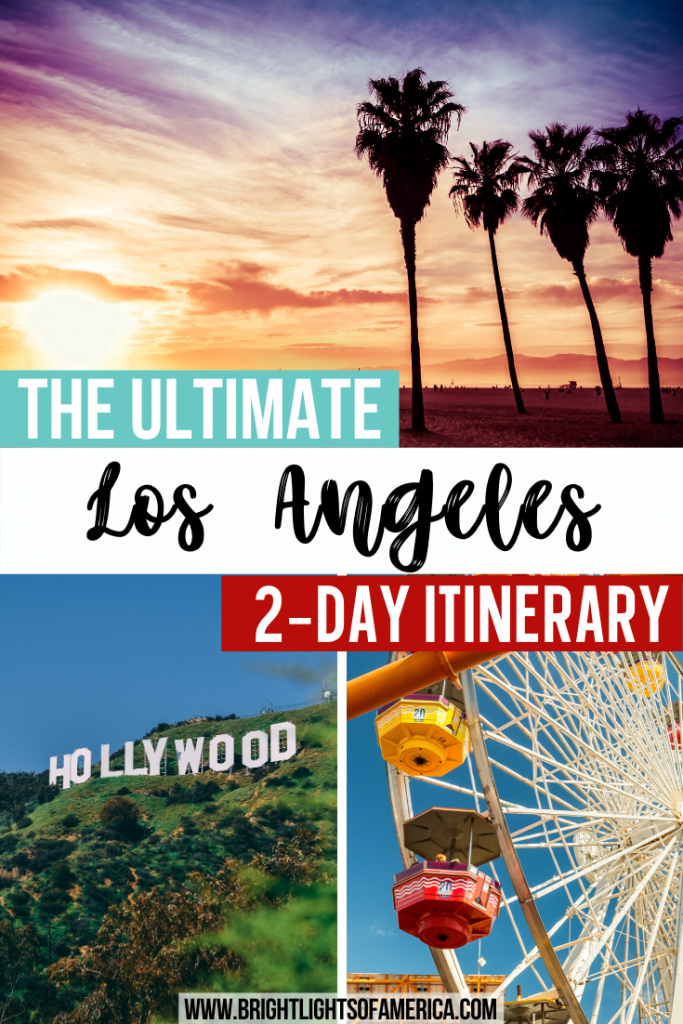