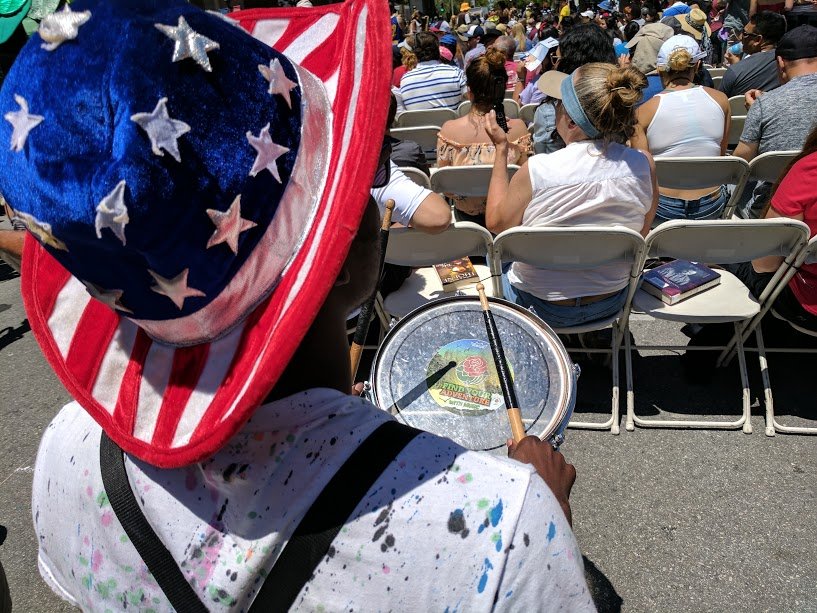 The Redwood City 4th of July Parade was my first, and so far only, taste of the Independence Day holiday in the US.

If you don’t already know, the day marks America’s independence from the British more than two centuries ago.

It’s celebrated with parades, fireworks and more star-spangled clothing than you’d see in all the world’s circuses combined.

I waddled down to the Redwood City 4th of July parade, celebrating its 79th year, to witness the fun for myself. 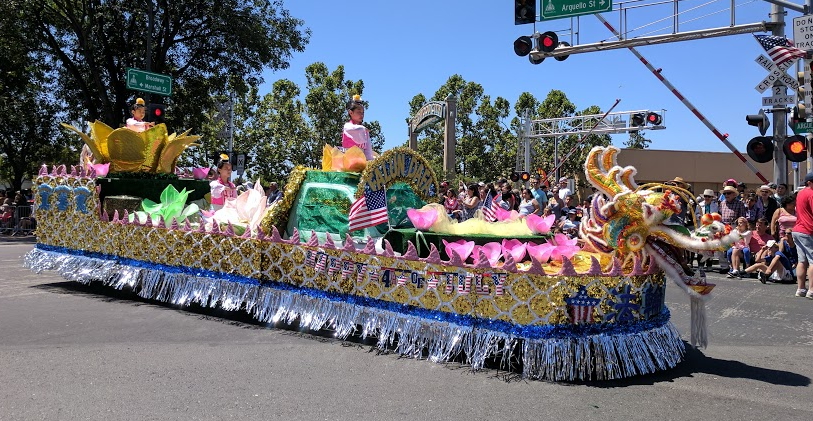 What’s a parade without some sparkly floats? This is Falun Dafa’s contribution.

I challenge you to be this peppy after performing a whole parade’s-worth of dance out in the summer sun. You can’t! But Studio S Broadway Academy of Dance-rs did. 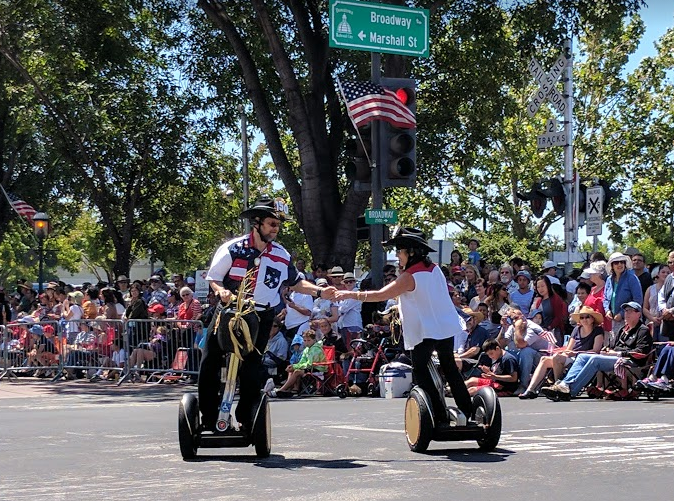 The Electric Power Segway Dancers are available for your next party! 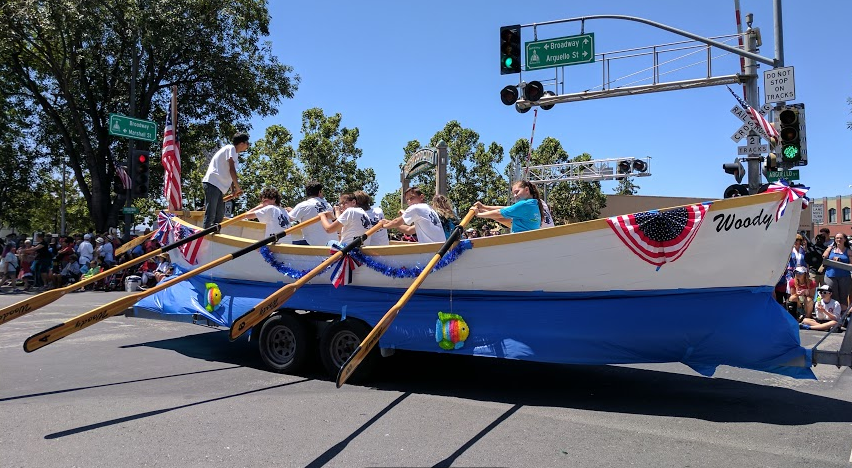 The Gryphon Crew teaches teens nautical skills and teamwork aboard an army transport vessel from the Korean War. Obviously not pictured here. Woody’s the land-transportation. 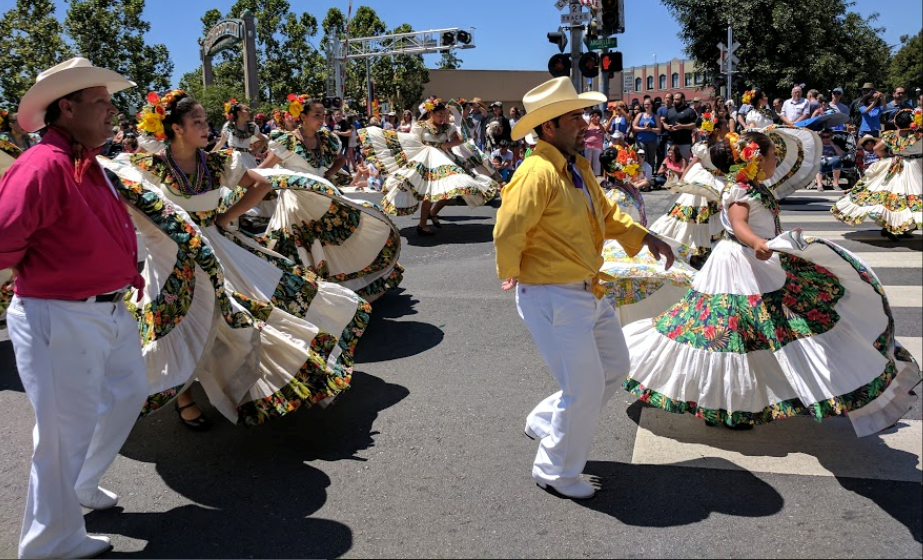 The dresses on the Grupo Folklorico – a Mexican dancing troupe – took my breath away. Great costumes and dancing. 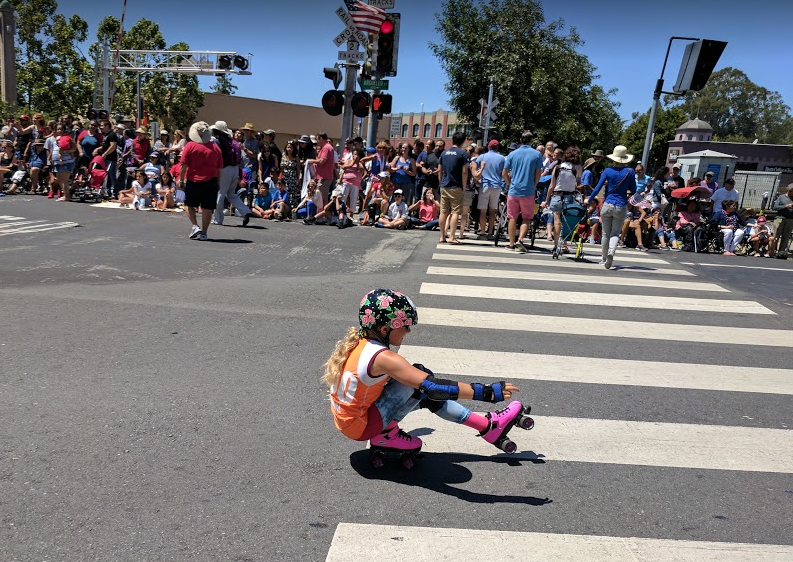 It doesn’t get much cooler or tougher than roller derby. And the Peninsula Junior Roller Girls (The RollerQuakes) were out showing their mad skills! 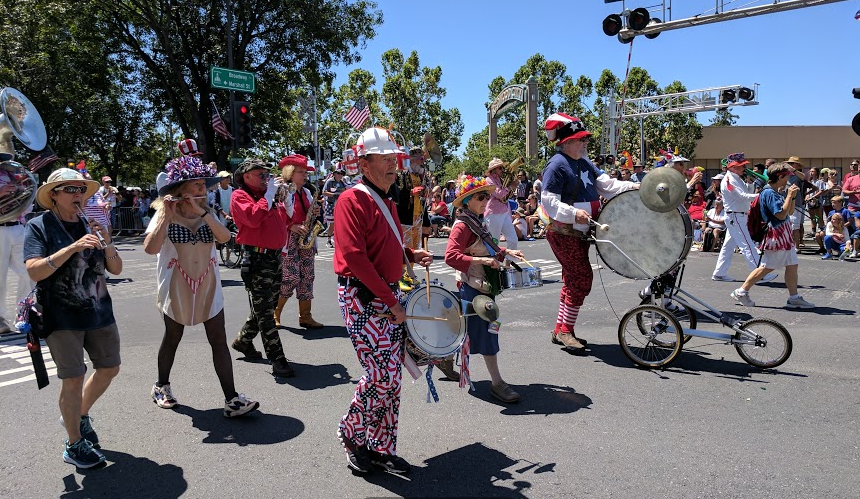 Nothing I can say will do the Los Trancos Woods Community Marching Band justice. From the costumes to the dancing to the music – putting California into 4th of July. 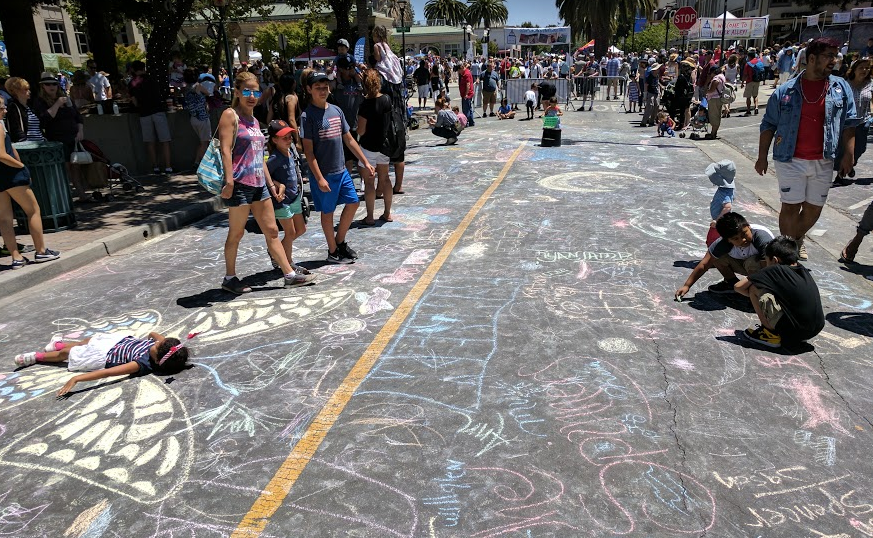 There’s never been a better time to draw on the road in chalk. 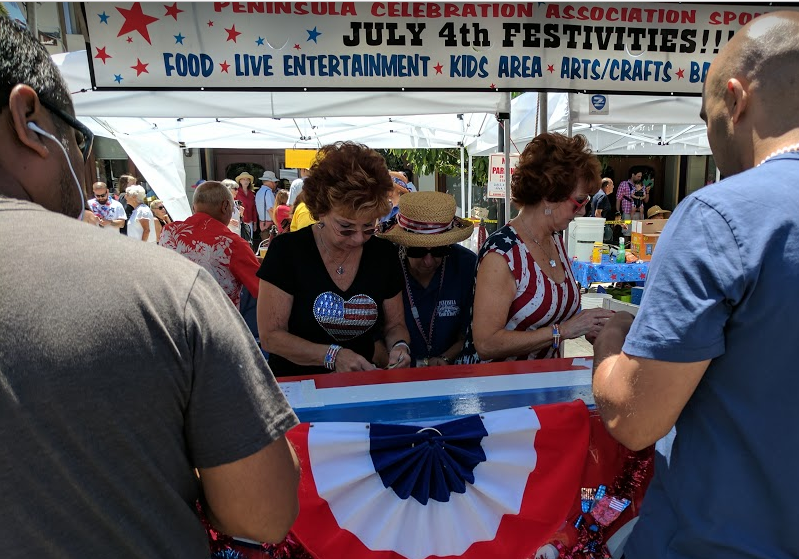 Wear your flag, loud and proud. The busiest drink sellers of the day! 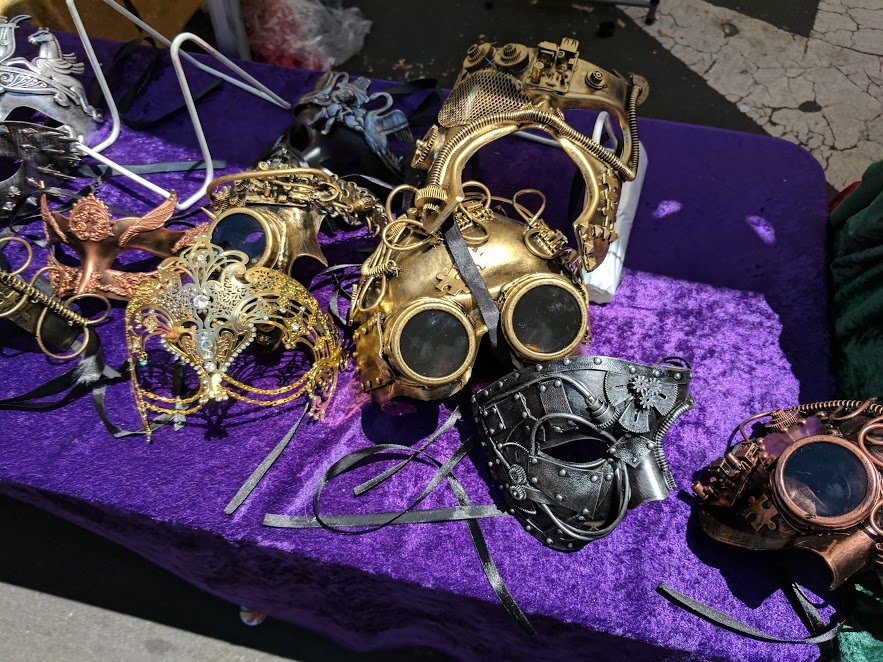 Where else would you go to buy steam punk masks? 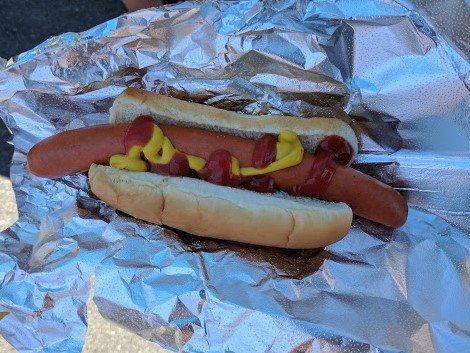 We all need an Independence Day hot dog. 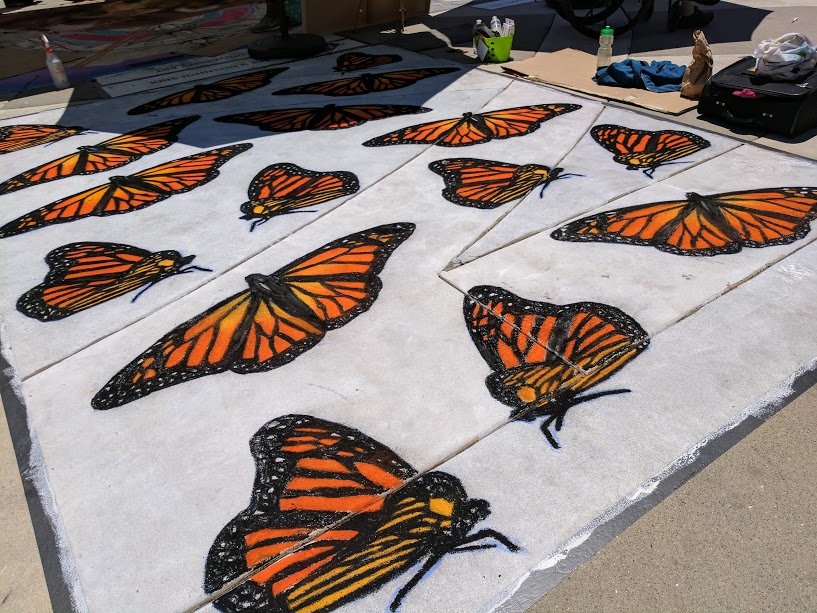 Chalk art from the professionals. This one’s called Entropy and is by Bianca Nandzik. She’s the lead artist at Cultivative, a non-profit that helps people discover and explore creative arts, science and technology. 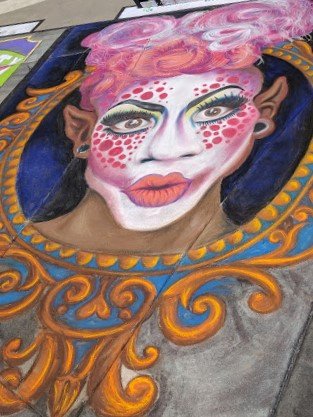 Chalk art that screams San Francisco by @ChalkRiot, which is a group of artists. Unfortunately I didn’t catch the name of the artist who completed this masterpiece.

Last, but not least is the battle of the bands between UC Davis, above, and Stanford University. I had so much fun.

Linking with Our World Tuesday. 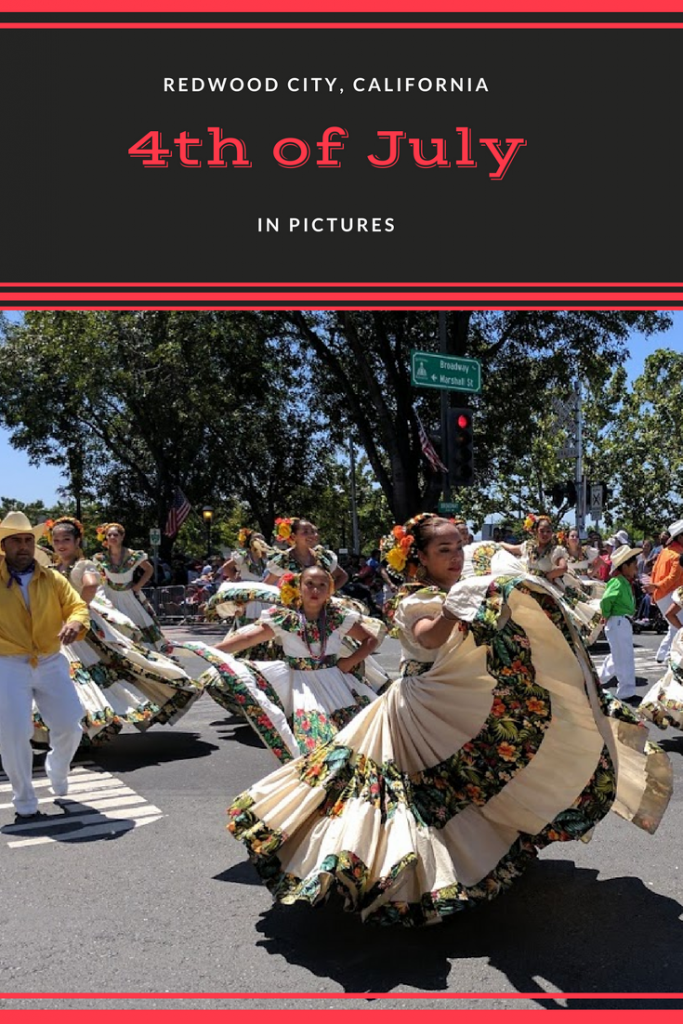