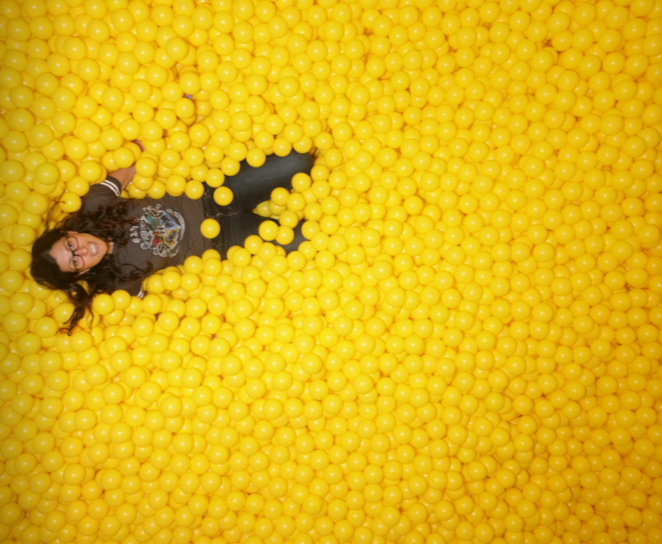 The Color Factory is where you experience all the hues of the rainbow with more than just your eyes.

From the first room to the last, you smell colours, taste them, play in them and listen to them.

For the spelling aficionados playing along at home, it’s Color Factory by name and colour by nature. That’s all I’m going to say about that.

I went to the San Francisco Color Factory a few months after visiting the Ice Cream Museum, ready for another experience to make me feel like a kid again. And I was far from disappointed.

The Color Factory is everything you’d expect from a building dedicated to pigment. Worshippers of black and white are welcome, but might be overwhelmed by the rainbow connection inside.

For want of a better term, let’s call it orientation. When you file into the building it’s down a flight of stairs and into a rainbow-striped room to a bright yellow desk. 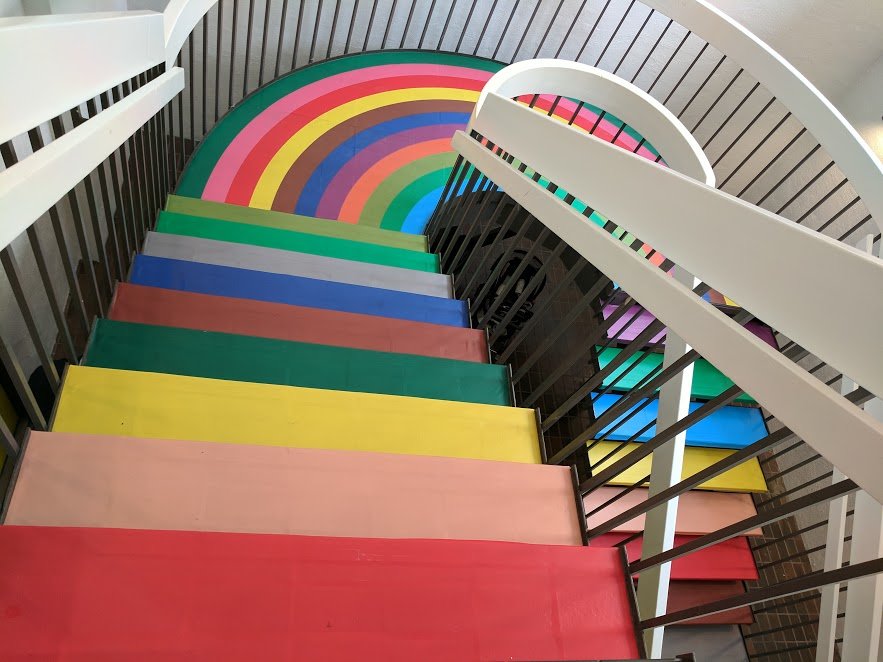 Once your ticket is scanned it’s onwards to one of the most interesting tasting and smelling rooms of the entire factory.

But first logistics. Add your name and email address to the tablets along the wall and scan your very own Color Factory ID card. 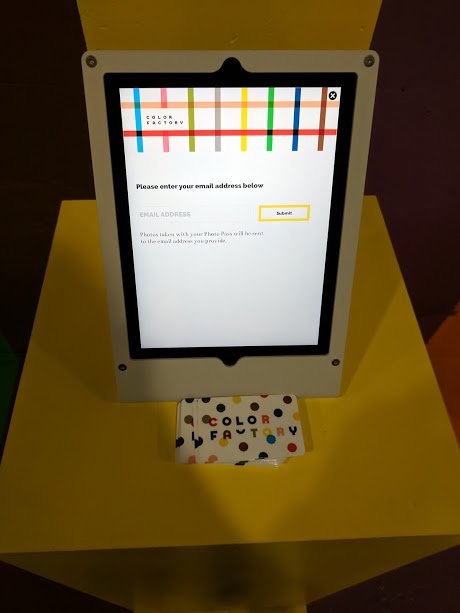 From here on out, scan the barcode on your card at any of the photography kiosks along your journey. The photos will be emailed directly to you! No need to bribe anyone into being the photographer or leaving anyone out of your shots.

Remember the smell of your grandmother’s perfume as she hugged you tightly? Or the distinctly heavy fragrance that descends just before a massive thunderstorm?

Smells can take you back to a certain place and time in an instant, and here they’re all associated with a colour. 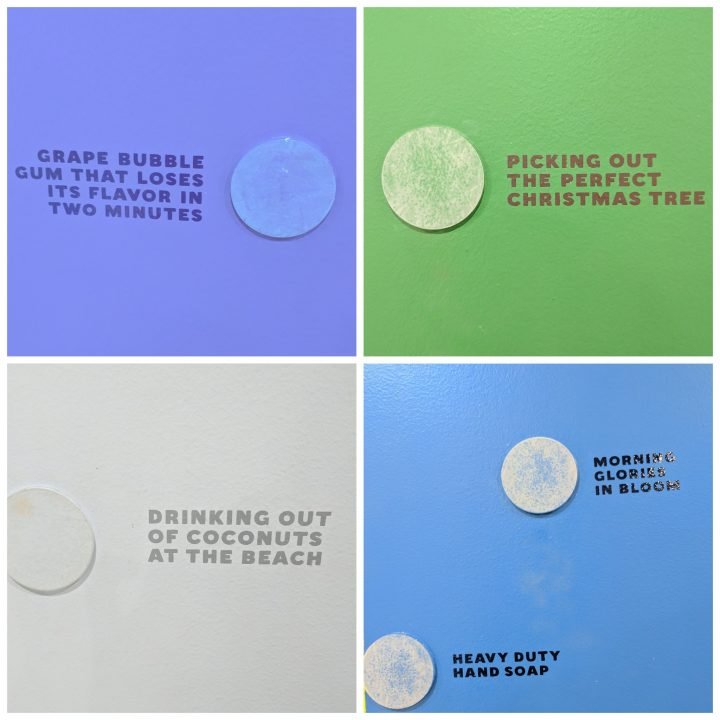 Forget the instant joy you feel when you found a chocolate at the bottom of your post (thanks past me!). What does it smell like?

It’s right there on the wall for you to sniff. And they’re surprisingly accurate. From Morning Glories in bloom to grape bubblegum that loses its flavor too soon – there’s a smell for every colour.

Some of them aren’t ones you’re necessarily going to want to permeate your nostrils. So finish it all off with the smell of drinking out of coconuts on the beach and you’ll be golden!

It’s time to turn to the delicious treats to your left!

Step on over to the Wheel of Fortune/Colour Wheel of Macarons and taste the rainbow. To borrow a phrase.

Generally, if you were presented with a glass of black liquid, your first reaction would be “where can I dump this?”.

Don’t even try to dispute it. Anything that shade should be returned to the scummy pond from which it was harvested, right? (These aren’t rhetorical questions people, I expect your answers in the comments)

Alright, now suspend your disbelief long enough to try the charcoal lemonade. I can’t give you a proper review, since Australian lemonade tastes so much different to the US kind already.

But I didn’t hate it at all. Which is much more than I can say about “regular” US lemonade.

Oakland artist Tosha Stimage put together the orange portion of proceedings. Her work, as described by KQED’s Sarah Burke, is about the limitations of language and this show examines the colour orange as an analogy for black identity. 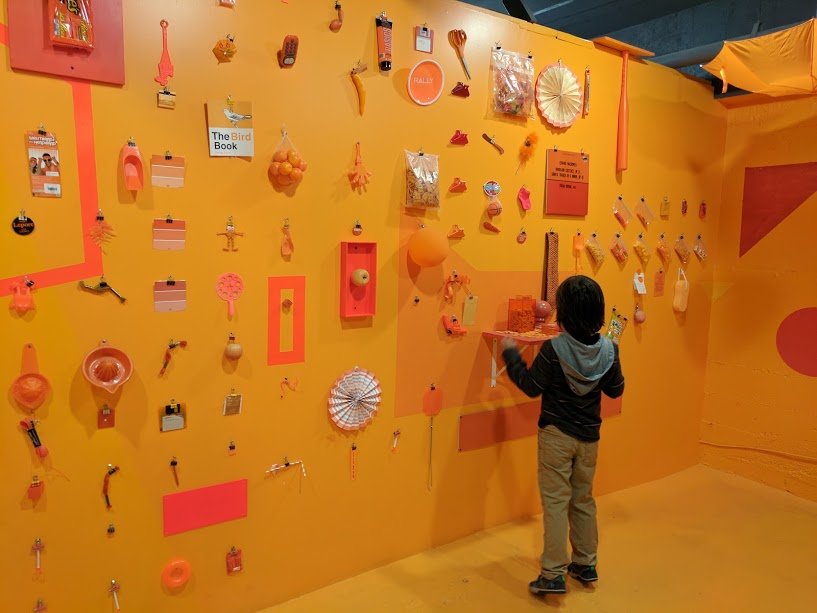 There’s every orange thing you can think of lining shelves, pinned to walls, hanging from the ceiling and even a beanbag on the floor.

I challenge you to walk into a room covered in balloons and keep the smile off your face. You can’t! It’s impossible. 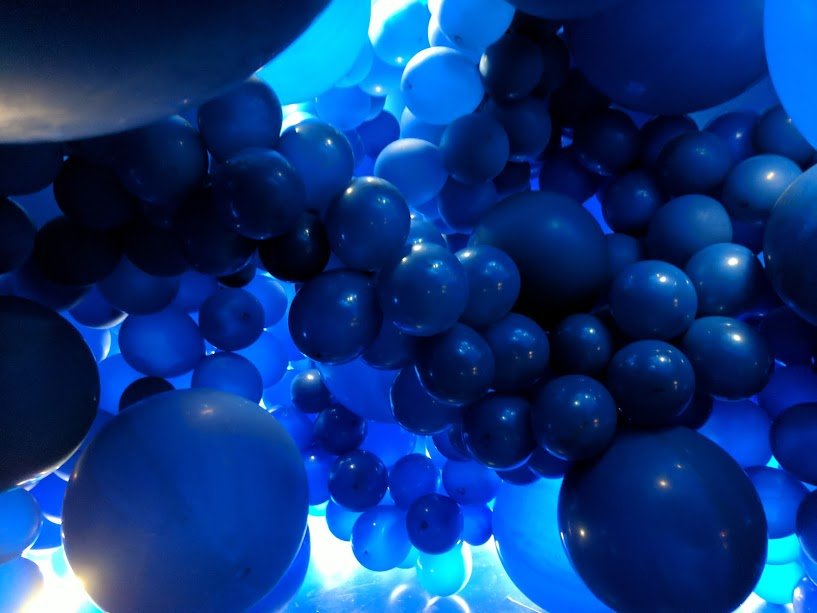 Balloons remind us of parties, celebrations, time spent as kids swatting them at each other or tightly gripping helium-filled balloons.

Remember the 70s? Me neither. But you can experience the era of disco-fever in the room full of disco balls and tunes. 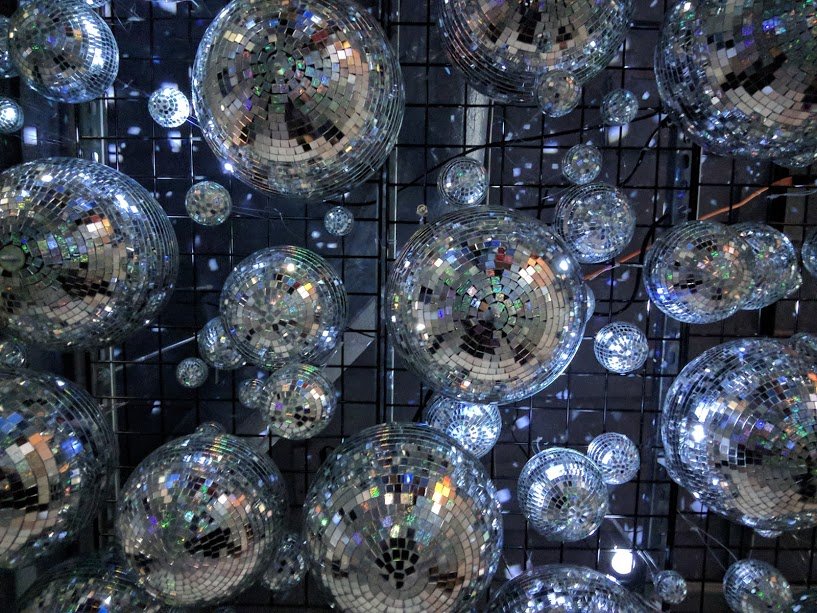 Choose your soundtrack from the buttons on the far wall, mine was Lucy in the Sky with Diamonds by The Beatles (how can you go past a girl with kaleidoscope eyes?), and watch the lights roll around the room.

LIGHTS AND COLOURING THE WALLS

I didn’t have a Light Bright when I was a kid, I actually didn’t know what they were until this part of the Color Factory. 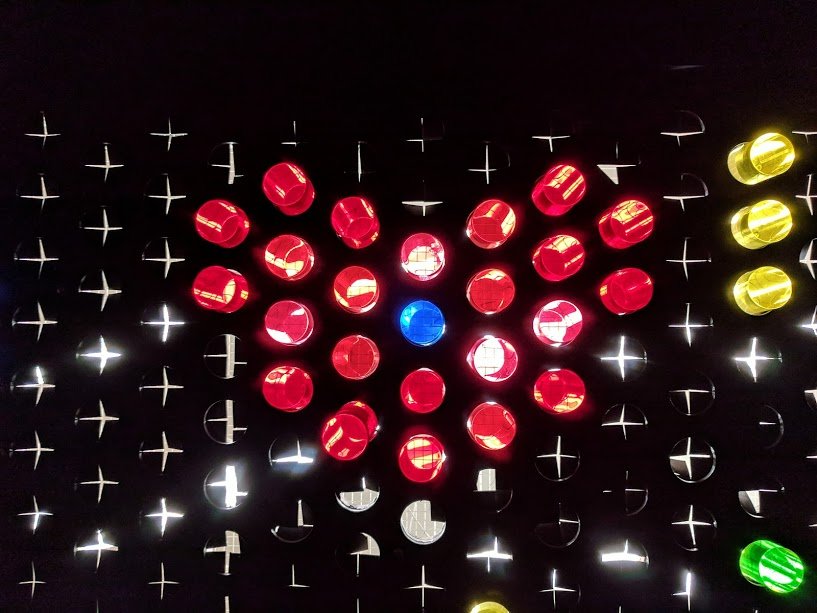 I would have felt like I’d missed out had I not been able to play with the giant Light Bright here. Of course, I made a heart and marveled at the other designs created by visitor’s past.

Onwards to do the one thing that was strictly banned in our household – drawing on the walls. Illustrators Andy J. Miller and Andrew Neyer covered the walls in murals ready for you to colour with the world’s largest texta’s. What are texta’s called in the US? Sharpies? Those things. 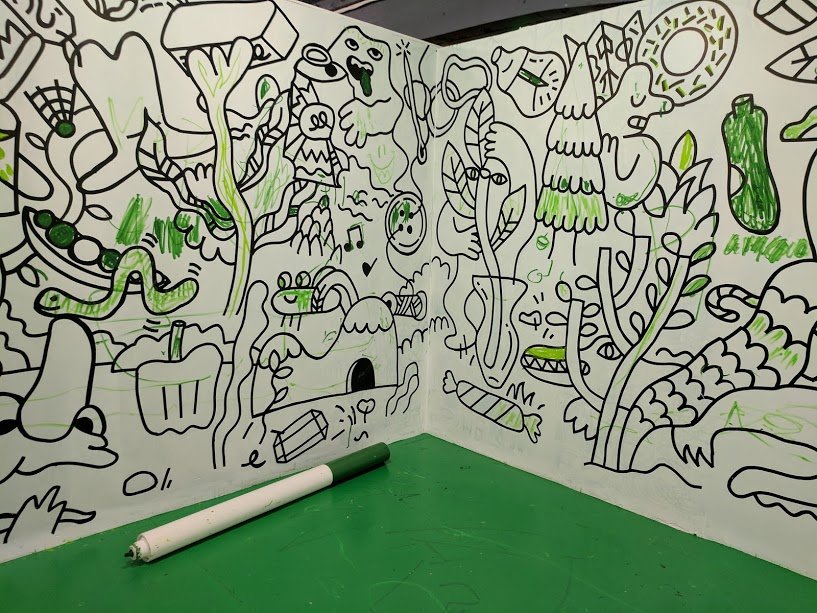 It took a while, but I finally got one leaf coloured. It was worth the work out.

RIBBON CUBE AND THE RAINBOW HALLWAY

Get lost in the cube of 10,000 ribbons hanging from the ceiling – but be careful – you never know who, or what, you’ll find in there. 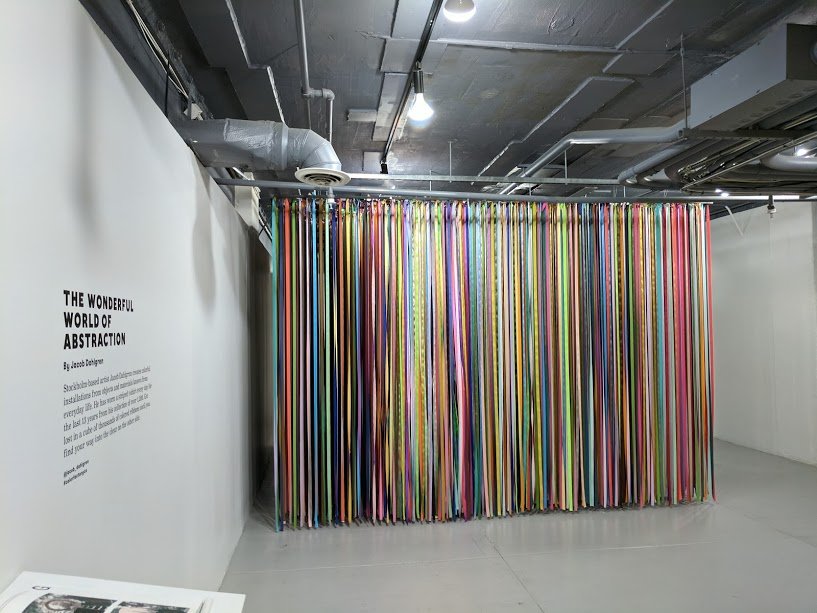 Although it does feel like you’re on your own in a world of coloured-ribbons. Artist and creator Jacob Dahlgren is such a colour-lover that he’s worn a striped shirt every day for the past 13 years.

See if you can make it to the other side of the cube without bumping into anyone or losing your sense of direction. 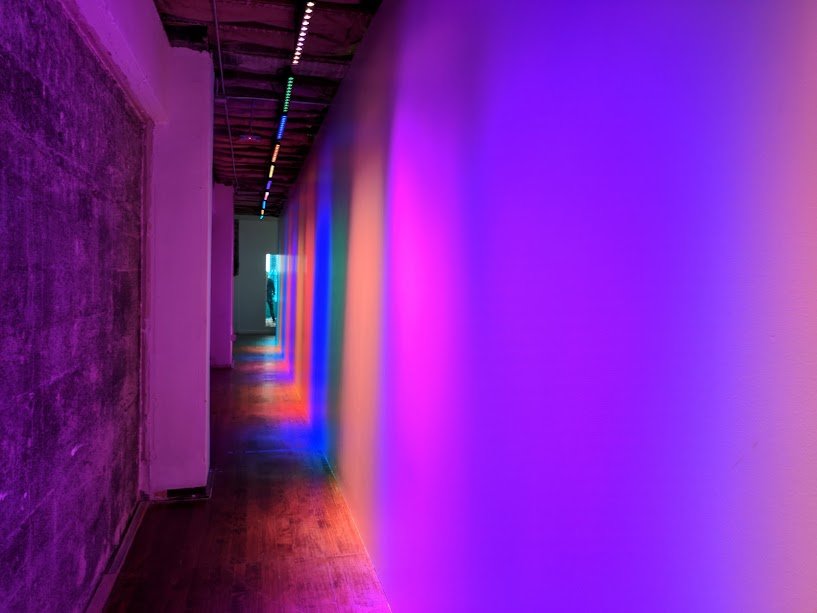 Stop for a few photos in the rainbow hallway before you get to the last few rooms of the Color Factory.

Playing in confetti is one of the most fun experiences in the factory, bar just one more that’s on its way.

The confetti room was filled with adults and kids alike, throwing handfuls up in the air, fistfuls at each other and standing under the confetti rain. 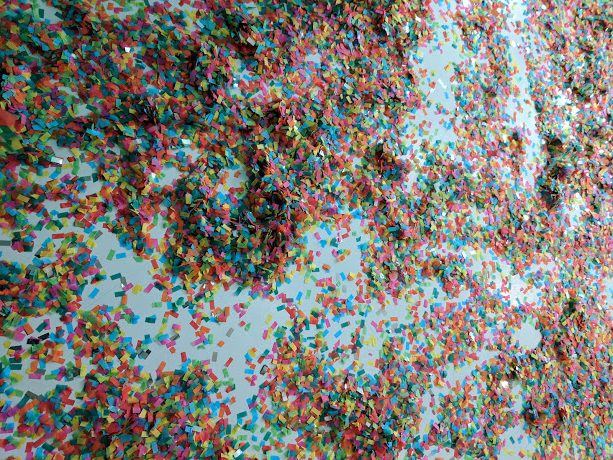 Goodluck getting it all out of your clothes and hair though. My hoodie collected a fair amount of coloured paper. If anyone from the Color Factory’s reading this, just let me know if you want it all back.

The “Selfie” room is a monument to voyeurism and narcissism rolled into one, although I’m not quite sure that’s what the artist was getting at.

Tom Stayte coded and put together a machine that prints out Instagram photos that are labelled #selfie. 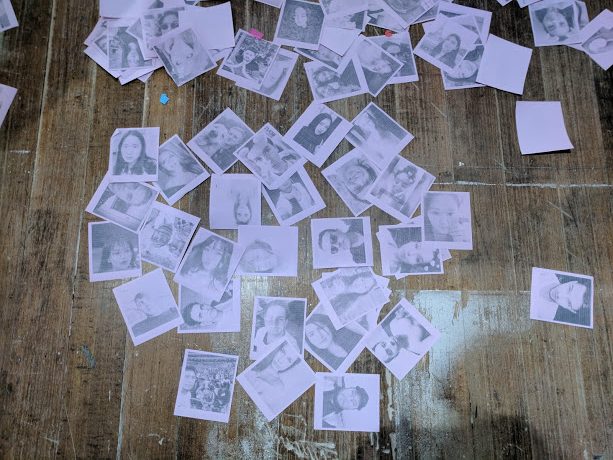 A new image hits the floor every 12 seconds (that’s where the narcissism comes in). The voyeuristic part is all of us peering down at the pictures, wondering who the person behind the photo is and considering sending our own #selfie.

The moment I’d been waiting for from the very beginning – the sunny yellow ball pit. This thing is serious, spanning an entire room, shaped like a pool complete with stairs and railings to lower yourself in. 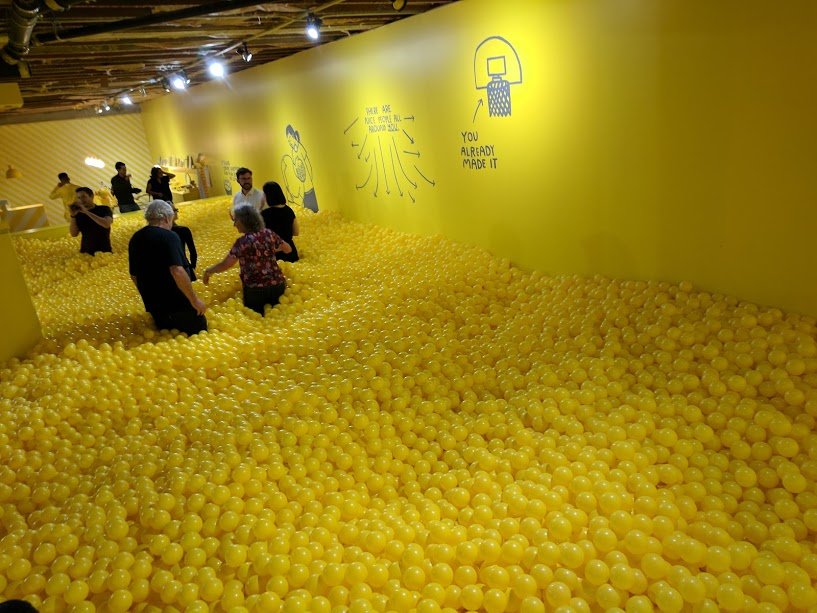 The ballroom was filled with people of all ages – from seniors to little kids – recapturing their youth or living it with giant smiles on their faces.

Fall into the pit, wade your way through the sea of yellow, take a million photos and help your fellow pool-ers through.

Tickets went as quickly as they were released for the San Francisco Color Factory. A second release of tickets for September just sold out.

But keep your eyes on the Factory’s mailing list for another release of San Francisco tickets and news of other locations!