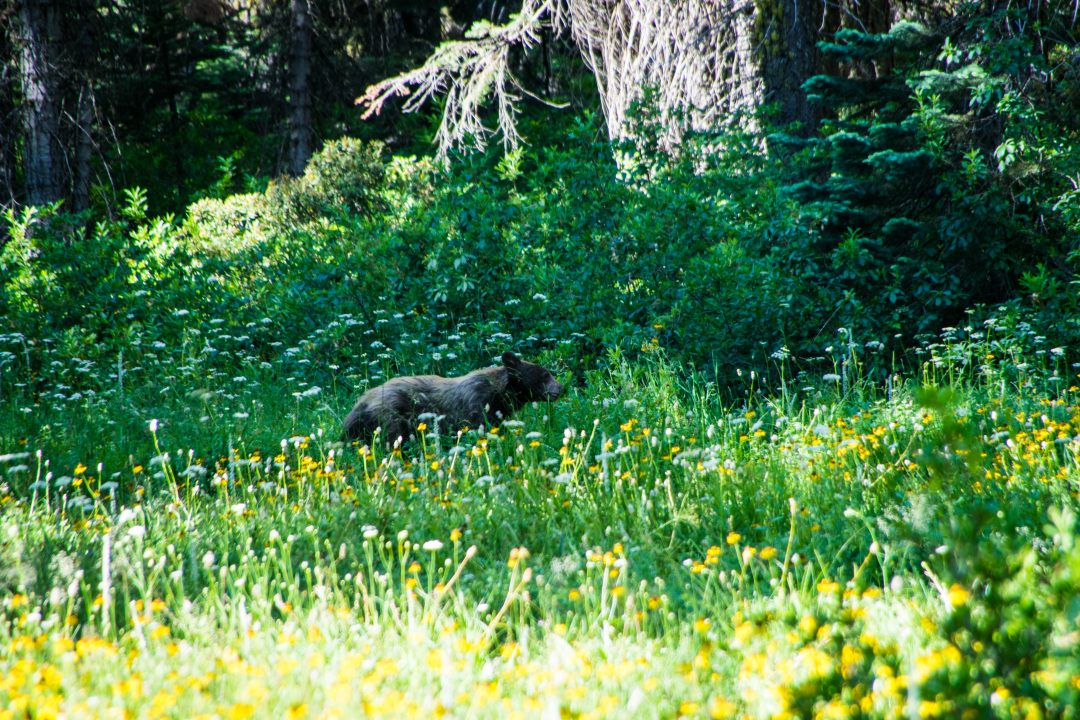 If you want to get some cute critter sightings out of a camping trip, spending at least two days in Yosemite National Park is a great way to start. I’ve been twice and have so far seen various types of squirrels, chipmunks, deer, and the holy grail of forest creatures – a bear.

That’s right, I’ve been rabbiting on (pun intended) about wanting to spot a bear since we camped at Malakoff Diggins, but until last month they were laying low. Apart from the odd berry-laced scat we stumbled upon.

Finally we landed the jackpot – a bear right behind out campsites. Mr M got some fantastic shots without disturbing Smokey, you can find more of them here. But more about Mr Bear a bit later.

The first step is to book your campsite or stay in one of the many lodges. We put together a great guide to picking a place to stay and planning a trip. But once the planning’s over, how do you decide what to do in the 3,100 square kilometre park?

Here’s how we whiled away our days at Yosemite!

We wanted to make the most of our two days in Yosemite, so we decided to get the car packed and head over on Friday night after work.

Yes, it meant battling through traffic. Some of it not altogether pleasant. But luckily Mr M’s parents had been there for a few days before and had set up our tent for us. All we had to do when we arrived at 10pm, was unfurl our sleeping bags and snuggle in for the night. 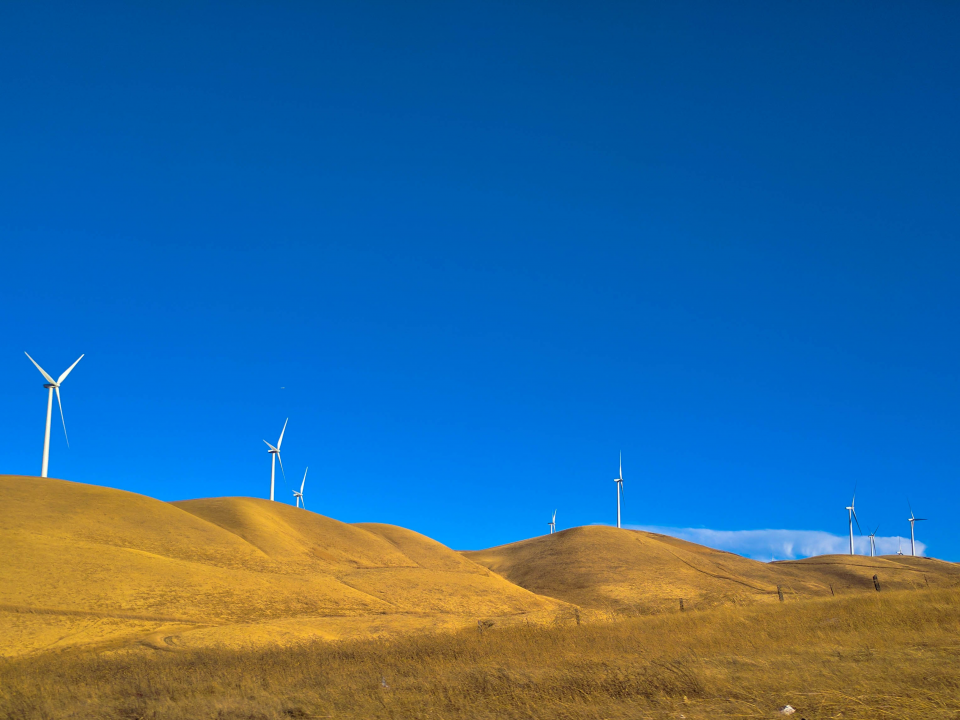 How could you pass up the chance to drive through beautiful country during Golden Hour?

What’s the best news to hear in the dark before getting into a little tent on the outskirts of the forest? That a bear had been spotted in the meadow behind your site a few days before. And that bear had not been chipped so it couldn’t be tracked by GPS.

I may have spent half the night jumping at every sound (including crows squawking), and whispering loudly “IT’S A BEAR!” in Mr M’s ear. I’m not sorry about it. It could have saved our lives somehow.

Breakfast was spent craning our necks to get a view of the meadow in the hopes that Smokey the Bear would show up. We even wafted the delicious smells of pancakes and sausage (you always eat delicious food when Mr M’s mum is planning and prepping meals and his dad is cooking them).

All to no avail. That bear was not coming out.

Our aim was to do a little hike at Tuolumne Meadows, but first we had to get there. It was an hour’s drive from our campsite in Crane Flat though so we broke up the drive with little photo stops along the way. 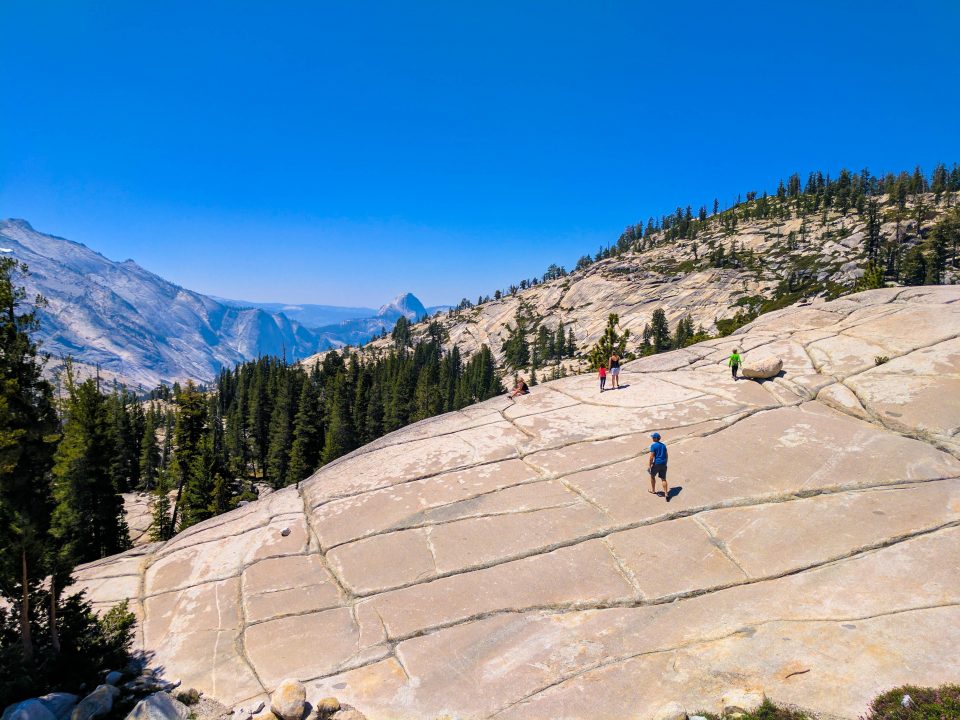 Olmstead Point is a popular rocky outcrop set in the alpine landscape. It’s popularity stems from the sweeping views it offers. You’ll see the northern side of Half Dome as well as the Tenaya Canyon and Lake.

It features a scattering of giant boulders along its granite slopes and is a must-see if you’re travelling along Tioga Road. 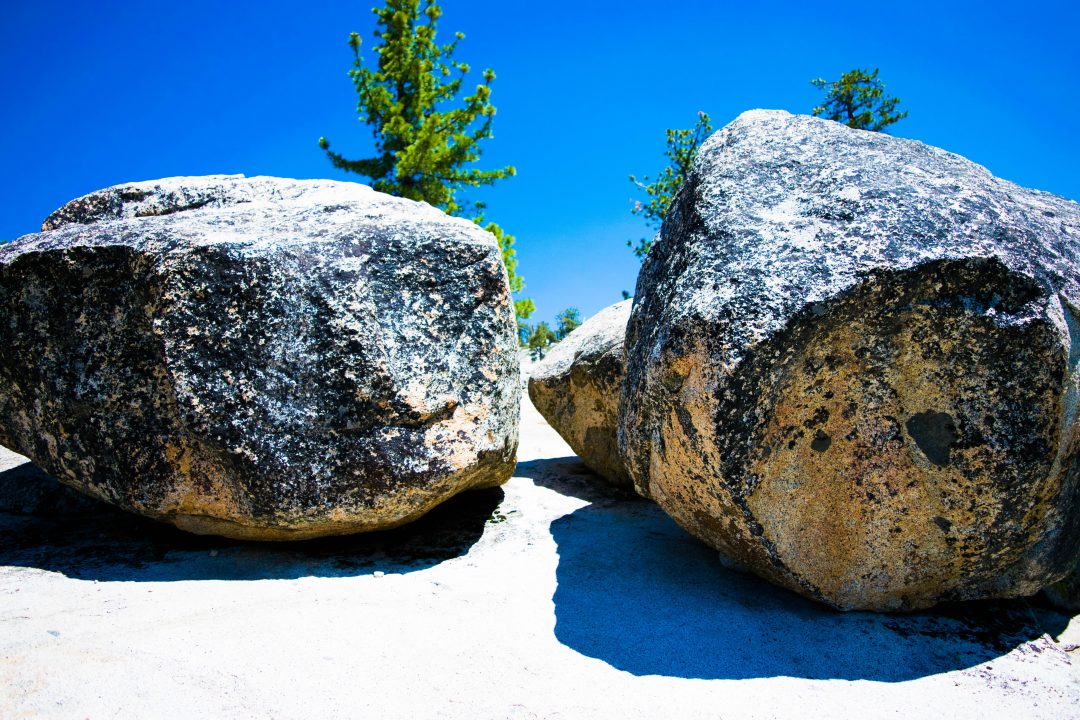 Bring your binoculars as well, because on a clear day you’re supposed to be able to see climbers scaling Half Dome. I have terrible eyes, or maybe the climbers were taking a break, because we didn’t see any.

There is also a great short hike that begins at the lookout point and is about a 30 minute round trip offering more great views.

You can also stop a little further down the road at Tenaya Lake.

It’s a good idea to stop by the Visitor’s Center on your way into the area to get a feel for the place and find out what’s open and shut on the day.

If you’re not quite sure which hike would suit your group best, have a chat to the rangers in the centre, they’ll be able to tell you how difficult or easy each trail is. Sometimes guidebooks can be a little vague. 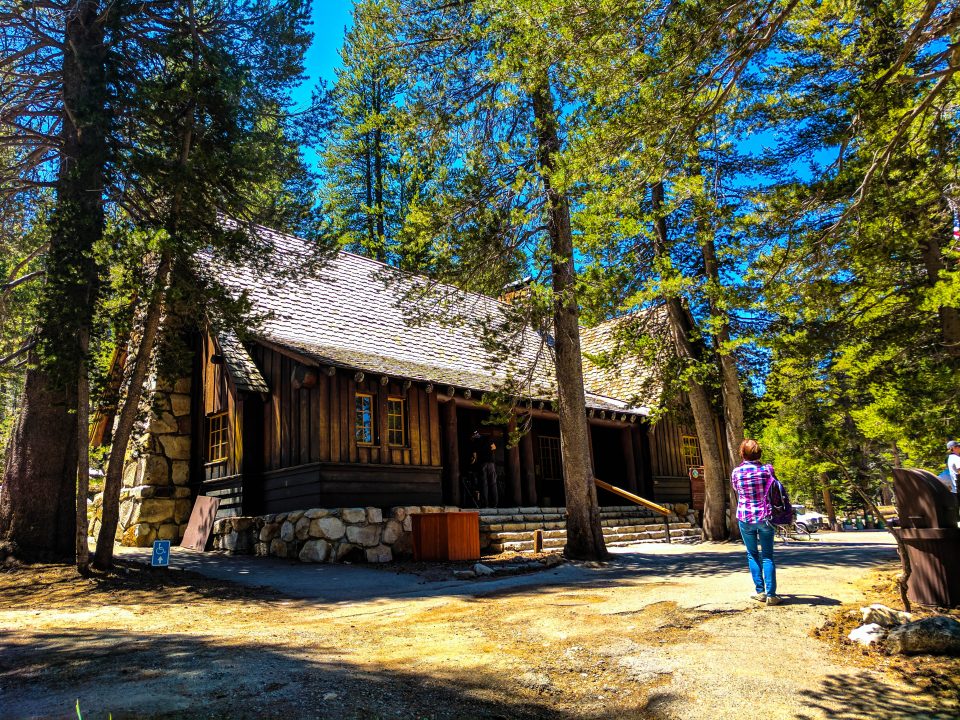 There are also flushable toilets there and you can get your hands on some maps and guide books. If you have kids, there are a few displays of butterflies, a collection of granite from different peaks in the park, pressed flowers and animal paw molds.

There are lots of hikes that you can do from the meadows, some more strenuous than others.

We stuck with the Soda Springs and Parson’s Lodge short walk, because of various injuries and the like. It’s billed as an hour’s round trip but you could definitely take longer if you’re capturing photos of the scenery, wildlife and wildflowers like we were.

Other hikes will take you to places such as Lyell Canyon, Elizabeth Lake, Gaylor Lakes, Cathedral Lakes, Mono Pass, Dog Lake and Lembert Dome. You’re not going to be bored at Tuolumne Meadows, that’s for sure.

The Soda Springs hike meanders through the meadow before taking you past some small, carbonated mineral springs. A hut was built around a few of these springs by Jean Baptiste Lembert as a way of protecting them from animals. 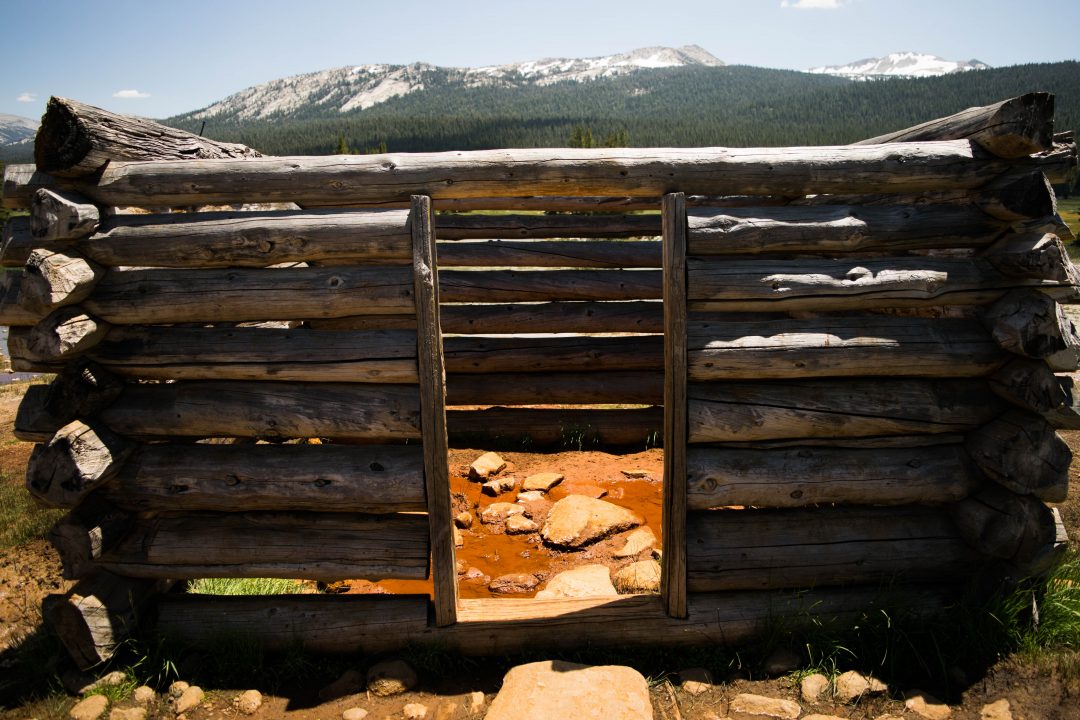 Both animals and people have used the springs as a source of cool water over thousands of years, though their beginnings remain a mystery. Geologists don’t know how they got there, but they do draw inquisitive hikers.

Further up the path and in sight of the Soda Springs is Parsons Memorial Lodge. Built in the summer of 1915, using mules and trucks to bring in building materials, Parsons Lodge was a memorial to a well respected member of the Sierra Club. 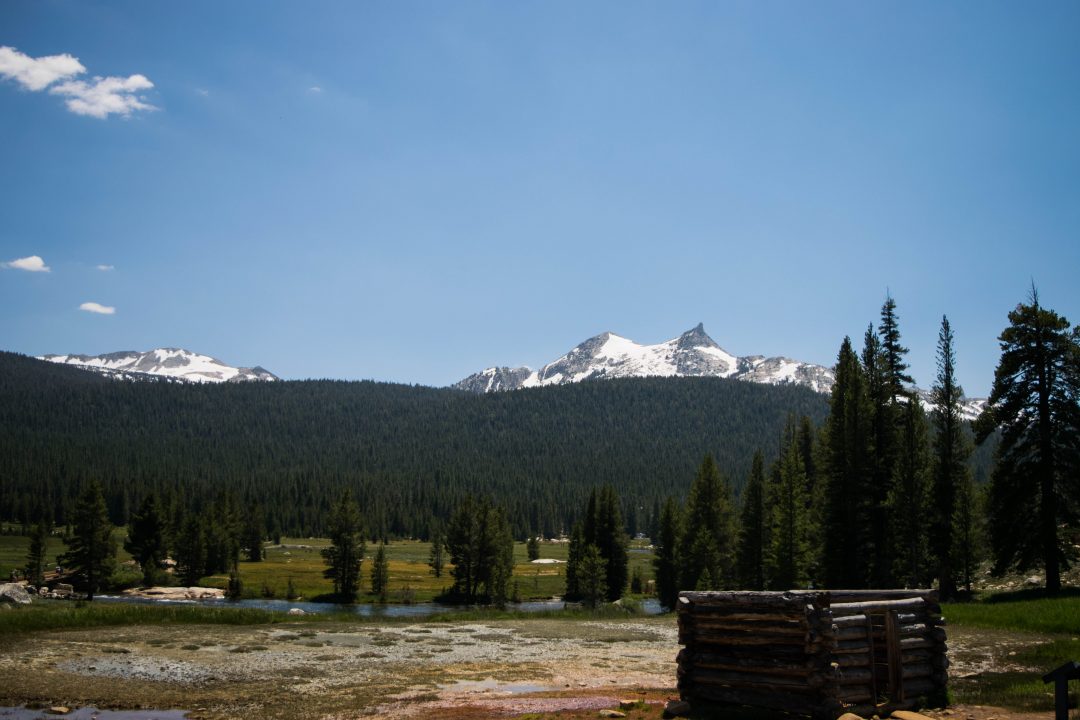 New Yorker Edward Taylor Parsons served as the Sierra Club’s director between 1905 and 1914 and was instrumental in fighting against a plan to flood the Hetch Hetchy Valley to provide water to San Francisco. San Francisco still gets its water from Hetch Hetchy today. 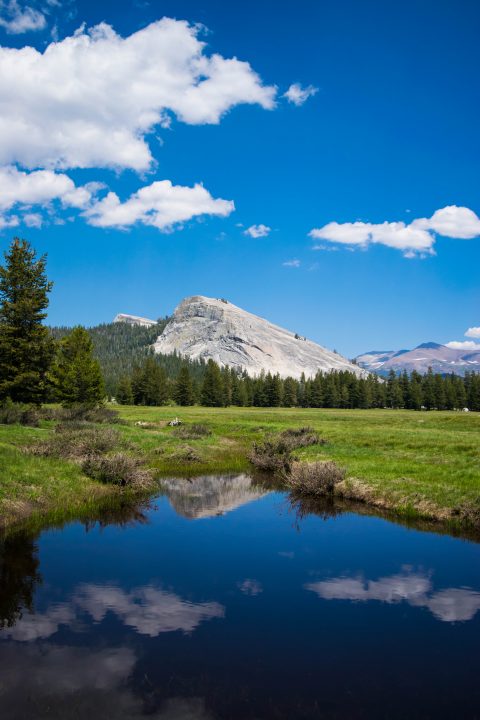 After Parsons died in 1914, and a year later the memorial lodge was funded and built. It is now used for exhibitions called the Summer Series.  It features everything from yoga to book signings to environmental discussions. See Yosemite National Park’s Special Programs for more details.

Tuolumne Meadows is a great place for lunch as well – there are bear boxes to store your food so your car isn’t flattened by a bear – and picnic benches in the shade.

Road Trip Back to Camp

Put me in a car for even a moderate drive and I’m out like a light. Honestly, I would be the perfect baby to get to sleep. In any case, I don’t remember much of the trip back to camp except that we stopped at the Crane Flat Gas (petrol) Station for ice cream.

Fun fact about this petrol station. It has a resident bear. This one is GPS tracked though, that’s how we know it visits the station every single day. The petrol station is surrounded by trees and woods, so he’s easily camouflaged and most visitors don’t even notice him.

But he makes a daily trek to say hello anyway.

After a long day of driving, hiking and picture taking it’s time for a nap! Or if you’re me and slept like a log in the car you get to explore the camp ground. 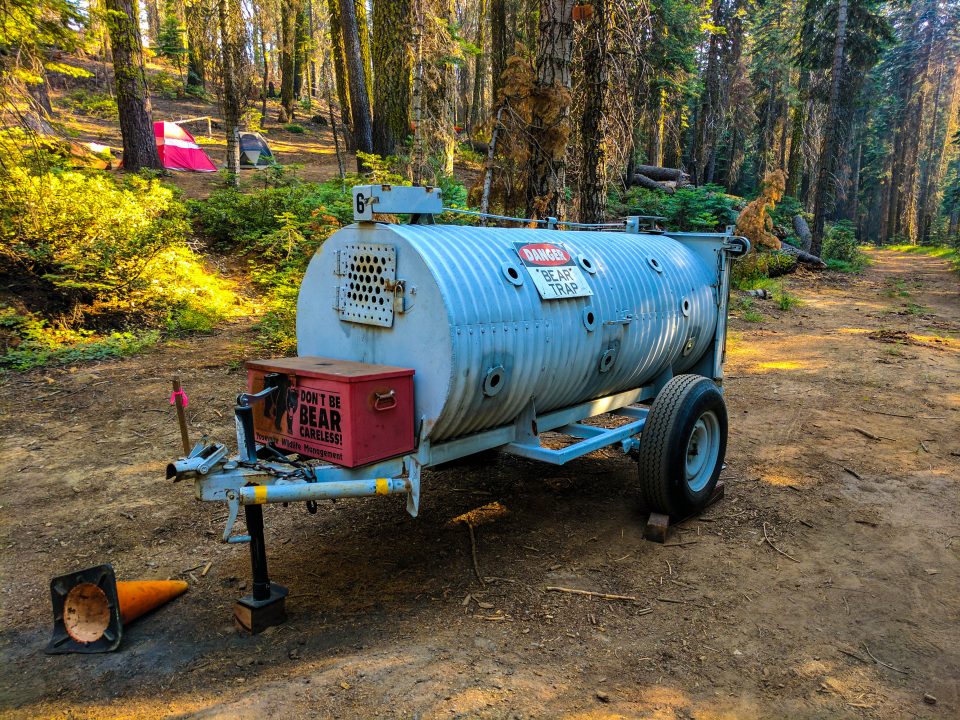 This is how you get to find cool and somewhat scary things. Like that bear trap a few sites down from your tent, but isn’t actually baited or set.

Which means it’s totally safe to wader down that path it’s on, right? Well I did anyway and stumbled across some interesting bits and pieces like a cairn made of bark and moss and a lot of trees being cleared.

There are two options to consider here. If you’ve got a master fire builder amongst you, get them to work. In the meantime play cards or a board game, continue looking for the elusive bear or listen to some music. You brought portable speakers right? Good.

You can spend the whole evening talking, laughing, telling stories, playing games and eating ‘smores. In fact, I highly recommend this option if you’re only spending two days in Yosemite. Especially when a certain someone looks up recipes for gourmet ‘smores and you end up eating lemon meringue and mint chocolate ones. Delicious! 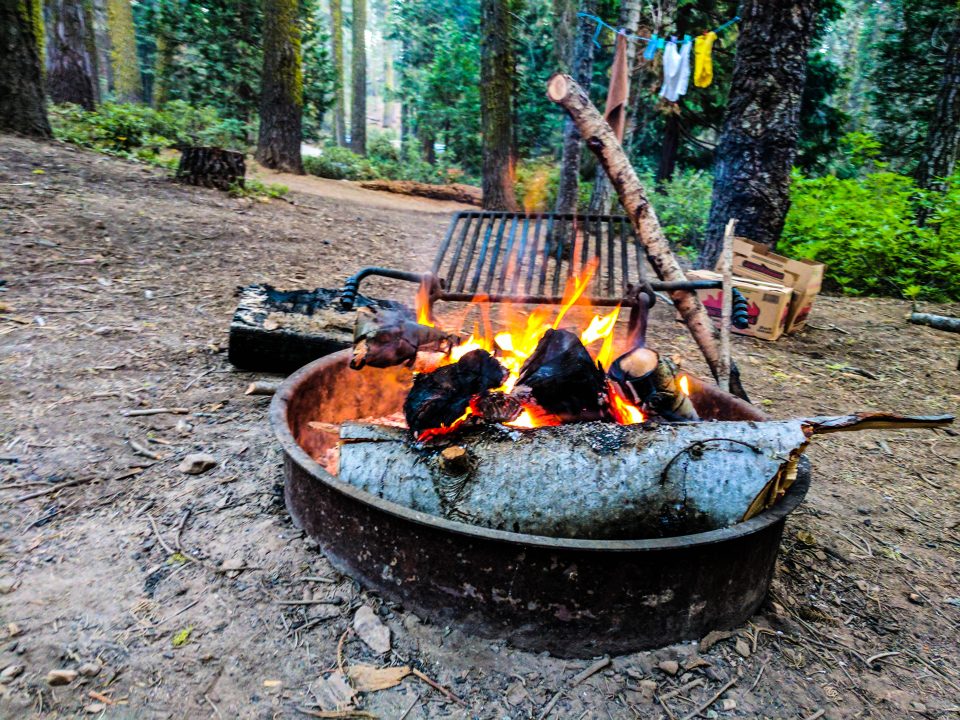 The second option is to do some of the above in the camp’s ampitheatre. Rangers build a fire and tell stories to anyone who wants to come along to listen. Sometimes they’re funny, other times they’re educational, but they’re always interesting.

And you get to meet fellow campers and make new friends. What’s not to like?

Despite a healthy serving of bacon and eggs, Smokey the Bear is nowhere to be seen. Instead Bambi makes a break for it through our site, just metres from where we were trying to wake ourselves up with vats of coffee.

So we break up the tent and start packing the car. Of course I’m never happy with the million photos I’ve already snapped, so I mention to Mr M that I’m going to visit the meadow behind us after I brush my teeth. 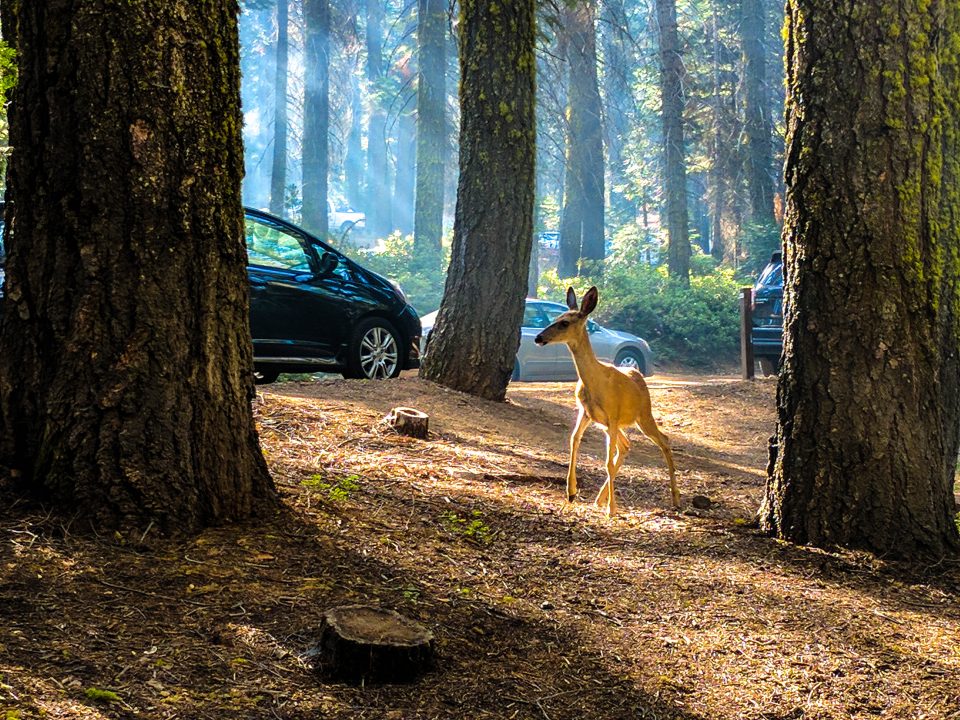 I return to find him running from the meadow for a different camera lens, whispering loudly “There’s a bear!”. And that’s how we finally saw Smokey behind our campsite. He was happily searching for food, pawing in the grass and having a great old time in that wildflower meadow. 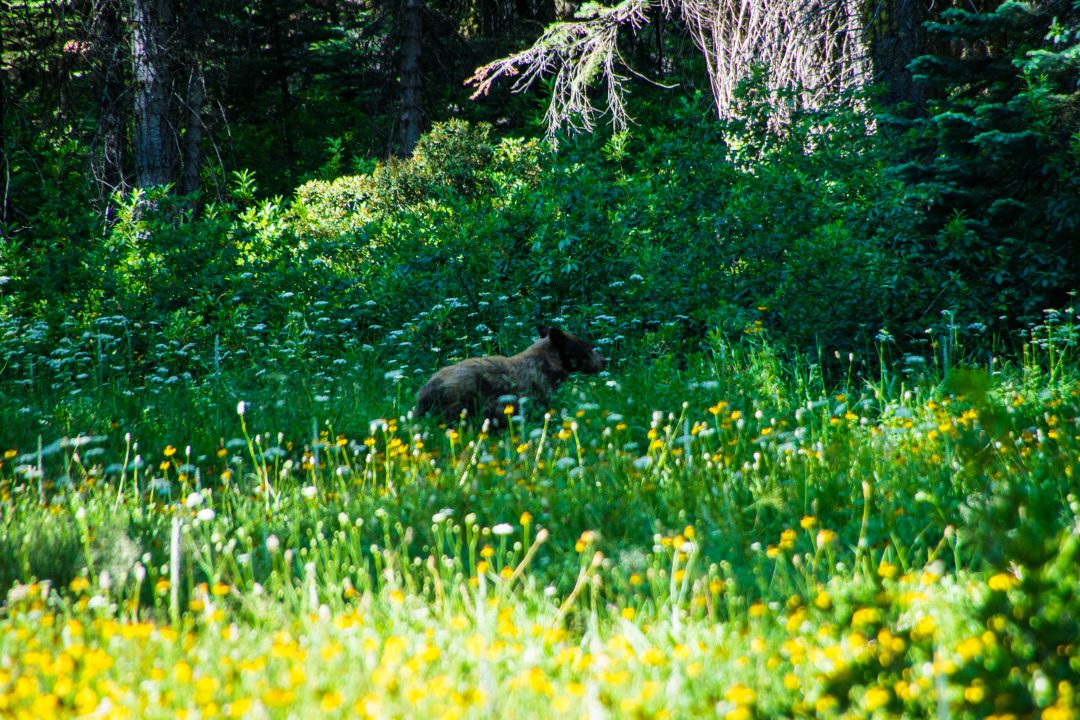 He was a happy camper and so was I, having finally seen and not been mauled by a bear. Take that Bill Bryson! Even after reading all the horror stories in A Walk in the Woods, I still wanted to see a bear and made it through unscathed.

Even though we were all packed up and ready for our 12:00 PM camp checkout, this is a two days in Yosemite trip and we were going to cram in as much adventure as possible.

So off we went on another hour’s trip to Glacier Point – one of the most spectacular views in all of Yosemite. But there are also some great views on the way up that are worth stopping for as well.

The first is Tunnel View, which will give you some breathtaking views into Yosemite Valley, El Capitan on the left and Half Dome on the right. You’ll also catch Bridalveil Fall if you look closely on the right. 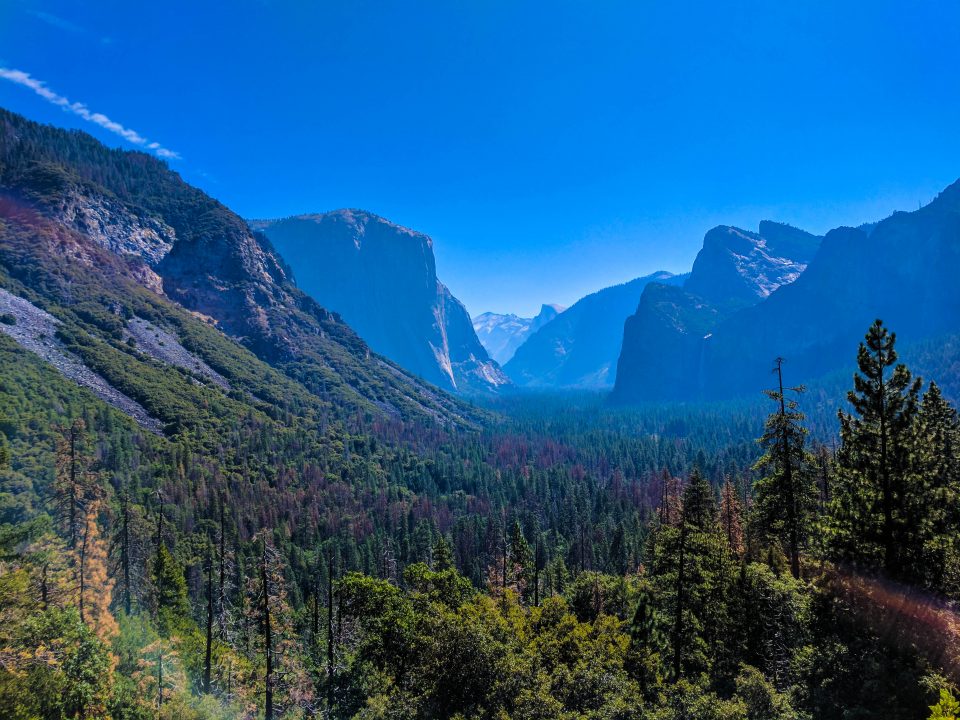 You’ll want to stop again at Washburn Point, even though you’re so close to Glacier Point. Washburn lets you see and hear Vernal and Nevada Falls better than you will further up the road. 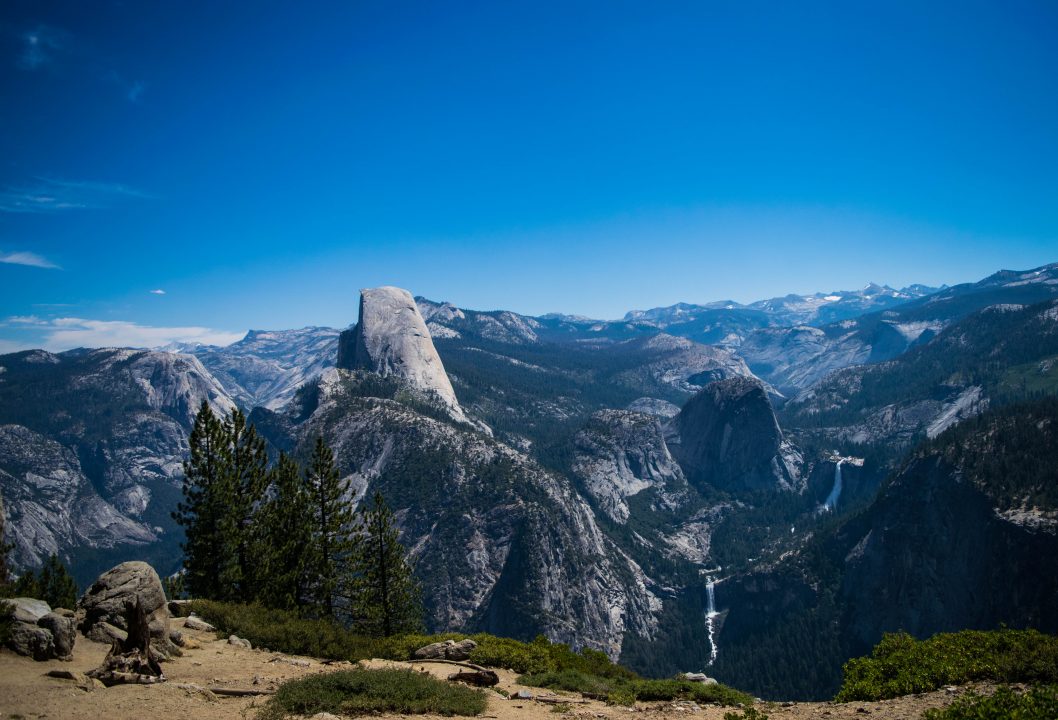 Then you hit Glacier Point – the jewel of Yosemite. It’s the place to gaze down into Yosemite Valley and marvel at the beauty of the mountains, the trees and waterfalls all at once.

Nothing else I could say would do the views justice, so instead, I’ve got some more pictures for you. 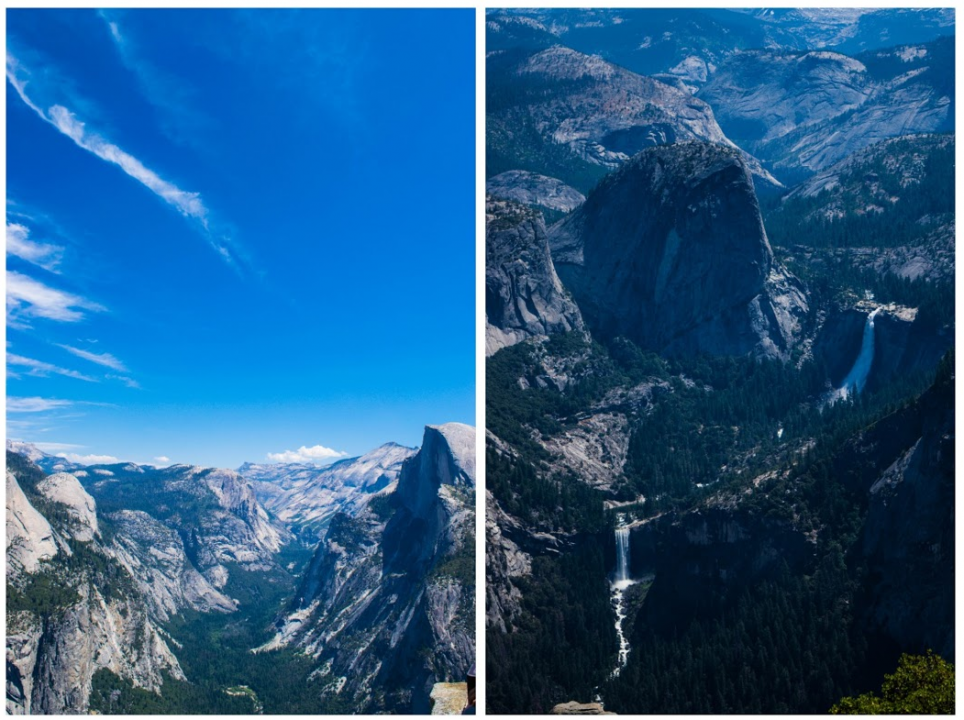 And that was our two days in Yosemite. It might not seem like a lot packed in but you want to be able to enjoy what you’re seeing and not be rushing non-stop. The whole point of Yosemite is to relax and enjoy nature, which we did.

Have you been to Yosemite before? What did you think? And, more importantly, what did you do? 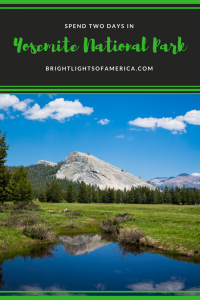 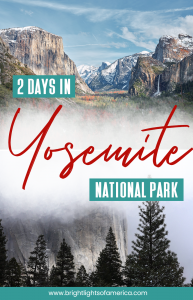