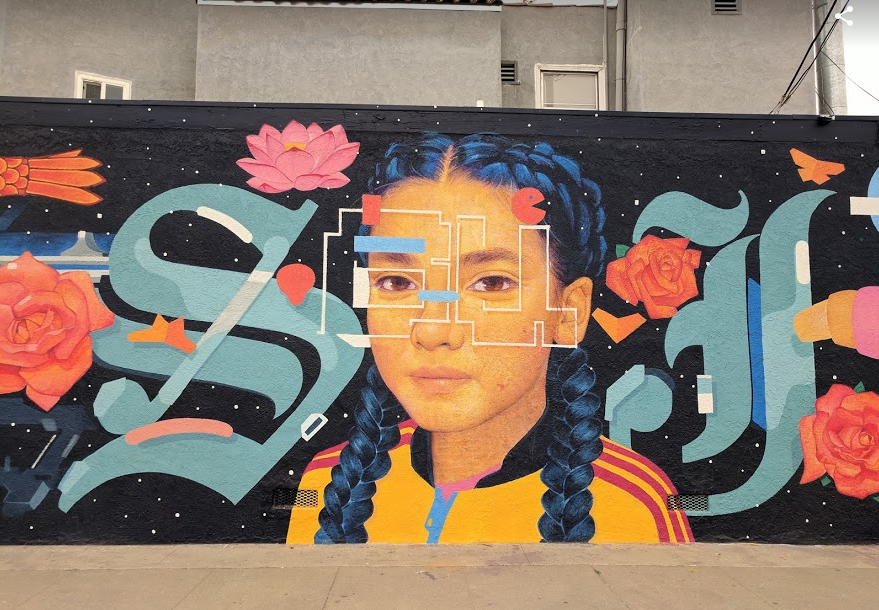 Japantown San Jose is one of just three such towns in the entirety of the US. We’ve all been to a Chinatown at least once, but when was the last time you went to, or even heard of, a Japantown? All three official Japantowns are nestled in California. Japanese migrants flocked to Los Angeles, San Francisco and San Jose after Japan was returned to imperial rule, in 1868 following a coup and a brief civil war.

The instability meant Japanese people fled, first to Hawaii, and then to the mainland US, mostly to California because it was the most easily-accessible coast. Many joined the agricultural industry, bringing their own culture and tradition to a new country. 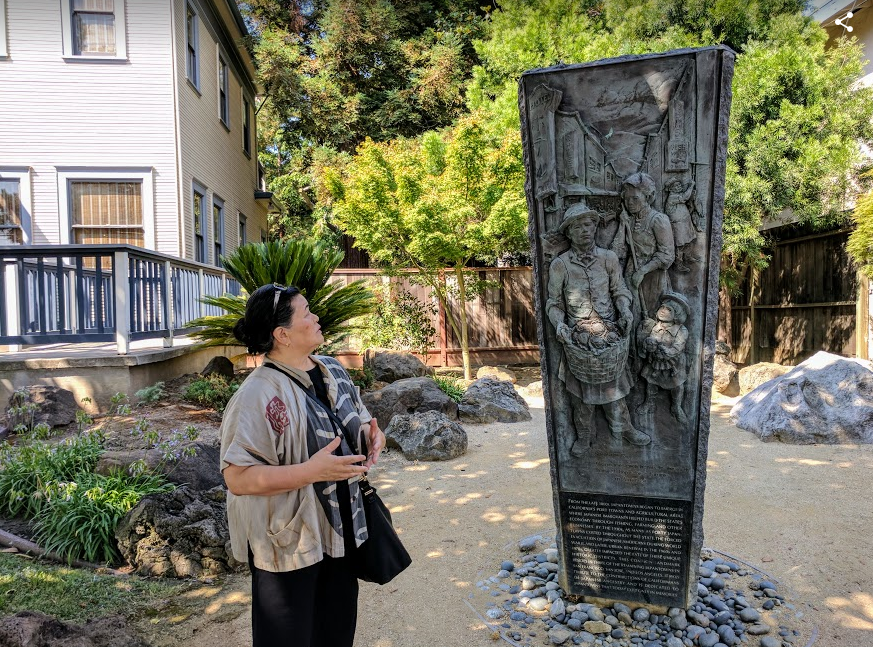 A monument to the migrants who lived and struggled through the early days in Japantown San Jose.

Japantown San Jose is a meshing of the old and the new. You might think that a Japanese American Museum recounting the history of Japanese immigration and internment in the US and Buddhist temple would sit incongruously with street art and café culture.

You’d be so wrong. Here are some of the best things that Japantown San Jose has to offer. We’re only scratching the surface here, the community is ever-evolving and there always seems to be a new event or project on the calendar.

You’ll find street art all over the Japantown streetscape: on shopfronts, the sides of bars, outside laundries and eateries. They are all Japanese-inspired and have elements of Japanese culture, such as koi fish and dragons. What I loved most about street art in Japantown is that it’s so colourful and vibrant. It has depth and a presence that you won’t soon forget. 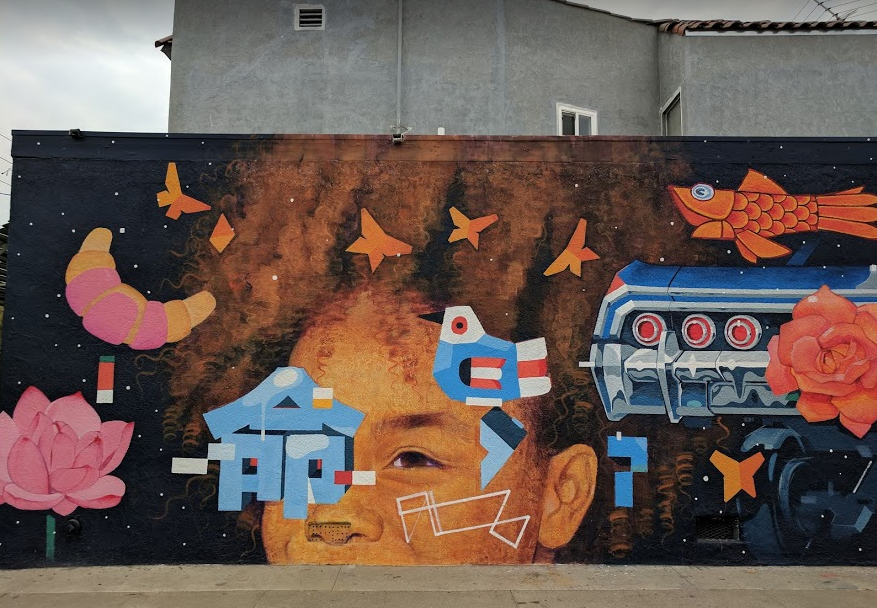 The art in Japantown San Jose tends to look towards the younger generation.

But you won’t only find it adorning walls in the town. The Art Box Project SJ has been beautifying the city’s utility boxes since 2011 when traveler Gary Singh mentioned the idea to friend Tina Morrill, saying that it couldn’t be done. 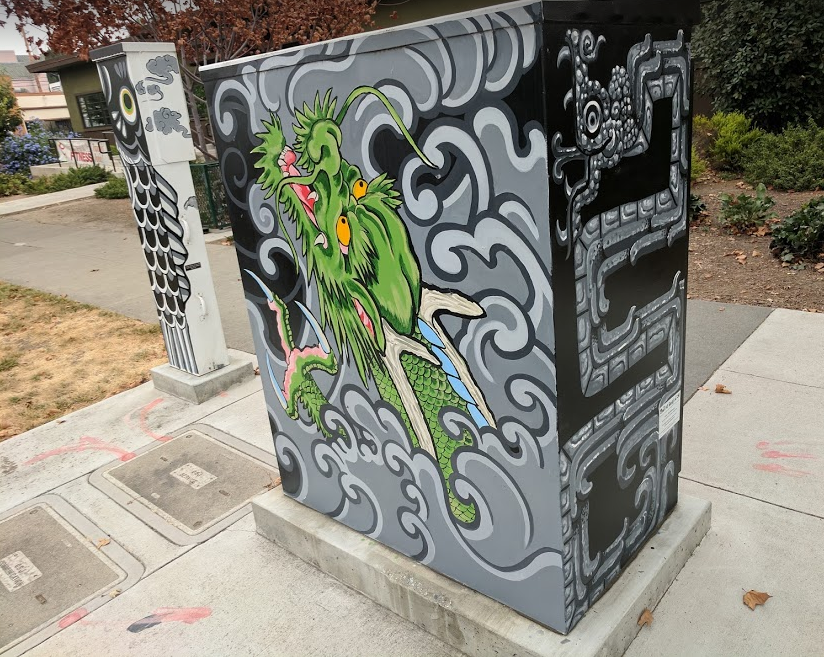 A utility box with style, is always going to be an eye-catching utility box.

So Tina went ahead and began the project, because if it’s one thing us humnans love doing, its proving our friends wrong when they tell us something is impossible. Tina is described on the Art Box facebook page as “an idealist who wants to believe anything is possible”. I think she accomplished this mission with aplomb. In Japantown you’ll find dragon, fish and kimono-clad women adorning utility boxes all over the town.

The goal of the project is to “capture the unique voices of our communities. Surprise the passer-by with a spot of whimsy where they least expect it.” 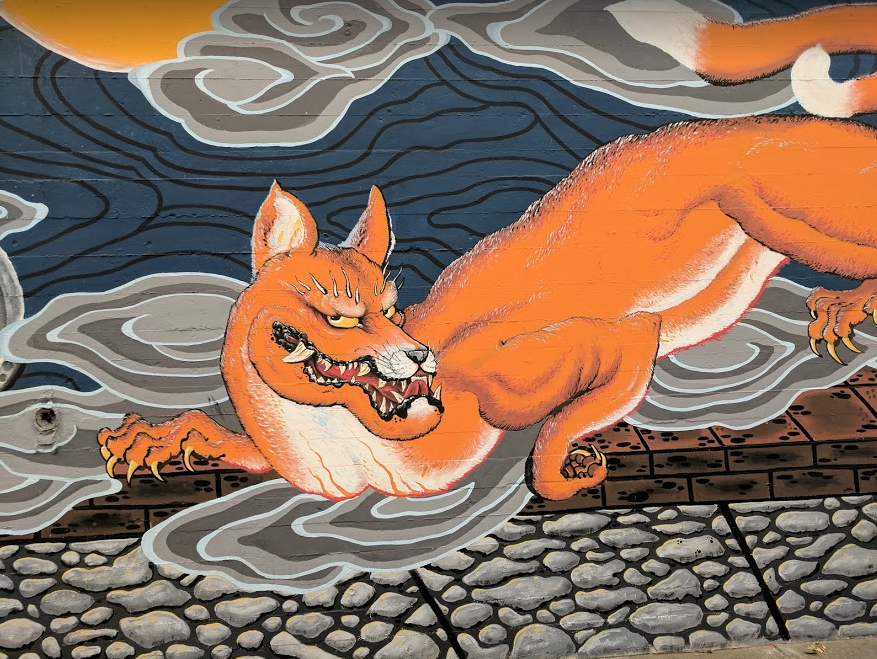 Then there are the murals – walls full of colour that pop up in residential areas, on main streets, and next to the railway line.

Get a glimps of Japanese Migrant history in America

Nestled between suburban homes sits a traditional Japanese building, which houses the Japanese American Museum. The story, as you can imagine, isn’t always a rosy one. Many migrants lead hard lives after arriving in the US, but they were also cushioned by their own community. 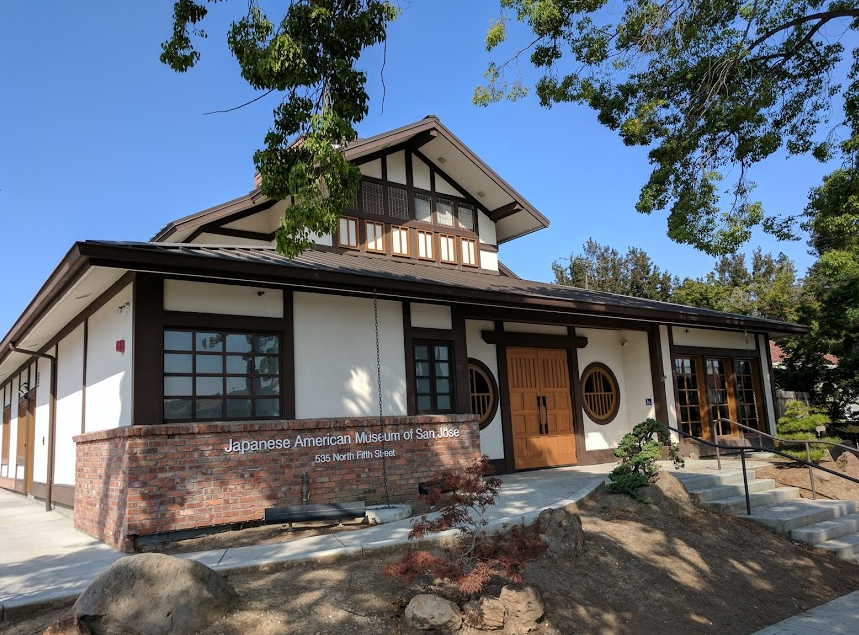 The museum is actually the former home of Dr Tokio Ishikawa, that was purchased and donated to the museum.

Spanning the Japanese immigrant experience through history, the museum begins with the first migrant workers being screened at Angel Island. Farming machinery, tractors and cars sit in rows outside of a mock Japanese-American home, complete with furniture and utensils to get a feel of what living in California was like for them. 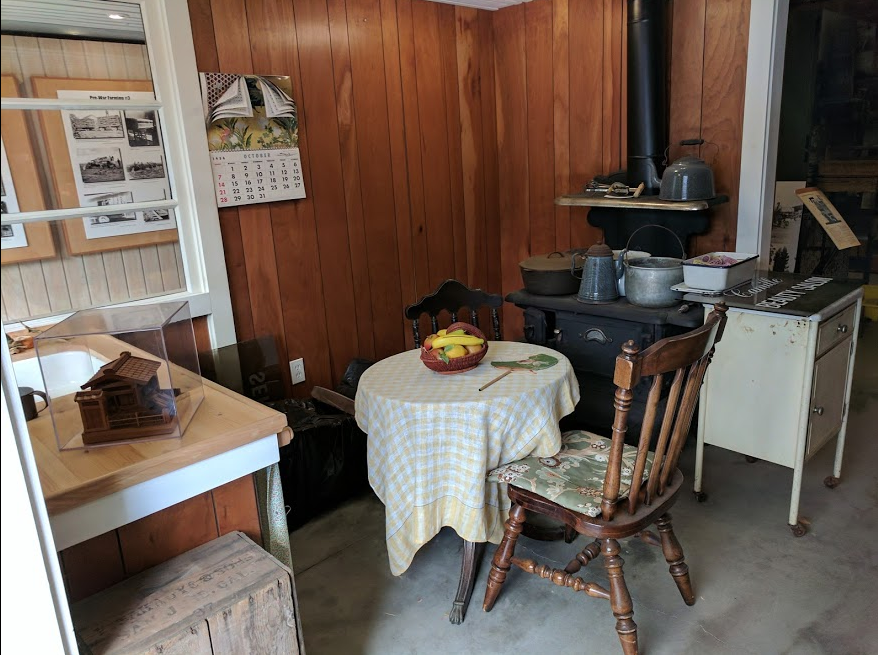 An example of the living quarters of Japanese-American migrants.

The attack of the Pearl Harbor by the Japanese military would change things dramatically for Japanese-Americans. In February 1942, President Franklin D Roosevelt allowed for Japanese Americans to be interned.

San Jose’s Japanese were forced to abandon or sell their property for a pittance. But in some cases, Americans took the deeds to the Japanese-American owned properties and returned them after the war. Families were issued papers with numbers assigned to each group, instructing them to “report ready to travel on” a certain day and time. Bringing with them only what they could carry, the Japanese-Americans were forced to leave their homes, businesses and properties behind.

According to the Japanese American Museum, the families were first sent to Assembly Centers. “Most were transported by bus or train under the watchful eyes of soldiers. These 16 temporary camps, generally close to where the internees lived, were usually former fairgrounds or race tracks. Here they stayed approximately 100 days until more permanent War Relocation Authority Relocation Centers were built in desolate sites in the inerior of the country.”

More than 112,000 people were interred at camps in deserts and swamplands until 1946, when the last resident left the Tule Lake center in California. The museum has recreated the living quarters of these internment centers, based on the memories of those who returned. 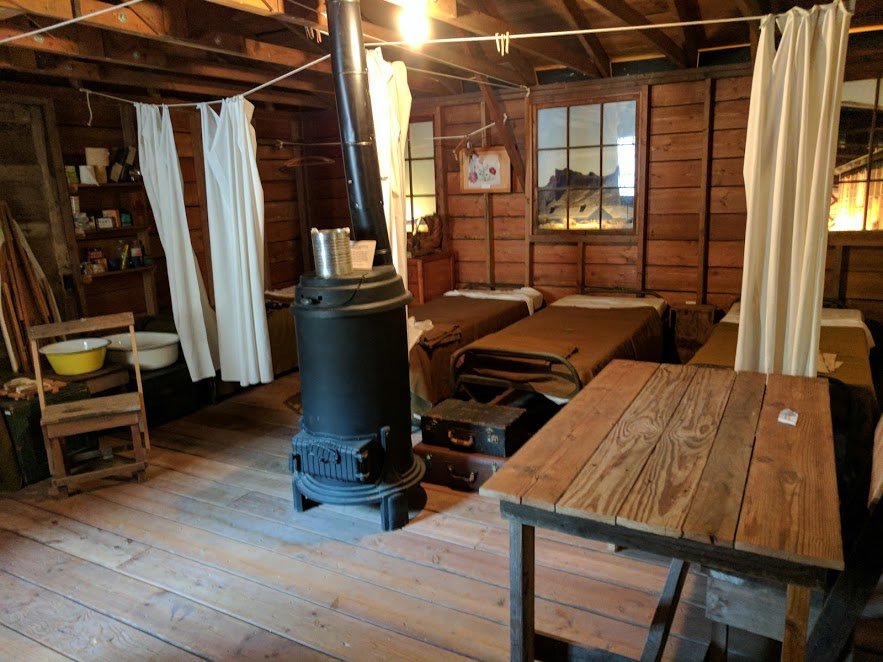 The internment camps for Japanese-Americans during World War II were primitive, at best, for the time.

The room is a grim reminder of the conditions people were kept in for the years spanning WWII. It is eerie, drafty, and dimly lit, with beds lining one wall, separated only by a privacy sheet hanging from the ceiling. Imgaine living in such close quarters for years. A family of six would be crammed into one room, averaging about 20ft x 20ft. The huts were built from green wood, so they would expand and contract depending on the weather, leaving large gaps for the elements to seep through.

Dine in a historic cafe or buy Iron Chef-approved tofu

Roy’s Station
There’s one proper institution in San Jose Japantown and that’s Roy’s Station. The 1935 building was originally a gas (petrol) station belonging to Roy Murotsune and his wife Esther. When Murotsune’s relatives were released from World War II internment camps (see more above), they bought the building on Jackson and Fifth Streets. 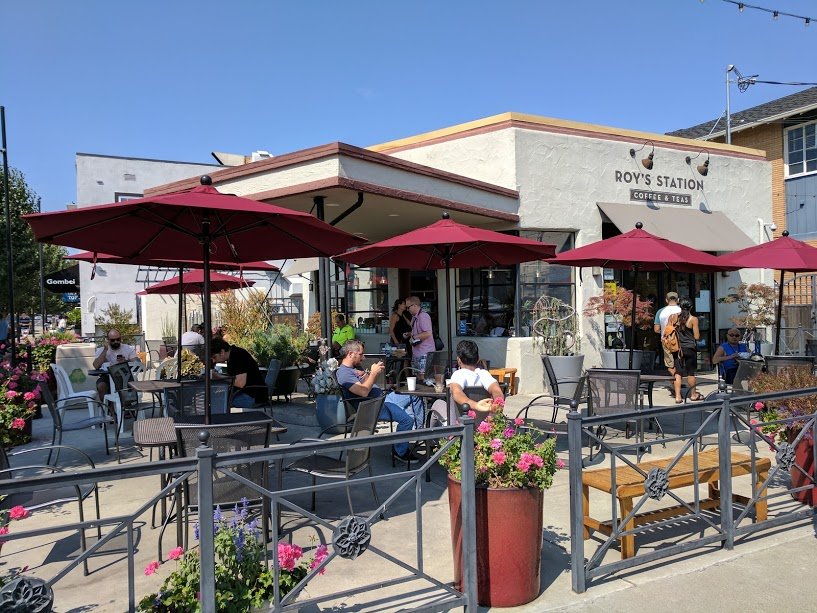 On sunny days you’ll see couples and families enjoying a coffee and pastry from Roy’s Station.

Muratosune and his brothers ran the gas station until 1990. Next door, his other siblings ran an American diner. The building is still in the family though, Murotsune’s children and grandchildren refurbished and opened Roy’s Café in 2009 to honour their relatives.

It’s the place to go for coffee, pastries, or to grab a drink from the 1957 coke machine that’s still selling soda for $1.50.

The store was tucked away on Jackson Street, a door under a blue awning heralding the company name. Be warned though, the space is cramped so you may have to wait outside for a bit before getting your turn to watch them make tofu, and buy some of your own. 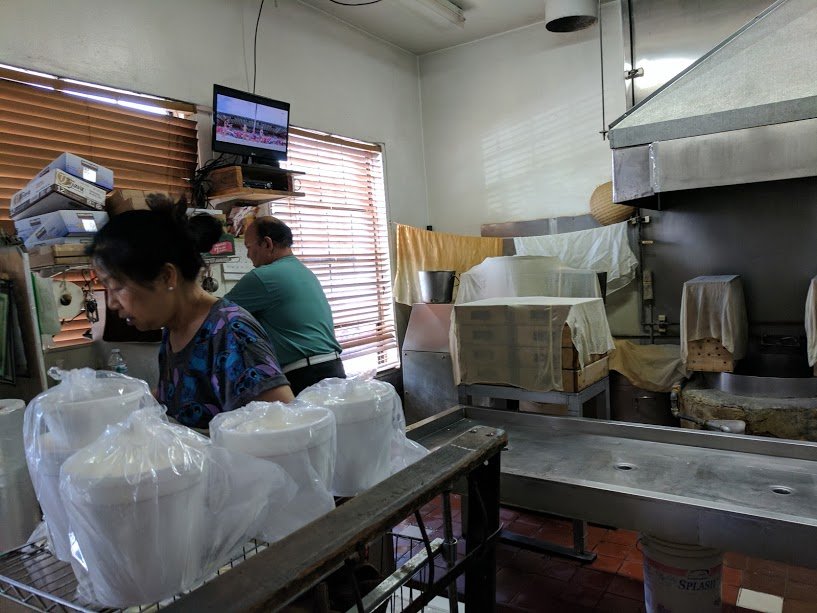 Inside you’ll find the Nozaki’s toiling away in their kitchen of sorts, or selling their wares to eager people from all over the city.

It’s a tiny, cosy space and the shop was started by Chester’s grandfather in 1946, and passed down through generations. Amy takes care of the tofu making while Chester handles the rest of the business. Even Japanese Iron Chef Masaharu Morimoto has sampled the Nozaki’s tofu and wanted to use it at his Napa restaurant. You don’t get much higher praise than that!

Marvel at the Buddhist Church and garden

Traditional Japanese gardens are known for highlighting the landscape they inhabit. It’s impossible to miss the San Jose Buddhist Church Betsuin and its adjacent garden, on North 5th Street. The temple was completed in 1937 and was cared for by an attorney while Japanese immigrants were interred during Word War II. 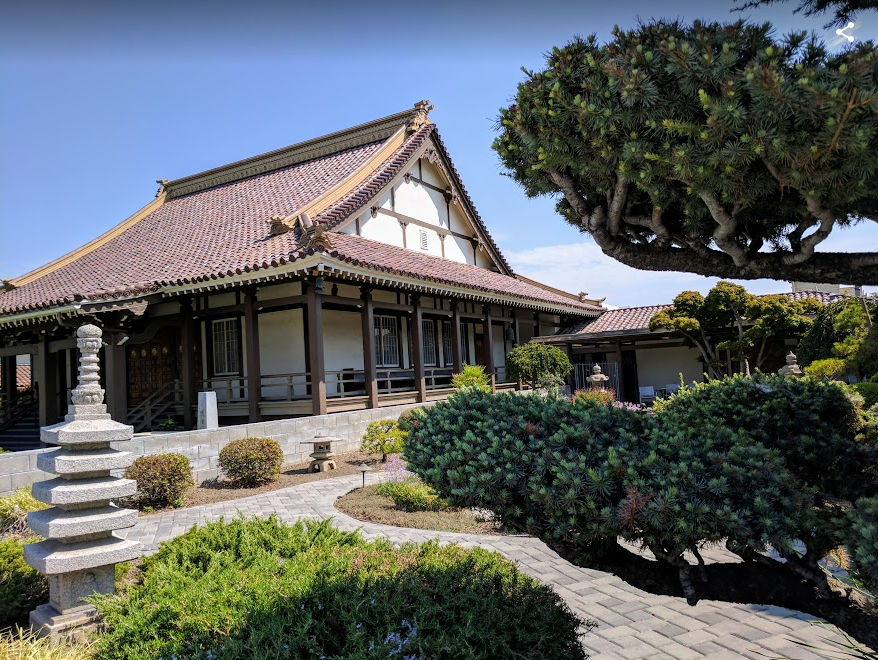 While the building and garden are beautiful, you’ll want to see the Buddhist church from the inside to really experience its beauty.

Betsuin is a term bestowed on temples that have historic or geographic importance. While you can sit in on Sunday services (obviously without disturbing those practicing their faith) to marvel at the beautiful interior, there is another way you can see inside the temple. 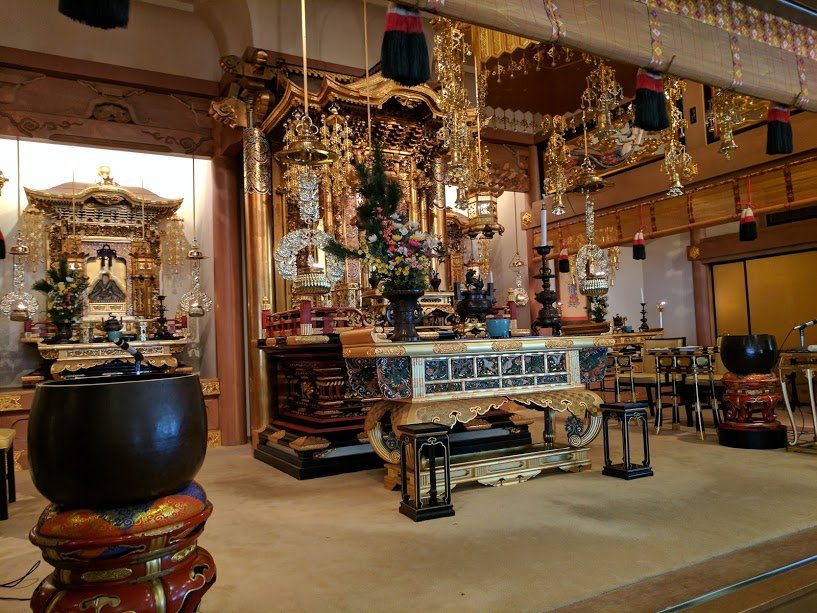 The family affair has been running for more than 125 years and invites the community to witness the thousands of Obon Odori dancers and Taiko drumming groups.

During summer San Jose’s Japantown runs The Jtown Art Walk every third Friday. It’s a way of showing the public everything Japantown’s artistic and creative (think dancers, singers and musicians) residents have to offer. 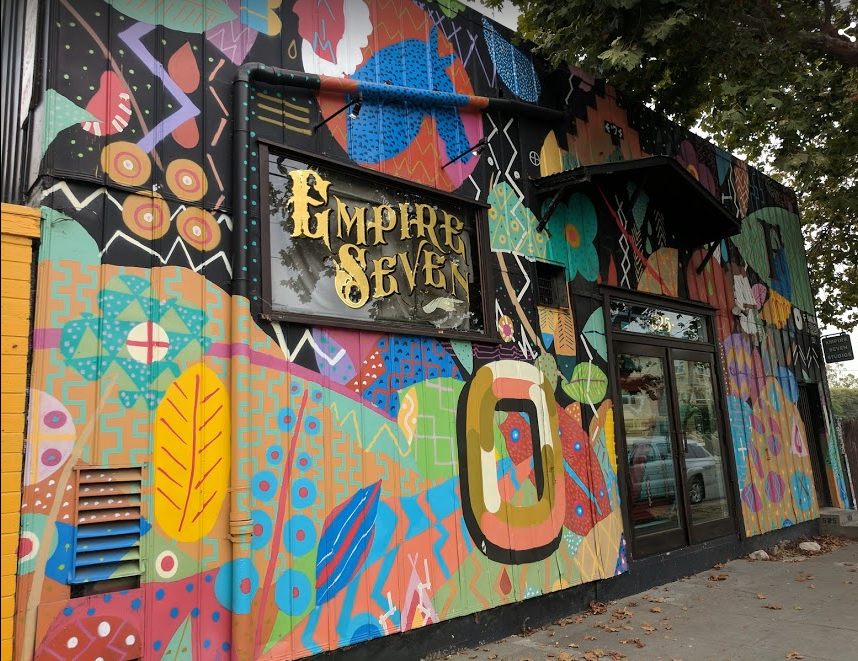 Download the map from the Jtown Art Walk website and take your own tour of vintage, stationary and accessories stores, live music, sushi, ice cream and all of the street and multimedia art you can handle. 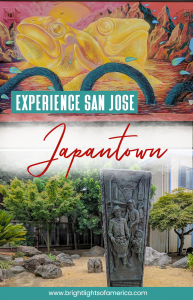