5 Reasons you need to see a US soccer game

Sports are a huge part of life in the US – be it the NFL, baseball, basketball, hockey or soccer.

Getting to a game is on the bucketlist of travellers to the US for good reason. The atmosphere is second to none, you’ve got to try the food, there’s entertainment and giveaways if you’re lucky.

Unfortunately, getting to the NFL or basketball means shelling out hundreds of dollars per ticket even for the nosebleed seats. And, frankly, NFL footballers spend more time lining up and waiting for referee decisions than they do actually playing.

There’s none of that in US Major League Soccer though. Tickets for the San Jose Earthquakes home games, for example, start at around $17 and you can nab some of the best seats for under $100.

And the US soccer teams give you bang for your buck*. I’ve seen a lot of soccer games in my life and the Portland Timbers and San Jose Earthquakes were as entertaining as any EPL team.

CHEER LEADING WITH A DIFFERENCE

Krazy George is a proper San Jose institution, and his claim to fame is that he invented the Mexican Wave. I’m not even joking.

It all began as an “accident” at a hockey game he was cheering at. The feat was repeated at a baseball game on October 15, 1981 when the Oakland A’s faced the New York Yankees in a playoff game. The game and the wave were broadcast on TV, giving it notoriety. 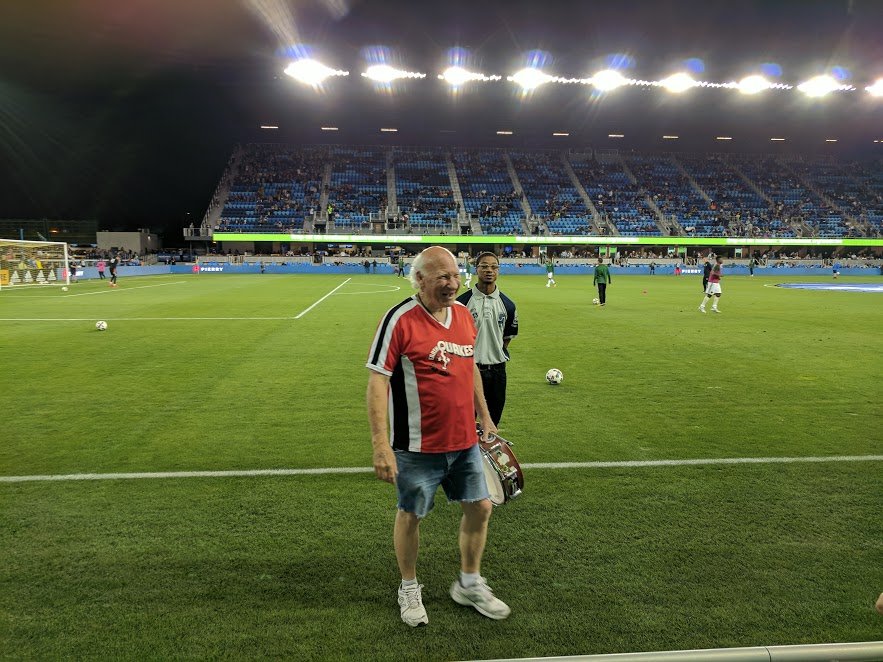 Krazy George Henderson has made a career out of being a professional cheerleader and his gravelly voice and drum beating are all that’s needed to whip crowds into a frenzy of cheering their team on.

There are plenty of places to see Krazy George in action. He’s hired by many teams, but can I suggest watching him rile up the crowds at the soccer? He was first hired by the Earthquakes in 1975 and hasn’t stopped cheering since.

Even when they’re not at the top of the table they’re winners. I’m using the San Jose Earthquakes’ community work as an example here.

Mr M’s parents are what we Aussies would refer to as “dyed-in-the-wool, true blue” supporters. So I’ve heard lots of great Earthquakes stories over the past two years. 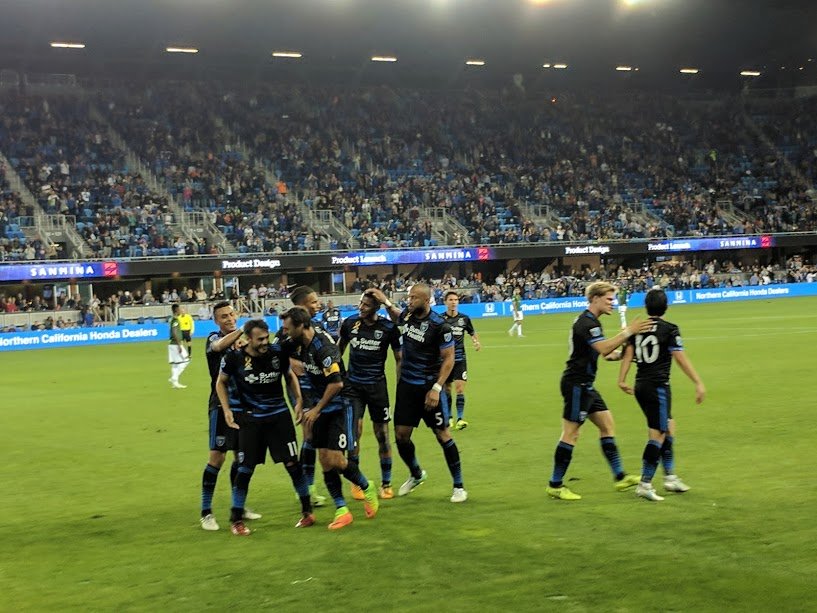 The players are front-and-centre for charity events, donate their own time to fundraisers and then auction themselves as coaches for younger players.

They pour the wine at supporter events and aren’t shy about talking to fans. The team supports San Jose non-profit children’s charities, selling Kicks for Kids tickets that are donated to those charities.

The tickets give disadvantaged kids the chance to be honorary captain for the game and kick the first “goal”. It’s really sweet to watch the joy on their faces.

Avaya Stadium, the San Jose Earthquakes’ home venue, was built specifically for US soccer and opened in 2015.

One of the biggest draw cards is its outdoor bar, which spans the entire North East side of the stadium. 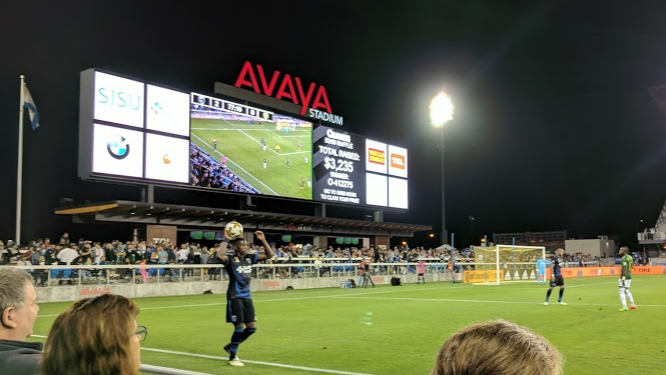 The horseshoe-shaped seating bowl wraps around three sides of the pitch, and has a steep-grade so that even those at the top are closer to the action then at most venues.

But back to the bar. It wasn’t built with the express purpose of breaking North American records but it does. And it provides a grassy spot behind goal for fans to enjoy Beers of the World AND not miss any of the action on the field.

THE US SOCCER GAMES

As with all teams in any sporting discipline, there are going to be ups and downs. However there are plenty of cups and titles to vie for and it’s great fun watching US soccer teams go all out for them. 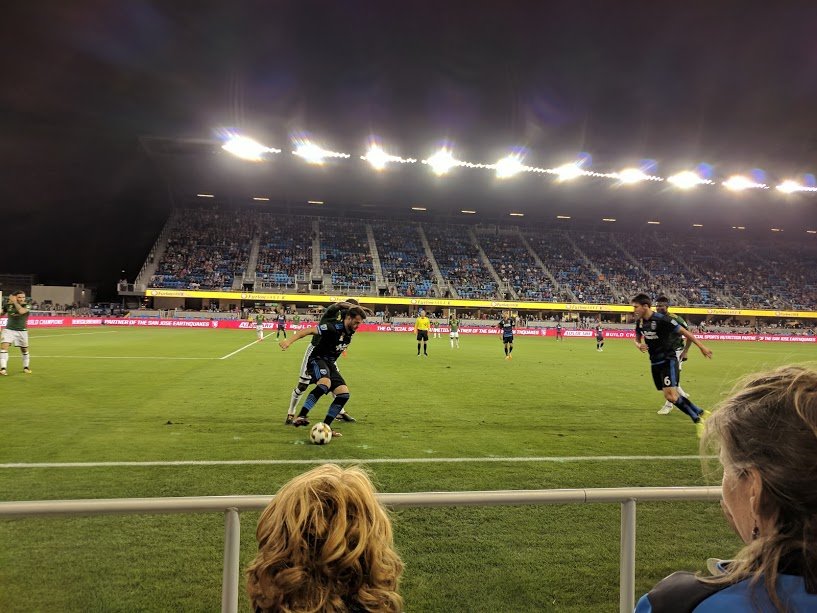 The Supporters’ Shield is awarded to the team with the best record during the regular season and it grants a berth in the CONCACAF Champions League, which sees them play against the top teams in North and Central America and the Caribbean.

At least the US soccer game that I saw live was hugely entertaining. It was fast-paced, both teams played off each others’ strengths and while they weren’t playing as tight a game as their opponents, the Earthquakes sent the Portland Timbers packing anyway.

By now you know that for me, it’s always all about the food. No matter where I am, I need to eat.

And if anyone knows how to do food at a sporting event, it’s Americans. At Avaya Stadium, the spot behind that huge bar is one of the places to sample any number of cuisines from the humble US food truck. 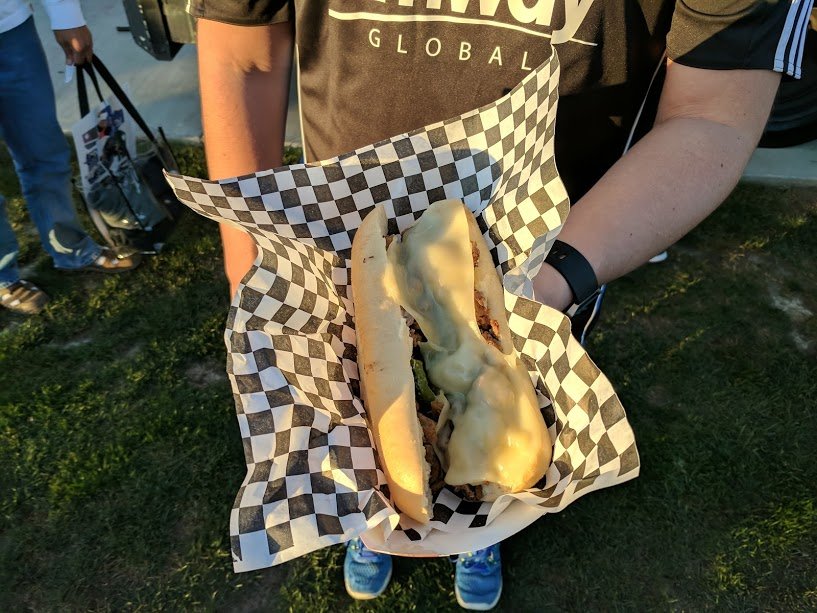 Trucks line the back fence offering all manner of food – from Lebanese (known here as Mediterranean), to Mexican, Asian fusions and Indian food.

If you’re braver than I am you can try the Philly Cheesesteaks, which were reportedly fantastic.

* My new-found love for the San Jose Earthquakes in no way diminishes my allegiance to the Western Sydney Wanderers. They are and will forever remain my #1 team. In case you were wondering.