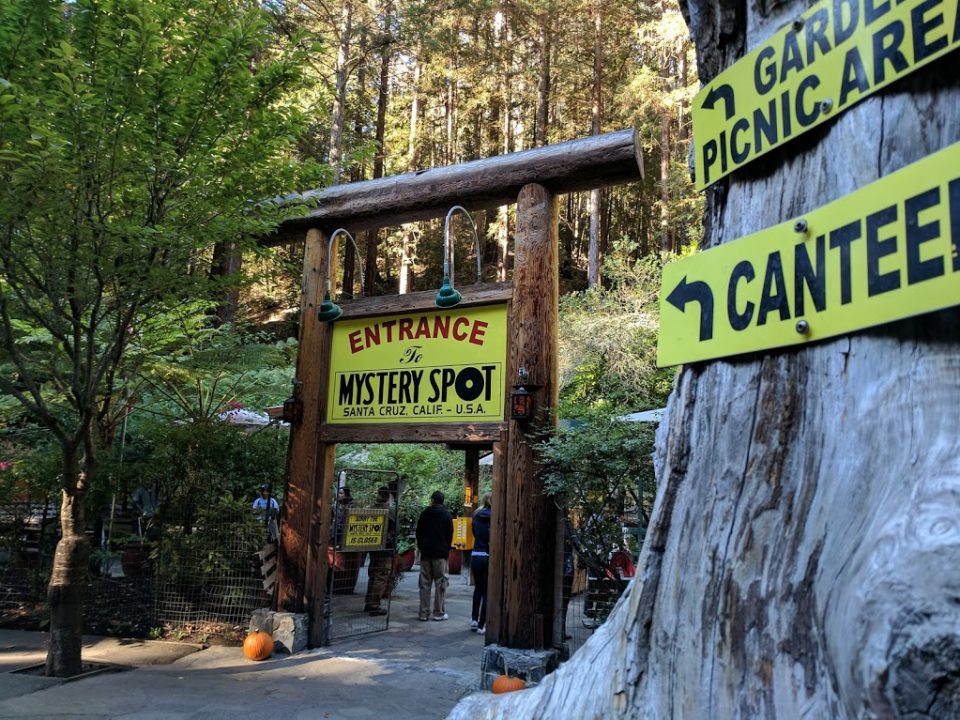 Everywhere I go in San Francisco I see cars with yellow “The Mystery Spot” bumper stickers.

I thought it was some clever advertising for a pub or nightclub. A creepy nightspot with speed dating nights that don’t filter out participants with hygiene issues.

Luckily, and as usual, I was wrong. 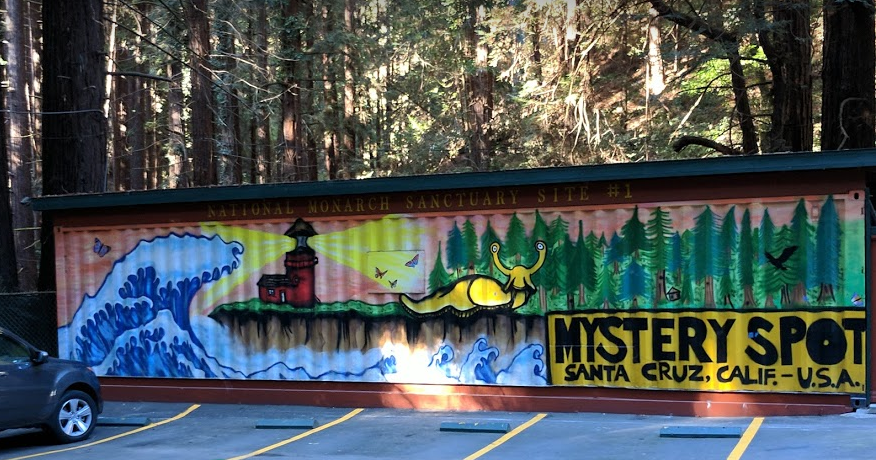 The Mystery Spot is a bona fide tourist spot in Santa Cruz, California. It’s marketed as a “gravitational anomaly” in the middle of a redwood forest and it’s well worth the visit.

It made my head spin in two ways, from dizziness and incredulous-ness (yep, it’s a word now). I’m still trying to work out what’s going on at The Mystery Spot. Allow me to explain.

The Australians in the crowd might be happy to hear that the Redwood trees are joined by quite a few Eucalypts leaning at strange angles. Some even grow in arcs or corkscrews, which is different since they’re usually a straight-up-and-down kind of tree. 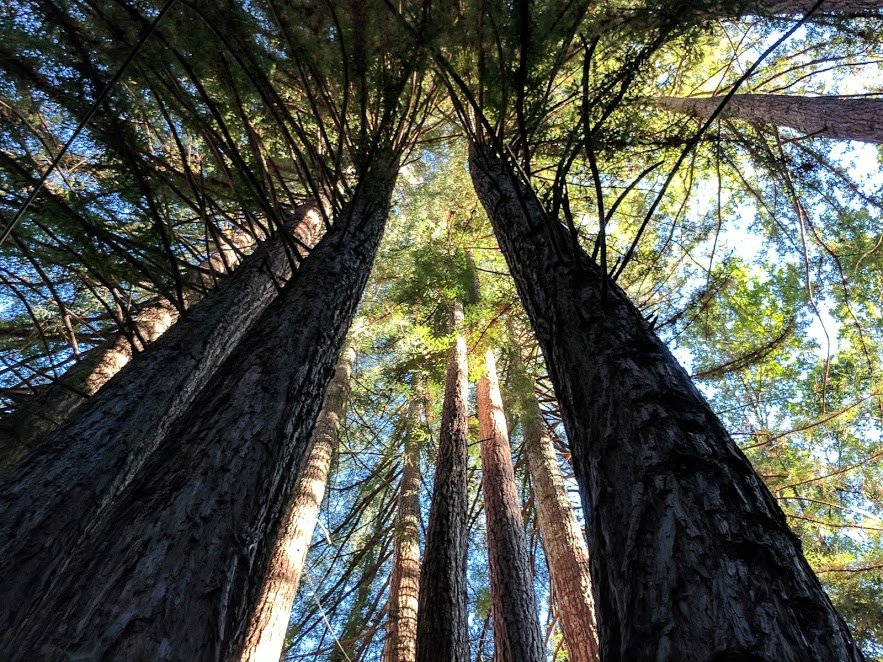 It’s a place where the laws of gravity don’t seem to function in the same way as they do elsewhere in the world.

The land was purchased by George Prather in 1939, who wanted to buy a piece of adjoining flat land from a timber company. But they wouldn’t sell it unless he also bought part of the mountainside.

Specifically, the part of the mountainside that structures seemed to slide down inexplicably. They kept that a secret from young George till after the sale though.

It was turned into a tourist attraction in 1940 or ’41 (depending on the source you’re reading) and is listed as a California Historical Landmark.

You might be thinking that it sounds a little wishy-washy in terms of a tourist destination, but you’re wrong. 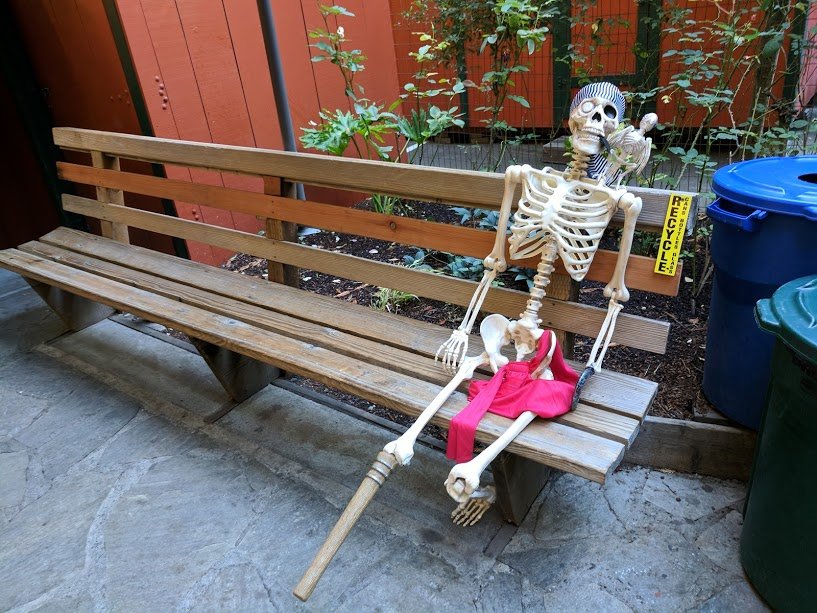 For your $8 entrance fee you get a 45 minute tour up the mountainside to a cabin that defies gravity. With lots of spirit level demonstrations to boot.

Be warned though, if you’re prone to vertigo or dizziness, this might not be the place for you. I felt pretty disoriented for most of the time that we were up there.

Bright and early on a Sunday morning, our tour guide Anna had to deal with a less than excited group of sight seers.

But she soldiered on and by the end we were all laughing like kids and pretending to be Superman. More on the superhero antics later.

After a bit of history we climbed a little way up a hill. Not a particularly steep one but it took the wind out of me. That’s because it feels like an invisible force is trying to push you back down.

GRAVITY AND THE MYSTERY SPOT

The cabin is quite obviously slanted down the hill, and yet, standing outside its front door, you lean in the opposite direction.

You’re a human who’s probably mastered the art of standing up straight (let’s leave my hunchback out of this). But things are different at The Mystery Spot.

Instead of standing straight or even leaning “down” the hill, you’ll very noticeably be leaning up it. Except you won’t notice it until you look around and see everyone else leaning. 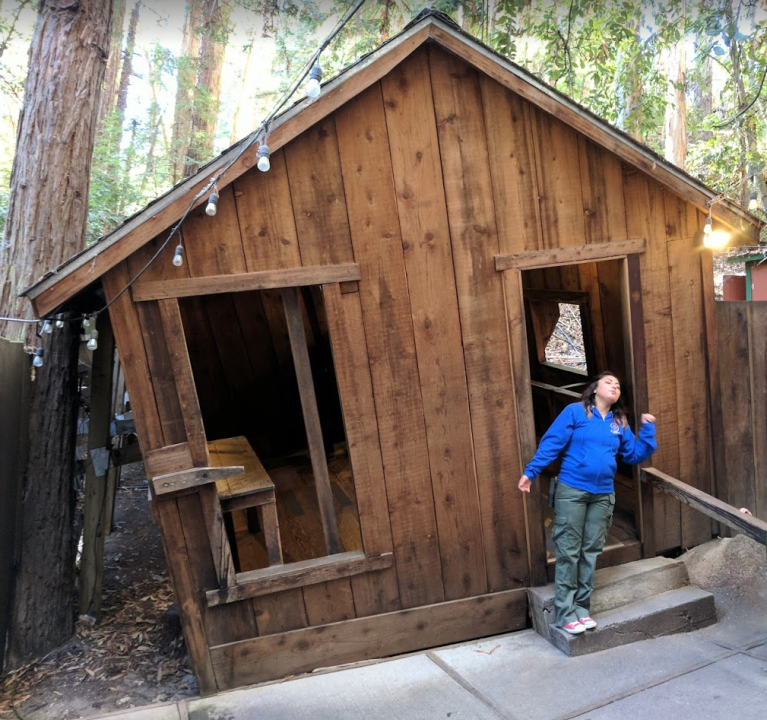 Then there’s the board “trick”. You’d think that placing a wooden board at an angle through the cabin’s windowsill would send any object placed on it careening to the lower side.

Not at The Mystery Spot.

Now it’s time to hold onto your hats and step inside. The cabin has two rooms – the first holds a table and a bar to swing from, the second has a hanging weight and some “stairs”. 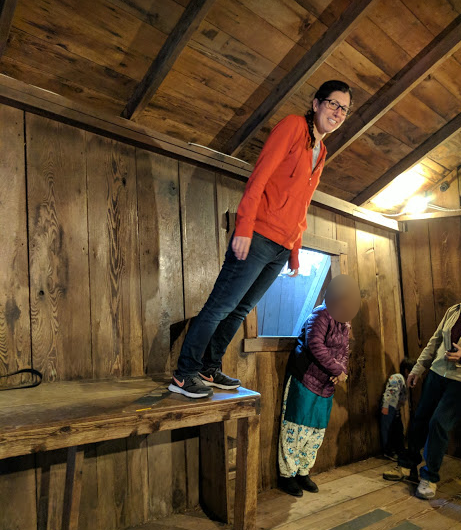 This is where my superhero impression comes in. Standing on the flat table (proven with that spirit level I mentioned before) you lean right out over the edge at an angle that would see you tumble over in any other normal place on earth.

So of course we all pretended we could fly. 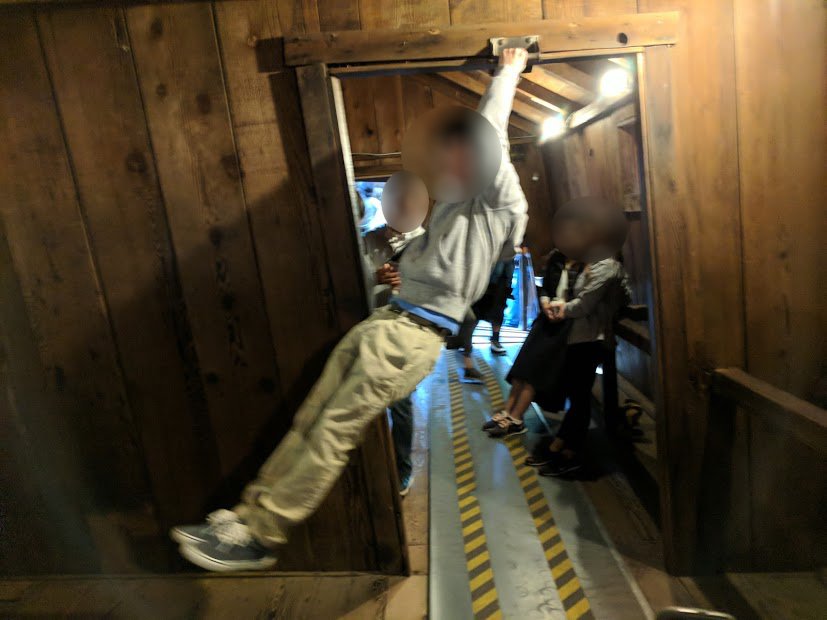 Then there’s the bar (kind of like a chin up bar) placed over the door jamb. Usually when you pull yourself up your legs point straight down.

At The Mystery Spot, as soon as your feet leave the floor they’re swept downhill significantly. It’s so strange to watch.

As for the pendulum weight, it swings uphill but not downhill. And a set of ladder rungs bolted to a wall feels like you’re walking up stairs, not precariously teetering on a ladder.

Of course I’m leaving bits and pieces out, you’ll need to go to The Mystery Spot to experience it for yourself.

But it’s a great way to spend an hour and kids will be fascinated by the experience.

Tips: Buy tickets from the website in advance so that you’re not disappointed on the day. Tours can sell out in advance.

Amenities: There are bathrooms, a gift shop, picnic tables and a “Snack Shack” with  food like hot dogs and nachos (plenty of vegetarian options).

What else: If you want to spend a bit longer at The Mystery Spot, take advantage of the hiking trail loop through the redwoods. 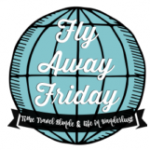 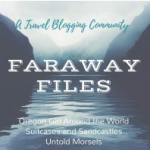