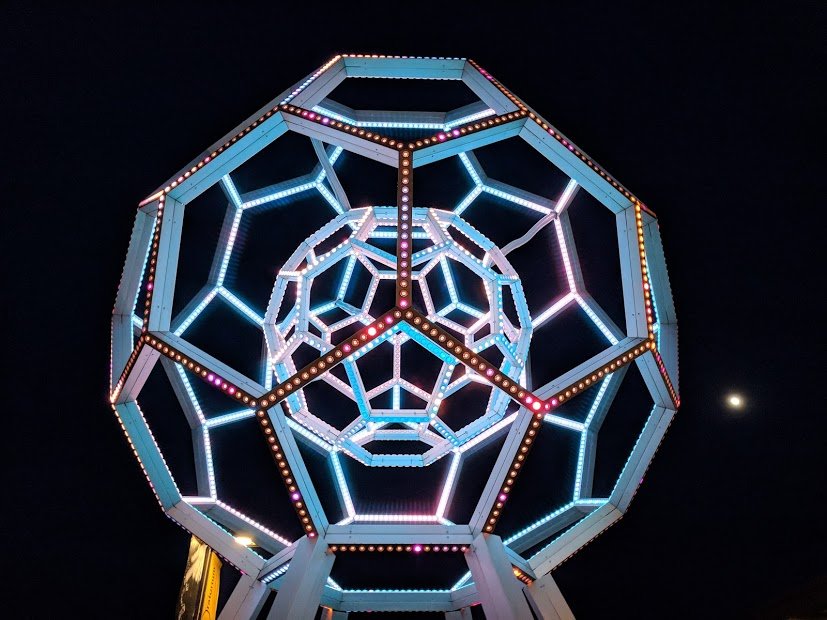 Experiencing a city like San Francisco at night is the way to fall head-over-heels in love with a place.

Sure there are gorgeous coastline views, iconic bridges and stretches of National Parks that will widen your eyes to saucers.

But light art pieces scattered around a city make you feel like you’re somewhere special that values the beauty as well as the functionality of its space.

Illuminate SF began as the Festival of Lights back in 2013, running as a two month show of night time activity in San Francisco.

Beginning on Thanksgiving evening and ending on New Year’s Day, the festival made such a big impact on locals and tourists out for a memorable night in San Francisco, that it stuck around. In part anyway. 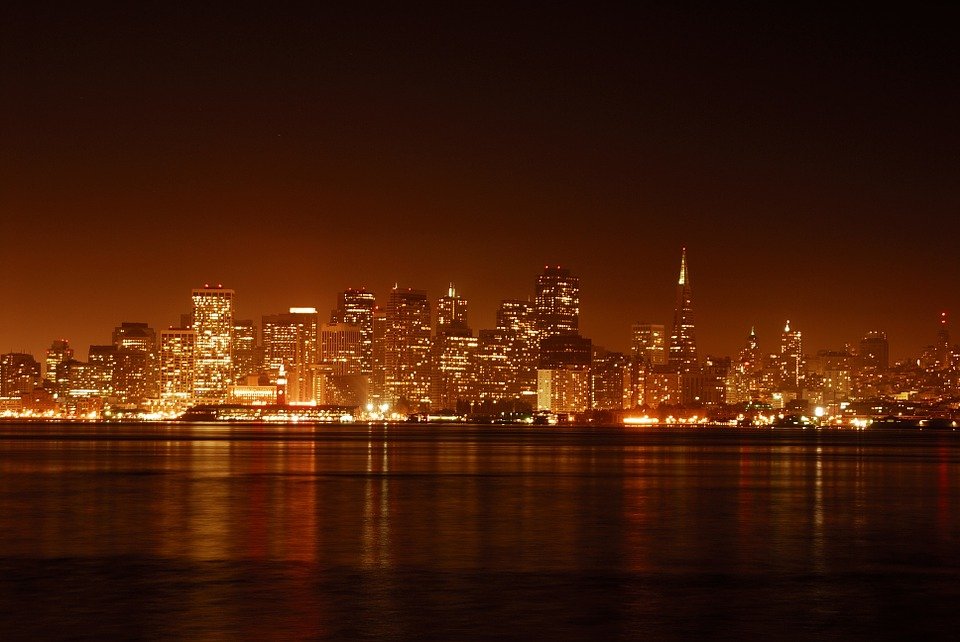 Since the inaugural Illuminate SF, some displays have been made permanent, while others are only commissioned for the yearly festival.

During the two months to the new year, the San Francisco Festival of Light includes light art  and museum tours, talks with the artists, and free guided tours.

But if you’re not lucky enough to be visiting during the festival, don’t fret, a big portion of the light art pieces have been made permanent. And they’re sprinkled around San Francisco liberally.

It’s easy enough to create your own San Francisco night tour of the Embarcadero and through the many neighbourhoods.

While you’re marveling at the architecture by night, you’ll be getting a different view of the regular San Francisco tourist spots.

Light art is scattered through 17 different neighbourhoods and most of them are free to view. Some are inside the San Francisco International Airport though, so if you’re flying in or out, you’re in luck.

I’ve created a few Illuminate SF itineraries that group the closest and most easily accessible light displays together to make it easier for you to get around.

Just pick one, depending on where you’re staying or where you’ll be for dinner and go from there!

There’s just a couple of things you’re going to need for this San Francisco by night tour:

A QUICK STROLL THROUGH NORTH BEACH

The north-west corner of San Francisco is unsurprisingly home to North Beach, a mix of famous tourist stops and beautiful neighbourhoods.

There are three spectacular pieces of light art that I’d recommend you visit. It won’t take long, and I’ve even got a little bonus for you.

We begin at church. Actually, at a cathedral – Grace Cathedral (1100 California Street, San Francisco) to be exact. 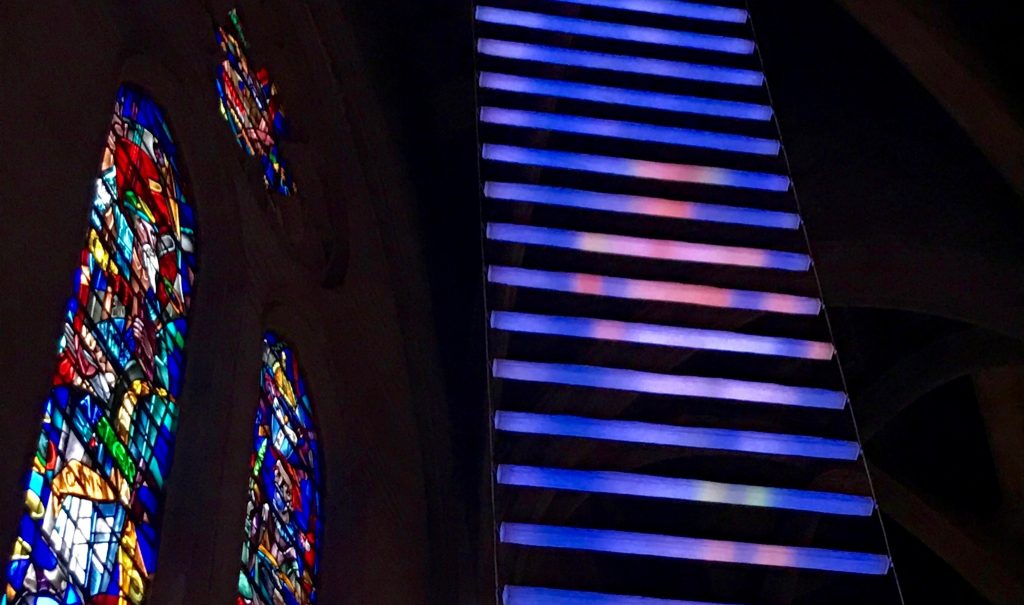 Inside you’ll find Jacob’s Dream: A Luminous Path, lit up day or night (open 8am-6pm). That’s apart from the beautiful architecture, stained glass windows and the labyrinth on the stone floor.

Created by Benhamin Bergery and Jim Campbell, the artwork is based on the ladder Jacob dreams about in a bible story. Look closely and you’ll see figures moving up and down the ladder.

2. Language of the Birds

A 15 minute walk brings you to a busy part of San Francisco. The North Beach Plaza holds the historic City Lights bookstore, but we’re looking for a former topless bar. Actually the second-best known topless bar in San Francisco called El Cid, if you believe the internet. 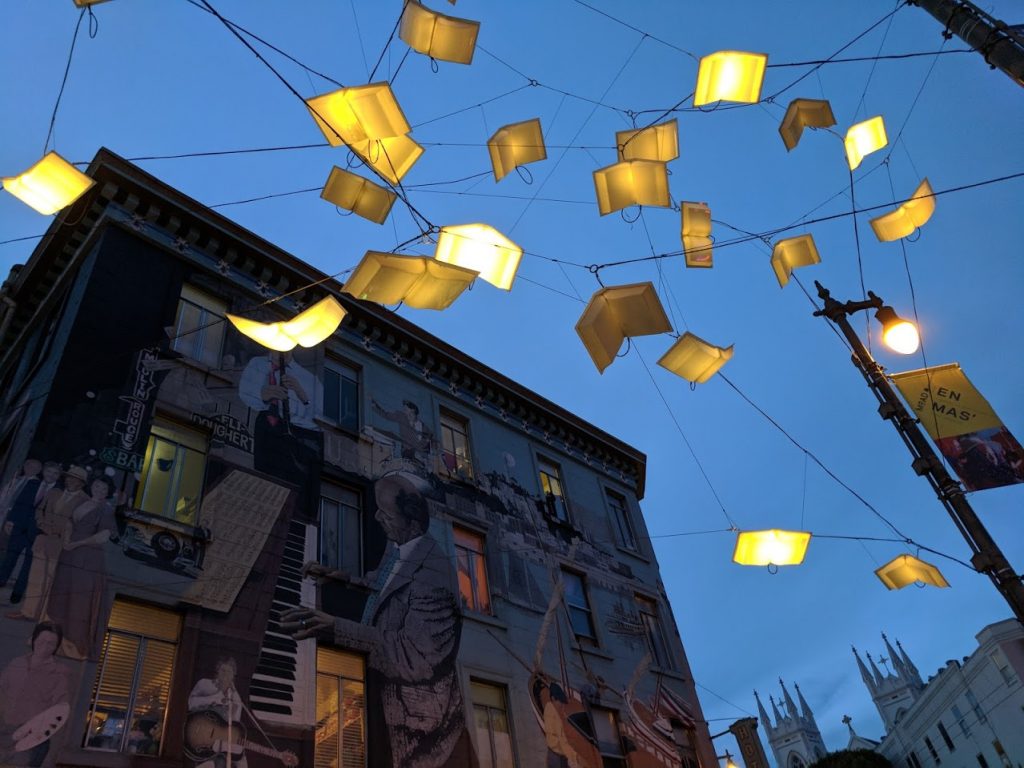 Now it’s a Chinese restaurant, but it’s also where DJ Tom Donahue discovered The Beau Brummels. Hence the mural covering the building. In front of that building you’ll see illuminated books flying like birds, suspended above the plaza.

Created by Brian Goggin and Dorka Keehn, the work uses solar power and at night runs through a lighting sequence.

You can either take a 30 minute stroll or catch a taxi/uber to 344 The Embarcadero to see The Bay Lights. There are good vantage points of the bridge’s west span on The Embarcadero so take your pick and get ready to have your breath taken away. 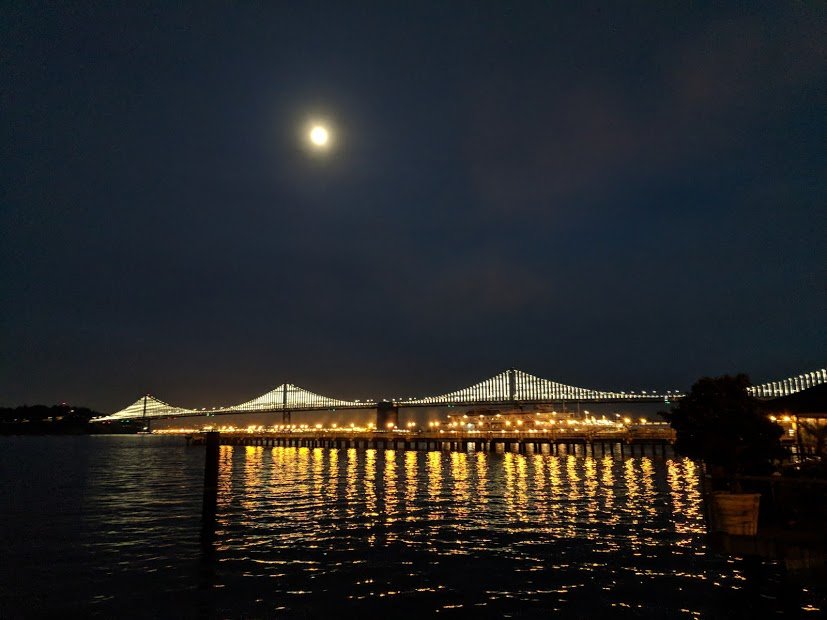 Renowned light artist Leo Villareal lit up The Bay Bridge in 2013 after a group called ILLUMINATE formed to create and commission uplifting works of public art. It is created from 25,000 individually programmed LED lights that sparkle and twinkle in a never-repeating display across the bridge.

I’m calling this the ‘bonus’ because it was a temporary display for 2017’s San Francisco Festival of Light. It wasn’t a permanent display so you can’t visit it anymore, but I can show it to from my visit. 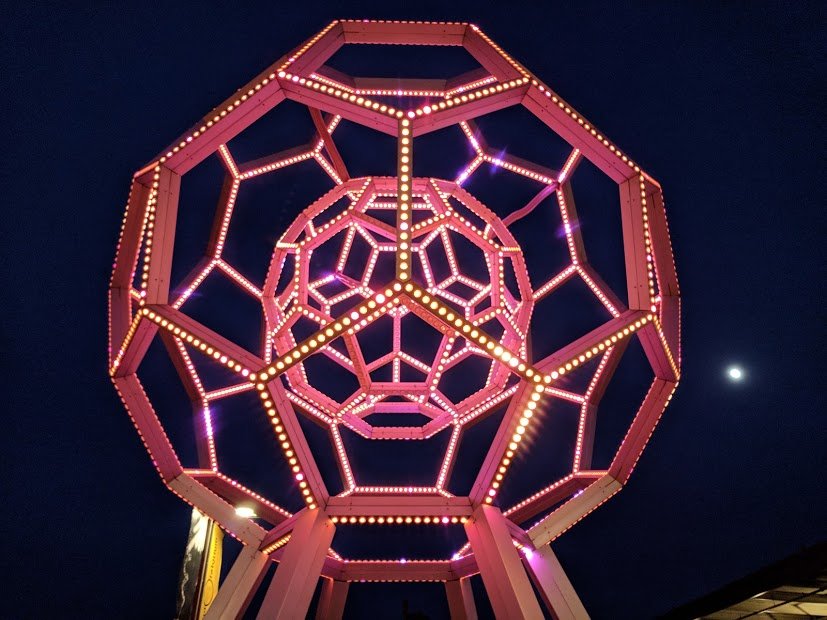 Buckyball was situated just outside the Exploratorium (Pier 15, The Embarcadero) and was also created by Leo Villareal, which is probably why it’s so mesmerising.

The illuminated sculpture was programmed by Villareal using custom software and displays more than 16 million distinct colours over its array of pentagons and hexagons.

Central, or mid Market, is a mix of tourist spots, tech giants, shopping in restaurants. It also has its fair share of light art and it’s a good place to while away your San Francisco evening.

There are six great displays scattered over the area that are all within walking distance.

You’re used to looking at pedestrian signals at traffic lights, you probably don’t even register them much anymore. But you’ll notice Matthew Passmore’s on the corner of McCoppin and Valencia streets. 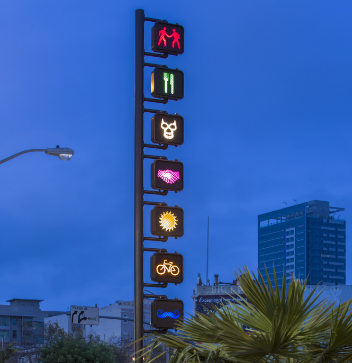 Handsignals was a project of MoreLab replaced the customary Walk/Don’t Walk flashing signs with symbols that are more in line with the Mission District’s vibe. It’s playful and fun.

Another bonus round, because this one was scheduled for removal in January 2017. When I got to Patricia’s Green in Hayes Valley (just off Fell Street), I felt like I was in a little corner of Pan’s Labyrinth. 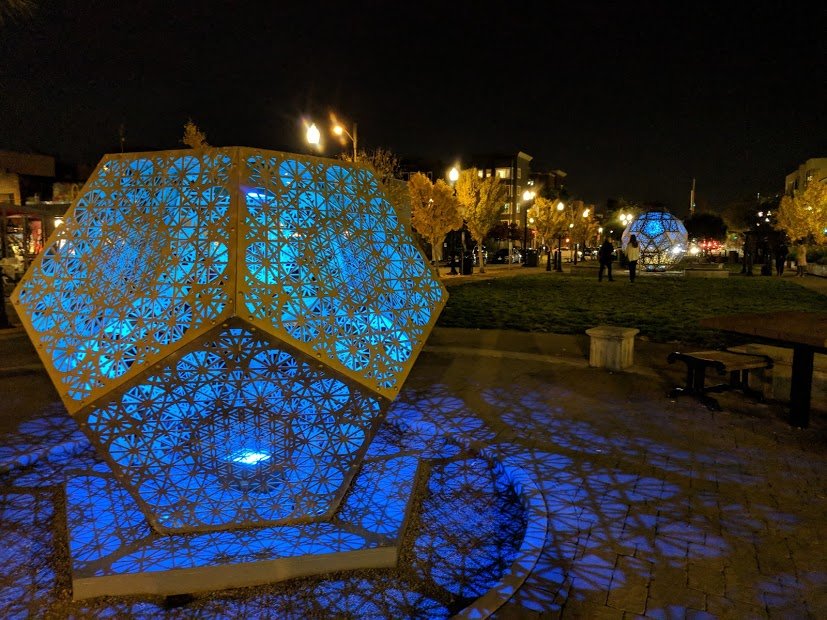 The geometric sculptures, created by Yelena Filipchuk and Serge Beaulieu, are shaped in hexagons of varying sizes. The beauty is in the designs that have been laser-cut into the panels that make up each shape.

They cast patterned coloured light across the green grass of the small park. The lights are programmed respond to noise, so do a bit of talking and see what happens! 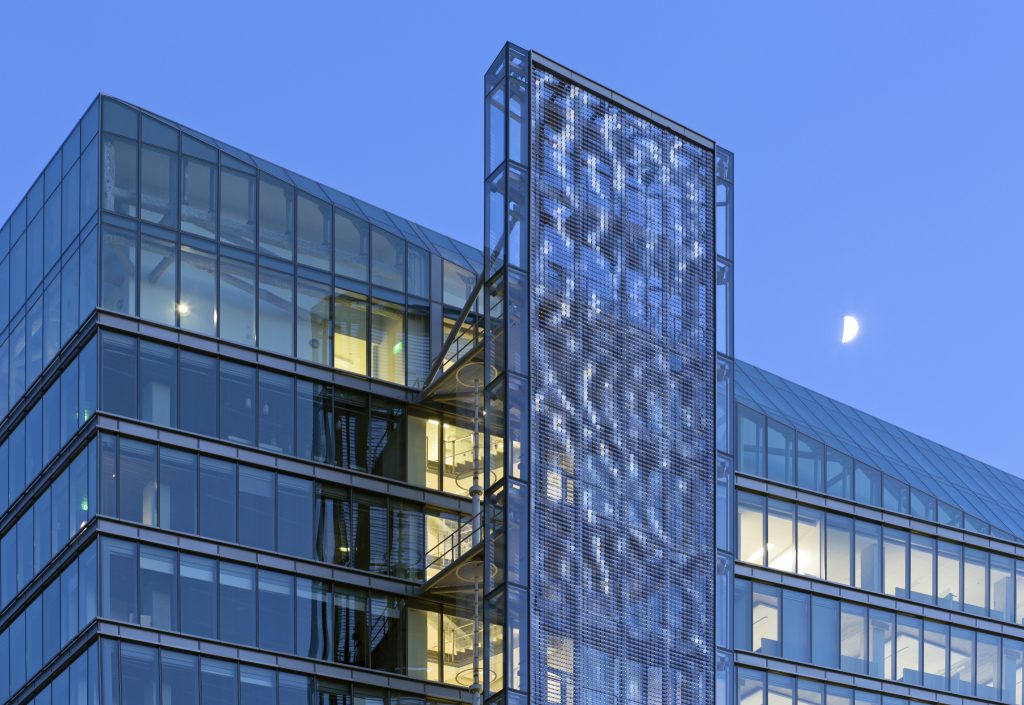 The 12-story sculpture looks like rippling waves of glass during the day, but at night, tiny lights flicker throughout the piece to look like fireflies darting through the night.

Walk behind the grand staircase, then look up. You’re staring at Nayland W. Blake’s light art work, created in the Beaux Art Tradition. The names of 160 authors, whose works grace the library’s collection, have been etched onto glass and suspended in front of lighting that gives the illusion of stars.

To read the names, take a walk upstairs.

Onwards to the AVA apartment building (55 9th Street, San Francisco) for a taste of whimsy. This is a place where piano-shaped objects hang from buildings. 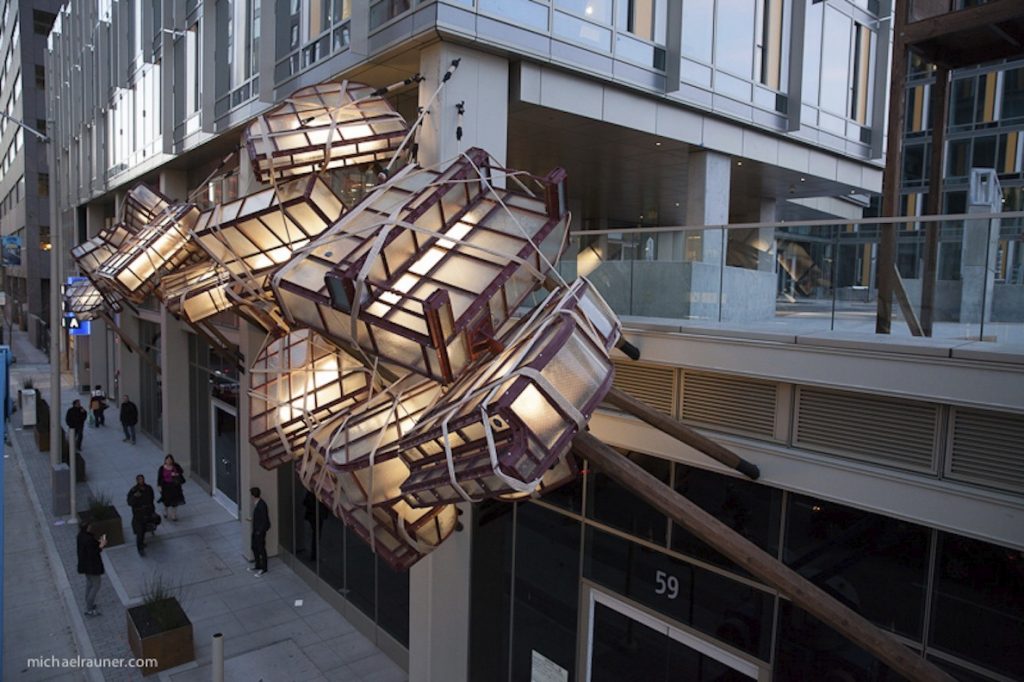 Artists Brian Goggin and Dorka Keehn put together the piano canopy from glass and steel salvaged from warehouse windows. Tied together with rope and supported by wooden braces, the piece is fully secure, so you don’t have to worry about a Warner Bros.-style cartoon accident.

During the day you’ll see prisms of light reflected onto the footpath by the sun shinning through the glass. At night they are internally lit, and flicker to the music of Enrico Caruso’s operas if you tune into 90.9FM between 4pm and 10am.

It’s nestled on the south facade of the building, inside a three-story opening on the building. Inside are neon lights that glow into a single block of colour  and ribbons of light extend across the building.

Located just south of Market Street, the Yerba Buena district is a perfect place to explore after dark if you’re staying in the heart of the city.

There are eight light displays in a two block radius and it doesn’t take much walking if you’ve already been shopping at Westfield or strolling Union Square a little earlier. 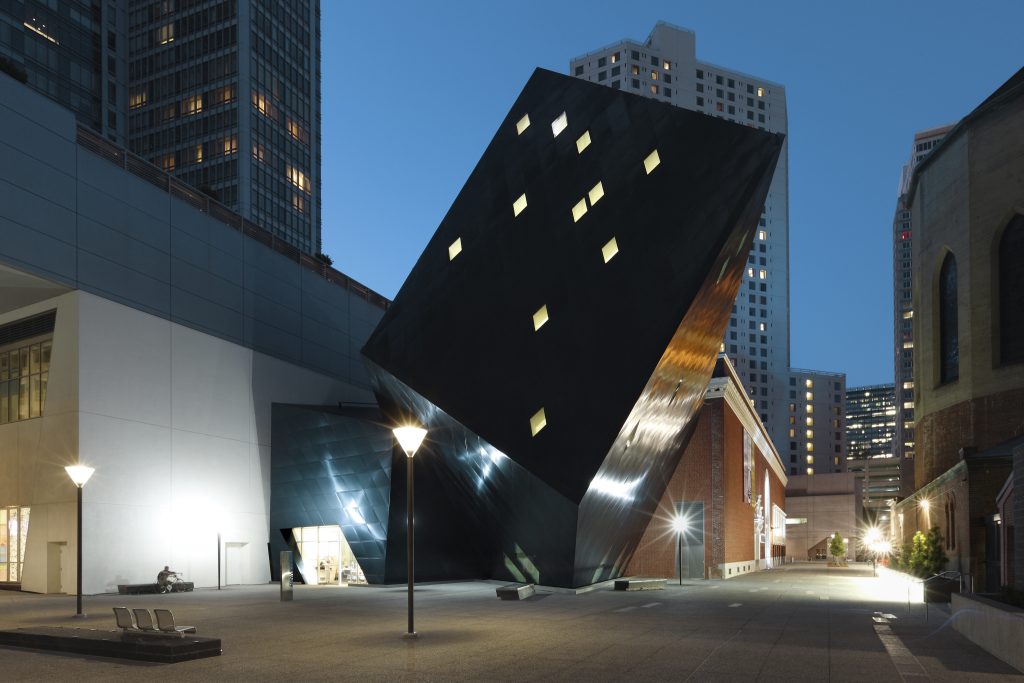 Artist Daniel Libeskind arranged 36 diamond windows into the steel to create a beautiful contrast at night when viewed from outside. During the day you can enter the museum (Adults $14, Under 18s free) and see the shafts of sunlight pour through.

2. Lamp of the Covenant

As you can guess, we’re staying at the Jewish Contemporary Museum for this one. Only really visible during opening hours (11am-5pm daily, except Wednesdays when it’s closed and Thursdays 11-8pm), this display was created by David Lane.

Once you arrive in the lobby look up. The Lamp of the Covenant refers to the light that is placed over a synagogue altar, although in this case it’s made of globes and other antique objects.

Our last stop within the museum is for another Daniel Libeskind piece. It is also in the lobby, but is slightly more metaphorical. The lights are embedded in the lobby wall, spelling the Hebrew word for orchard. 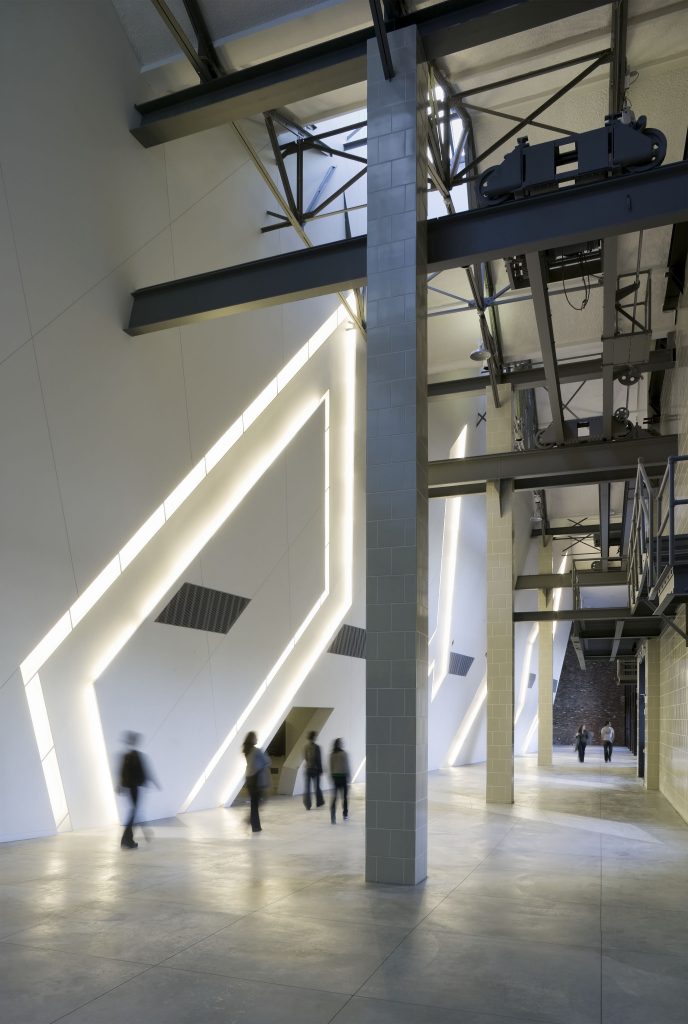 Libeskind is referring to the knowledge and insight that the museum offers as an orchard.

It’s time to leave the museum and head over to Annie Street (between Mission and Jessie streets). Look up and back in the direction of the museum and you’ll see the neon Love Over Rules sign. 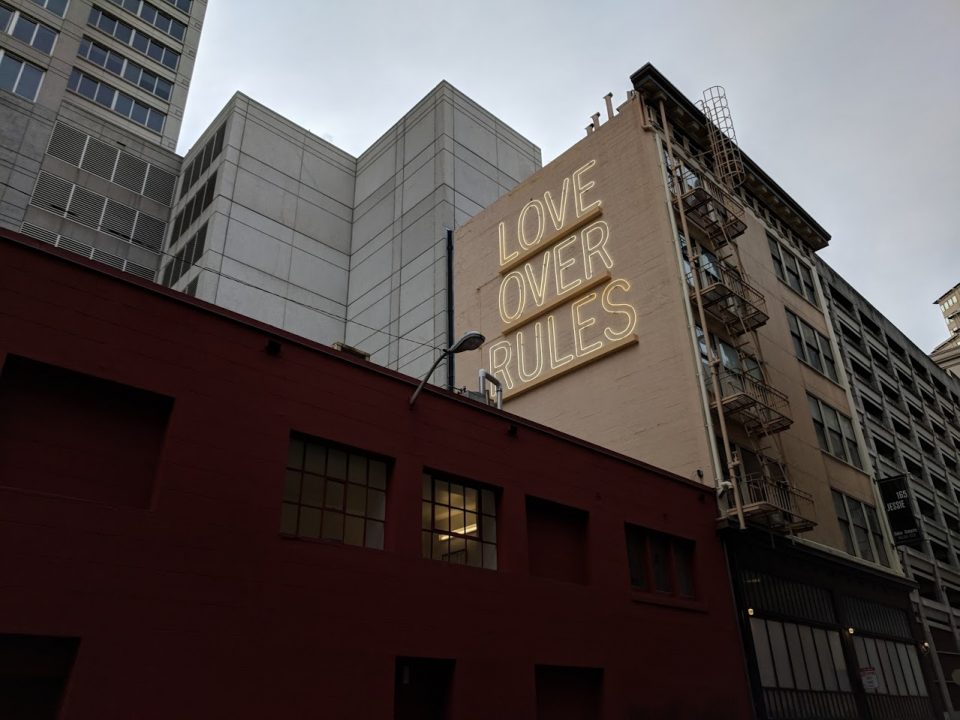 Created by Hank Willis Thomas in 2017, Love Over Rules were the last words the artist’s cousin spoke to him before he was murdered.

“I grew up in a family where love overruled,” Thomas told the California Historical Society.

“My cousin, Songha Willis, was murdered in Philadelphia in 2000. A month after he died, I found a recording of the incident, and his last words were ‘love over rules’.”

Onto the San Francisco Museum of Modern Art (151 Third Street, San Francisco) for the next few displays. You’ll have to buy a ticket online or at the museum for these (Adults $25, under 18s free). Head up to the fifth floor and enter Pop, Minimal and Figurative Arts: The Fisher Collection.

The collection includes work by artists like Andy Warhol, but we’re here to see the work of Russian artist Dan Flavin. His light art is a tribute to fellow Russian Vladimir Tatlin, a painter and architect who championed the avante garde movement in the 1920s and was passionate about bringing art and technology together.

Also by Flavin, Untitled can be found within the same collection and is difficult to miss. The colourful display spans the rainbow with ten lamps soaring eight feet high.

After all of that walking and looking thoughtfully at museum pieces, it might just be time for dinner. Luckily the next stop is a restaurant. 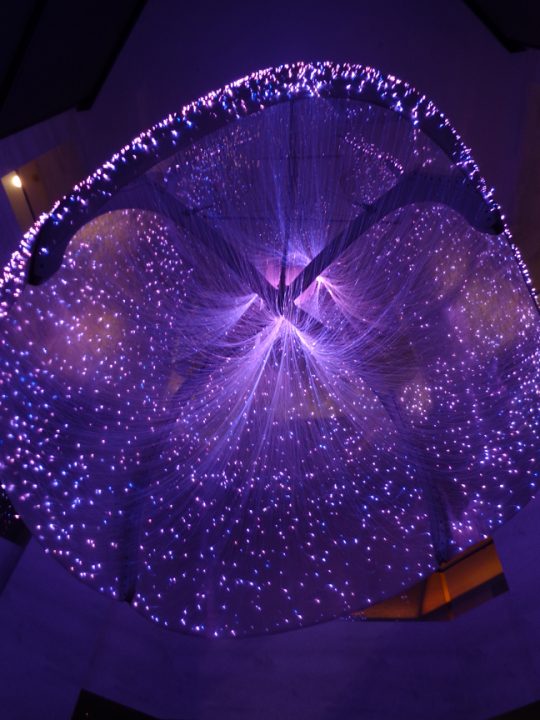 The light sculpture is based on “cosmic star clouds, bioluminescent jellyfish and the brain’s neural networks”, according to its creators.  It’s got 7,000 fibre optic strands threaded into it, so you know that I’m not exaggerating when I say that it’s impressive.

Over on the other side of the building is the hotel lobby. Above the check in desk you’ll see a twinkling map of San Francisco at night. 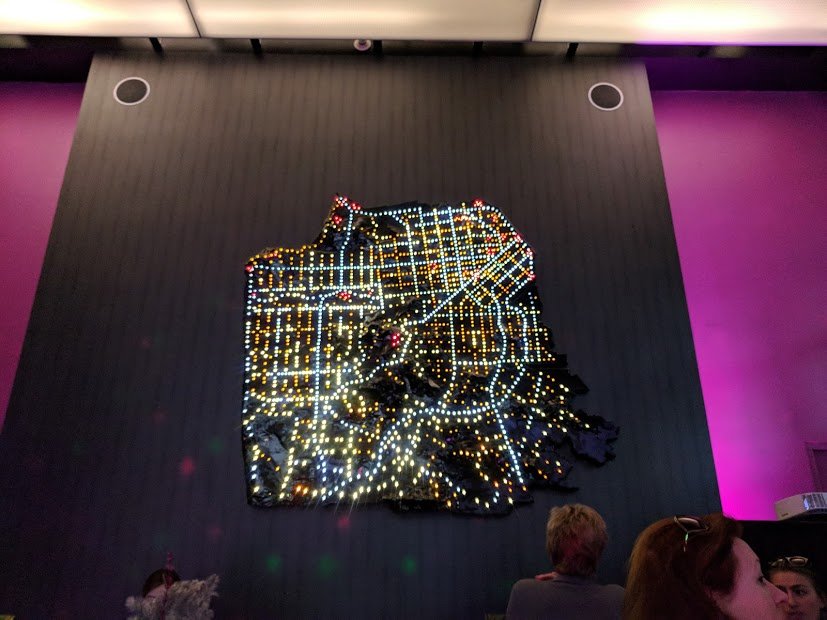 Created by Lisa Gemmiti and a team, a 3D topographical map of the city was created and 2,000 LED lights were installed. Look out for the red lights, which pinpoint some popular spots that you may want to visit on your trip.

This is just the tip of the iceberg when it comes to light art in San Francisco. Groups like Illuminate and Illuminate SF are constantly adding new works to the already-thriving art scene.
Visit their websites for more information and more light art itineraries.