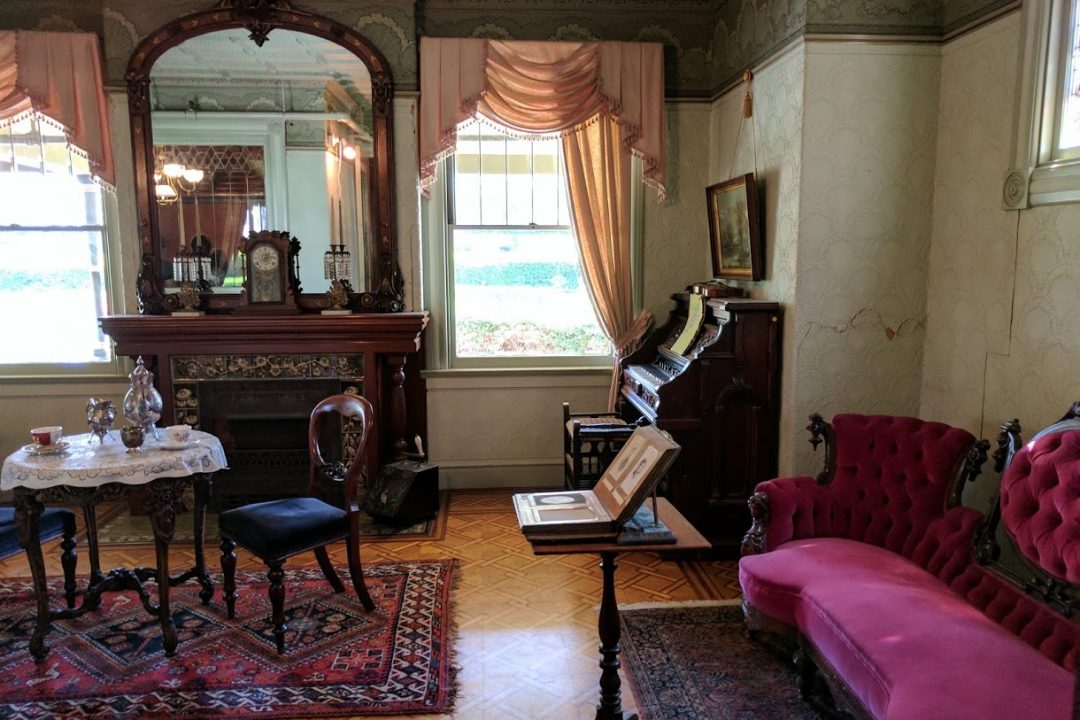 Taking a Winchester House virtual tour has been a little tricky since the contract for a movie about Sarah Winchester, played by Helen Mirren, was signed.

Winchester will hit theatres in the US on February 2, 2018, and has been in production for a few years. But from the time the ink dried on the film contracts to now, visitors weren’t allowed to take photographs inside the house.

It’s a rule that is heavily enforced by Winchester House tour guides, along with the “no touching” rule that hopes to preserve the mammoth mansion.

Disclosure: Winchester Mystery House kindly led a bloggers tour of the mansion and allowed us to photograph it from the inside. While the tour was free, as always, my views are honest and my own.

Before we head inside on the Winchester House virtual tour, we should probably run through some of the history of the place. 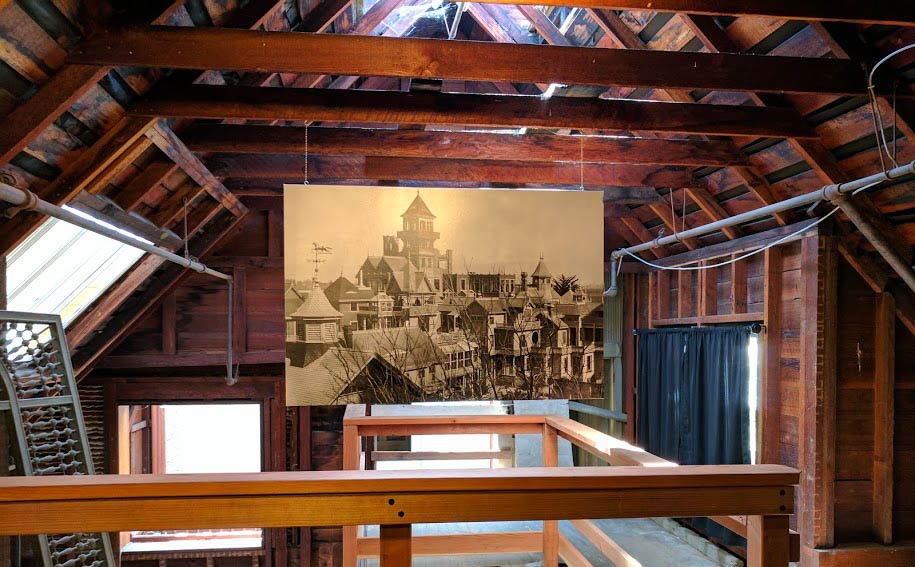 Winchester House was seven storeys tall before the 1906 earthquake

You can read up on it all here, but in a nutshell the Victorian house and gardens were once home to the richest woman in the country, Sarah Winchester.

Sarah was born sometime in the decade from 1835 (records aren’t definitive) in New Haven, Connecticut to Leonard and Sarah Pardee. Her father built carriages and made his money during the Civil War by making ambulance carriages to the Union.

Sarah would have been known as a well-rounded young woman. She had more than four languages under her belt, was a talented musician and attended Yale College’s female arm, the Young Ladies Collegiate Institute.

It was no surprise then, that she married the heir to the Winchester Repeating Arms fortune, William Wirt Winchester in 1862.

The couple’s only child, Annie Pardee Winchester, was born four years later but their joy would be short lived. 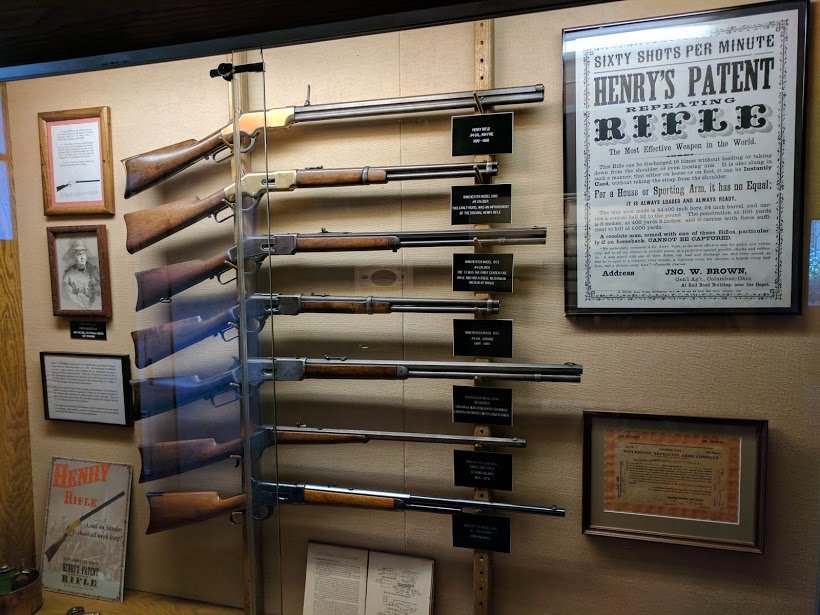 Annie survived just forty days – her body was not able to metabolise proteins, leaving her severely malnourished. Her death left a lasting sorrow on her parents, but it was not the last that Sarah was to face.

William’s father died in 1880, leaving the Winchester Repeating Arms Company to his son. But a year later William succumbed to tuberculosis. The deaths left Sarah with $20 million of inheritance and almost half of the stock in the company.

The fortune made her one of the world’s richest women and she spent a few years traveling Europe before moving to California in 1886, to what is now San Jose. 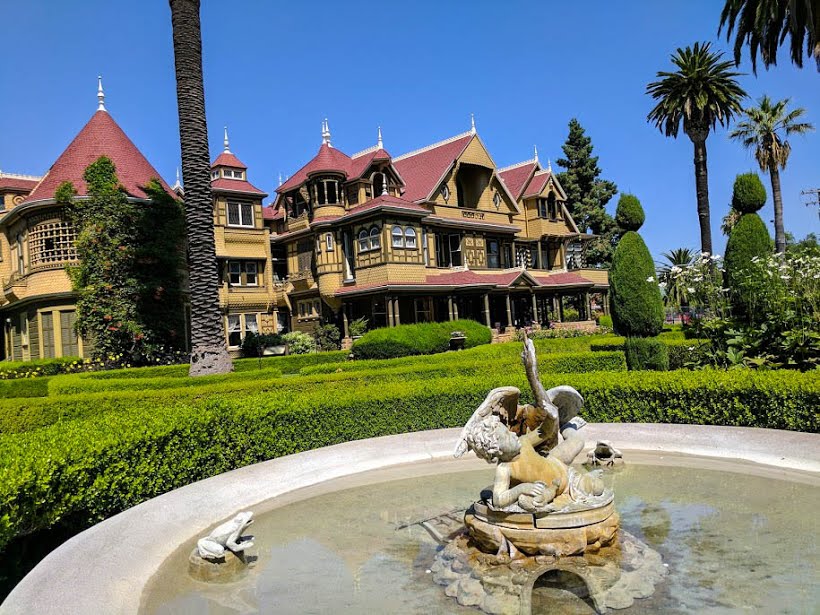 Sarah Winchester bought what is now known as the Winchester House and 161 acres of land. It was just an eight room farmhouse, but from that time on the house grew exponentially to up to 600 different rooms.

The legend surrounding the house and Mrs Winchester is that she was told by a Boston medium that she was haunted by those killed by Winchester rifles and she herself would die unless she continuously built a house around her.

There is no evidence of the meeting ever having occurred, or that Mrs Winchester was an “occultist” or that she communed with the spirits of the dead.

Yet she continued to design her own extensions to the Winchester mansion, that her faithful team of builders and plumbers carried out.
The house is listed in the Guinness Book of Records as the longest continuous house construction ever.

Winchester House has a lot of strange features packed into its many rooms.
Even if Sarah didn’t hold seances or believe in the occult, she had a way of designing that would undoubtedly be seen as kooky, at the very least.

Winchester House & the Doors to Nowhere

Even though she was designing a mansion for the ages, Mrs Winchester didn’t waste time or money on  architects or interior designers. 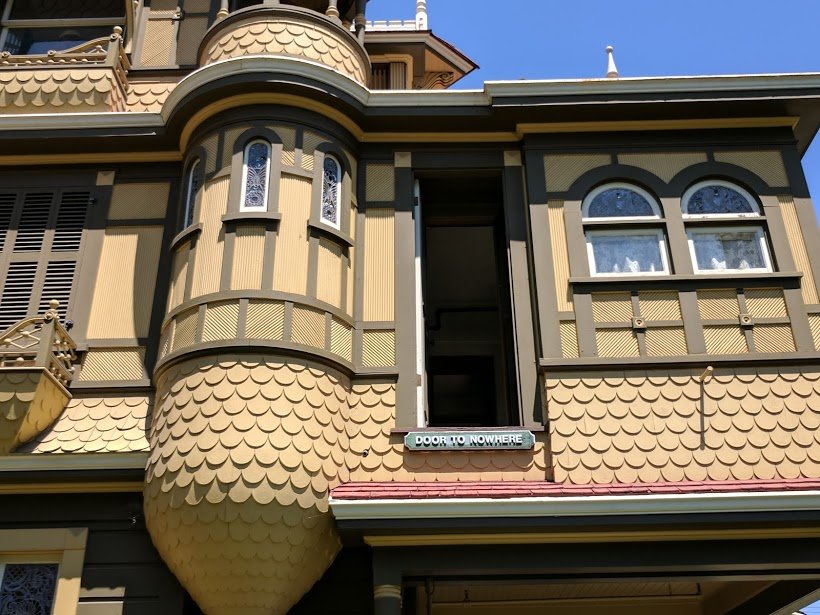 Stepping out of this upper floor Winchester House doorway would give you quite a shock.

Instead she did all of that herself. As you can imagine, she spent a lot of time sketching designs, presenting and explaining them to her builders, who would then have to make her drawings a reality.

Imagine explaining to a builder that you’d like the installation of a few doors on the higher floors that lead nowhere.

I don’t mean that the doors would open to a wall, although those do exist inside Winchester House. Step through one of these doors and you’ll find yourself falling a fair way down into the garden. Or down a shaft to the kitchen.

Why would anyone create something so dangerous and confusing? Unfortunately, Mrs Winchester was not keen on guests, to the point of being reclusive.

And she didn’t leave letters or journals documenting the thought process behind her designs. So no one really knows why much of the house is the way it is.

Stairs to… the Ceiling?

Glance down some of the branching corridors on your way through Winchester House and you’ll come across a strange sight. 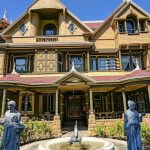 Winchester House’s facade doesn’t do justice to the sheer size of the mansion. 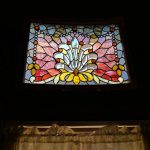 There are thousands of beautiful Tiffany windows in the house. 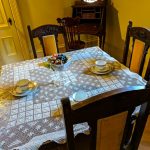 And plenty of places to sit down for a meal. 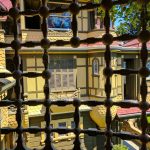 Or enjoy the many views! 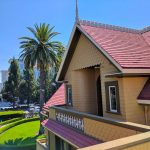 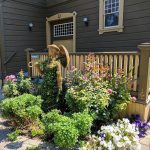 The Victorian gardens have some nice surprises 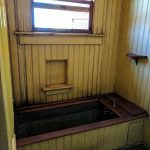 Just one of the bath tubs. There are 13 bathrooms in the house. 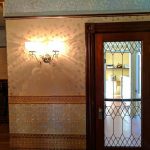 Most of the nooks and crannies were finished with beautiful detail. 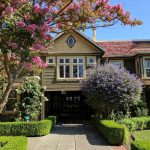 And the Victorian gardens are gorgeous in full bloom.

Staircases, complete with banisters that climb up into the ceiling. On the surface it doesn’t sound all that weird.

Except there are no doors at all at the top of these staircases. No trapdoors, no hidden doors and no way of getting from the staircase up to the next floor. Unless you’re a ghost (in which case you wouldn’t bother using the stairs to start with).

Exploring this labyrinth must have been fun, because no blueprints exist and as the Winchester mansion spread up and out, rooms were tacked on wherever they would fit.

READ MORE:
The Most Beautiful Places in America (for your next trip)
Powered by Inline Related Posts 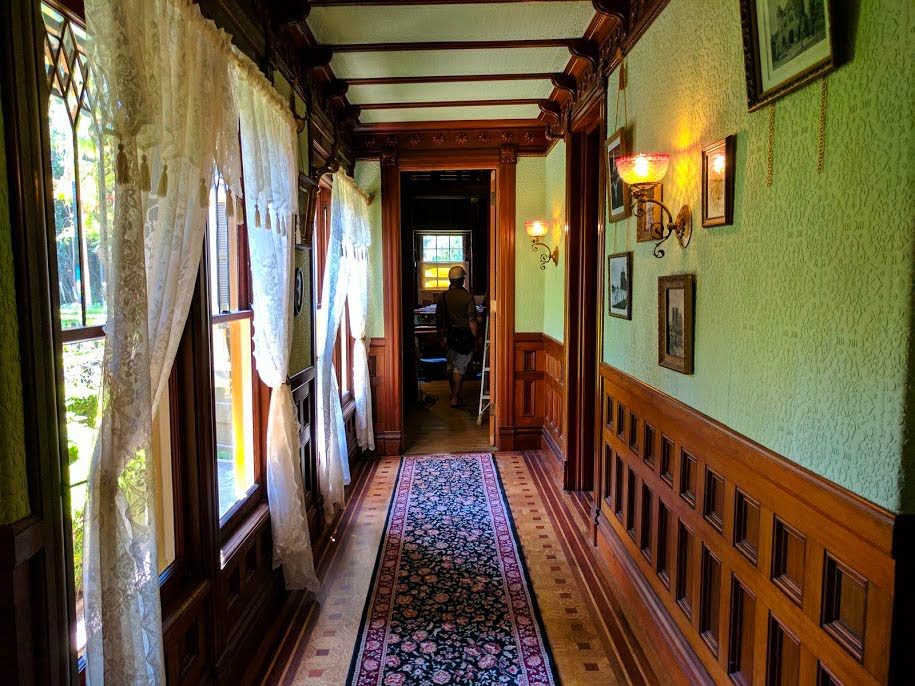 There are no shortage of corridors inside Winchester House.

Speaking of stairs, as Mrs Winchester got older she began to suffer from severe arthritis that limited her movement. The Switchback Staircase was designed to help her get to her bedroom from downstairs without too much discomfort.

Almost everywhere you look inside Winchester House, you’ll come across stained glass windows, whether they’re in window or door frames. 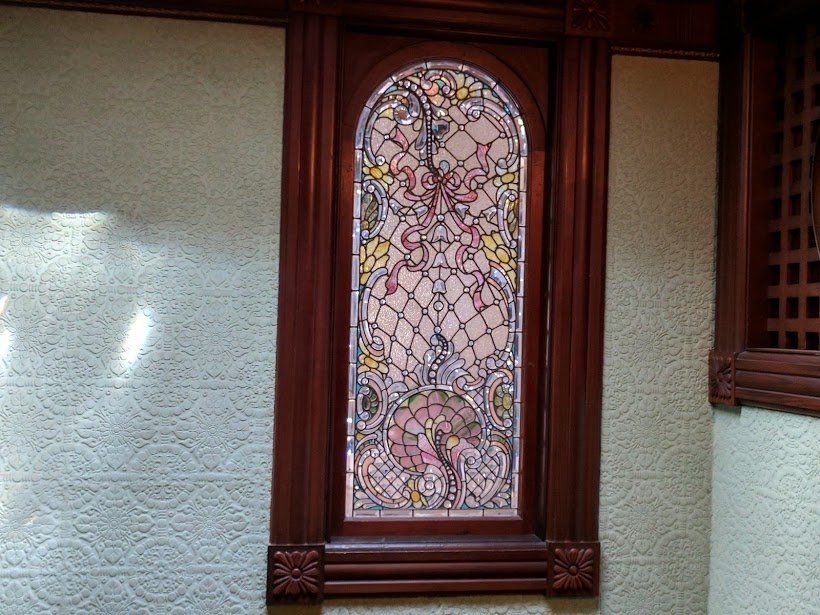 The most famous piece of glass art within the house is also its most expensive. The ornate window is inset with pastel designs and flowers but we’ll never see it in its full glory.

There’s no doubt that the Tiffany Company designers meant for the $1500 stained glass piece to send coloured beams of light dancing across walls and floors as the sun moved.

But Mrs Winchester had different ideas. She placed her most beautiful window in front of a wall on the north side of the house so the sun never touches it.

Many of the house’s windows were designed by the Tiffany Company, not to be confused with the jewelry designers and manufacturers of the same name. 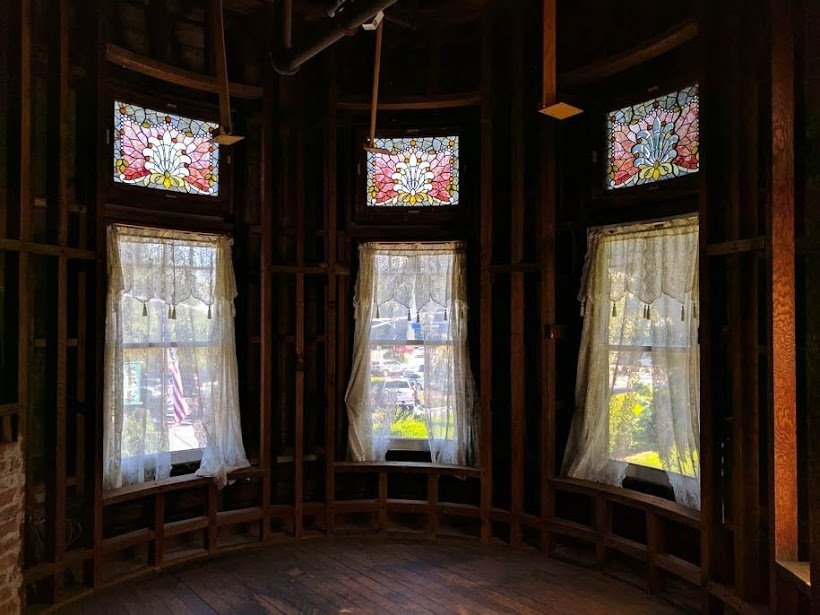 Tiffany glass was made in New York by Louis Tiffany between 1878 and 1933. It was inspired by a trip through Europe and specifically by London’s Victoria and Albert Museum collection of glass.

This is where superstition is said to come into play. It’s said that Mrs Winchester’s favourite number was 13, so much so that she used it in details all over Winchester House. 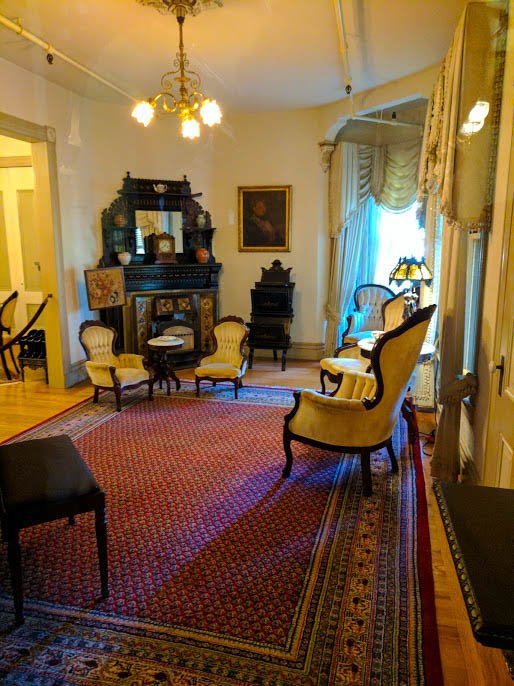 None of the furniture inside Winchester House is original.

Chandeliers were modified to hold 13 lights, there are 13 ceiling panels in many rooms, some rooms hold 13 windows or the stained glass windows hold 13 jewels, 13 stairs in a flight, 13 railings holding up a banister, and the house has 13 bathrooms.

Sarah’s fascination with the number even extended to her will, which was made up of 13 parts, and so was signed 13 times.

Even though the number 13 is widely thought of as being “unlucky” in superstitious circles, in Italy it is just the opposite.

In a house this big, with constant planning and building going on, there are bound to be unfinished bits and pieces. 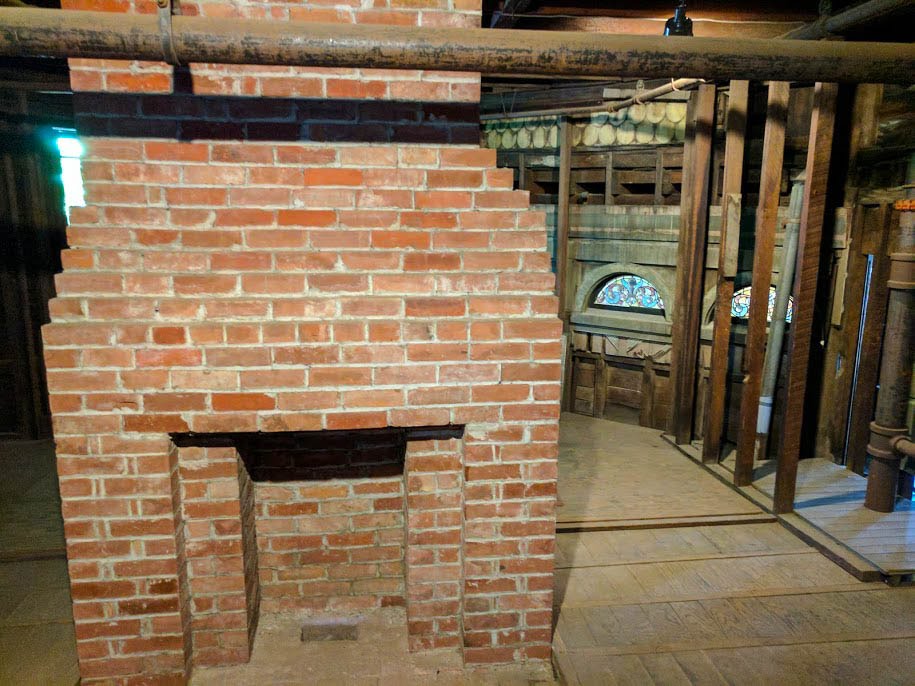 Although there are 40 fireplaces in the house, only 17 have chimneys.

You can take the Mansion tour for a peak at some of the rooms that were still being worked on when Mrs Winchester died in 1922.

They are packed full of bits and pieces that were salvaged after the 1906 San Francisco earthquake that felled parts of the building and pinched a door shut, trapping Mrs Winchester inside a bedroom.

There are balustrades, sconces, windows and banisters, as well as lots of other things that my non-construction trained eyes couldn’t identify easily, or correctly. 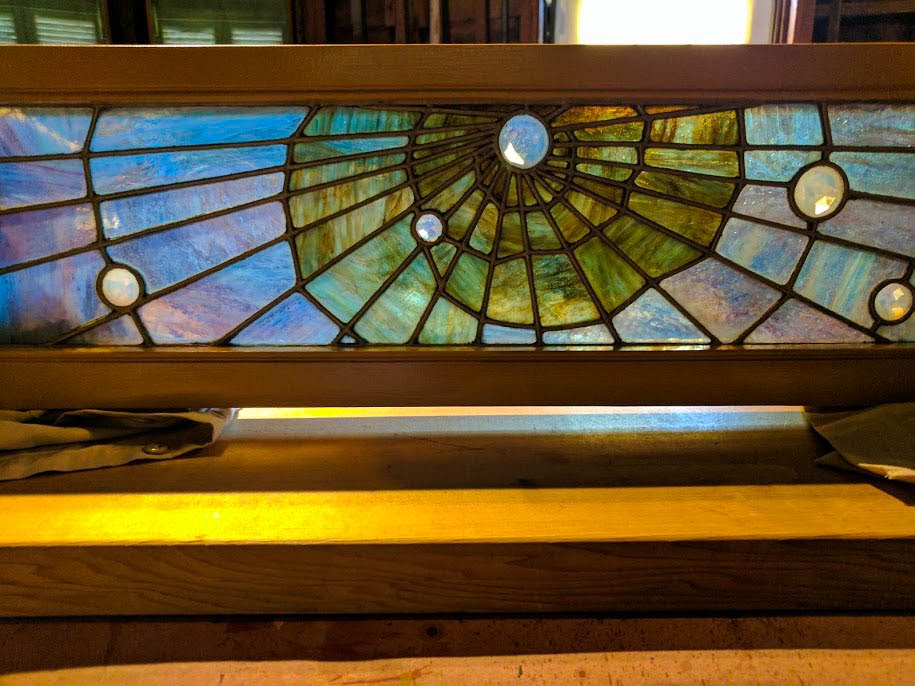 If you look closely at the photo of Winchester House in its earlier days you can even spot the parts of the building that the scraps came from.

Far be it from me to get fancy, but it’s important to point out that the intricate designs that cover the walls of Winchester House are not the result of a roll of wallpaper. 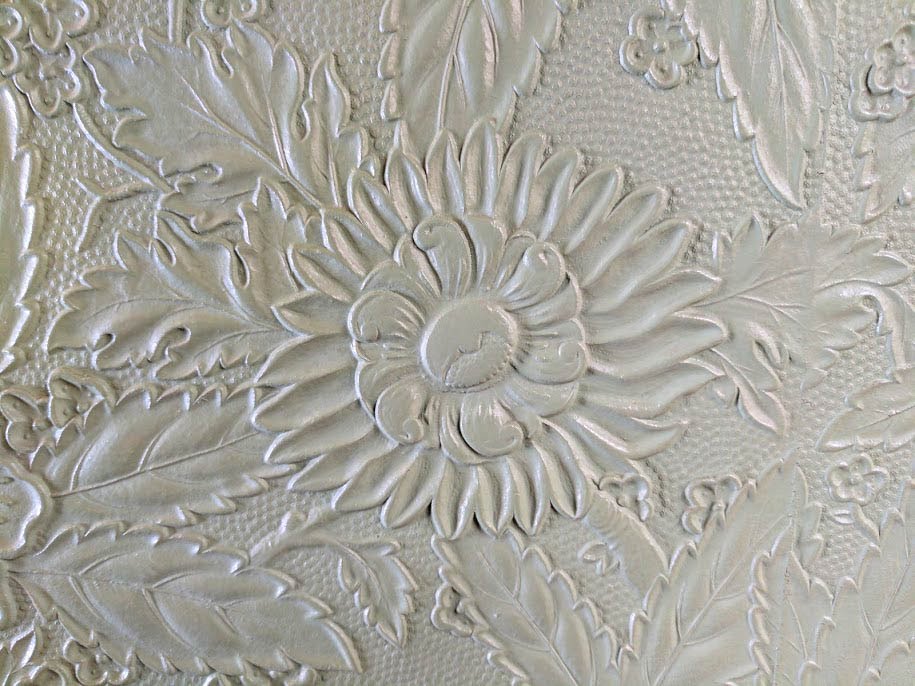 They are actually Lincrusta Walton wall coverings. Invented by Frederick Walton in 1877, who had first developed linoleum floors a decade earlier.

Apart from the beautiful designs offered by these wall coverings, they became popular in Victorian circles because they were washable without causing degeneration. So they were seen as sanitary. 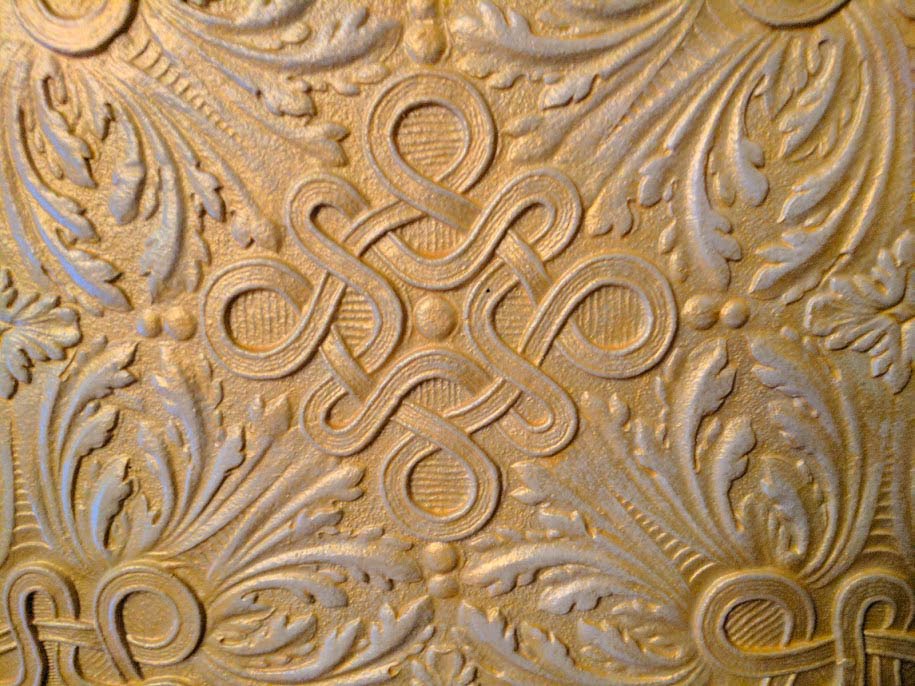 It was so popular that you can even find Lincrusta Walton wall coverings in the White House. You’re probably starting to understand how Mrs Winchester ended up spending that $5.5 million on her home.

While a lot of the focus was placed on the building, it’s easy to forget that Mrs Winchester had six acres of land to play with. 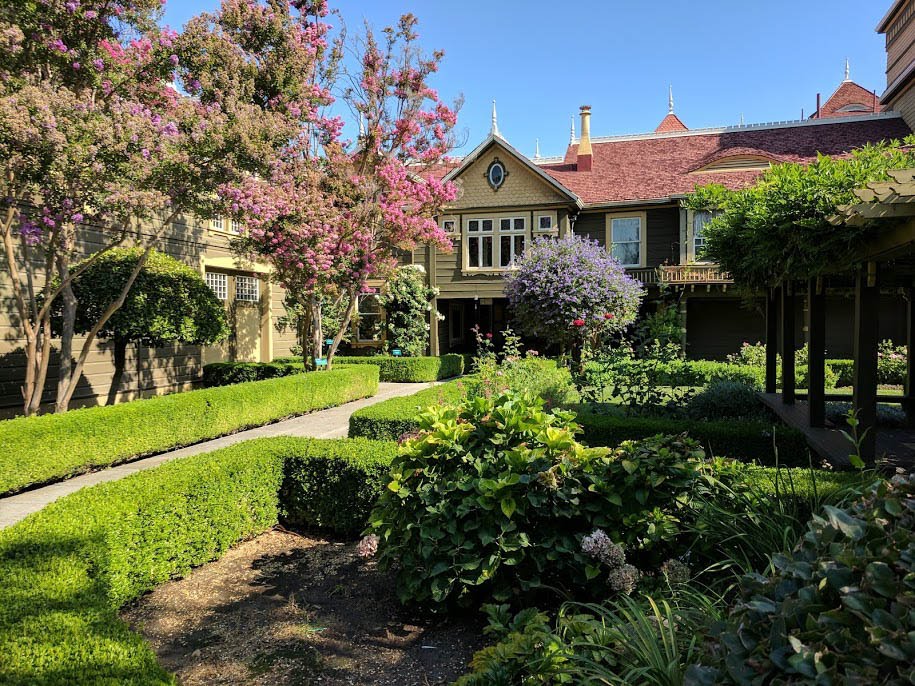 That meant gardens, particularly Victorian ones. So Sarah had her fair share of gardeners to tend to the vast grounds.

When you visit today, you’ll only get to see a portion of what would have been The Winchester Estate, as fair chunk of it was sold off after Mrs Winchester’s death. 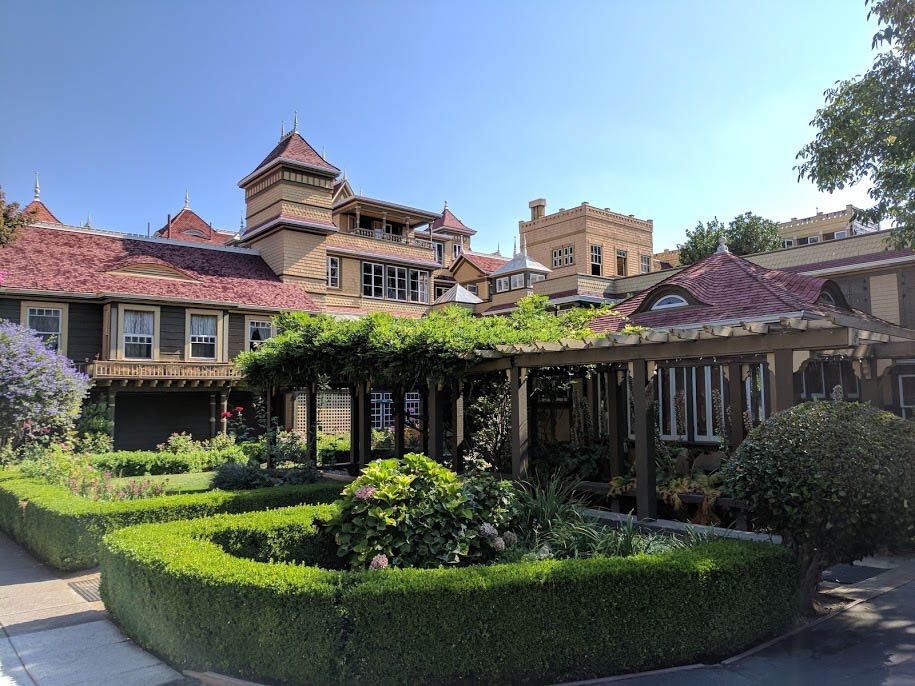 Trellises and hedges make for great places to sit and relax

Don’t be put off by the little parking lot and the small area in front of the house that fits a fountain and some beautiful hedging.

If you’ve got a little time before your tour of the house, head outside and tour the gardens on your own.

It’s thought that $1.5 million was spent on the gardens and surrounding orchards (when they existed) so there had to be buildings to house farming machinery and to store the surplus fruit and vegetables that were harvested.

Winchester House: Everything you need to know

Pin for later or see our web story about Winchester House. 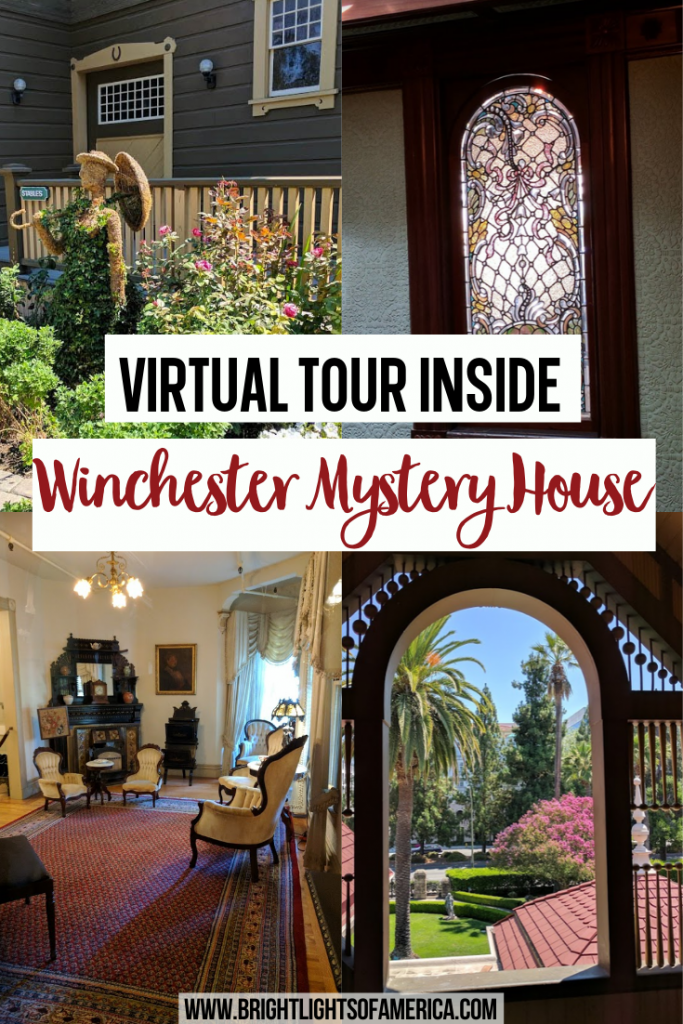