Why you NEED to stay in this Ottawa Hostel 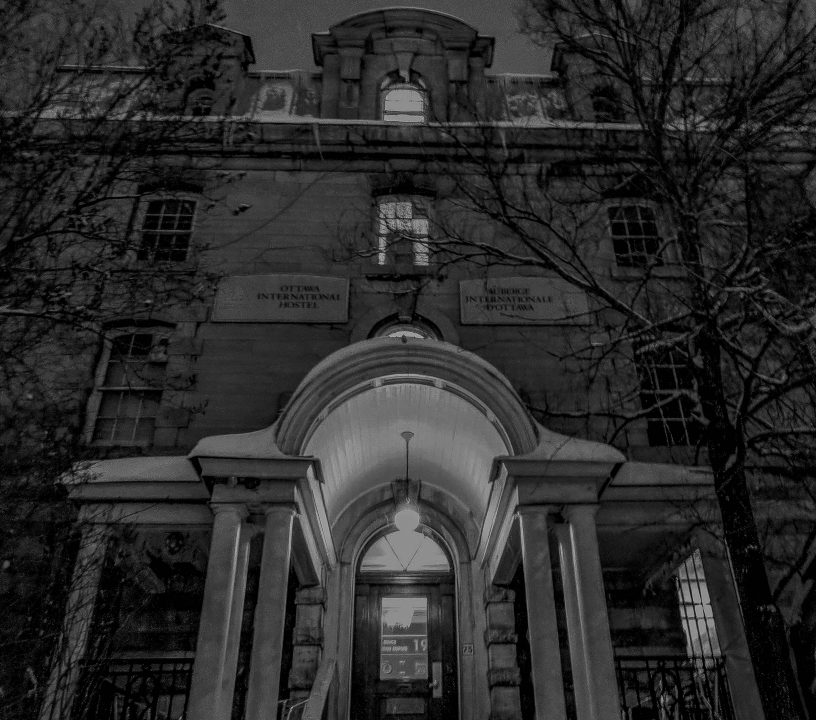 I was so excited to stay at this Ottawa Hostel that I was counting down the days to my flight. It might seem like a strange sentiment and maybe even a strange way to kick off this post, but that’s how I felt.

This Ottawa Hostel ticked all the boxes:

Now that I’ve teased you enough, I had a room booked Hi Ottawa Jail* … actually, make that a cell. The Hi Ottawa Jail is a  150-year-old former jail that housed everyone from death row inmates, to immigrants waiting out a quarantine period, people who couldn’t pay debts and children convicted of crimes.

If I believed in all things ghostly I’d tell you that “some” say it’s haunted. Numerous hangings have taken place inside the building, so I suppose that could be true.

Want to know more about why you need to stay at this Ottawa Hostel? Here we go.

From the outside, it doesn’t look like a jail. In fact, I trudged right past it through ice and snow, dragging my suitcase behind me. 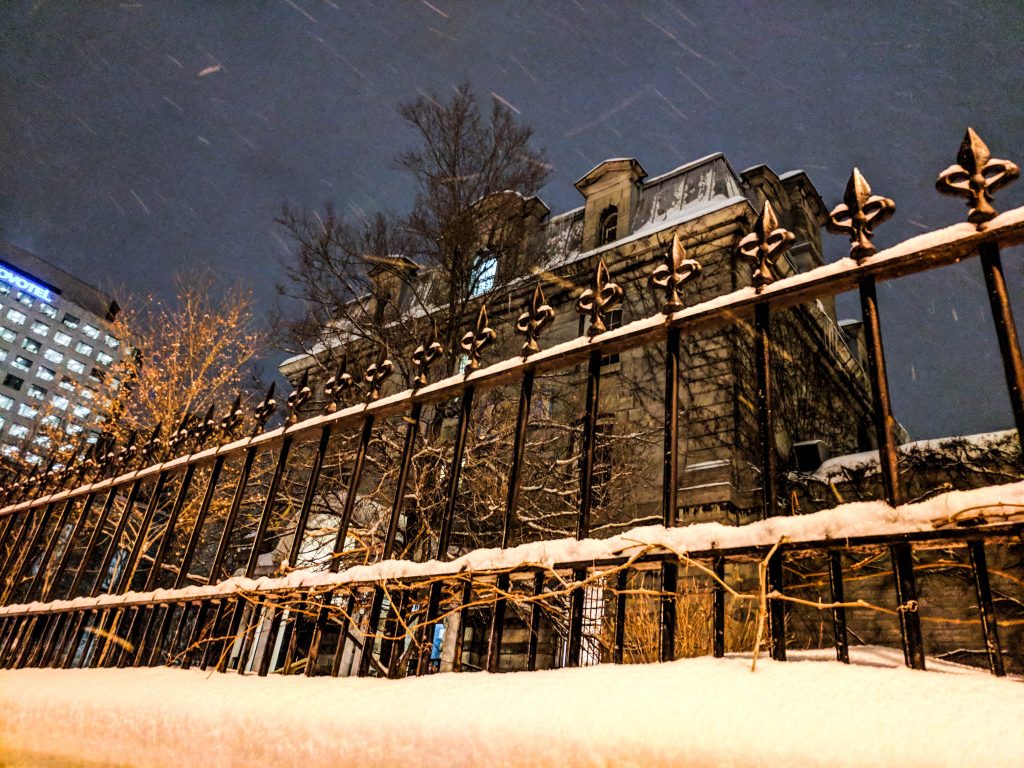 This Ottawa Hostel can be a little spooky in the right light.

Then I realised I’d gone too far, turned around and saw the imposing wrought-iron gates that lead up to the building that looks more like a Victorian-era county hall than a jail.

Hi Ottawa Jail first opened as an Ottawa Hostel in 1973 just a few months after the jail (known as Carleton County Gaol) closed down.

READ MORE:
Where to eat in Ottawa
Powered by Inline Related Posts

Can you believe that Prince Phillip, Duke of Edinburgh opened the place? Me neither, but he did. Anyway, the building underwent major renovations (so don’t worry about the conditions, they’re great) to restore it and was sold to the Hostelling Association by the City of Ottawa for just $10.

Of course there’s more to the $10 story, the city has the option to buy the building back for the same amount at a later date.

Want to know more history? Keep reading, it’s below my review and experience at the hostel.

You can’t be expected to explore a city like Ottawa without a full stomach. Especially in the colder months with you’ll definitely be using extra energy to keep warm. 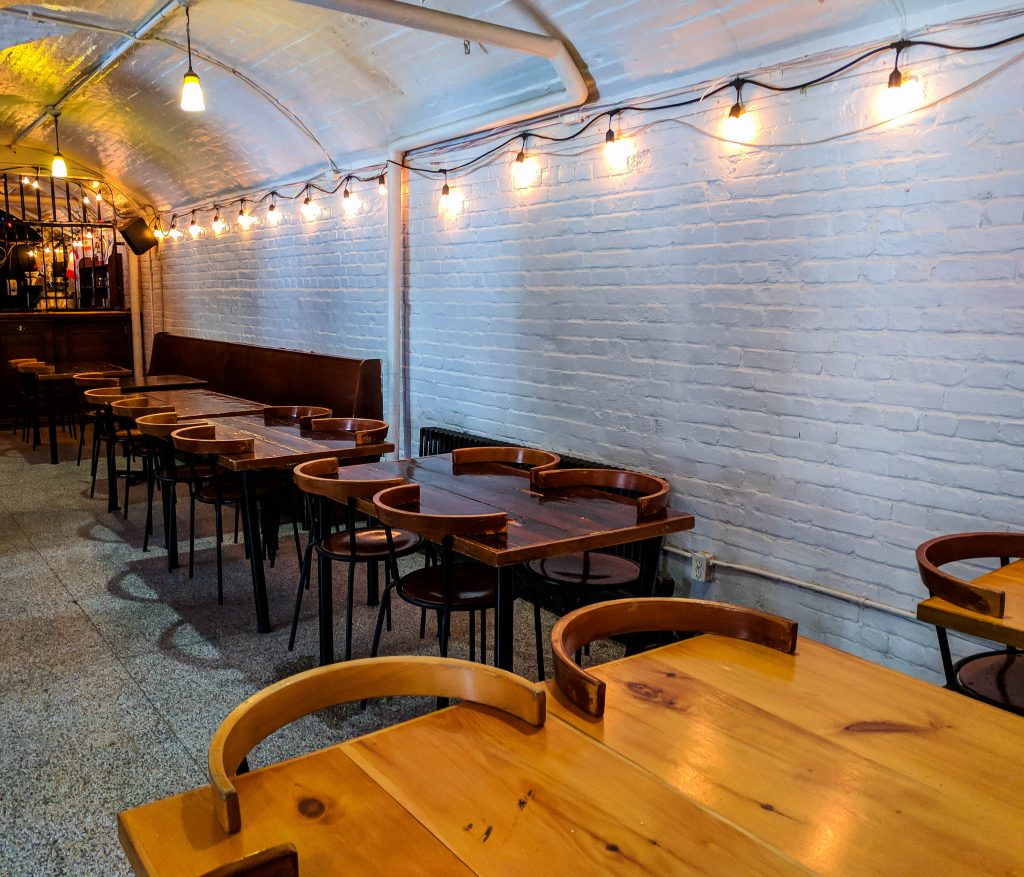 The kitchen, dining and common rooms all adjoin on the ground floor of the building. Breakfast is free and includes cereals, boiled eggs, toast, bagels with jam or cream cheese and fresh fruit like oranges and rockmelon (cantelope).

Like most hostels, you’re welcome to bring your own food, store it in the kitchen fridges and cupboards and cook your meals there too. It’s a great way to meet other travelers, especially if you’re on a solo trip. The kitchen is well equipped for whatever you feel like making, and you’ll be saving previous adventuring money. 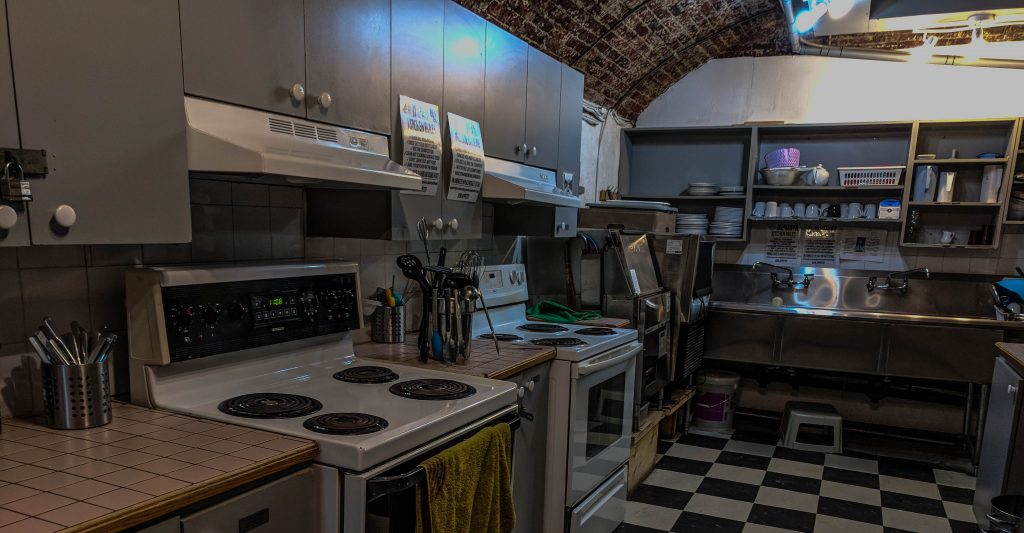 History buffs take note, the 11am daily tour of the jail is pretty cool. You get a bit of history of the place but not so much that it’s overwhelming or boring. 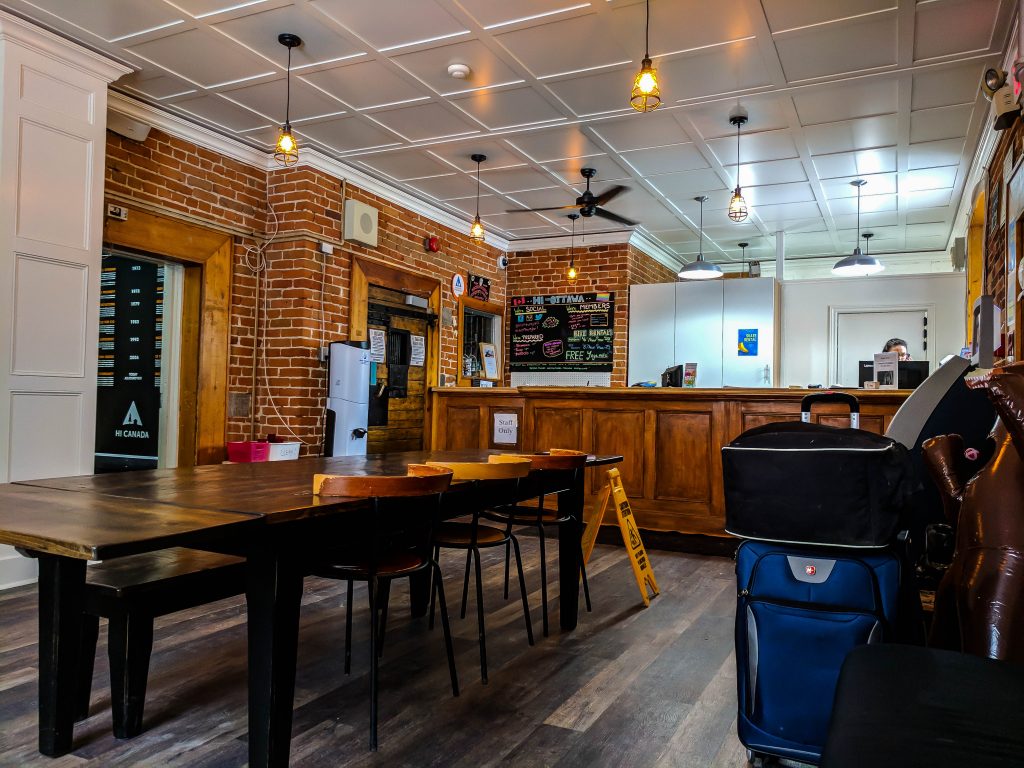 Sign up for and meet in the lobby for the Jail Tour.

And you get to see parts of the hostel that you may not want to venture to on your own. It all kicks off in the lobby and you might want to get there a little early because my Sunday morning tour was packed.

Funnily enough it all begins in the dining area, which used to be the “minimum security” area of the prison. It also housed immigrants for their six month quarantine period, though it turned out to be a death sentence for many of them since hygiene wasn’t great and disease was rife. 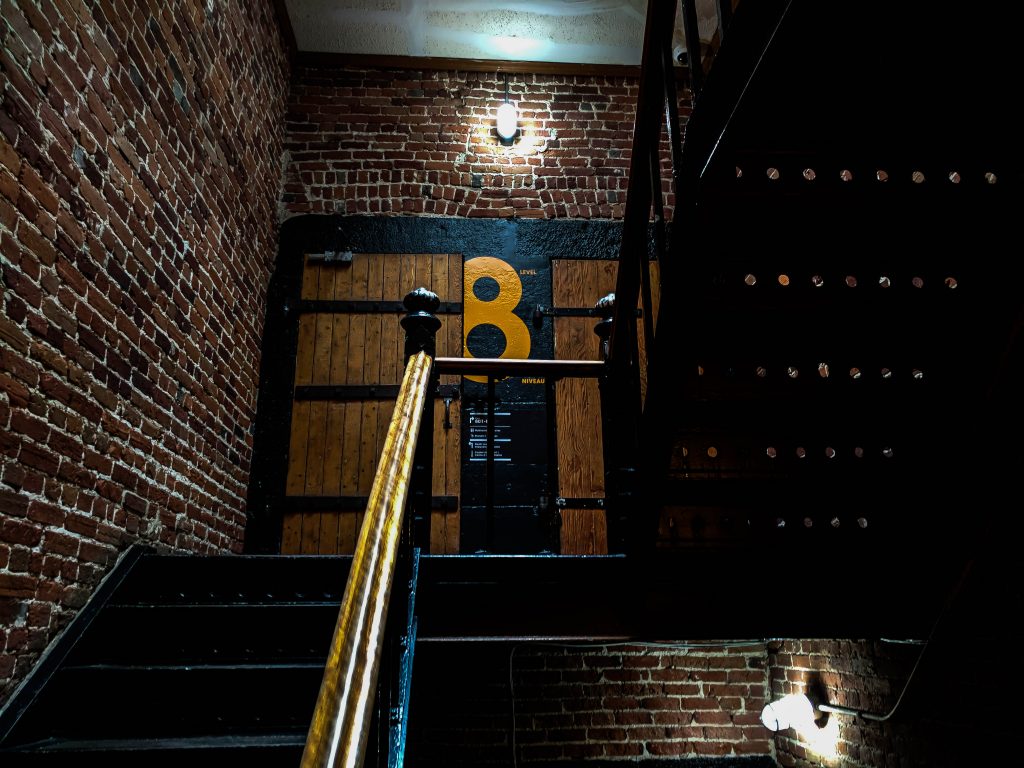 Stairs between floors had holes cut in them so guards could see inmates ascending or descending.

I won’t spoil the tour by revealing everything, but you get to see solitary confinement cells, where prisoners were stripped and shackled spread-eagled to the floor for months on end sometimes. With just 15 minutes “exercise” time.

Not a comfortable way to life, especially since there was no glass in the windows. Imagine the freezing winters. Plus any misdemeanor could land you in solitary.

Children (of which there weren’t many as beatings were a preferred form of punishment) and women were kept on a higher level of the building.

There was a hospital at one time but it was shut down because of the poor hygiene standards in the jail. If you were lucky, you’d get one bath a month. All in the same bathwater.

Death Row and the Hangman’s Noose

Then there’s death row on the upper floor, which is also where hangings took place. Each inmate moved up a cell as they got closer to their execution date, until they were in a cell on their own, between two steel doors. 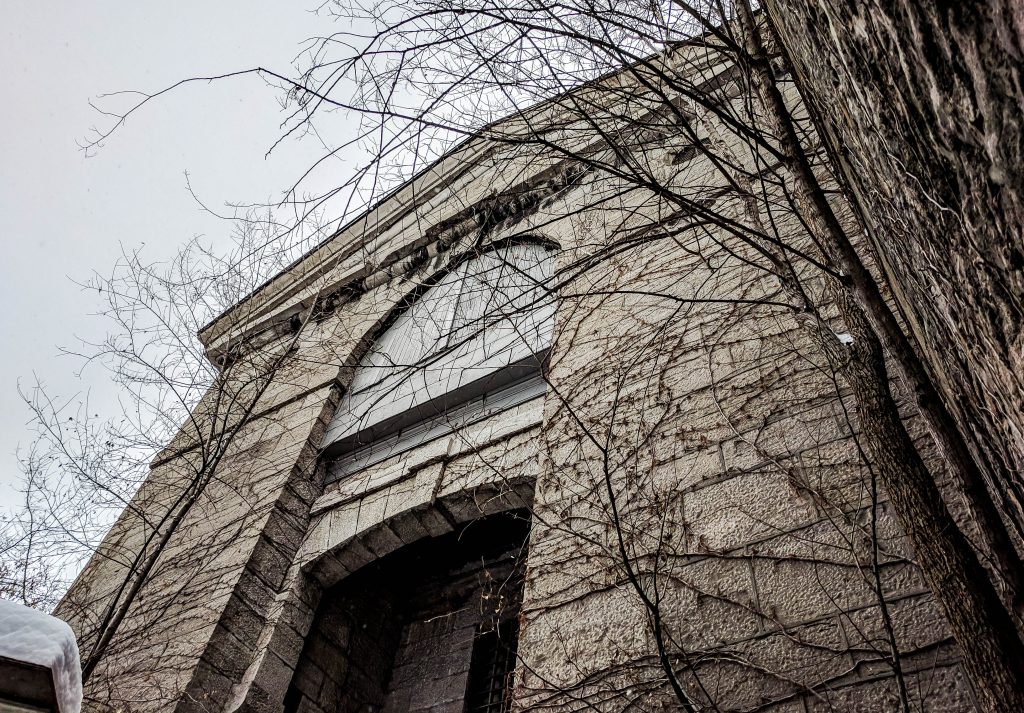 The doors above would be opened for the public to view executions.

From there they were paraded back past the death row cells to an alcove off a stairwell, where a door would open so the public could view the hanging.

Although only three court-sanctioned hanging took place here, it’s thought that guards carried out their own unofficial hangings here as well.

Patrick James Whelan was one of the most famous executed inmates because of the circumstantial evidence he was convicted on.

Whelan was said to have assassinated one of the Fathers of the Canadian Confederation, Thomas D’Arcy McGee in 1868. McGee was opening the door to a boarding house when he was shot in the neck by someone waiting inside.

Whelan’s protested his innocence up to his death, and it is thought that he was just an Irish-Catholic immigrant in the wrong place at the wrong time. Half of the population of Ottawa turned out to watch his hanging after a trail that is widely known to be a farce.

The last hanging at the jail took place in 1946, when bandit and murderer Eugene Larment was executed. You can read more about him here.

Yes you will be staying in jail cells. Some have had walls knocked out to create double rooms and dorms but others are a single jail cell that inmates would have experienced. 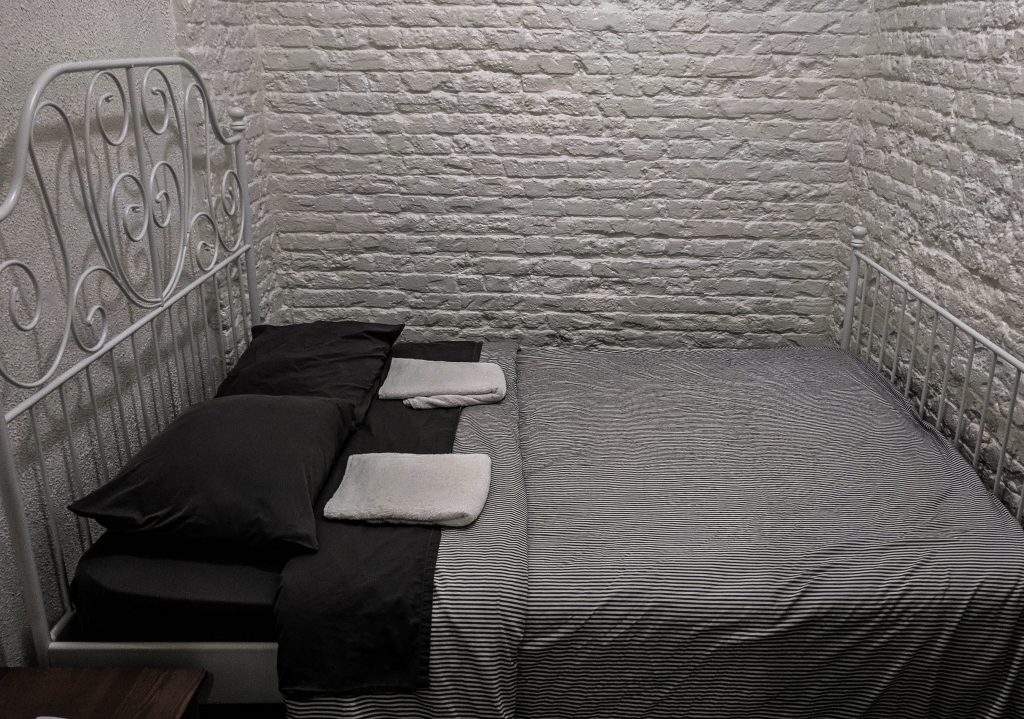 The Hi Ottawa Jail Hostel cell I stayed in was the double cell.

Actually, a cell meant for one would have had three people bunking together. Without bedding for much of the jail’s history, so I guess body warmth was necessary at night.

So, what should you expect from this Ottawa Hostel in terms of rooms? There’s the top tier of jail comfort – the deluxe double room that comes with a en-suite or kitchenette so you don’t have to mix with the great unwashed. It’s spacious nicely decorated. 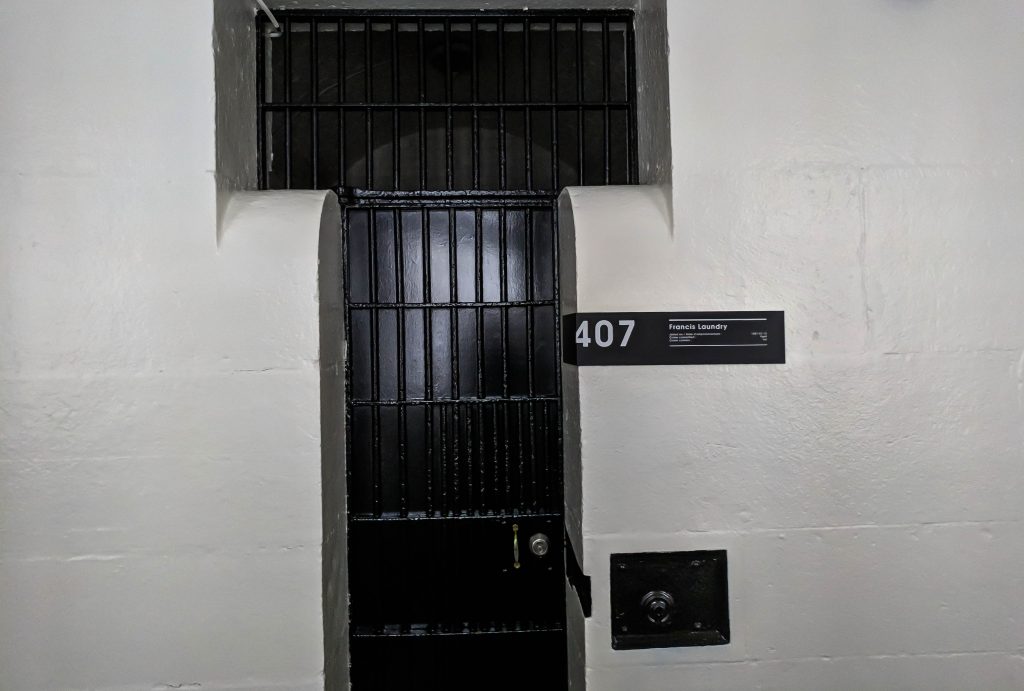 Each cell is labelled with the name of a former inhabitant and their crime.

Or you can go for the Historic Double Cell, which is located in the former solitary confinement area. Don’t worry, there’s glass in the windows now and no shackles.

I stayed in a double jail cell for white collar criminals and it had everything I needed. A comfy double bed, warm bedding, a reading light and bedside table, hooks and a shelf for clothes etc and enough space for my suitcase and boots.

As mentioned above, there are dorms with bunk beds for bigger groups or single cells for solo travelers who want to keep to themselves. Known as the “Authentic Jail Cells” these single cells are just 3×9 with one single bed. A little squeezy but a cool experience.

The showers and bathrooms are clean and warm which is a huge compliment compared to other hostels I’ve stayed in. 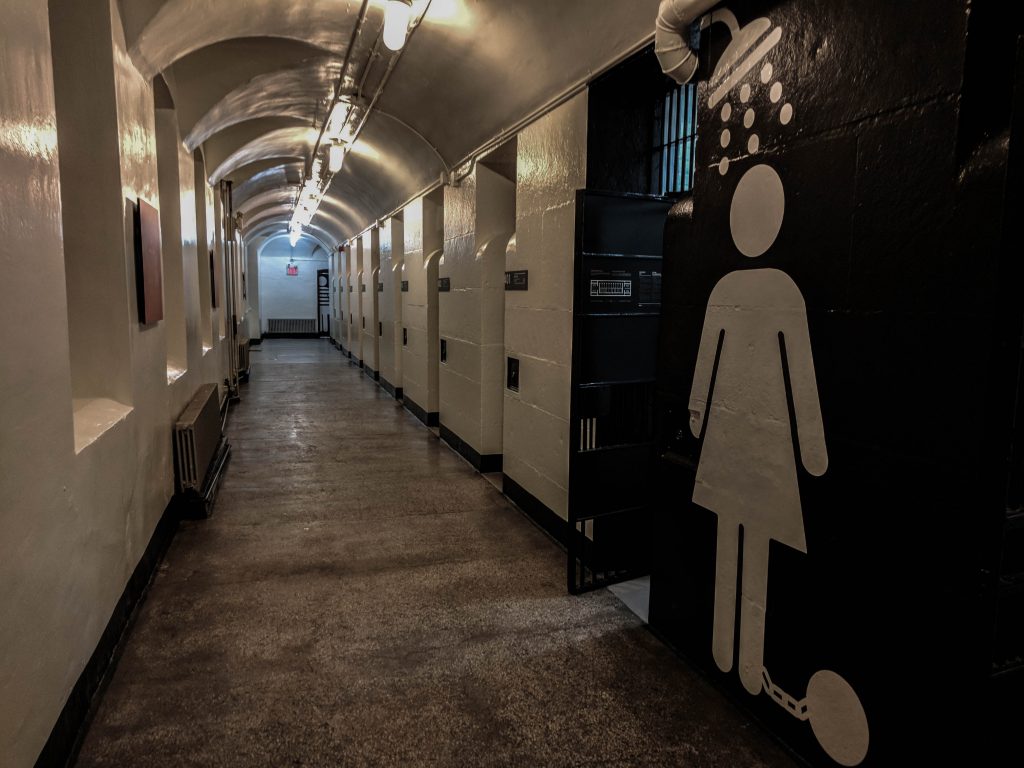 On my floor the toilets were on one end of the hall, while the showers were on the other end. There are hooks for your clothes and towels in the shower stalls and separate bathrooms for males and females. 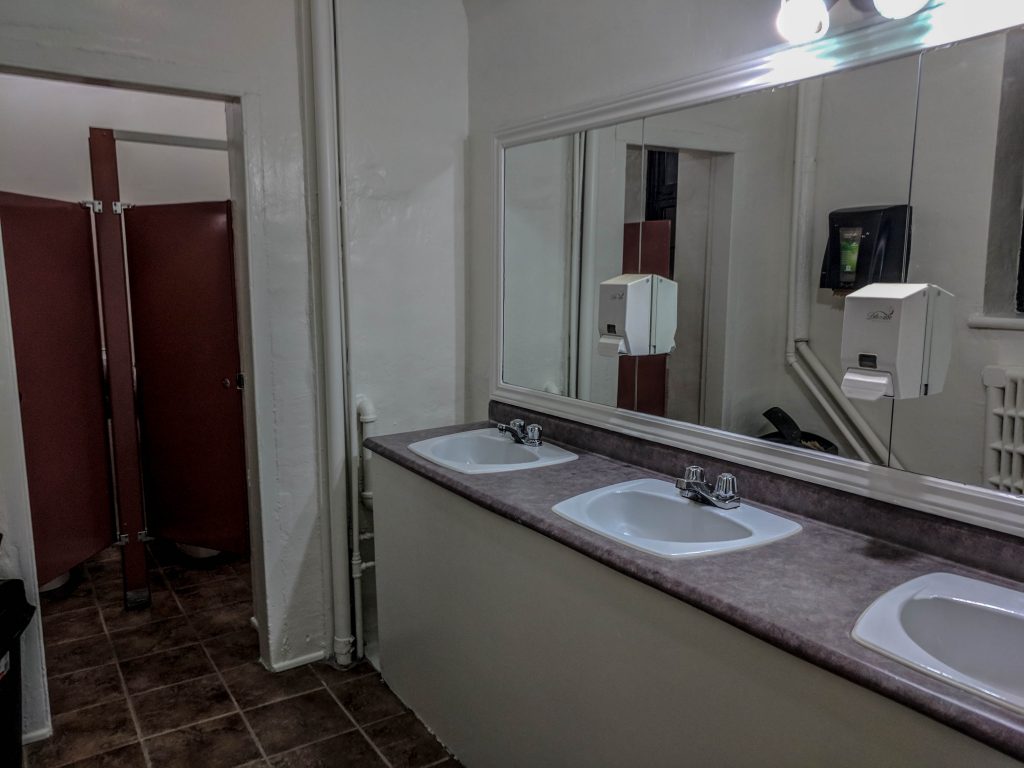 Downstairs you’ll find a little common area where you can hang out and watch TV or talk to other travelers. I visited during the 2018 Winter Olympics so there were always people down there watching events.

There’s also an impressive collection of VHS videos (blast from the past!) and board games.

Group Activities & Things to do

Solo travelers don’t need to worry about feeling left out, especially when there are groups staying at the hostel, there are heaps of activities to take part in.

The Ottawa hostel runs pub crawls on Friday nights (weather permitting) – a staple of hostel life, let’s be honest. The pub crawl will take in a live music venue and a bar for the all-important drinking games. And you can be quarantined in your cell if you get too rowdy.  Or if you’re still upright, go on to a club for some dancing.

The pub crawl locations are chosen with safety in mind, but they’re also places that will be easy on the hip pocket.

If you visit in winter like I did, join the hostel’s tour of the Winterlude festivities. Winterlude is lots of fun and there are some great attractions to see and skating to partake in. You can hire skates from the hostel as well.

Sundays is pub trivia night over at the Kat & Kraken pub. Now can you see why I was so excited to stay here? It’s basically got everything I’m interested in! I will pub trivia to the end!

Things you should know

Staying in a jail brings with it a few unique experiences and issues that you wouldn’t normally face in a hostel or hotel.

Getting there from the Airport: Take the 97 Airbus from Ottawa International Airport and stop at Laurier 2A (the next stop is written above the driver). Then it’s less than a 5 minute walk to the hostel.

*Disclosure: While all opinions in this post (and all others) are honest and my own, it was sponsored by Hi Ottawa Jail Hostel.