A Relaxed guide to Napa winetasting 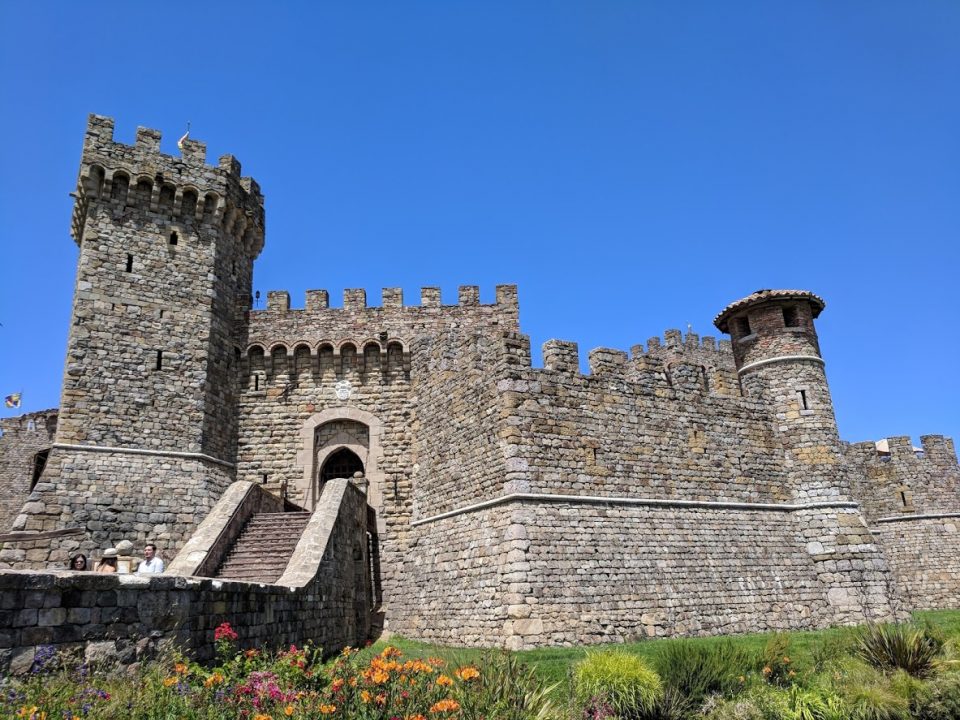 There’s no disputing that Napa and Sonoma are home to a veritable glut of wineries. There are many places to choose from that you can make the mistake of trying to pack in as many as you can into a day.

But that’s not the point of wine, is it? It’s about kicking back with some friends, enjoying good conversation and the sunshine.

So I’ve put together the relaxed guide to Napa winetasting for you. It’s features a couple of wineries that you won’t quickly forget, and a great spot for brunch or lunch.

It took me just under three years of living in San Francisco to visit Napa. I know, it’s almost blasphemous, but every time I tried to book, it was a public holiday that would be super-busy and Mr M and I don’t do crowds well.

So when my Australian cousin and her friends came to visit, I knew it was my chance for a proper day out in wine country.

My navigational abilities (or lack thereof) got us off to a rocky start – we may have circled the same city block a couple of times.

And I was the designated driver, which meant tiny sips of wine and not drinking everything that was put in front of me. But it was still an awesome day.

Things to know before heading to Napa

Before you jump in the car and race off to some wineries, there are a few things that you need to know:

We started our day at a castle, since I figured it was more likely to get busier as the day went on. Despite its medieval look, Castello di Amorosa took 15 years to build and was completed in 2007.

It’s based on a 13th Century Tuscan architecture and the owner made sure that it was authentic down to some of the construction methods used to build it. It’s got five towers with battlements, so you can already tell that this isn’t just some measly structure.

It’s got 107 rooms, 95 of which are used in the winemaking process and the doors were hand-hewn in Italy. I get the feeling that this place is the true meaning of “no expense spared”. 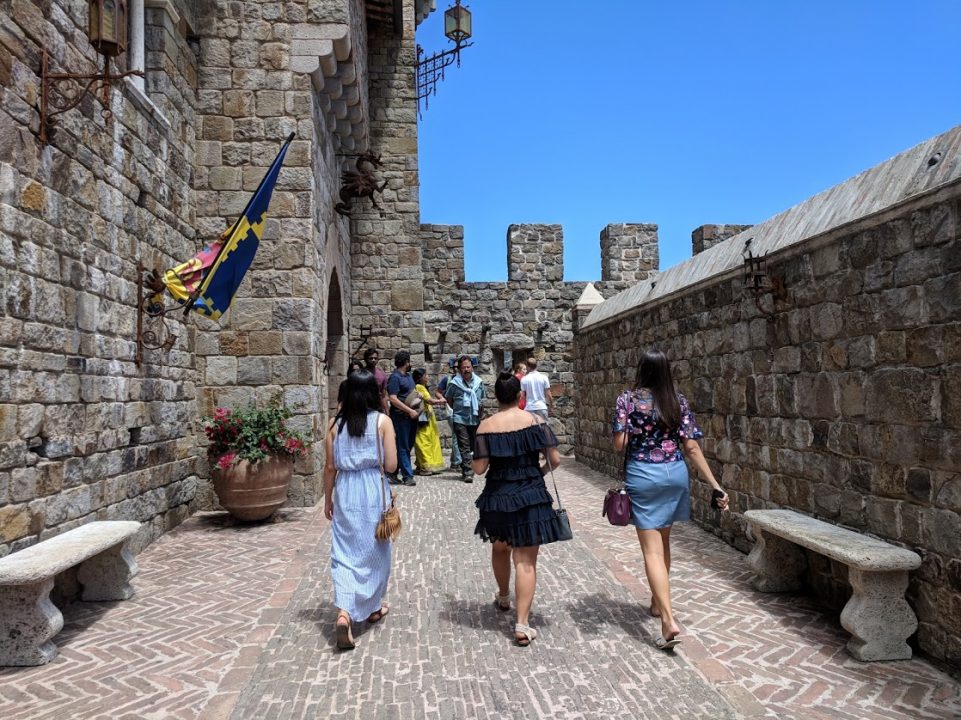 Head up to the battlements and you’ll see vineyards and mountain ranges laid out beneath you like it’s been painted.

Unfortunately, due to a traffic jam and my aforementioned navigational issues, we arrived at Castello di Amorosa almost an hour late for our tour.

So we didn’t get to visit all the rooms and learn about them – and there are a bunch from the church, to the watch tower, torture chamber, loggia and secret passageways. Instead we made a beeline for the tasting room, which turned out to be a fantastic idea. 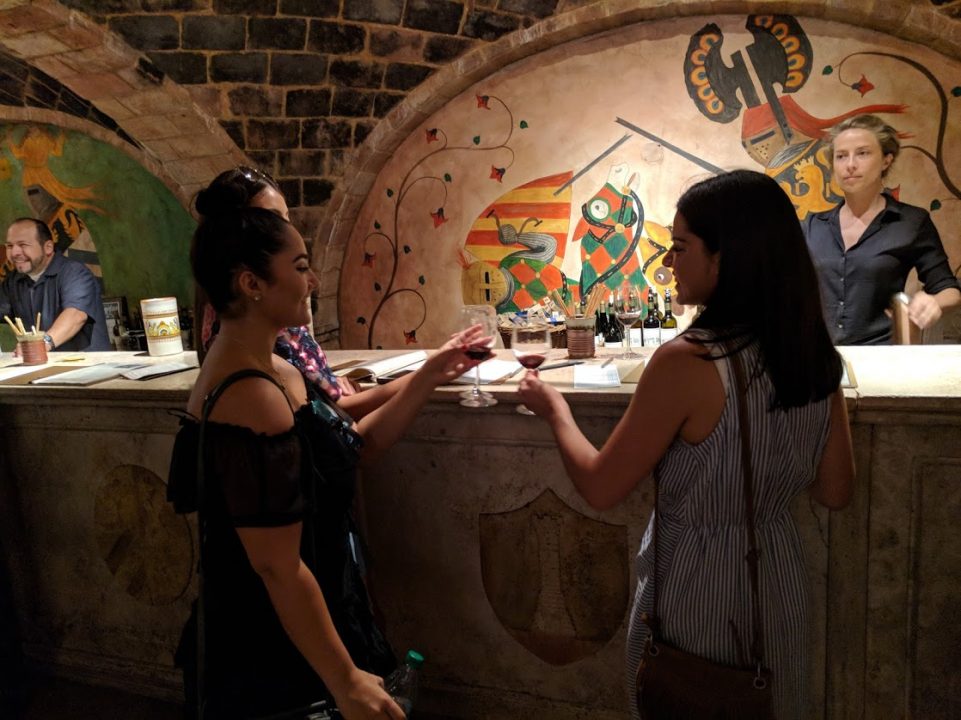 Castello di Amorosa makes a wide variety of wines, including Pinot Grigio, Pinot Bianco, Gewurztraminer, Chardonnay, Pinot Noir, Sangiovese, and Cabernat Sauvignon. That’s not even half of the types that are on offer though.

I’m not a wine connoisseur. I can’t stand around swirling it round my glass, sniffing for hints of ochre or charcoal, or whatever else. I know that I liked all of the wines we tasted and that the more expensive they got, the more I liked them.

Kudos to our French sommelier, who explained everything to us and wasn’t pushy at all. The best thing about wine tasting here (as opposed to Australia) is that you’ve paid for your tasting so you get a pretty good amount of wine in your glass, as opposed to the couple of drops I’m used to at home. 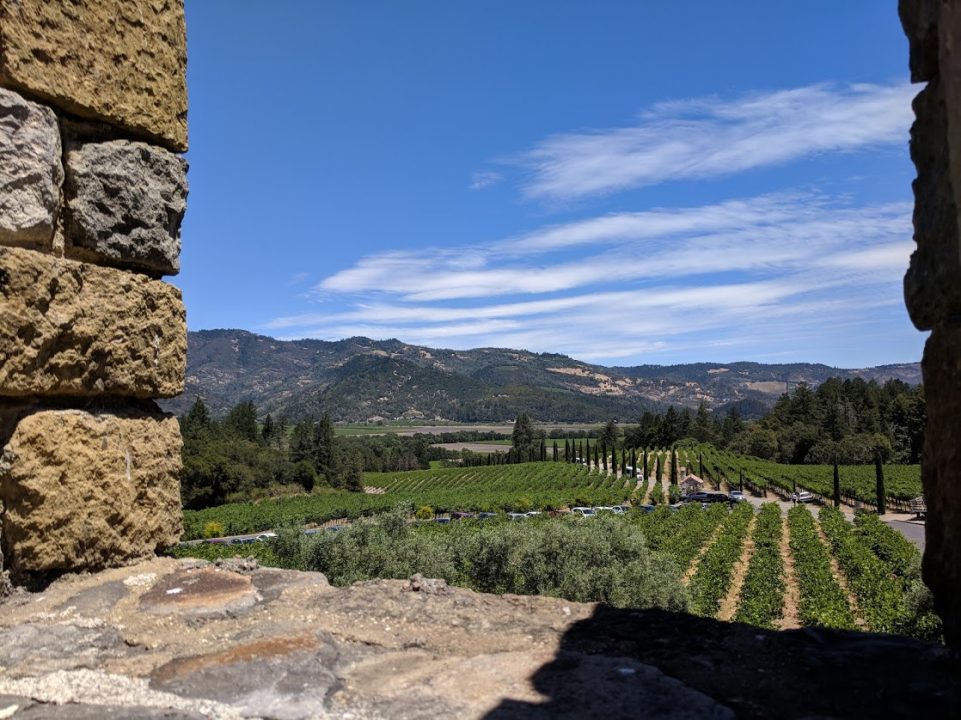 We spent a little time roaming around the castle, checking out the nooks and crannies. Apparently this place is a bit of a drawcard, it’s been visited by Arnold Schwarzenegger, Rudy Giuliani, Jon Bon Jovi (now that’s a claim to fame), Sir James Galway and Robert Redford, to name a few.

It’s a great place to visit if you have to drag your kids along with you. There’s a drawbridge and a little section with farm animals as well. 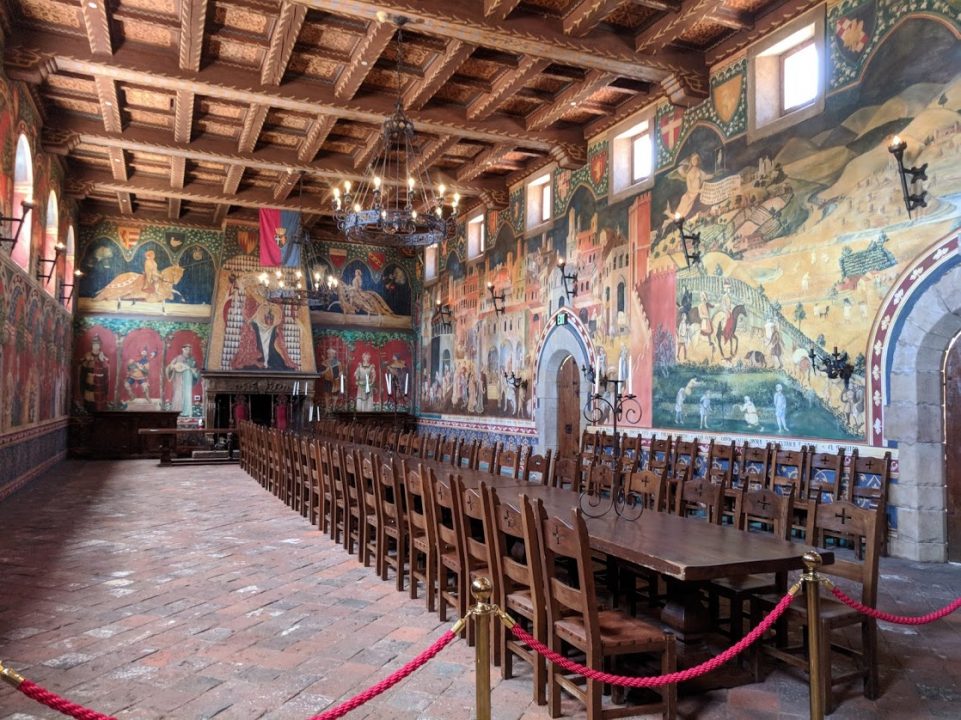 If you have the time, don’t miss the chance to go for a stroll through downtown Napa. It feels like a slice of Europe was plonked in the middle of Northern California.

Downtown Napa has a high street that reminds me of Wimbledon’s – full of boutique shops and pubs with names like the Dog and Fox or the Rose and Crown (both actual pubs I walked past to get to Wimbledon Common many times).

This is the place to splurge a little if you’re so inclined. Have dinner at one of the Michelin starred restaurants, like Iron Chef Masaharu Morimoto’s celebrated eatery, Morimoto.

If you’re not quite hungry yet, a stroll through Oxbow Public Market will set your tummy rumbling. It’s a gourmet food market in every sense, featuring charcuterie, organic produce, bread and olive oil.

But if you’re here for some window (or actual) shopping, there are plenty of boutiques to drop in on and practice your posh accent.

It was getting a little late in the day for us intrepid travelers, and we definitely needed some sustenance to prepare us for our second winery of the day.

We chose a refurbished roadhouse called the Boon Fly Café on a whim, and it turned out to be a great decision. By the time we arrived it was later in the day – around 3pm – but the lunch rush was still in full swing on a Saturday afternoon.

It’s a modern dining room, painted white and furnished with wooden tables and chairs that make the place feel crisp and comfortable at the same time. Plus we nabbed the last seats at the bar, which gave us a great view of the mixologists at work, putting together drinks out of some things that probably shouldn’t be in a tipple – like bacon for instance. It was an education to say the least. 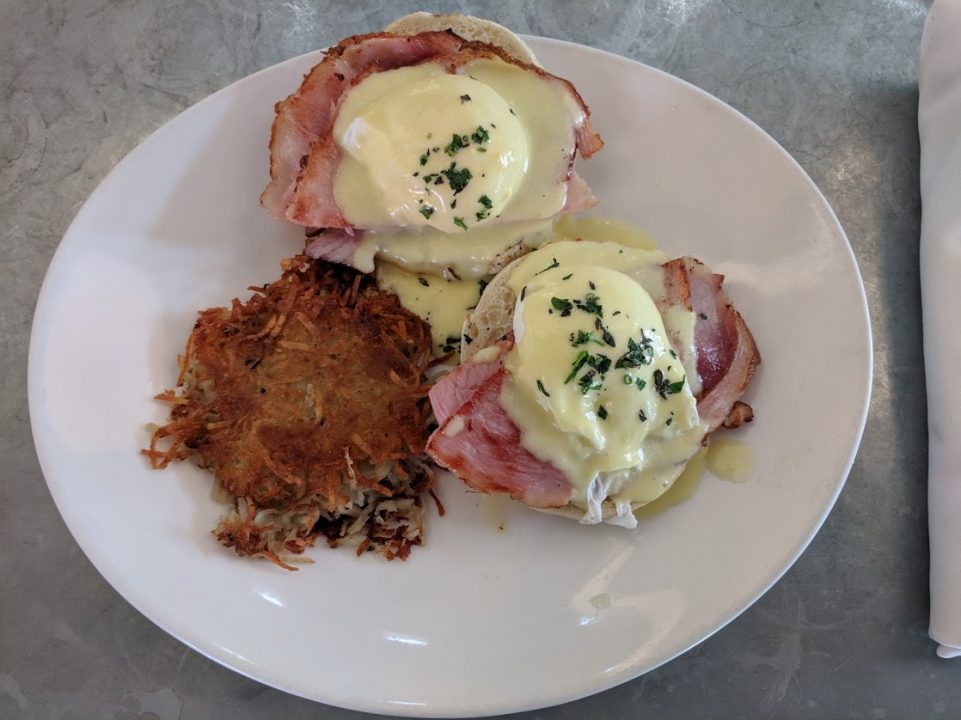 I’d like to say that ordering the Boon Fly Benedict was a case of my eyes being too big for my stomach.

Unfortunately, my stomach is well-versed in eating huge portions (now more than ever) and I absolutely demolished it in no time flat. Which was a good thing since we were slightly late for our next winery. I’d tell you what else was eaten, but I was too busy eating my lunch to notice.

While we were touring grand wineries, we couldn’t miss out on Domaine Carneros in Napa. This is the place where you can really do things at your own pace, and I recommend whiling a few afternoon hours away here.

Depending on the time of year, you can sit out in the courtyard overlooking the vineyards and bask in some sun, or sit inside the elaborate tasting room with a few friends. 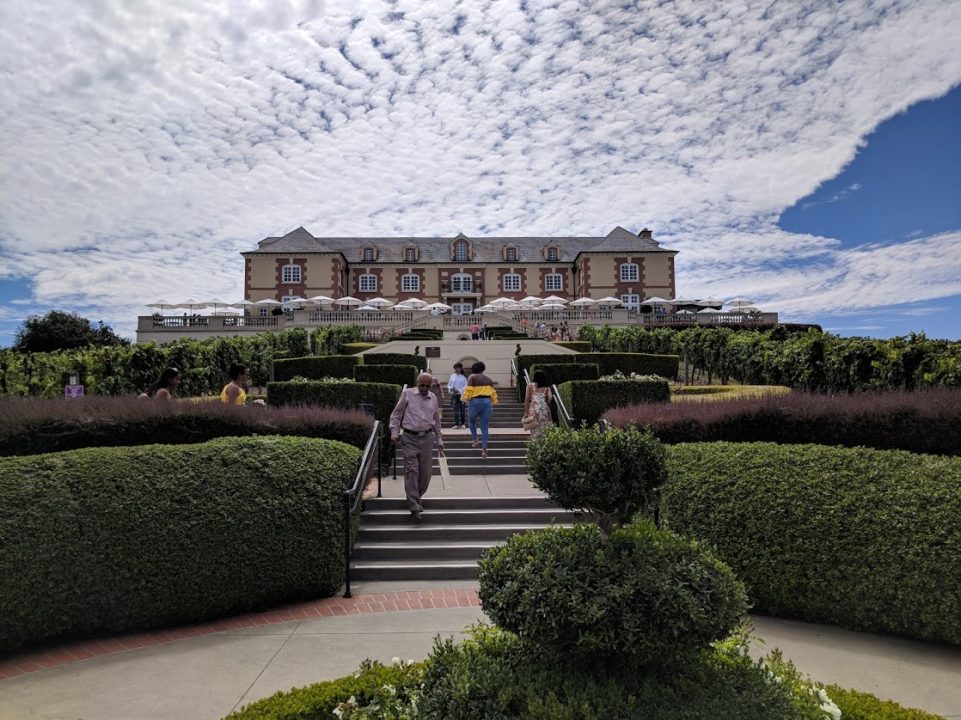 Domaine Carneros is all about the sparkling wine, but that doesn’t mean that it doesn’t cater to those who are less inclined towards the sweeter things in life. Let’s start with the building and grounds though.

In keeping with our theme of buildings that echo famous architectural styles of the ages, this Chateau is inspired by the Chateau de la Marquetterie in Champagne, France and was completed back in 1989.

It’s as imposing as you’d expect a French chateau to be, sitting atop a knoll, surrounded by formal gardens and outdoor terraces, filled with marble and gold accents. 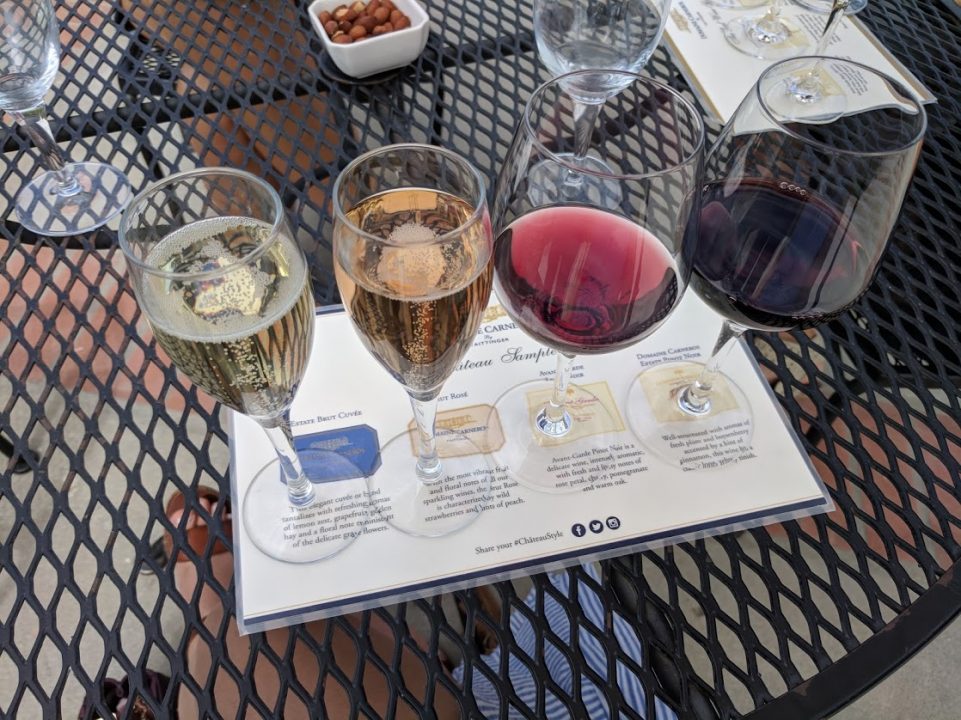 While there is a tour available at Domaine Carneros, we retired to the terrace and got straight to business. There are four sampler menus available here that caters to different tastes – Sparkling wine, red wine, Chateau and Grande.

If you don’t fancy getting a flyte (which is what I’m calling it from now on), you can also order wine by the glass, which is especially useful if you already have your favorites picked out. 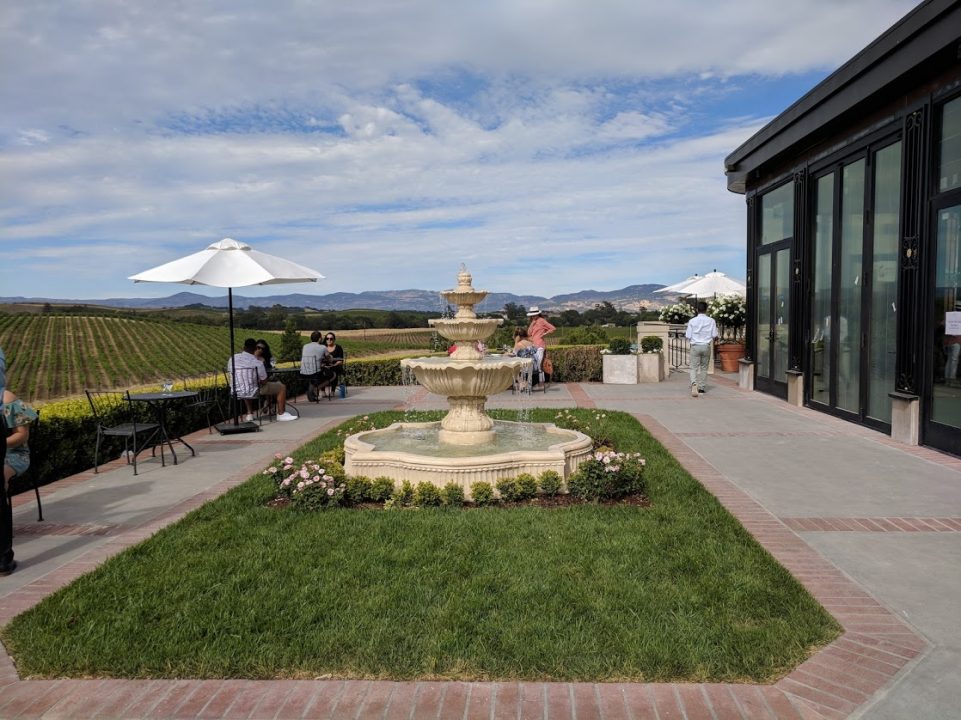 We visited on a beautiful summer’s afternoon so it was nice and sunny with a little breeze to go with it. The perfect spot, and we managed to stay for a few hours without even noticing the time go by.

Our sommelier, whose name I regretfully forget but it could have been Matt or Ryan, was knowledgeable, friendly and funny. Which is all I could ever ask for in someone serving me wine. I inadvertently threw shade on American men (sorry Mr M, I didn’t mean it) and he didn’t let me forget it. As he shouldn’t have. 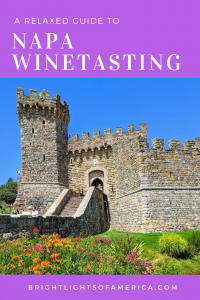 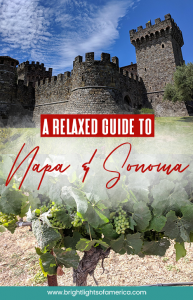