Top 10 cheap things to do in Las Vegas 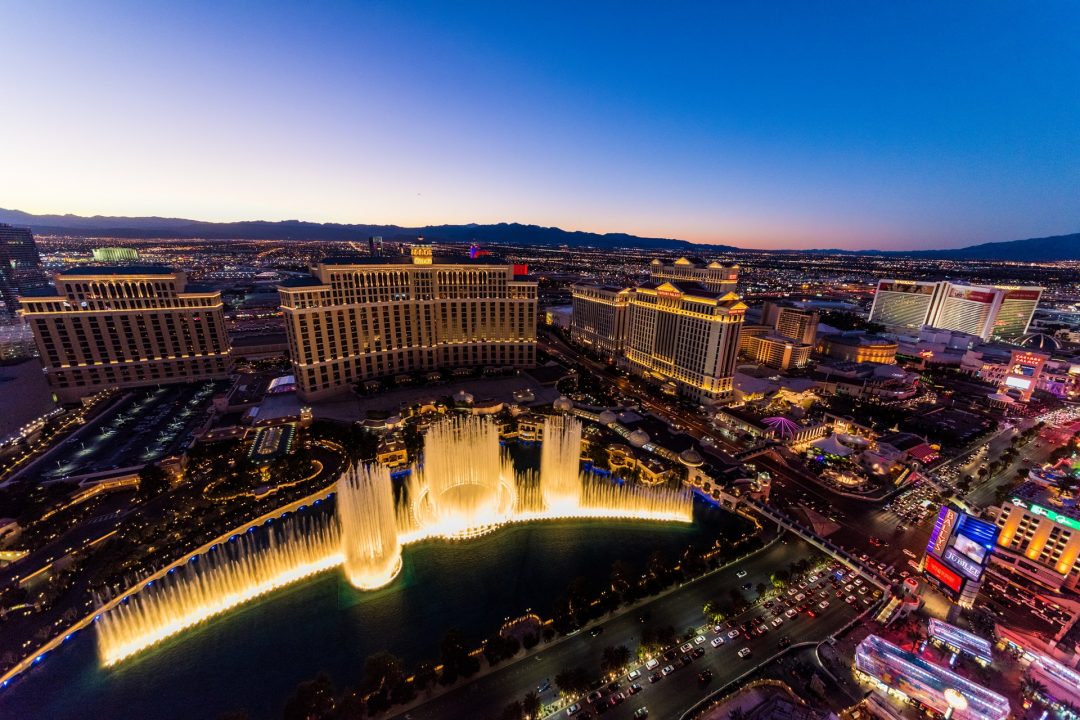 185shares
Las Vegas, where money just begs to be frittered away needlessly. Can you tell that I’m not a gambler? I worked hard to earn that money and I’m not just going to hand it to some casino like it means nothing. That’s why I’m giving you a list of 10 cheap things to do in Las Vegas. Sure, it’s a city built on frivolity, glitz and a healthy amount of glitter. But that doesn’t mean you have to get too caught up in it all. There are still heaps of great things to do that won’t break the bank, and you’ll still have an awesome time.

TOP 10 CHEAP THINGS TO DO IN LAS VEGAS

This list is not at all exhaustive. I visited Vegas for work and so I had limited time to get out and explore everything. But let’s face it, Vegas comes alive at night, so I probably didn’t miss too much to be honest. I’d love to hear your cheap-as-chips tips for Las Vegas as well though, so be sure to leave them in the comments section below. 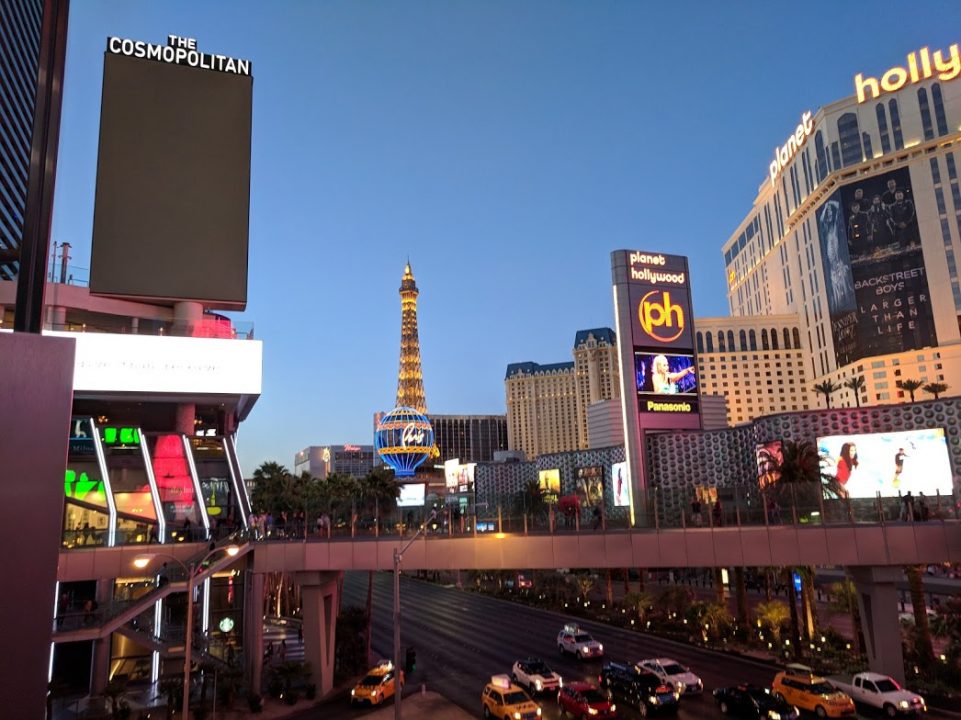 You can go from Paris to Egypt in a few minutes shuttle ride in Las Vegas.

The whole reason most people hop on a plane or direct their cars towards Las Vegas is for The Strip.

Who doesn’t want to be bathed in neon and witness decadence on every level? OK, I’m not describing it very well.

I spent five hours one night, walking from one end of the strip to the other, stopping to take in the sights and decadence of the buildings. 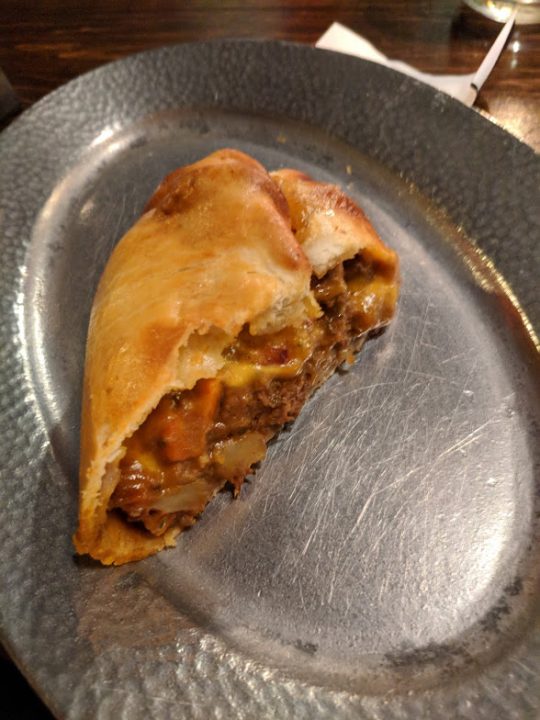 The pasties at Cornish Pasty Co are amazing.

The strip is probably the most well known part of Las Vegas, so the downtown area might have escaped your attention.

We visited the Cornish Pasty Co for dinner late on Friday night for a taste of the UK and they were as good as any pasty I ate in London, which might not be saying much to some people. But I swear the pasties were good where I got them.

You can take the Banger Brewing Tour, where you’ll see a few strange ales, such as pepper and fruit flavours, being brewed.

Take a photo with a million bucks in cash or check out the world’s tallest functioning fire hydrant, rub a portion of the Blarney Stone, or publicly weigh yourself at the Heart Attack Grill.

Price: All depends on what you do.

3. Grab a Pizza Slice in a Secret Casino Restaurant 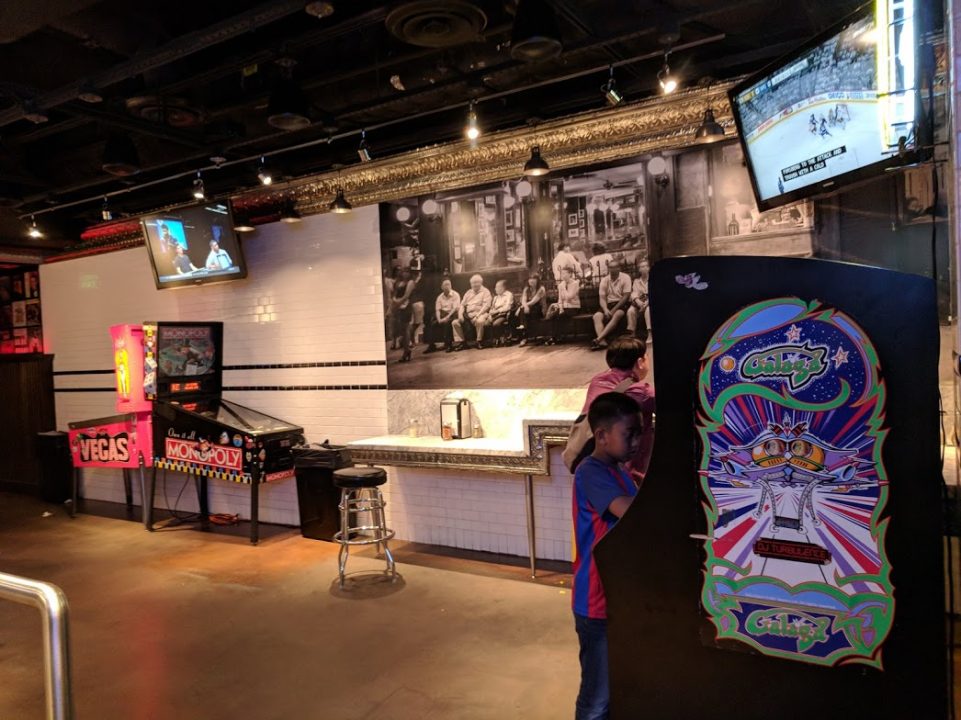 This secret pizza joint comes with its own pinball machine and video games.

It’s a secret that’s not really secret, but it is well hidden so that counts for something. If you want a cheap meal that’s not as decadent as the usual fare on The Strip, you need to get to the Cosmopolitan of Las Vegas casino.

It’s where a “secret” and very delicious New York pizza bar resides. You won’t find a sign, or a map pointing it out, but if you want some authentically great pizza, you’ll do your best to squirrel it out.

Once inside the casino take the escalators up to the restaurant level – the third floor. You should be facing a bustling restaurant called Jaleo.

To its left is a little service corridor, which looks like it shouldn’t be going anywhere in particular. Walk down that corridor and you’ll be in pizza heaven.

It’s a tiny place with bar stools lining the walls, but the pizza is worth it. There’s even an 80s pinball machine in there. 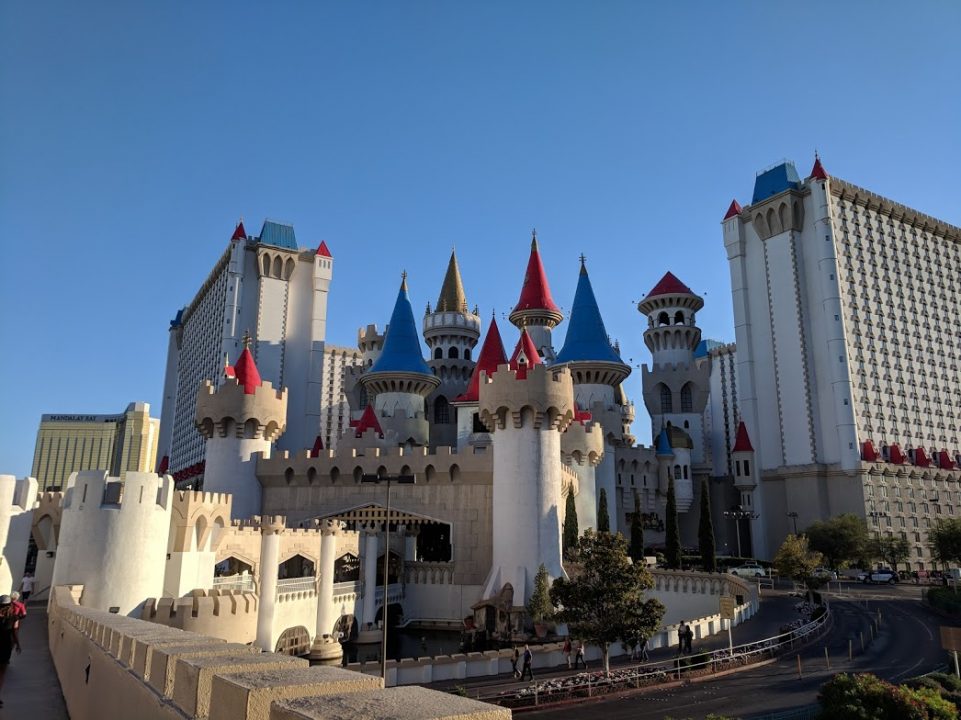 The Excalibur Hotel and Casino takes you back to medieval times.

You might have been to Venice or Paris, but you haven’t seen anything until you experience it all Vegas-style.

They take themed-casinos to the next level, complete with underground shopping malls painted with Renaissance frescos, to Egyptian pyramids, Medieval castles, New York and Paris.

Then there’s the really classy places, like the 9-year-old ARIA Resort and Casino, and the Cosmopolitan of Las Vegas which is just a year younger. 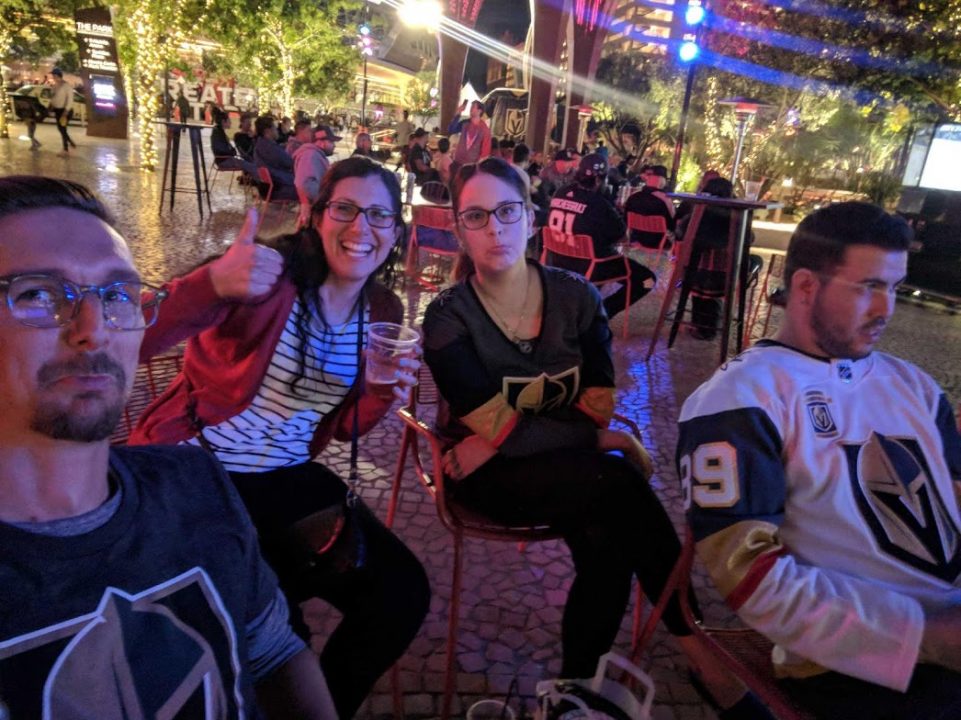 I was ecstatic during the first game, where the San Jose Sharks nailed the Las Vegas Golden Knights. My Vegas-dwelling friends didn’t share my joy.

I was lucky enough to visit Las Vegas during the 2018 Stanley Cup playoffs, when the mighty San Jose Sharks faced off against the new kids on the block – the Las Vegas Golden Knights.

My hotel happened to be right across the street from the stadium as well. 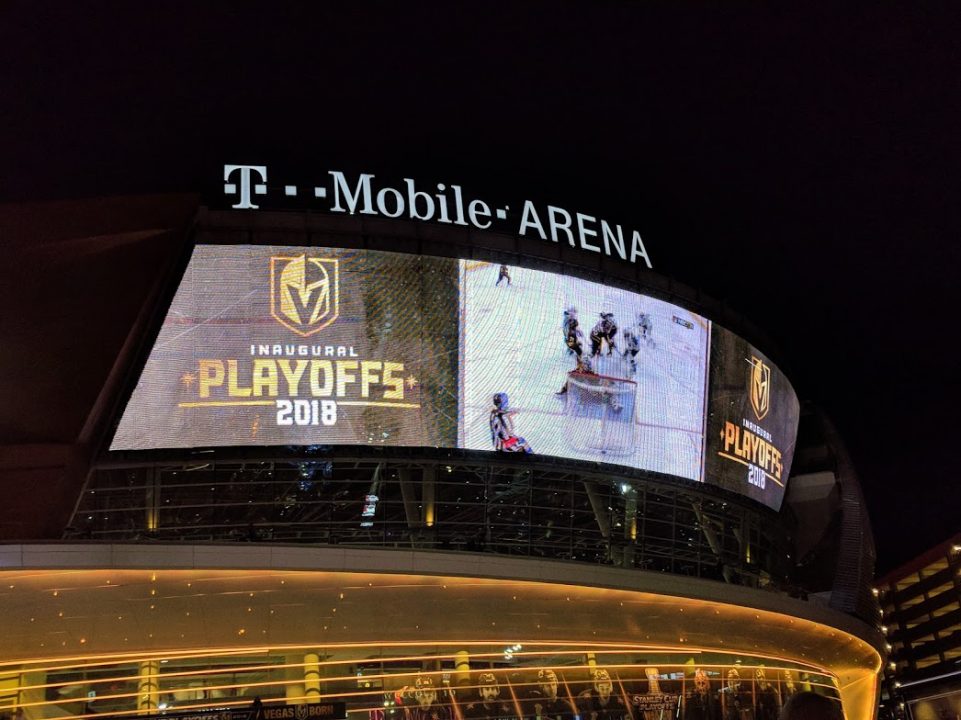 I was much less happy during this game.

Even though tickets for the games were stupid expensive (I guess that descriptor depends on your level of fandom), we still got to experience the awesome atmosphere that Las Vegas is famous for.

The party outside the stadium was amazing. We were packed in with a bunch of Knights fans, and I was one of very few Sharks reps enjoying the live feed, drinks, food and entertainment.

Despite the Sharks’ loss (we won the game before) it was a great place to dance with everyone from little kids to seniors. 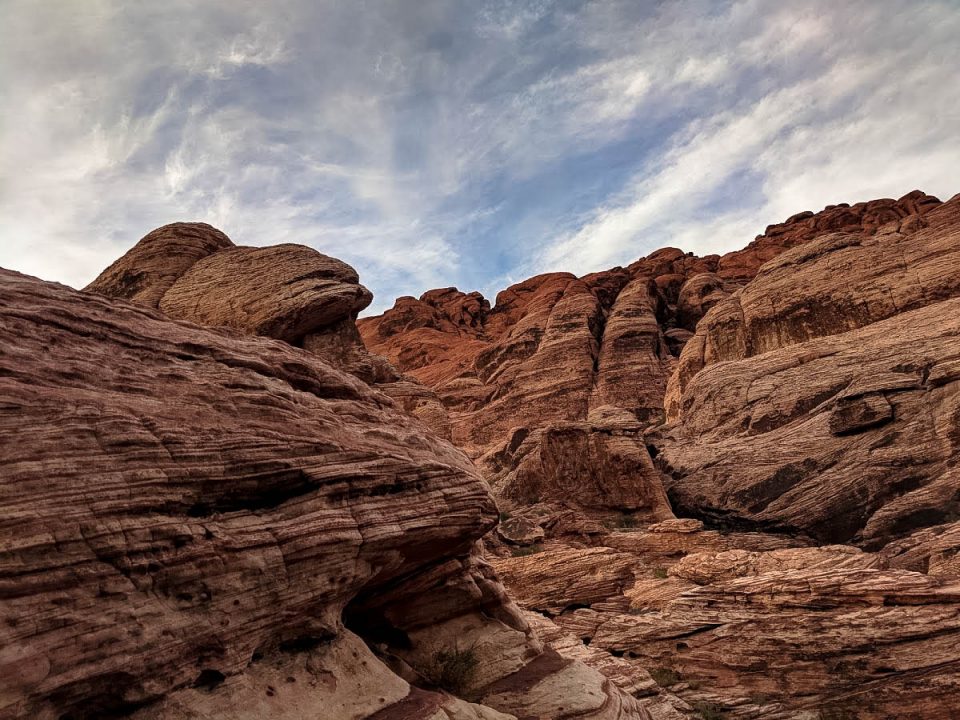 My friend Lisa took me to see a whole different side of Las Vegas – one that I’d never really thought about before. It definitely wasn’t the first thing that came to my head when I started planning my Vegas trip.

She drove us out to Red Rock Canyon National Conservation Area. It’s as far away from the neon lights, loud music and hoards of people as you can get.

Red Rock Canyon lives up to its name – the mauve-hued rocks and dirt stretch for miles and make for an impressive landscape. Hear more about our sadly short trip to Red Rock Canyon in my Day Trip from Las Vegas post.

If you’re planning to visit, make sure you take plenty of water and food with you.

Price: Entry to Red Rock Canyon National Park is $15 for a car or truck, $10 for a motorcycle and $5 for pedestrians and cyclists 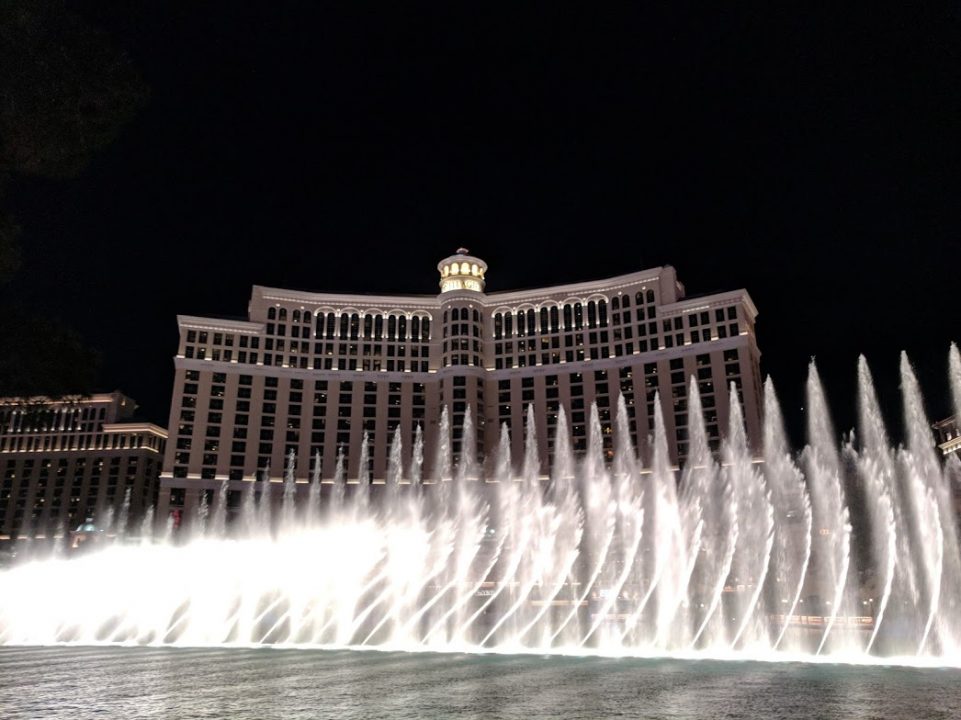 Get to the Bellagio at least 10 minutes before the show for a good spot.

It’s cheesy, and a little bit kitsch but you just can’t visit Vegas without watching the Bellagio’s fountain show. It’s almost against the law.

And while we’re on the subject of cheap things to do in Las Vegas, this has to be the easiest. Probably the shortest as well.

If you don’t know what I’m talking about, the Fountains of Bellagio show is basically a series of water jets set in the large pool outside the hotel. More than 1,000 jets are synchronised to music and lights for a bit of extra ambiance.

They’re so popular that the hotel runs the show every half hour between 3pm and 8pm Monday to Friday, and every 15 minutes from 8pm to midnight.

So if it looks too crowded, you won’t be waiting very long for the throng to disperse and give up the prime positions. 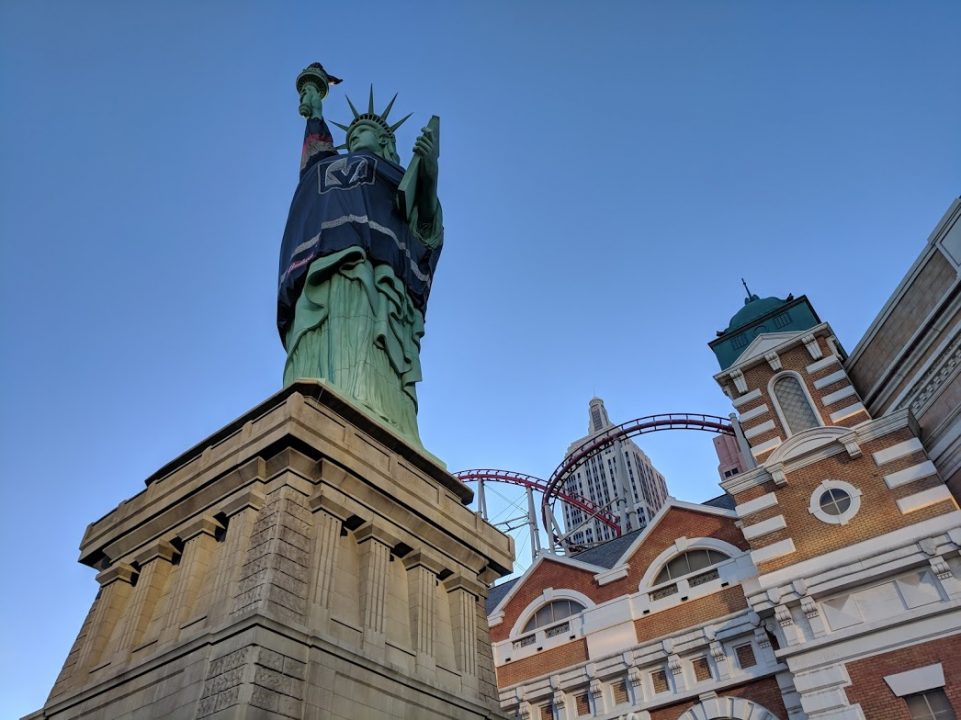 Maybe don’t eat too much before riding the Big Apple roller coaster.

When I think hotels and casinos, roller coasters are probably the furthest thing from my mind.

But Las Vegas doesn’t follow the rules, so there are about six coasters snaking around casinos on The Strip.

If you’ve read about my visits to Six Flags and California’s Great America, you already know that I’m a selective daredevil. I was brave enough to try my first upside-down roller coaster just a year ago. That should tell you how chicken I am. 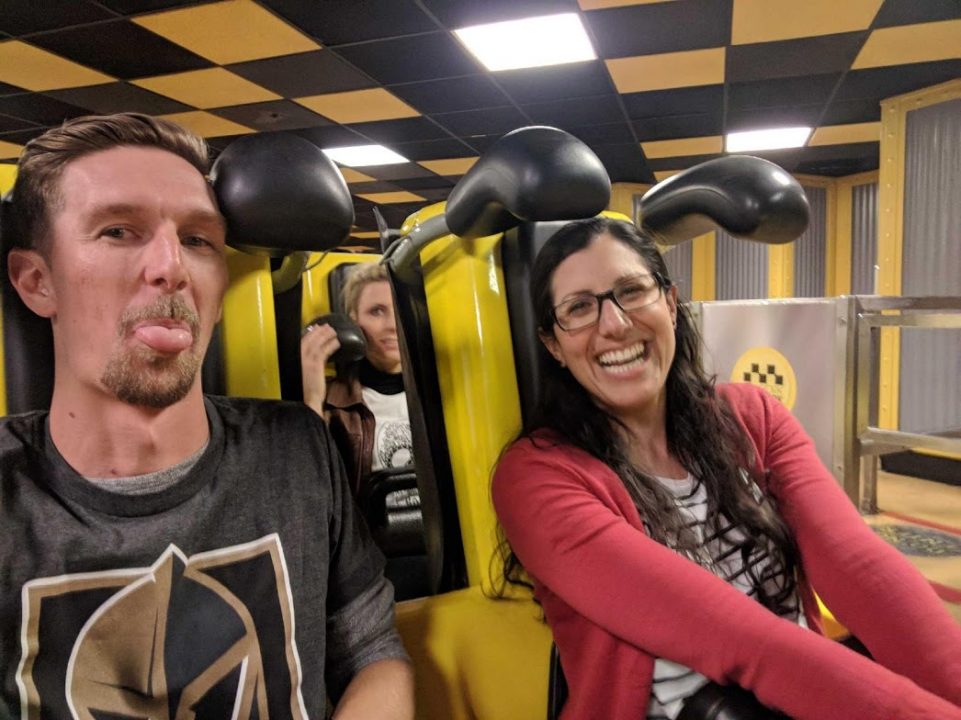 Not quite proof that I rode in the first car of a scary roller coaster. But it’ll do. Cheers to Gavin for making me.

So when a work mate decided that if I was going to ride New York, New York’s Big Apple Coaster, I had to do it properly. That meant sitting in the front seat of the coaster cars.

The line for that front seat was long – we waited about 30 minutes to nab the coveted spot. But it was totally worth it – Gavin was right – always ride in the front seat of the roller coaster. Even if you’re absolutely packing it the entire time and have to close your eyes for the loops. 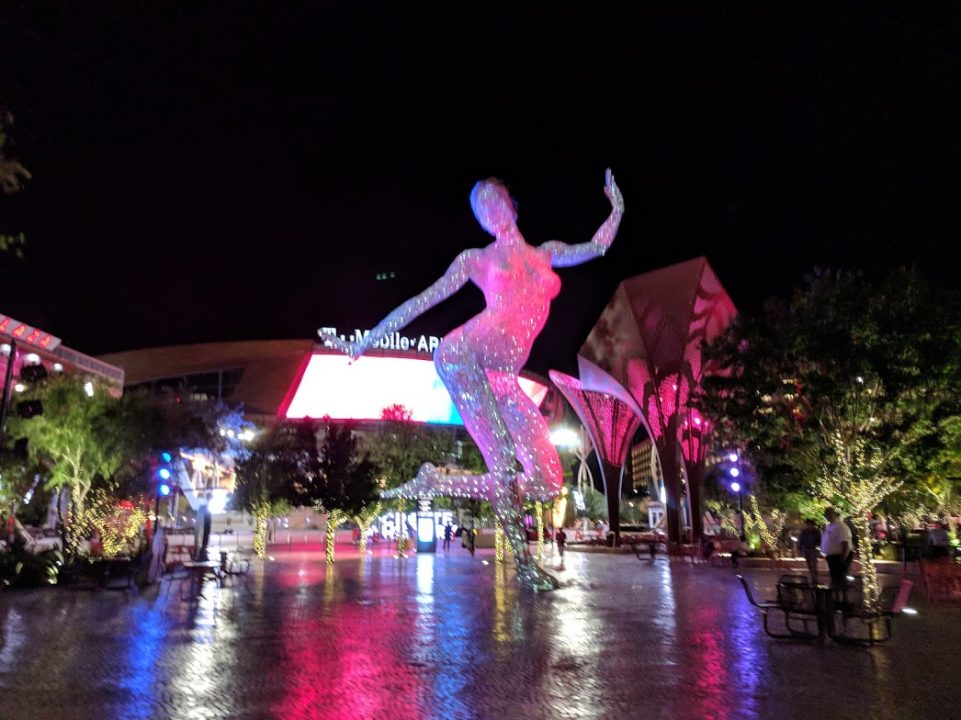 Full disclosure, I’m not the clubbing type. I’m actually the furthest from that ‘type’ than anyone on earth. Everything from the style of music (I’m such a grumpy old lady), to the atmosphere just makes me want to turn around and run away.

But we did go to a Hookah club while I was in Vegas for fun. I have no clue what it was called, but it was the first time that I’d gotten into trouble for being on my phone outside of school. Who am I kidding? I didn’t have a phone at school, I’m too old for that.

Having said all that, my cousin and her friends visited Vegas a couple of months after me and had a blast going out every night. So don’t listen to my old face, take their advice and get to at least one club.

Price: Varies, but women get in cheap or free usually.

There is nowhere like Las Vegas when it comes to people watching. It embraces weird like a granny hugs a grandson who hasn’t visited in months (kids, call your granny, she misses you).

Grab yourself a coffee, a cocktail or a snack and take in your surroundings. People seem to let their guards down a lot more easily when in Las Vegas… it’s probably where the saying comes from. Trust me on this, you won’t be disappointed.

Price: Whatever your coffee or cocktail sets you back. 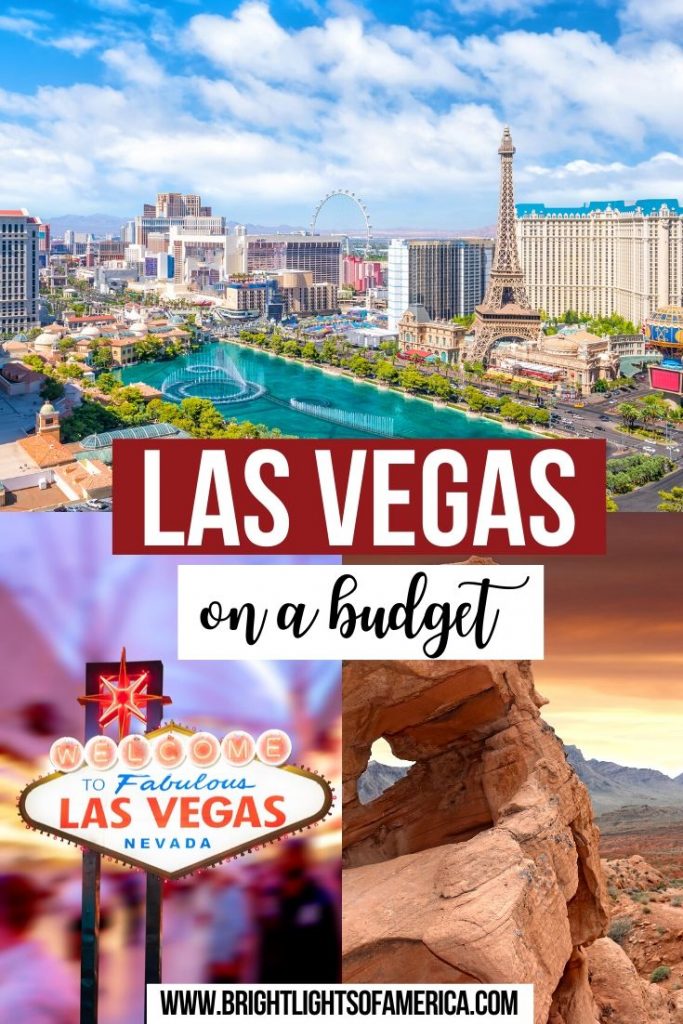