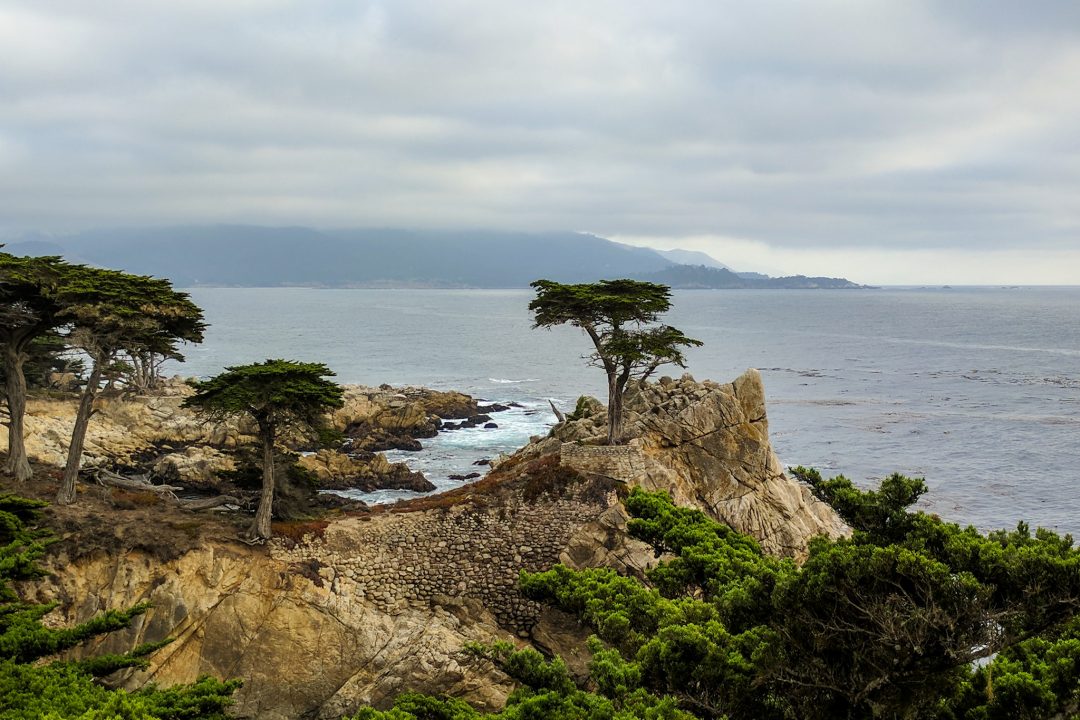 California’s 17 Mile Drive, Monterey has a reputation for a reason. It stretches for miles (17 of them, as the name suggests) of beautiful coastline, glimpses of wildlife, nature and gorgeous houses.

Whether you’re stopping at Monterey or Carmel-by-the-Sea on your trip or just driving through on a roadtrip, 17 Mile Drive Monterey has to be on your list of stopping points.

Fittingly, there are 17 scenic stopping points along 17 Mile Drive Monterey, with two entrances at either side of the stretch.

READ MORE:
A weekend in Monterey and Carmel-by-the-Sea
Powered by Inline Related Posts

At first I was a little bit turned-off by the idea of having to pay to see 17 Mile Drive, but thinking about all the road and parking area upkeep involved, it’s a good way of making sure the area remains beautiful for everyone.

We’re breaking these maps into two parts, mostly because Google Maps only allows you 10 stops per journey, but I think it also helps visualise the trip a little better.

We’re starting off at the 17 Mile Drive entrance known as the Pacific Grove Gate, which is apparently the easiest to get to.

I think I used a different gate and kind of got lost because I’m never not locationally-challenged, so I’ve made this as easy for you as possible. Either use my map, or type “Pacific Grove Gate” into your Maps app and go nuts. 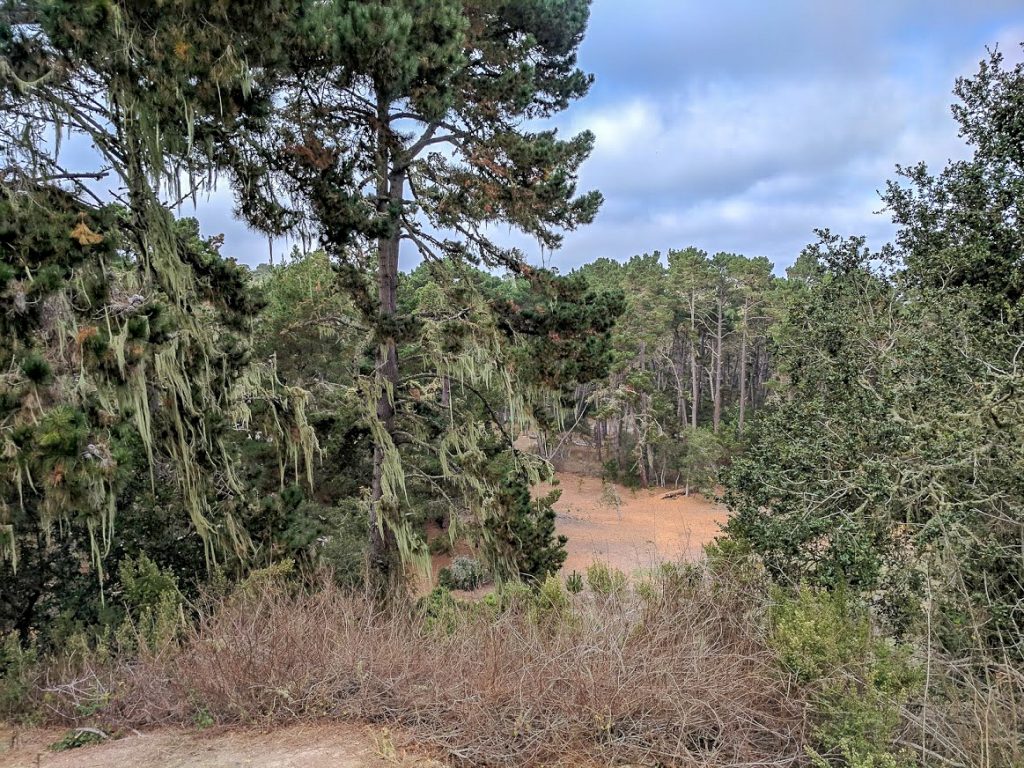 I’m going to be honest, Shepherd’s Knoll was my first stop along 17 Mile Drive and I was underwhelmed by it. Whatever you do, don’t use it as a marker of what the rest of the views will be like.

I’d go so far as to say that you can afford to skip it altogether if you’re pressed for time and want to see the best bits.

It’s said to offer a view of Monterey Bay from an elevation, but I could only see trees. Which is a good thing because we need more of them! 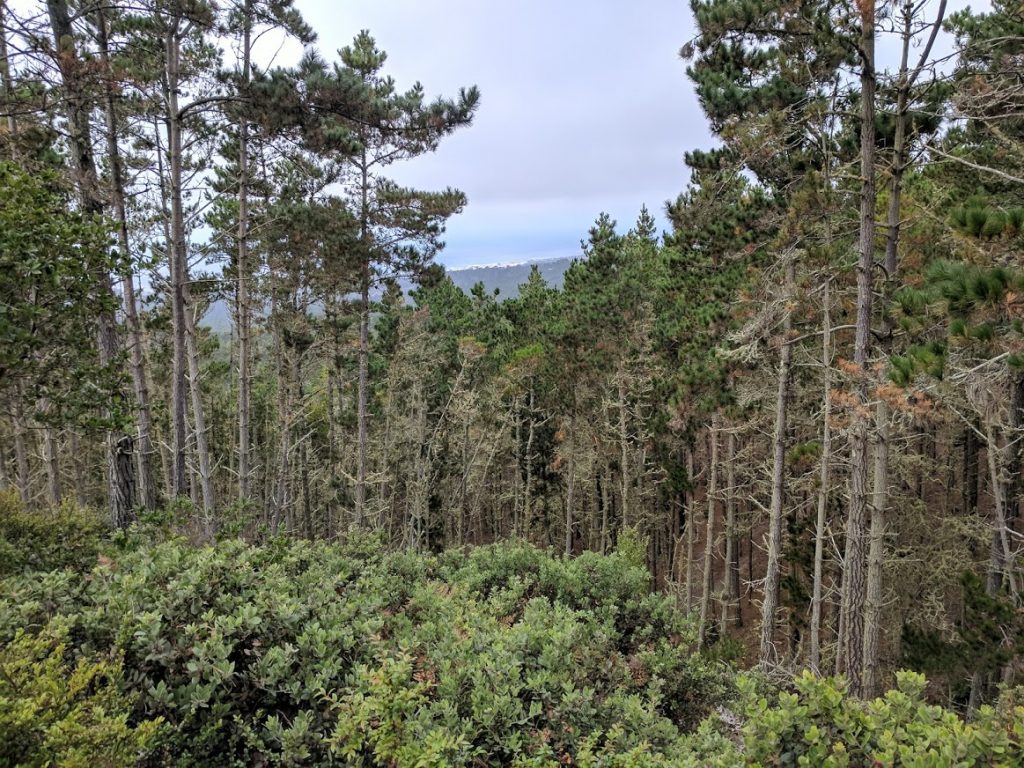 Go for a walk among the Huckleberry trees, you might be walking in the footsteps of Steinbeck.

As its name implies, Huckleberry Hill is filled with trees of the same name. It reminded me of Wimbledon Common in London, where the trees are more spread out than you might usually find in a forest.

You can hear traffic from the distant Highway 1, yet it still feels serene and peaceful either sitting on the park bench to enjoy the hill, or going for a little stroll among the trees on a well-worn path.

I can understand why it’s said that American writer John Steinbeck frequented Huckleberry Hill. You can also see Santa Cruz in the distance (if you squint). 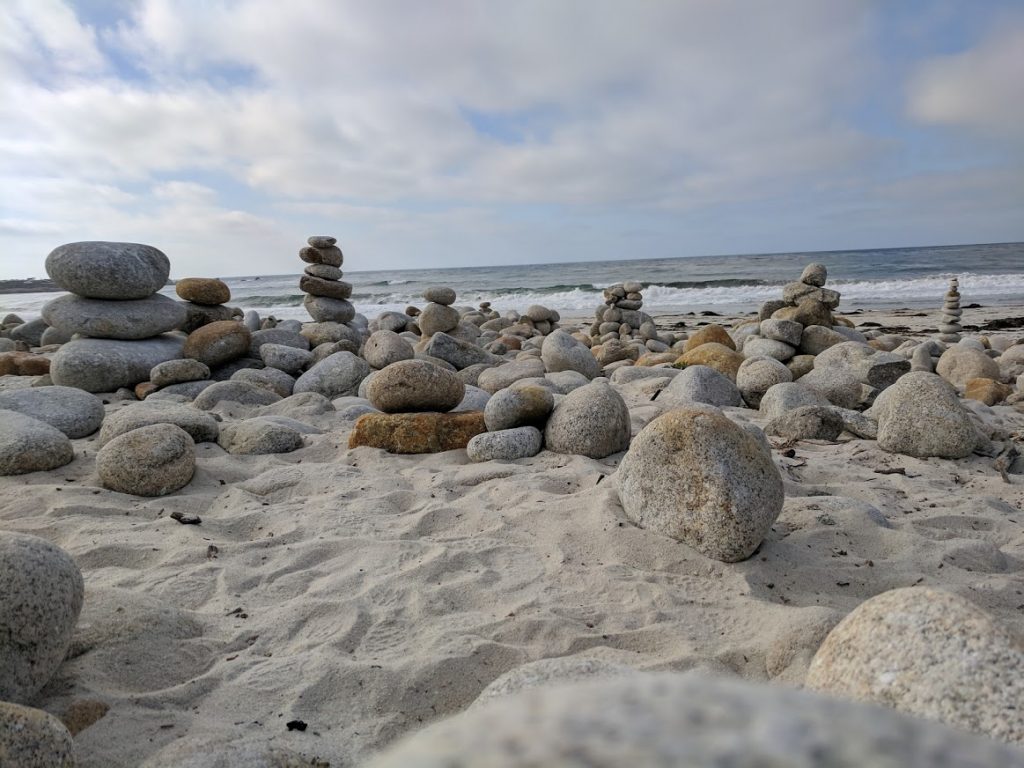 This is where things start to get really beautiful. Park your car in the lot and go for a wander along the boardwalk. It’s a great place to stop for a picnic because it’s got tables and chairs to set up at. You could try taking a blanket out onto the sand, but it’s covered in rock stacks. 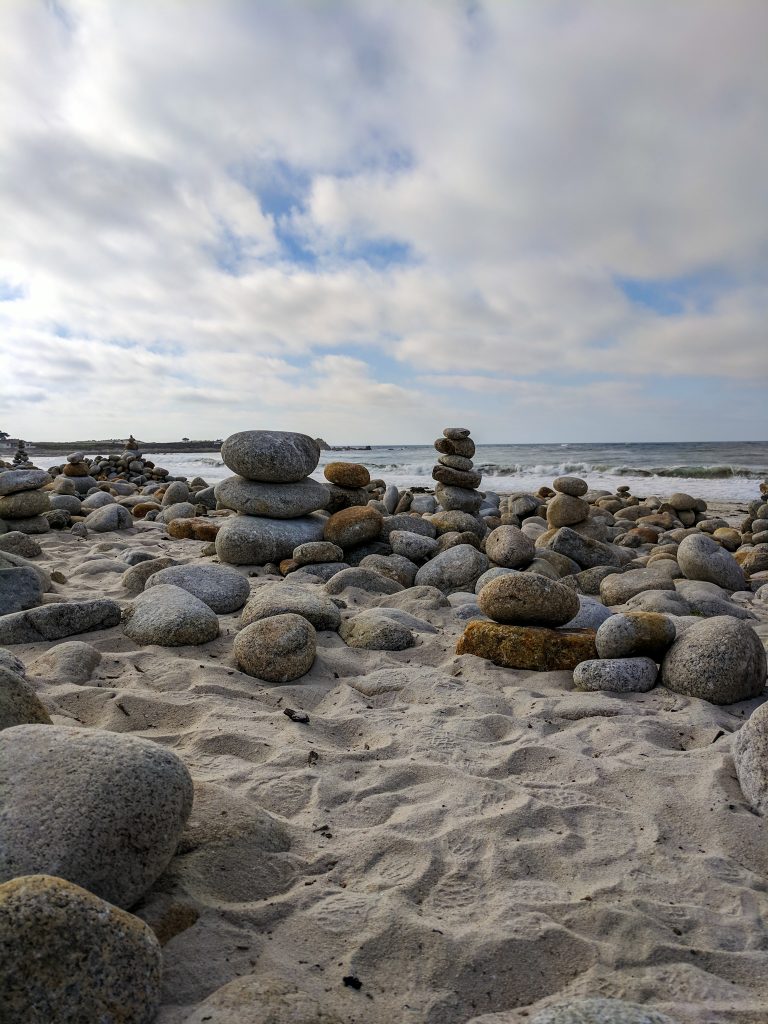 Aren’t they so majestic? And there are small spots of clear sand to picnic on, if you’re really keen.

For all my fervent Googling, I cannot find out whether these rocks are just routinely washed to shore and built into stacks by visitors, or what the deal is. Keen walkers can follow the boardwalk north to an overlook, but be warned, it is an uphill climb.

It’s called Spanish Bay Beach because Spanish explorers, who were searching for Monterey Bay, camped out there in 1769.

Anyway, it’s also our fourth stop on 17 Mile Drive Monterey. If you wanted to see waves on your journey, this is the place to be.

It’s the roughest part of sea along this stretch of coastline, most probably because of submerged rocks that dot the coastline, forcing waves to break early. Either way, it’s hypnotic to watch. 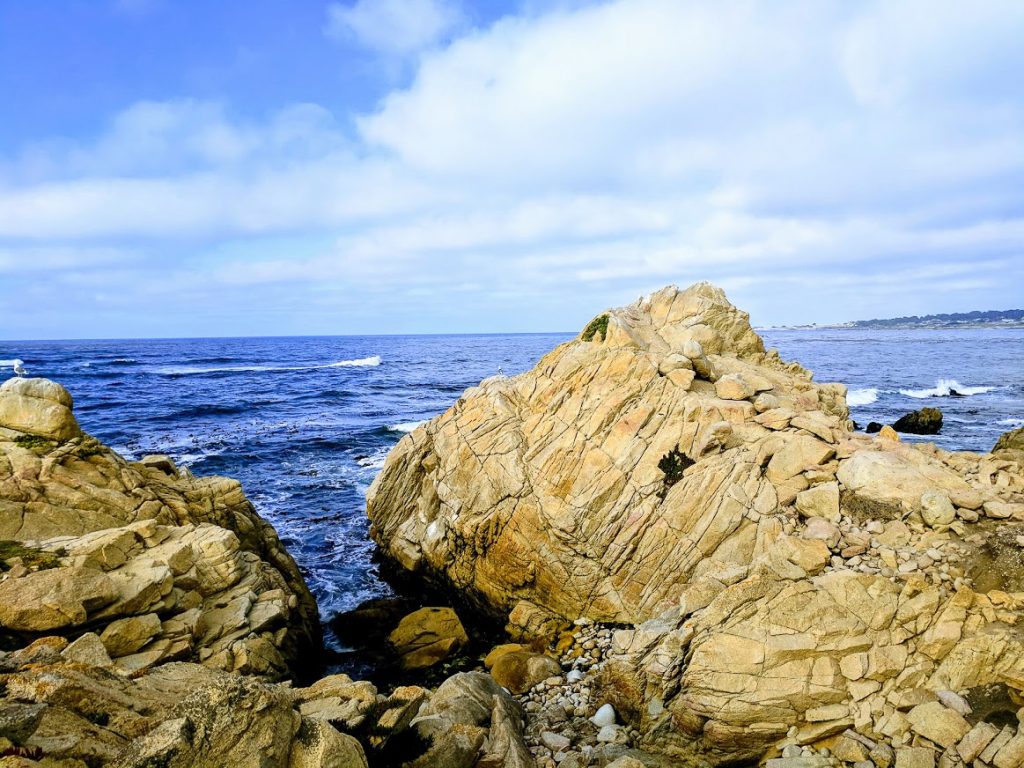 The poor sailors who mistook Point Joe for the entrance to Monterey Bay, were often the victims of shipwrecks. You only have to glance at the craggy coastline to understand why so many ships were dashed against rocks in this area.

But why is it called Point Joe? No one’s really sure if it was named after a Chinese man who lived there in a hut made of driftwood in the early 1900s, or if he was named after the Point. 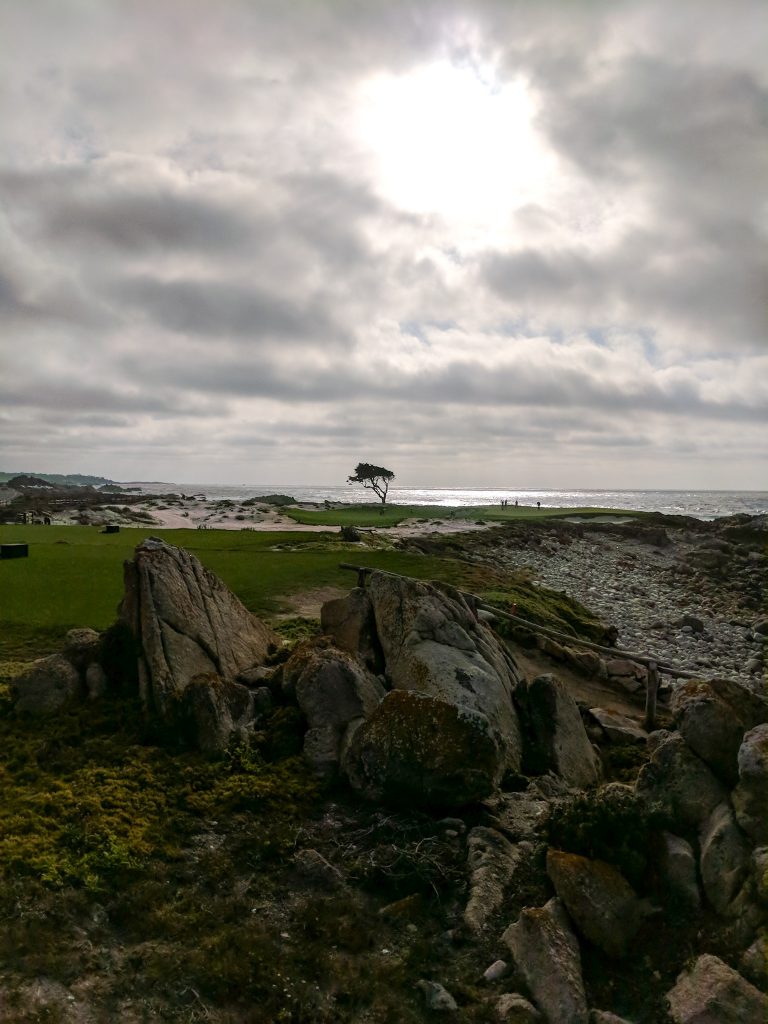 Even back then, Point Joe was a tourist destination and Joe would make a living selling trinkets to passersby, and looking after goats in the area. 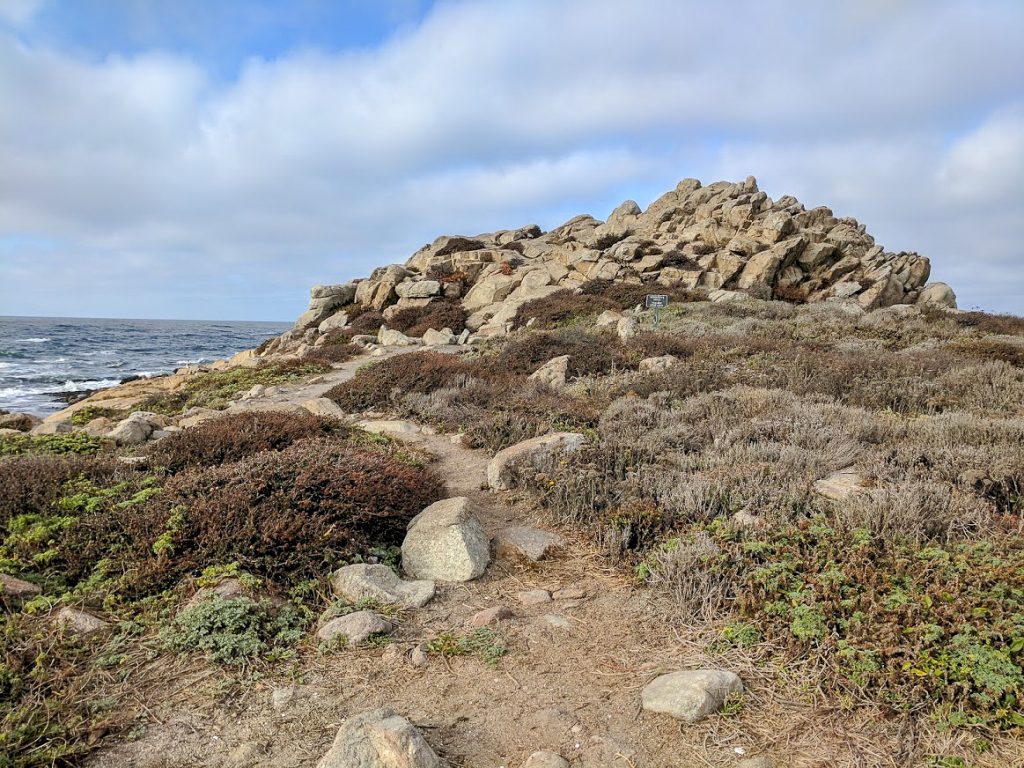 Chinese migrants had a big impact on Monterey, and the work they did was monumental to the area.

Carrying on with  the subject of migrants, China Rock is where fishermen from China built little shacks against the rocks for support in the late 1800s and early 1900s. 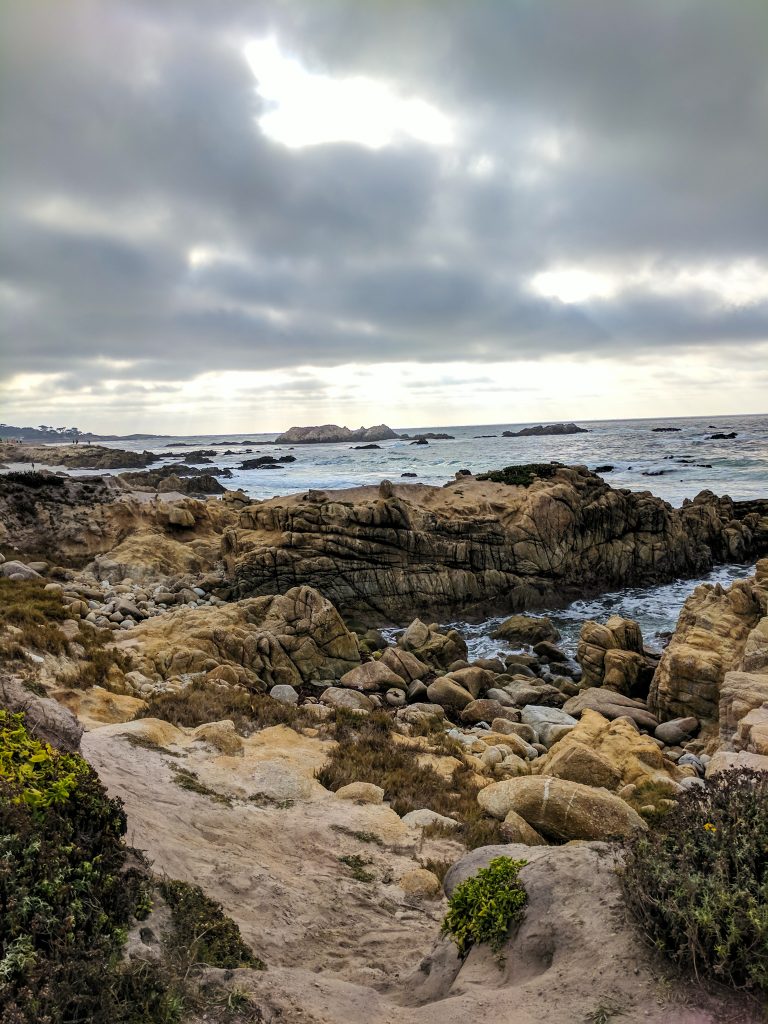 It seems I only visit places when the weather is particularly moody. Here’s the view from the opposite direction to China Rock.

They stayed close to the source of their livelihood. Chinese migrants have a recorded history in Monterey, stretching back to around the 1850s.

READ MORE:
Under the sea at the Monterey Bay Aquarium
Powered by Inline Related Posts

They helped to make Monterey a very successful fishing port, according to the Monterey County Historical Society. 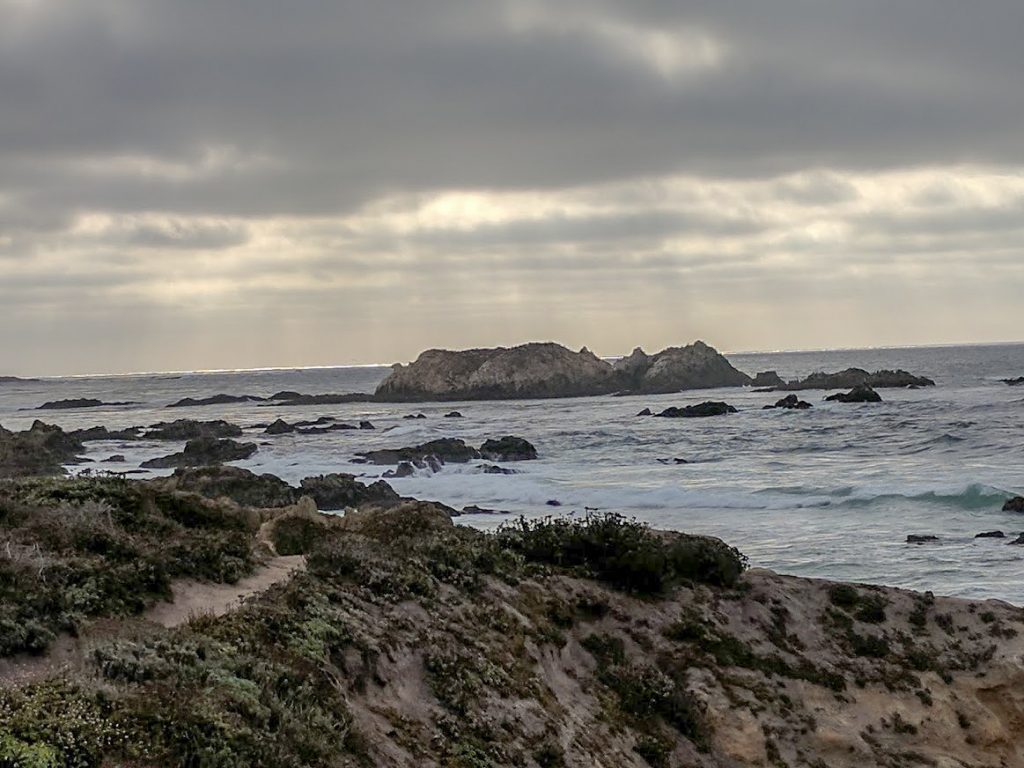 Imagine this rock, with a 1.5 metre thick crust of guano on it. You might be able to imagine the smell too.

Look out to sea at most any time of the day, and you’ll see birds perched on a distant rock here. That’s if you have good eyesight, and the sun isn’t in your eyes.

I have none of that good fortune, but I could smell the birds, so I knew they were there. Probably not a great thing in many people’s books, but I grew up on a farm, I can handle bad smells.

Now, apparently, back in the 1930s, Bird Rock was covered in about five feet (1.5 metres) of excrement and it was harvested for fertilizer. Once the perch was nice and clean, sea lions decided it would be a nice place to lay out in the sun. 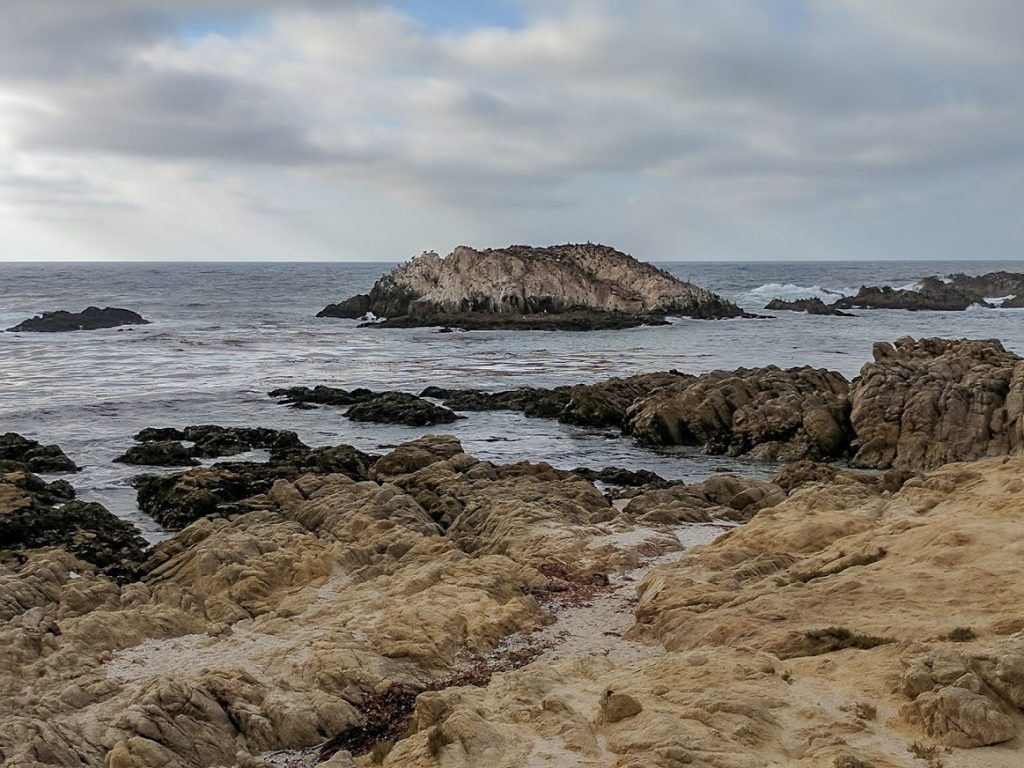 The stinkiest of stinky rocks around!

The weak-of-nose will be happy to listen to the seals barking from the safety of the car park. But those of you who want to get a closer view can traipse along the beach, up the staircase, and over to the lookout point, where you can see and smell the seals in all of their glory. 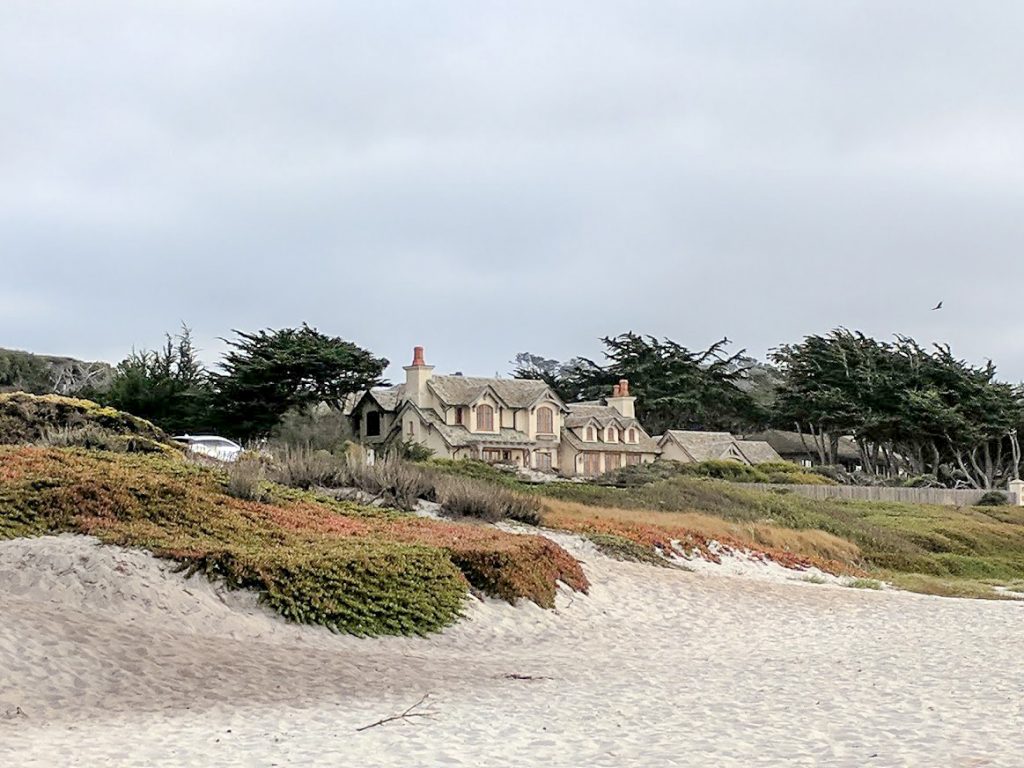 Want a house of your very own on 17 Mile Drive? Get ready to pay a very large fortune.

The best part of this stop was the houses on the other side of the street – there’s the colourful Gingerbread House, along with a few other quintessentially British-looking cottages. 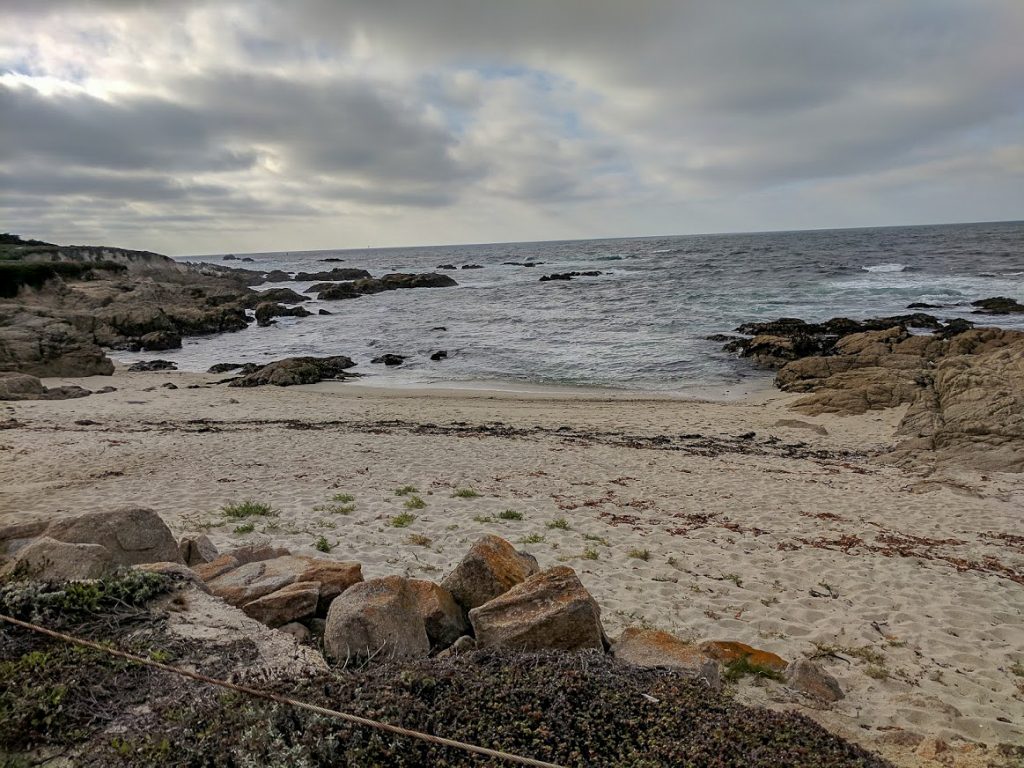 Where seals come to have their pups from April to June.

A quiet little beach on one side, where you can take children to splash in the water. That’s if it’s not seal pup season, since it’s one of the primary habitats for seals to have your pups in the area.

In my humble opinion, there are a couple of marked stops in part two of this drive, that you can skip without taking away from the experience at all. My camera battery gave out at Ghost Trees Pescadero Point, so I don’t have photos of everything. But I can still give you an idea of what’s up ahead. 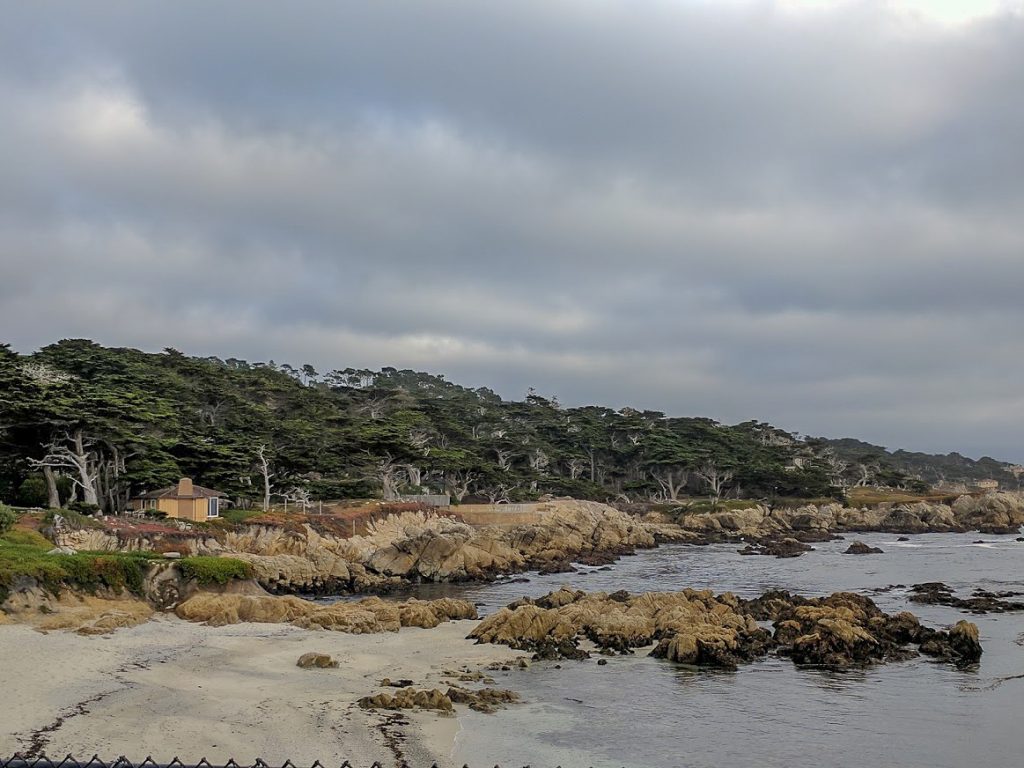 I hope you’re not starting to get coastal view fatigue

Head into what looks like a driveway (don’t worry, it’s signposted) into a large car park for Cypress Point Lookout. There’s a sheer drop at this spot, so it’s behind a chain link fence to keep everyone safe.

You can get a great view of the sunset, or spy on the seals on the white sand beach below. Back in 1542, Spanish explorer Juan Rodríguez Cabrillo named the beach Cabo de Nieve (Cape Snow). But the part I loved most was the view of the coast dotted with towering Cypress trees. 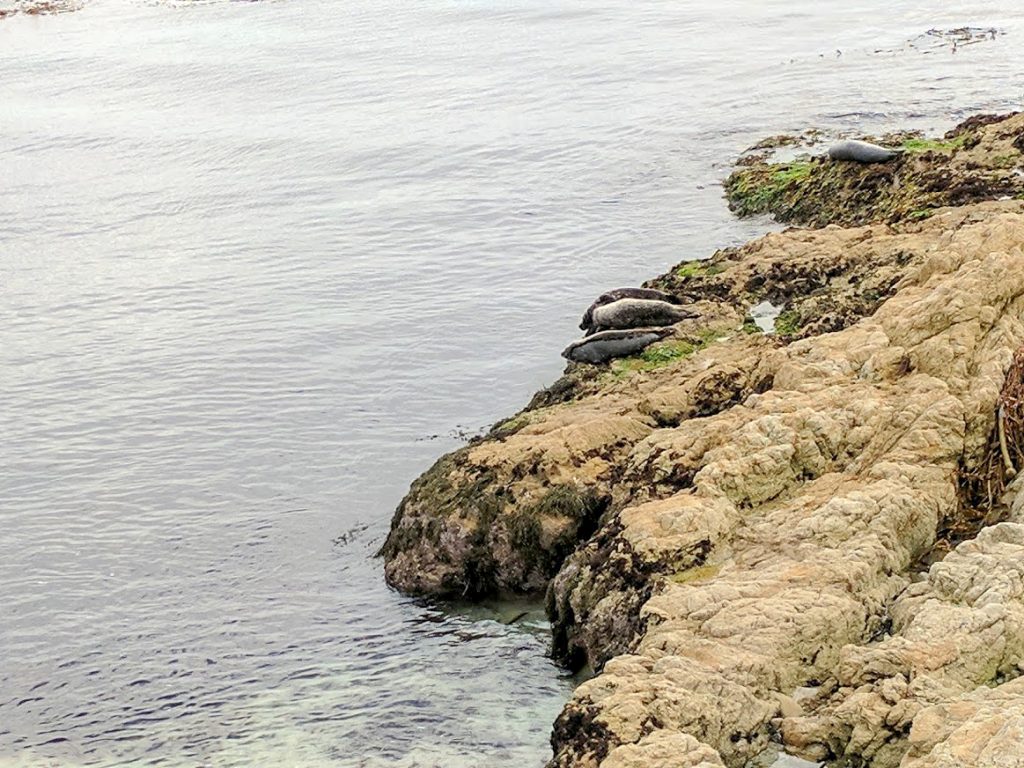 If you’re lucky you’ll spot some seals or sea otters lazing on the beach here.

The lookout is closed from April 1 to June 1 because it’s an area where seals come to have their pups and they need some peace and quiet. If you’re lucky, you might also catch a glimpse of some sea otters floating around. 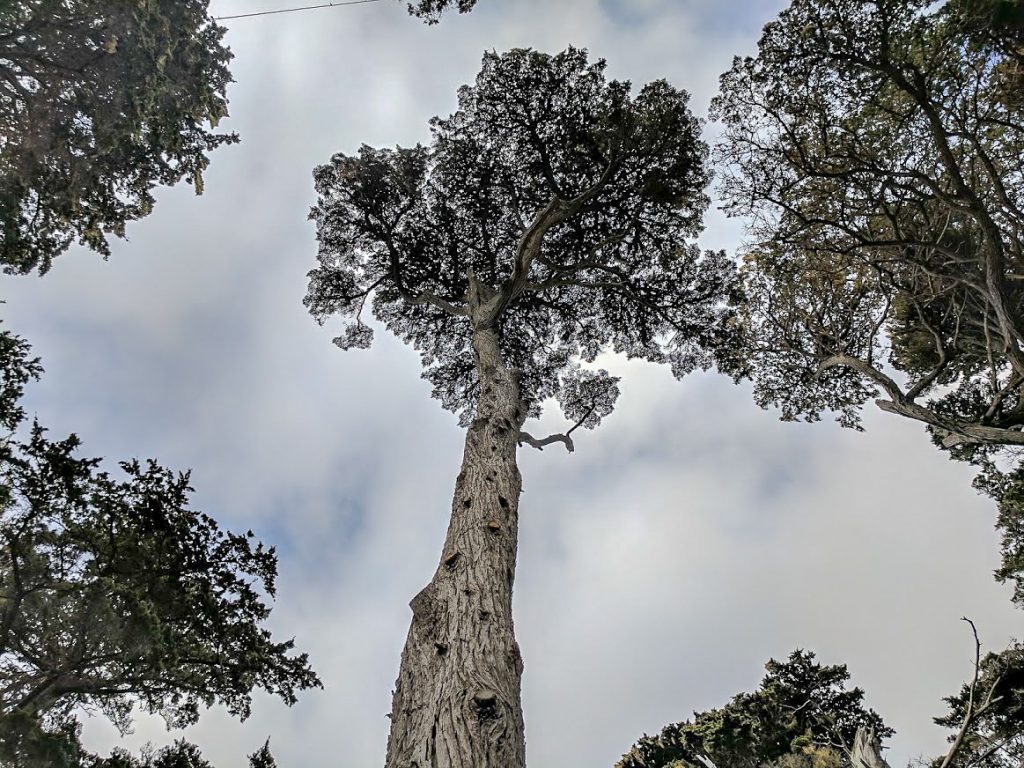 The Cypresses in Crocker Grove could soon fall victim to beetles.

Here you’ll see the oldest Monterey Cypress trees – they’ve been growing in this spot for 300 years. They are also the only naturally-occurring Cypress trees in the area, along with those at Point Lobos south in nearby Carmel.

These trees are characterised by their gnarly branches, formed in strange shapes by the coastal wind. Crocker Grove was named for a family who lived in the area when it was first formed into a residential area. 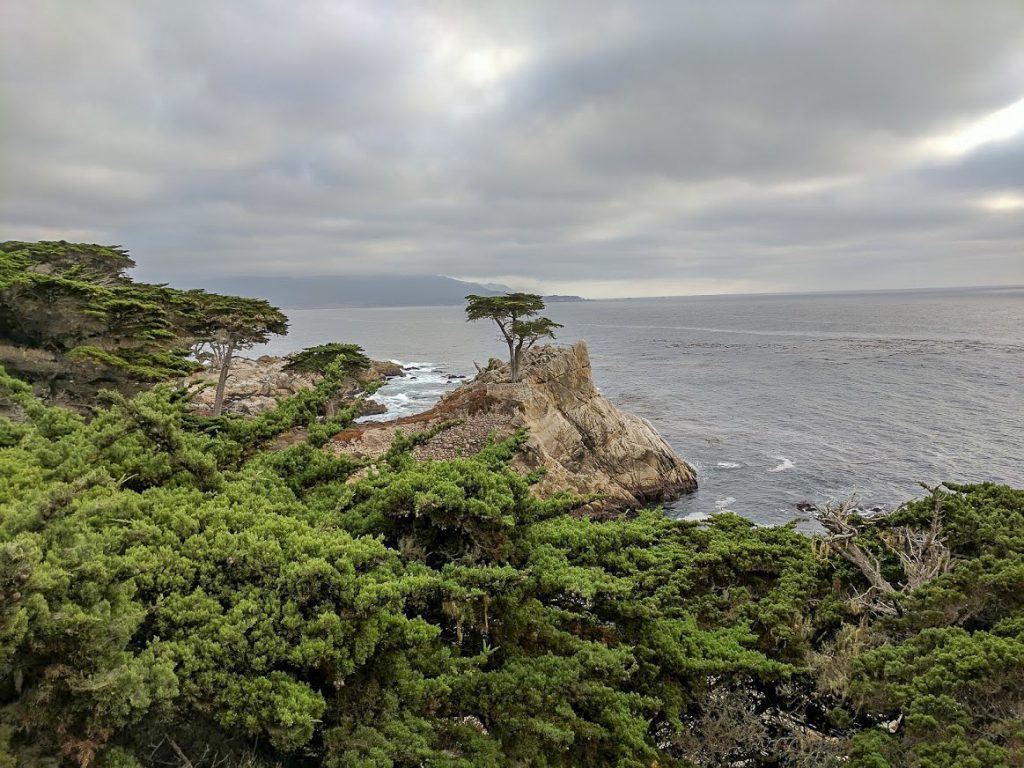 The loneliest Cypress reminds me of a fortress. It’s also one of the most-photographed spots on 17 Mile Drive Monterey.

This tree sits out on a rocky outcrop, eternally looking out to sea, like a sentry ready to raise the alarm. 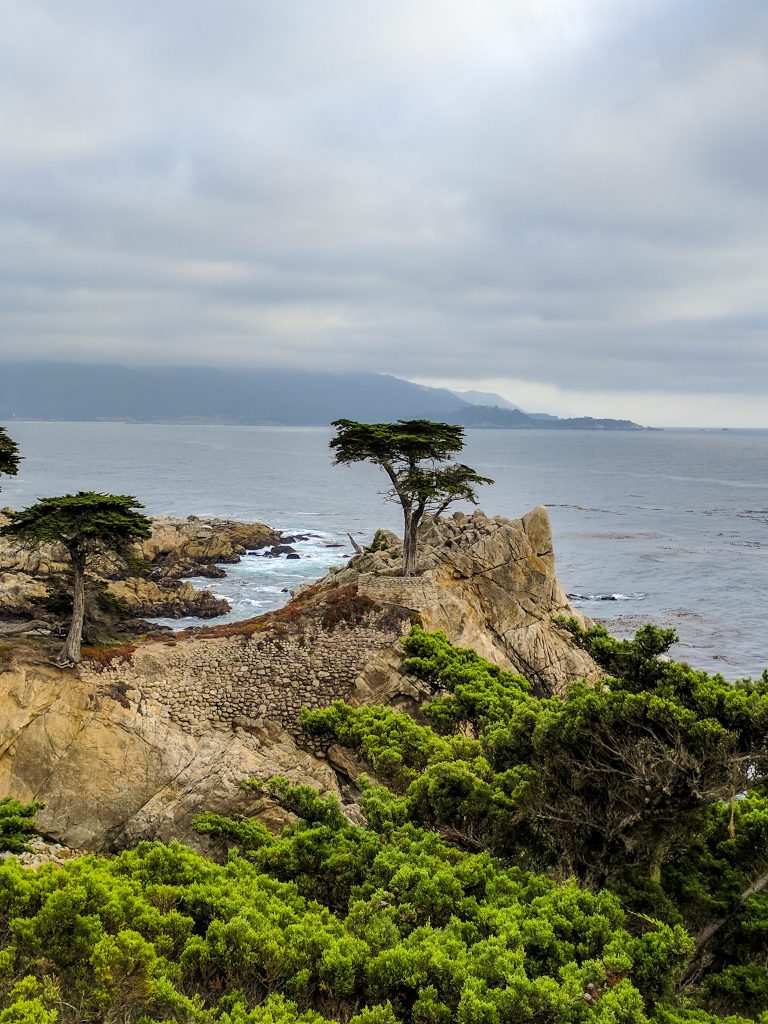 Don’t worry, the Lone Cypress has been reinforced to ensure it doesn’t fall.

At more than 250-years-old it’s a senior amongst the Monterey Cypresses, and has weathered many a storm and wind gust coming off the Pacific Ocean. It is now bolstered by fences and wires to ensure it lives out a full life. 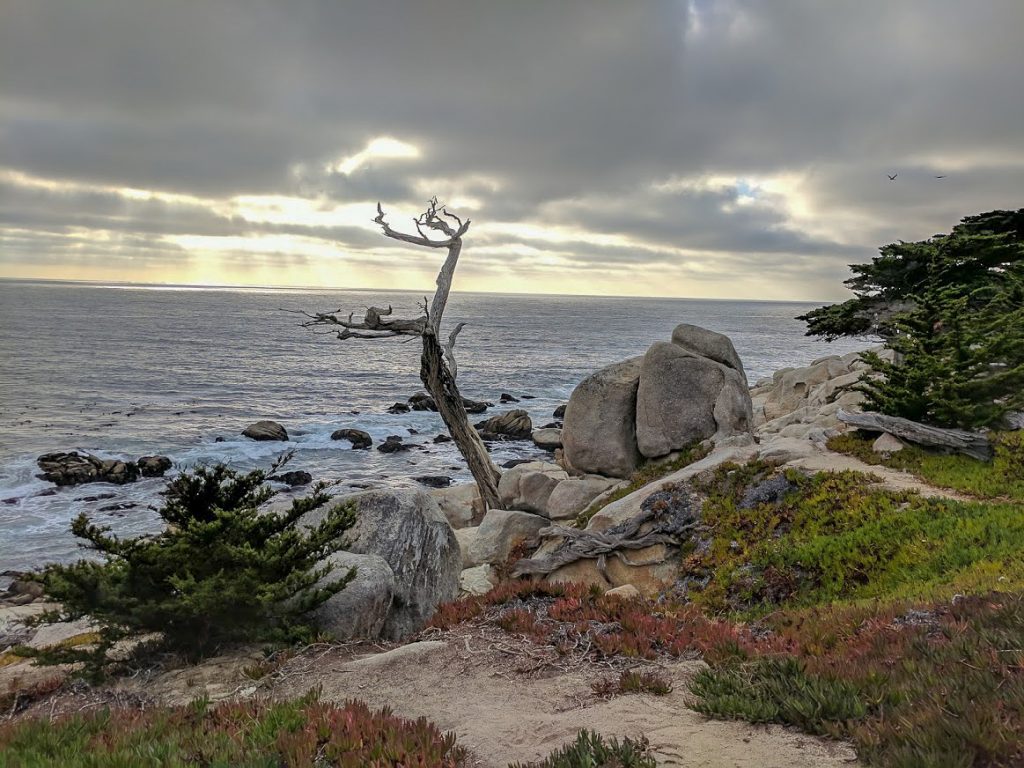 The Ghost Trees at Pescadero Point took on an even more haunting presence in this light.

I am so glad that my camera held out to this long before the batteries gave up. These are the ghosts of Cypresses that have died, leaving only the gnarled white trunks and branches behind to tell their stories.

Unfortunately beetle blight may have a hand in sending all of the area’s Monterey Cypresses the way of the ghost trees over the next 20 years. These trees make for a beautifully haunting stop on Monterey’s 17 Mile Drive.

The next three stops can be drive-bys if you’re not that interested in golf, shopping or horsing around.

The sprawling Visitor Center has an equally large carpark, and is great if you need a snack or want to trawl the gift shop for souvenirs.

But honestly, there were some much more lovely places to stretch your legs earlier in the trip.

Every golfer’s dream, the Pebble Beach Golf course is akin to a major championship course, and is open to the public. It was built back in 1919 and will host its sixth US Open Tournament in 2019.

It’s the top ranked public golf course in the USA.

Take a guided horseback tour from the equestrian center that opened way back in 1924. It also hosted the US Olympic team trials before the 1960 Olympic Games.

I drove past Ford Meadow at the beginning of my trip (I entered through the Carmel Gate), but missed the sign and the meadow as I was trying to get oriented. The meadow is named for Robert F. Ford, who felt at home whenever he passed by the meadow. 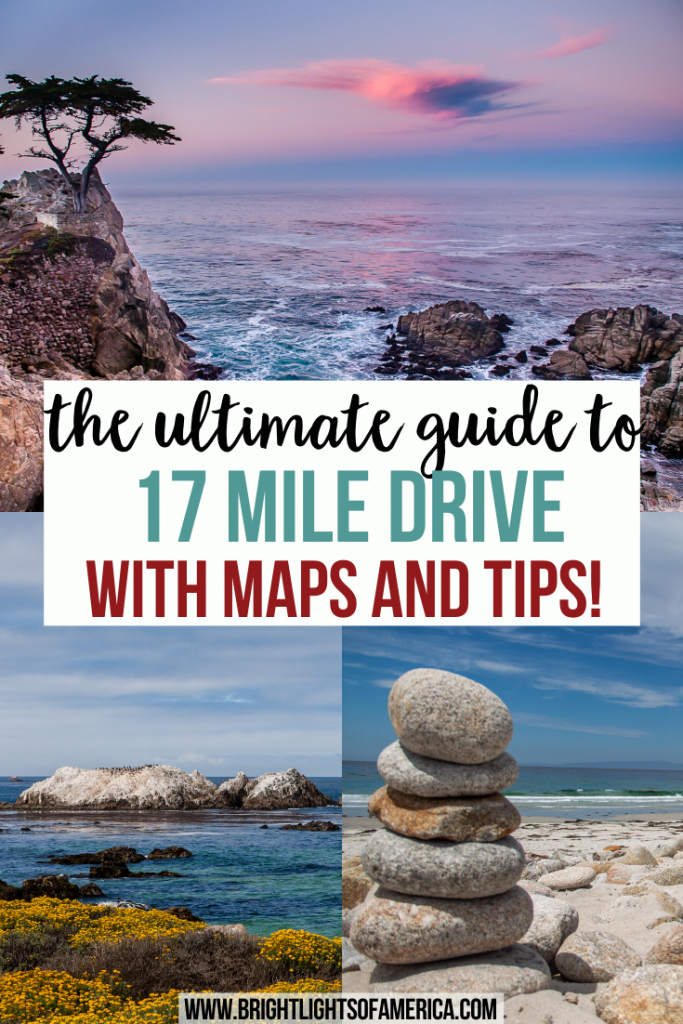