Travel back in time on a Jamestown train ride 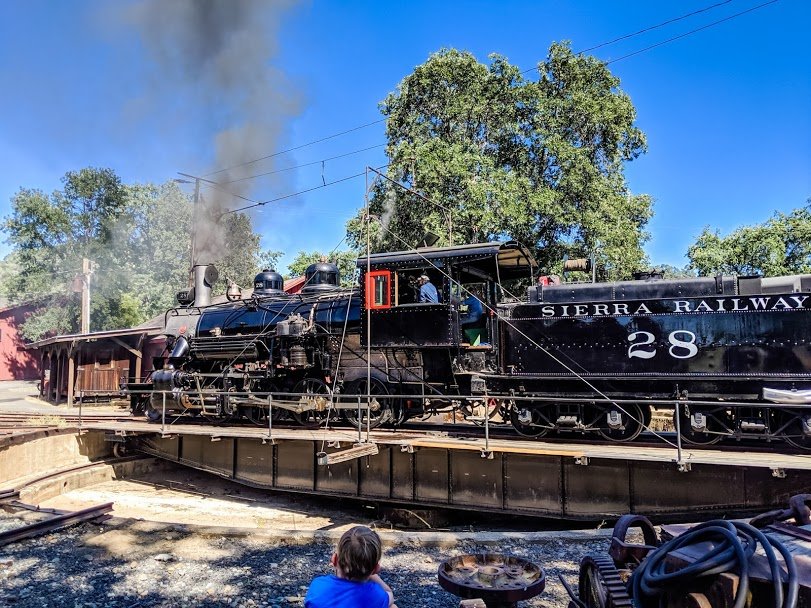 The California gold rush town of Jamestown is easy to get to from San Francisco for a weekend getaway, with the added gift of being entertaining for adults and kids.

Start with a Jamestown train ride, then head over to neighboring Sonora for a taste of small town beauty. Tuolumne County has lots to offer road trippers and weekend travelers. 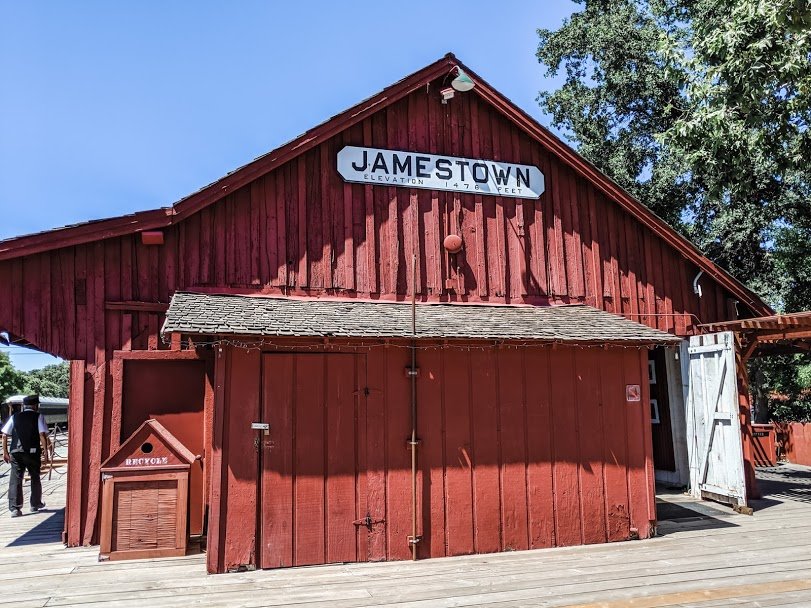 But today we’re focusing on all things train-related. From vintage steam trains to diesel engines, Railtown 1897 State Historic Park in Jamestown has you covered. That’s right, it’s a state park as well as a train enthusiast’s paradise. 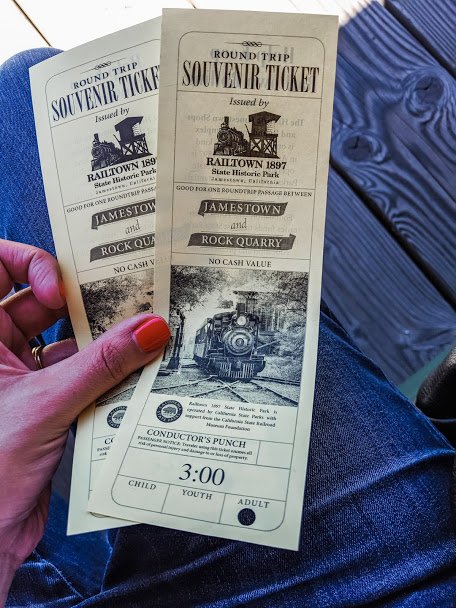 Depending on the day and the time you book your tickets, you can experience what it was like to ride a steam or diesel locomotive around the time of California’s gold rush.

That in itself is pretty exciting, but you also get in-train car commentary from volunteer conductors who dress the part to give you the facts, figures, and history of area and its train lines. 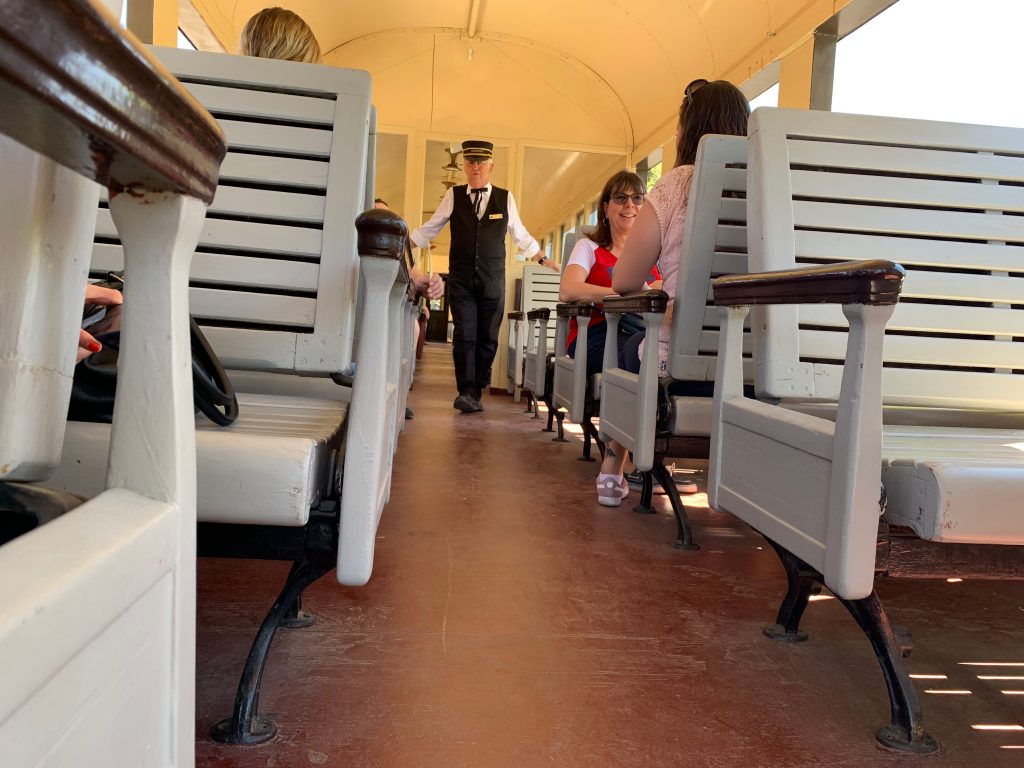 Railtown 1897 holds locomotives spanning from the 1860s, all the way to the 1970s. It’s not only about the train ride though.

While you’re there, take advantage of the wandering through the park to visit the Blacksmith’s area, the shed where the trains are stored while they’re not working, the timeless station house, and if you’re there at the end of the day you can watch the last train use the roundhouse before it heads into the shed for the night. 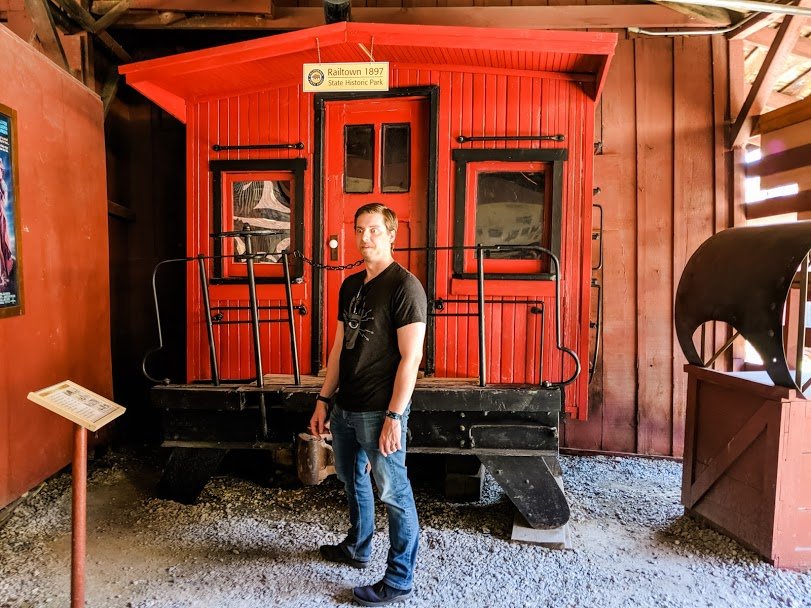 Mr M, channeling Michael J. Fox’s expression while hanging off the end of this caboose in Back to the Future III.

Have you seen Back to the Future III? What about Petticoat Junction, Unforgiven, Little House on the Prarie, Rawhide, Gunsmoke, or The Lone Ranger? All of these movies and TV series’ were filmed at Railtown 1897 State Historic Park, as well as about 200 others.

One of my favourite stops while wandering around Railtown had to be the caboose end that was built and mounted on a flatcar for Michael J. Fox to hang off in Back to the Future III. 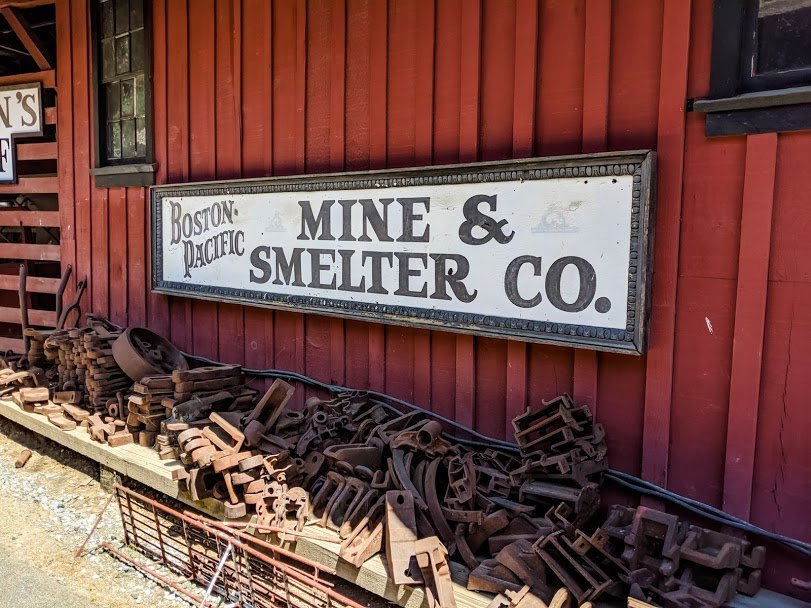 Between 1919 and the 1970s, film makers took advantage of the Jamestown facilities including the roundhouse and authentic Sierra Railway shops as backdrops for their gold-rush era films.

Once diesel engines began to gain popularity in the 1950s, Railtown was able to use its film income to continue maintaining the steam engines and its stores, so it continued to receive money from Western film makers through the 1970s. 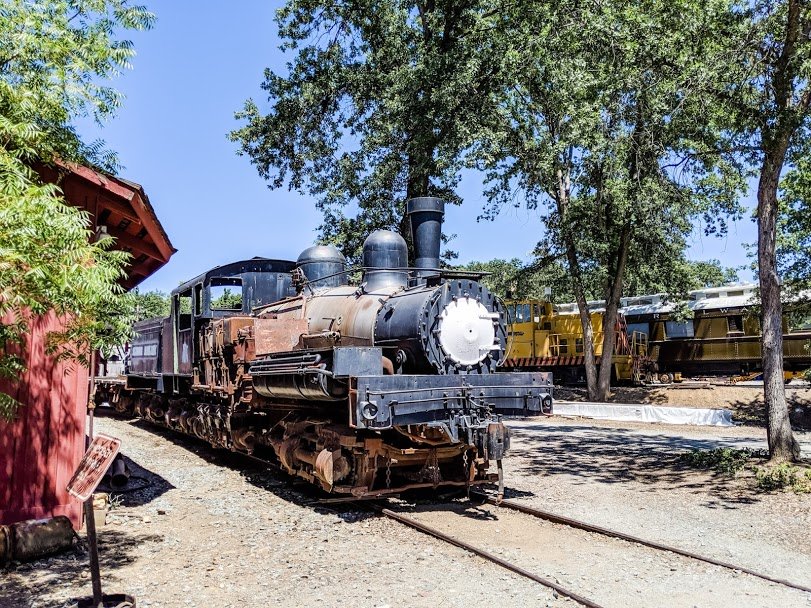 The area was favoured because there is a good stretch of track that runs through the state park with nothing but trees and rocks on either side, meaning that film makers don’t need to worry too much about anachronisms making their way into shot. 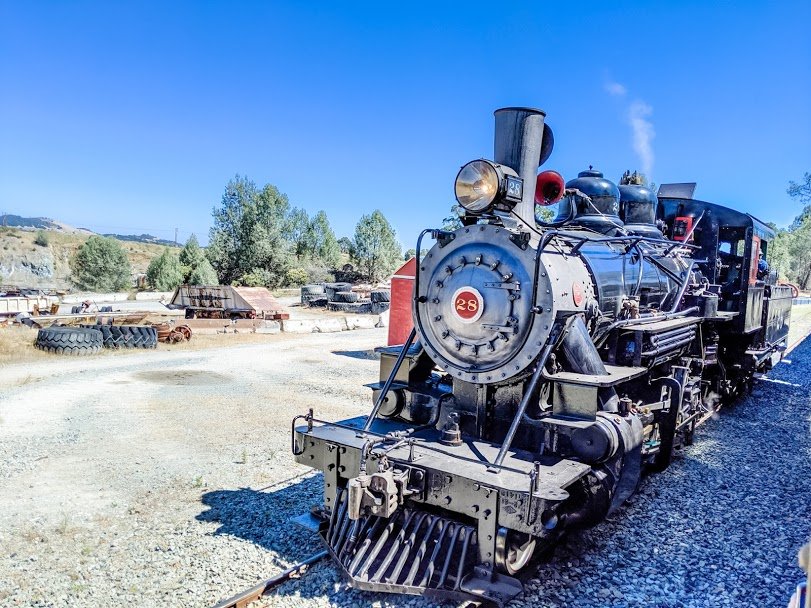 We bought tickets online in advance and ended up on the last steam train ride of the day. So we were lucky enough to see the previous train come into station before it was our turn.

There’s nothing like the theatrics of a steam train coming into station either. It’s that chug-chug-chugging that you remember from the movies interspersed with the super-loud mid-pitched whistle. 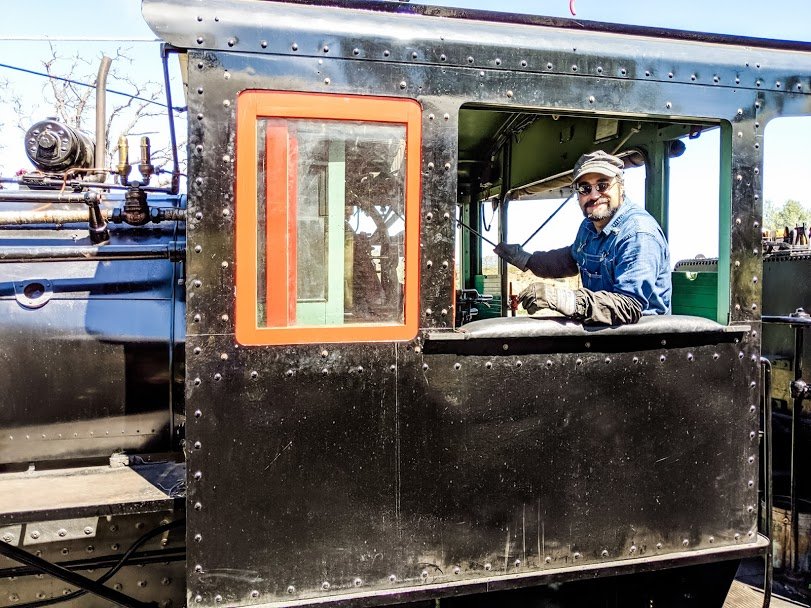 Volunteers dressed in period costume line the station to wave visitors farewell and welcome them back after the train ride, which really adds to the atmosphere.

Once you board the train, you begin a 6-mile journey that takes about 45-minutes. I never said that steam and diesel engine travel was fast, but it does mean that you get to enjoy California’s gold country and learn about the Mother Lode along the way. 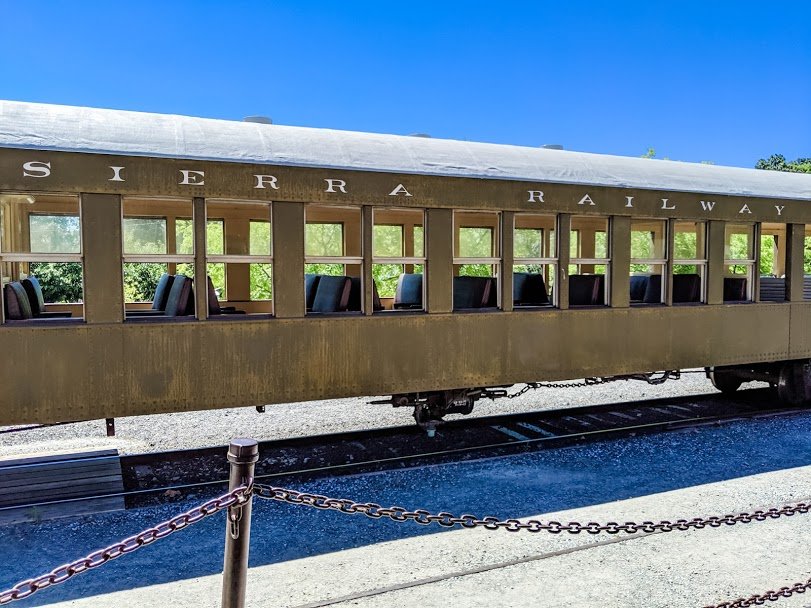 Once you chug out of the station and wave goodbye to the onlookers, you’ll get the chance to see the water tower from Petticoat Junction, which signals that you’re leaving Jamestown and heading into the wild west.

Our volunteer conductor gave us some history about how the railroad first came to the area, what it was used most for, a bit of film history and some stories about fictional historic characters such as Grizzly Adams. 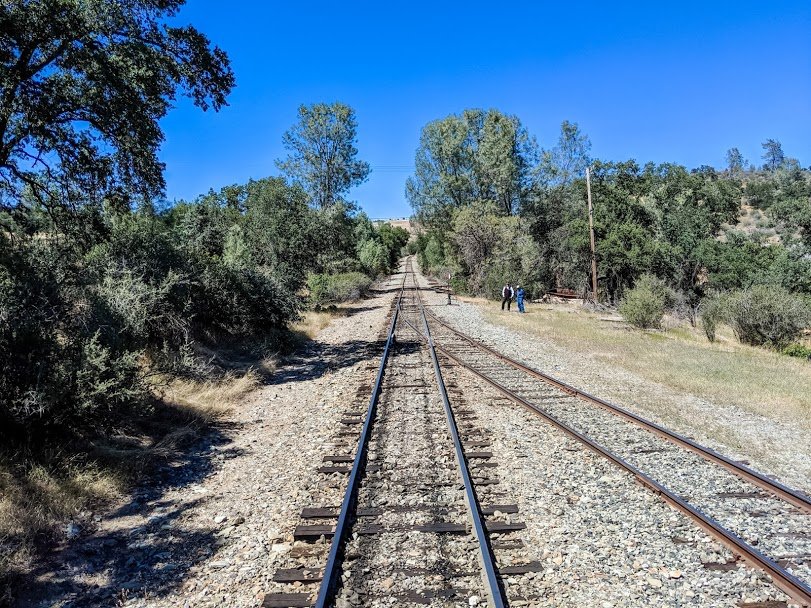 At the end of the line, you get to watch as the locomotive uncouples, drives past you and then reattaches to the other side of the train car, to head back to the station.

And you’ll learn about proper train signaling as you cross rail crossings. Two short toots of the horn, followed by one long toot is the universal sign that a train is coming up to the road you’re driving on.

We were lucky enough to watch as the train was re-stocked with oil and water, before it was carefully loaded onto the round house, spun, and headed to the shed for a good night’s rest. 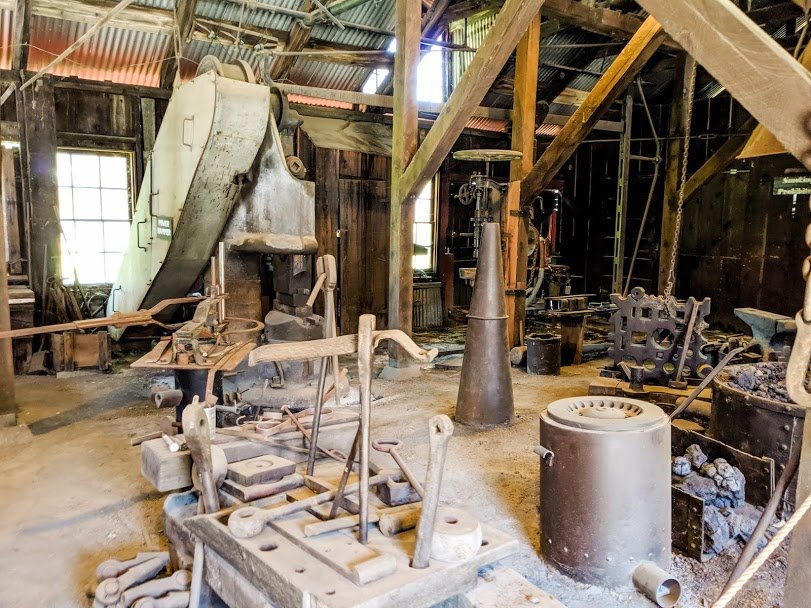 The real history of Railtown began back when it was known as the Sierra Railroad to serve the mining and then timber industries spread along the Mother Lode country in Northern California. The railroad first stretched from Oakdale to Jamestown, and its headquarters were located in Jamestown. 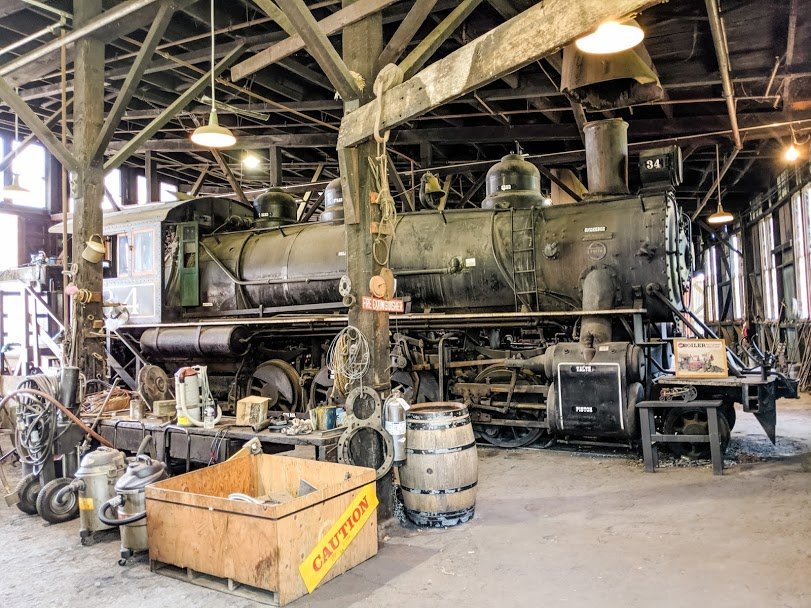 You’re probably wondering what the Mother Lode actually is. It’s the name given to places that hold a long line of gold deposits within hard rock.

It stretches from the northwest to the southeast in the Sierra Nevada of California and was first discovered back in the 1850s. Follow the rocks and, in theory, you’ll follow that Mother Lode to riches. It didn’t quite work that way for all miners though. 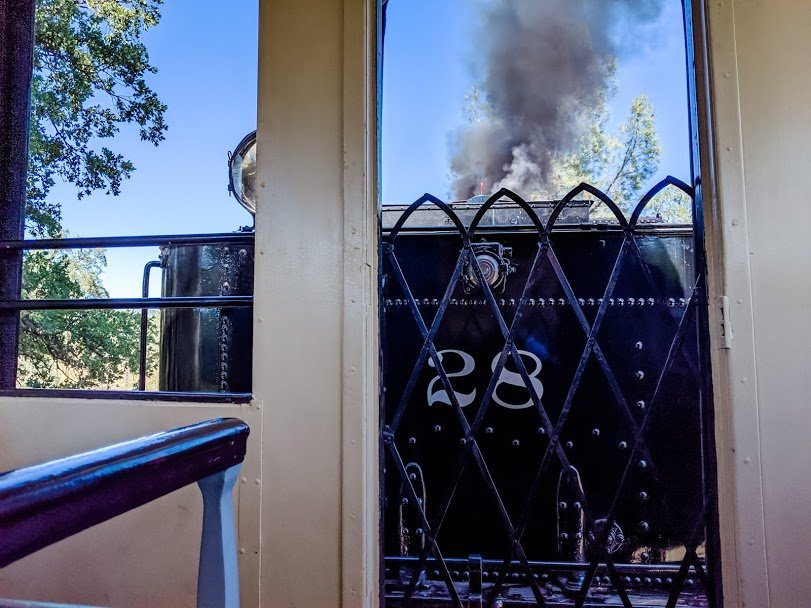 So the railroad was built by the mining companies to, but it was really expanded by the lumbar companies once the gold rush began to dwindle. Wood products were the number one item hauled on the Sierra Railroad since 1900.

During the holiday season, Railtown volunteers have a little chat with Santa Claus and borrow the Polar Express for a trip to the North Pole. Get your kids in their PJ’s and head out for an hour-long rain ride to the North Pole (it’s amazing how close the North Pole is at Christmas time).

The evening rides allow you to take a journey with the characters from the Polar Express, and meet Santa himself once you reach his realm. Each passenger gets a silver sleigh bell from jolly old Saint Nick, before you ride back to Jamestown enjoying hot chocolate and some holiday cookies.

This experience obviously sells out quickly, and the best way of almost guaranteeing a ticket is to becoming a member of the State Historical Park, and get early access to purchasing these tickets, which become available in October.

Jamestown’s Railtown is just 130 miles east of San Francisco, making it about two and a half hour’s drive away. 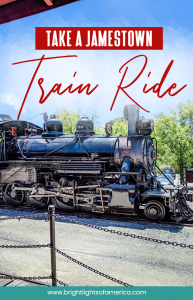 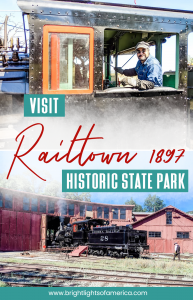