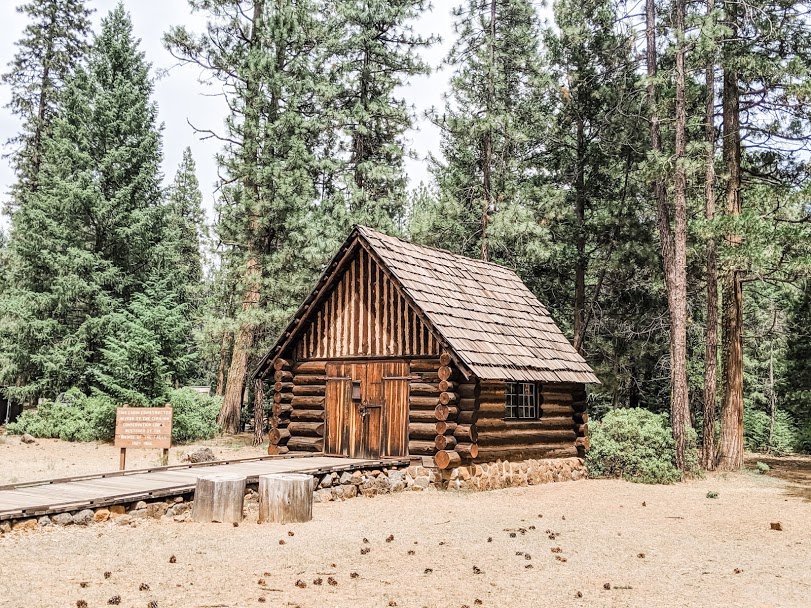 You need to visit Burney Falls, California for so many different reasons that will appeal to almost everyone who is looking for a weekend getaway or a stop on a road trip in the state’s north.

The problem with this fact, is that everyone is trying to get to the falls, which can make for a crush and even closure of the state park during peak season.

The falls are the star attraction within McArthur-Burney Falls Memorial State Park, which is open for camping and is a stop along the famous Pacific Crest Trail (PCT). For those who aren’t familiar, the PCT is a 4,265-kilometre trail that runs from Mexico to Canada.

Hikers choose to traverse as much of the trail as they’d like, as it is broken up into sections that spans California, Oregon and Washington through the Sierra Nevada. 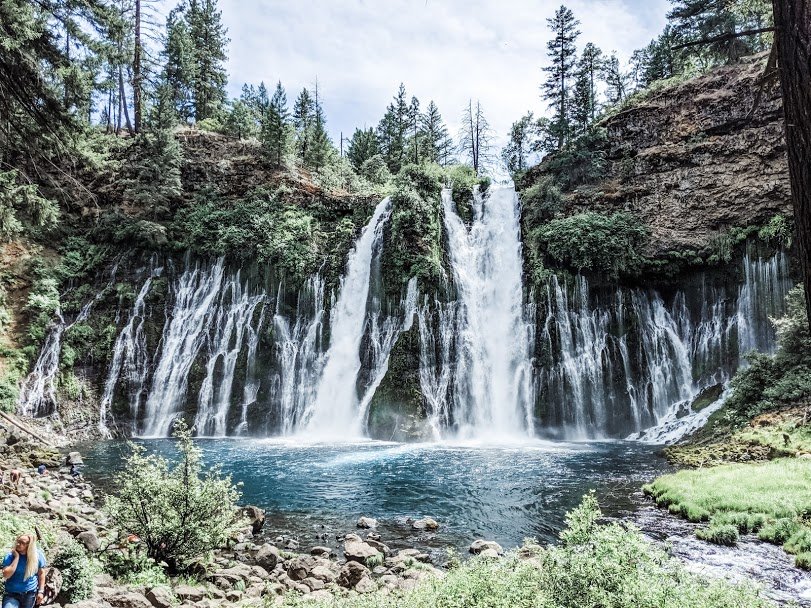 Those who make it through to Section O, will take in the breathtaking views of Burney Falls. However, you don’t need to be a die-hard hiker, or even do much walking at all to be able to see the cascading waterfalls.

The McArthur-Burney Falls Memorial State Park is located off Highway 89 in California’s north, about 10 kilometres north of the town of Burney, an hour north-east of Redding, and four-and-a-half hours’ drive north-east of San Francisco.

The state park is the second oldest in California and will celebrate its centenary in 2020. The first parcel of land granted to California to be designated a park was Yosemite, which was later returned to the Federal Government, to become a national park.

The mantle of oldest continuous state park in California however, goes to Big Basin Redwoods State Park, which was founded in 1902. 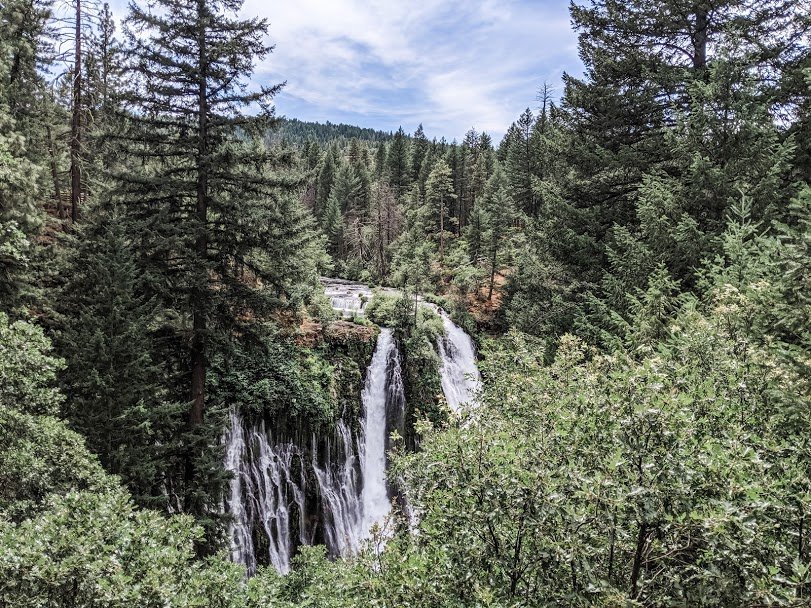 But back to the story of McArthur-Burney Falls Memorial State Park. It was named for a pioneer settler named Samuel Burney, who lived in the area in the 1850s. The waterfall and surrounding land was saved from development by the McArthur family by the McArthur Family, who purchased the property and gifted it to the state in the 1920s.

It is known to most as Burney Falls probably because it is less of a mouthful then the full park name.

What can we do while visiting McArthur-Burney Falls Memorial State Park?

Yes, Burney Falls is most popularly known for its spectacular waterfall, but that’s not all there is to do in the state park. You can book a campsite in the park, go fishing, partake in water sports or take advantage of the horseback riding facilities.

READ MORE:
Things to do in Redding, California
Powered by Inline Related Posts 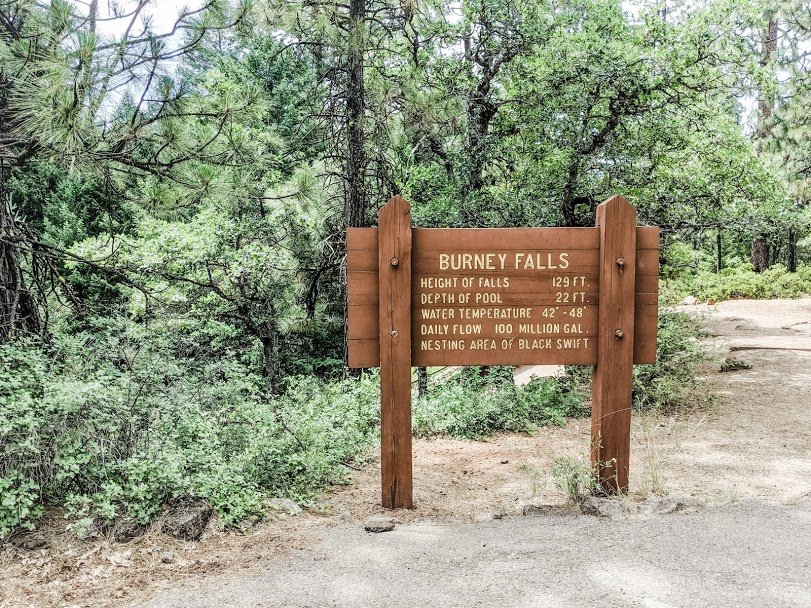 It wouldn’t be a state park without hiking trails, and McArthur-Burney Falls Memorial State Park offers 8 kilometres (five miles) of trails that showcase the evergreen forests of the area.

We mentioned the PCT in passing before, and the through hikers can use the McArthur-Burney Falls general store inside the park as a delivery mailing address to receive care packages, and replenish their supplies so you’ll see those hikers taking a well-deserved rest here. 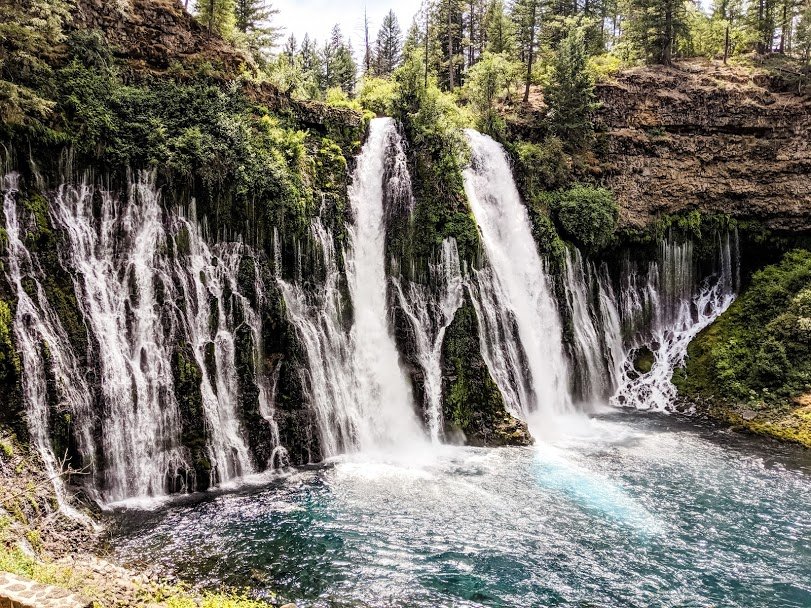 Day hikers can take advantage of the relatively short trails within the park. The longest trail is almost 5.5 kilometres (3.4 miles), but don’t be fooled, what they lack in length they make up for in elevation.

As mentioned earlier, Burney Falls receives a lot of visitors between April and October, but it is especially packed on weekends during the summer months and on public holidays.

On these days it isn’t uncommon for the entrance to be closed until the park empties a little. The state park website suggests returning after 4pm if you arrive to find the entrance closed earlier in the day.

We found that the best time to visit Burney Falls was mid-week, just before summer properly hit. We visited on a Tuesday in June and while the parking spaces were fairly limited even then, the park was by no means full at all.

Should we visit Burney Falls? 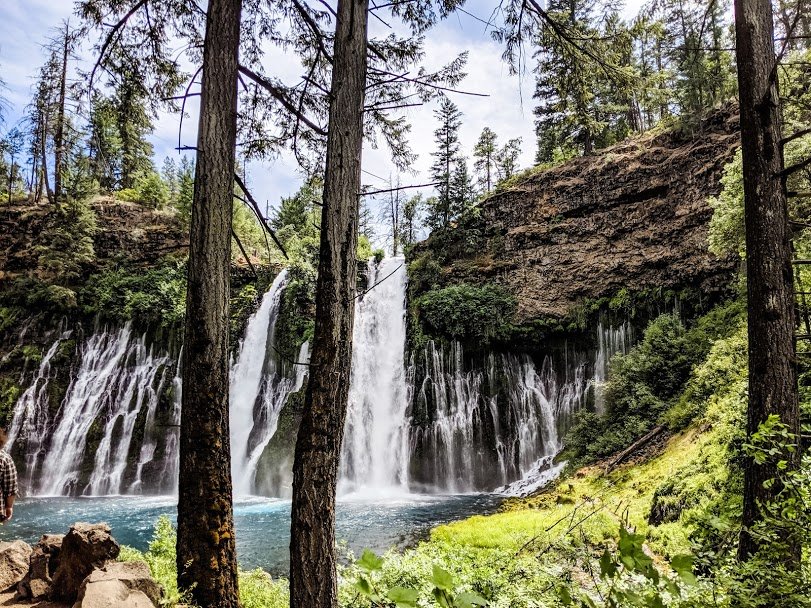 This is where I’ll let the pictures do the talking. While planning our Northern California road trip, we were hemming and hawing a little about cutting our drive through Lassen National Forest short, to fit in a trip to Burney Falls. We are so glad that we made the decision to fit the falls in.

A Bit of Trivia: The area behind Burney Falls is one of the few known nesting sites of the Black Swift, which likes to nest on high cliff faces near to water.

The 39 metre (129ft) waterfall originates from underground springs that feed Burney Creek. Below Burney Falls, the water runs into Lake Britton, which is a great little swimming spot. The water flows at 4.4 metres cubed each second, or 100 million gallons every day. Just imagine the sound of all of that water crashing around you.

If you’re brave enough for go for a little dip in the basin at the foot of the falls, be prepared for a chilly 5 degree Celsius (42f) dip in the 6.7 metre (22ft) pool. May I suggest not staying in for too long? But it’s definitely a refreshing end to a sweaty hike! 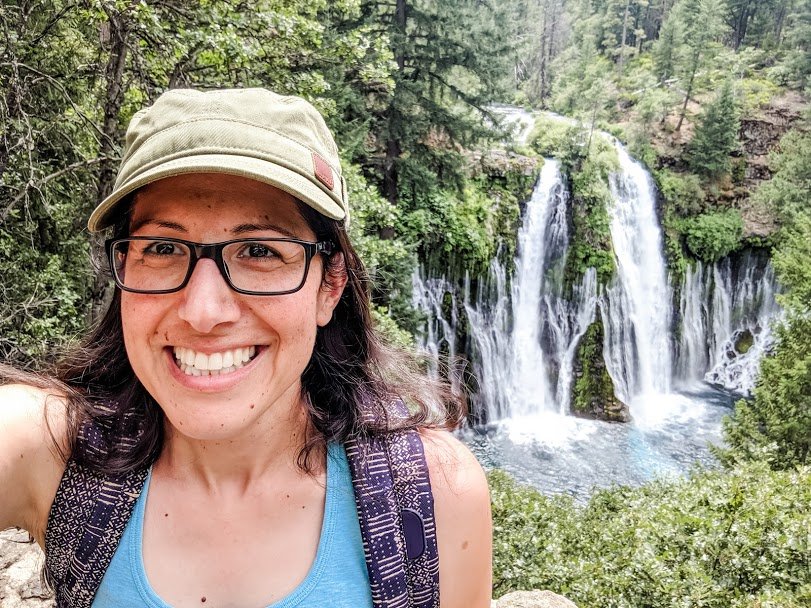 The falls actually began life about three million years ago, when it stood more than a mile downstream from where it is today.

The sheer force of the water gushing over the falls has eroded the softer rock and pushed the falls back to its current location. The erosion has slowed since the water is now flowing over ancient river gravels that is harder than the diatomite rock that covered it previously.

And the walls of the canyon are like history books themselves, recording the volcanic history of different lava flows over thousands of years.

Burney Falls has captivated the minds and hearts of people for thousands of years, especially the Pit River Indian Tribe, who hold it as a sacred place.

A portion of Lake Britton is open to park visitors for swimming and water sports, including boating. But be warned, it is a chilly 5 degrees (42f) for most of the swimming season. The rest of the lake is owned by PG&E, but another small portion is set aside for those who want to take advantage of some of the best bass and trout fishing in the area.

A Bit of Trivia: The railroad bridge scene from the movie Stand By Me (1986) was filmed just outside the McArthur-Burney Falls State Park, over Lake Britton.

If you’re lucky enough to go out on Lake Britton on a boat, you can explore the 9-mile lake and a few extra bits and pieces like the Pit River Dam. 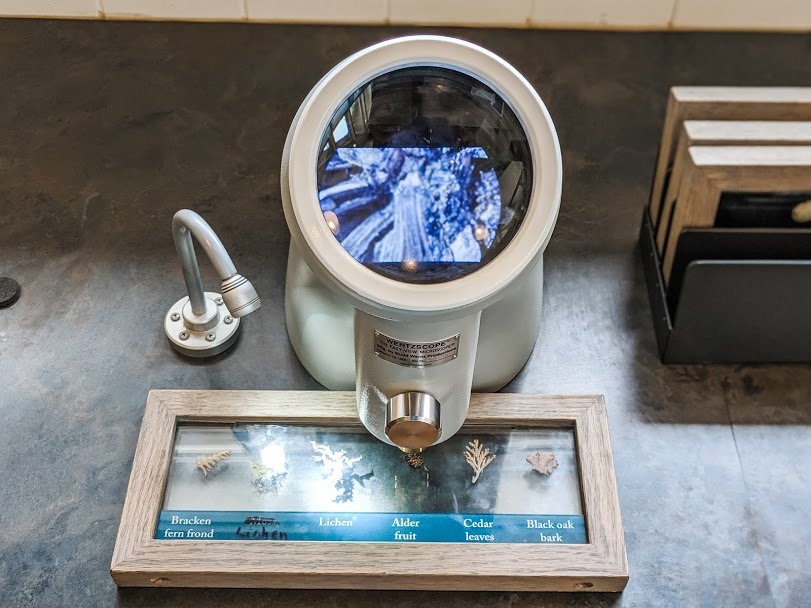 I always suggest stopping in at the visitor’s center of national and state parks, mostly because you’re bound to inadvertently learn something or other. The McArthur-Burney Falls visitor’s center is especially great for kids because it has interactive displays and even as a few microscopes and specimens for them to play with.

You can hire a boat, kayak, or canoe at the park, to explore Lake Britton. There is also a General Store on site, so you can purchase any important items you may have forgotten. 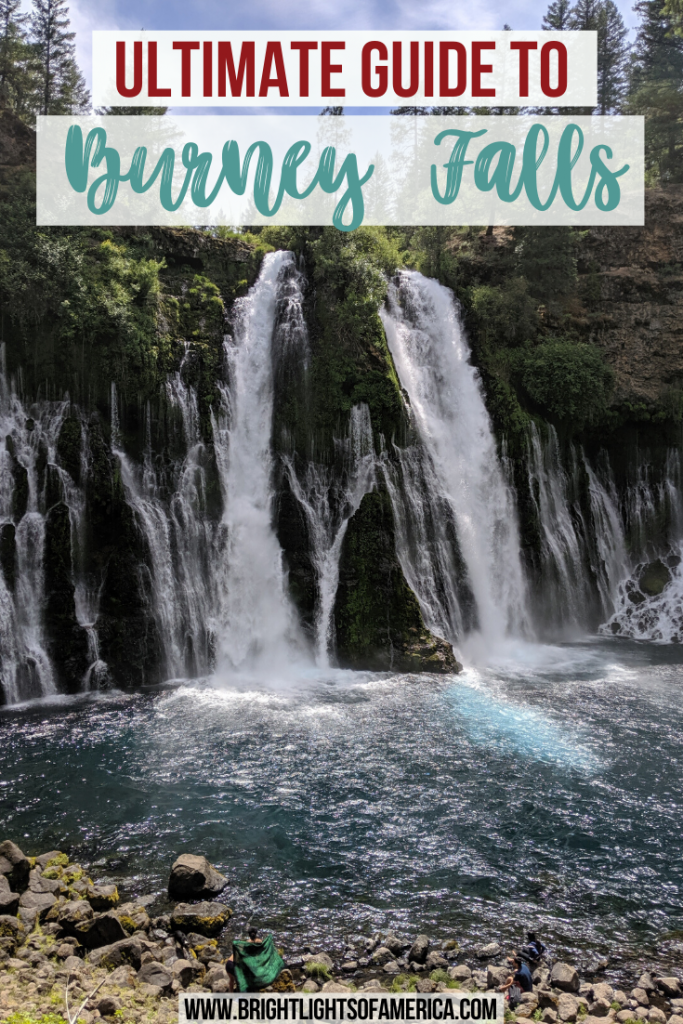