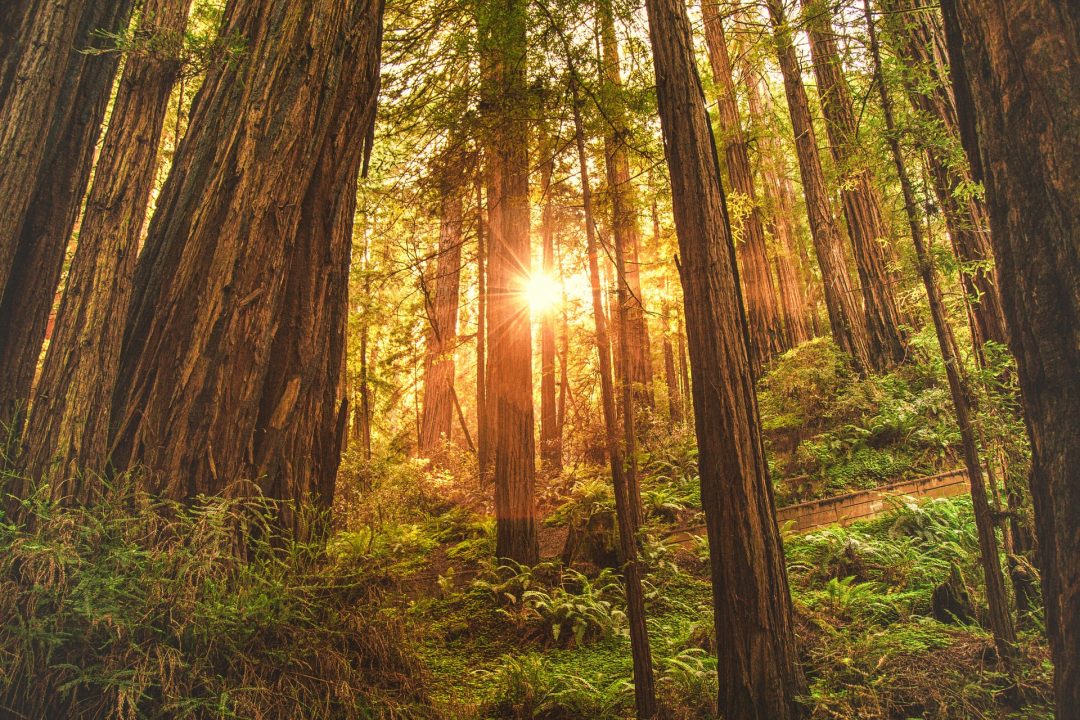 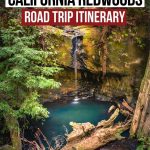 When it comes to majestic trees, California has you covered. The Giant Redwoods of California will tower over you, make you feel tiny, and remind you that humans are on earth for a very short while.

They are a major draw card in for both tourists visiting the state, and locals who want to enjoy nature, go out for a hike, or just switch off from the outside world for a while.

This Giant Redwoods California guide covers the northern section of the state, and gives you a peek into the best places to view these trees. 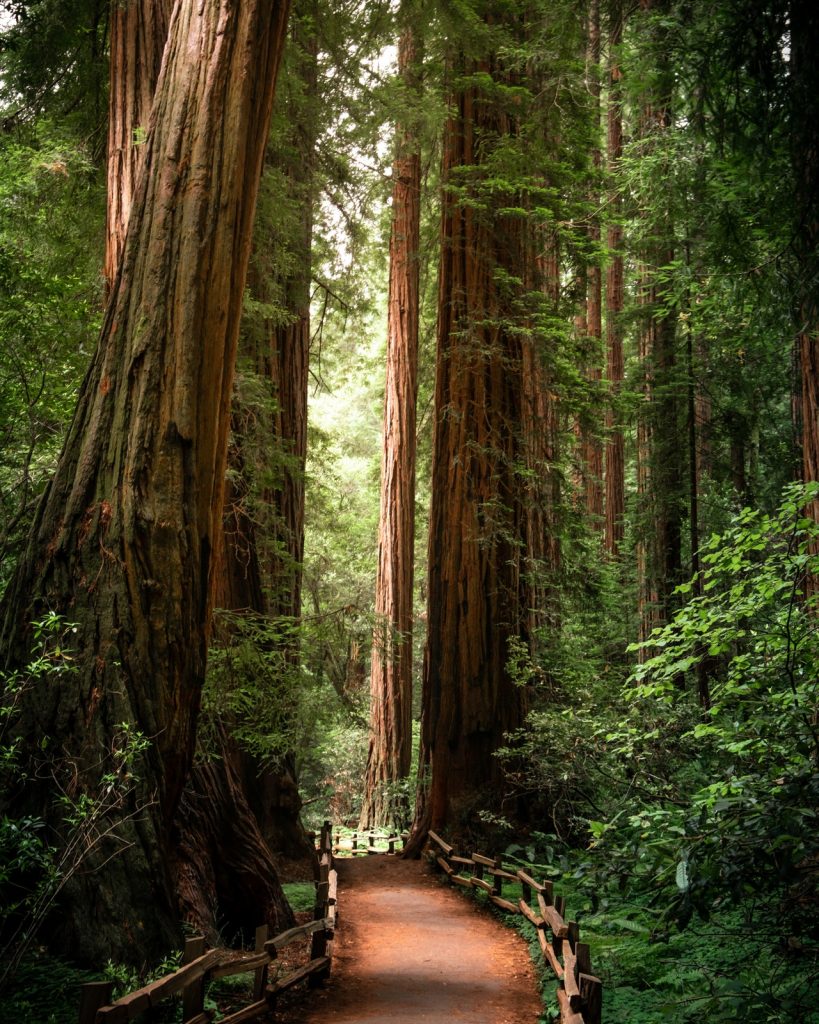 You can’t visit California without spending some time in a Redwood Grove.

Redwood trees have been on earth almost since the first dinosaur stepped onto land, shook the water off its back, and went hunting. So maybe that’s not quite how it happened, but you get the picture.

The species of giant redwoods that we see today have been around for almost 240 million years, well before any humans, and some of the oldest individual trees have been growing for at least 2,000 years. 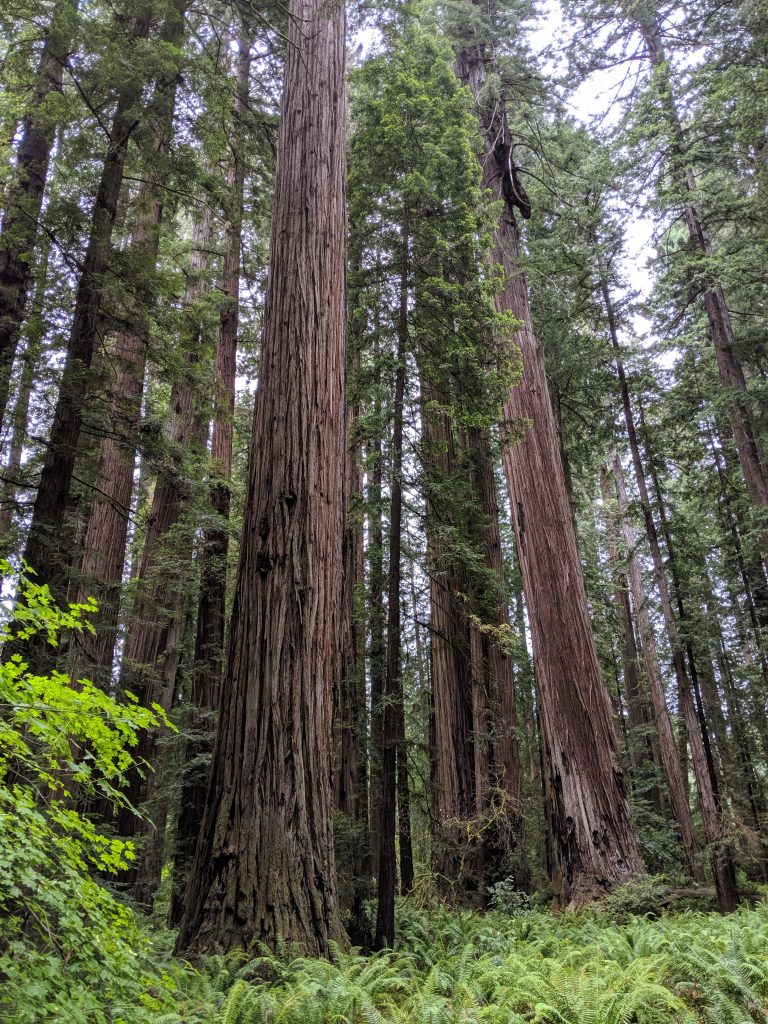 Why are they so impressive to gaze up at? Coastal Redwoods, the kind found in California Redwood groves, are the tallest trees in the world.

Some of the taller ones hit 109 metres (360 feet), so it’s unsurprising that they need a lot of water to survive.

The trees have evolved to be able to suck in water vapor or fog through their needles, allowing water to get to the very top of the tree without it having to expend energy getting it all the way there from its root system. 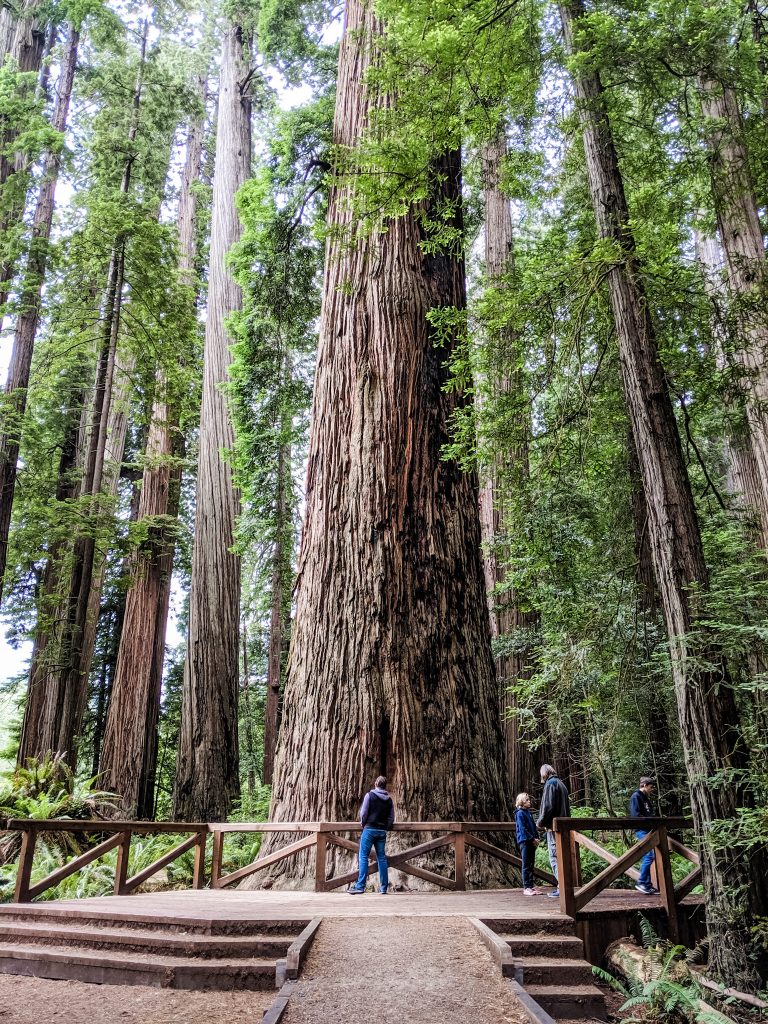 Close to the California-Oregon border, you’ll find Jedediah Smith Redwoods State Park. It was named for Jedediah Strong Smith, who was a frontiersman, hunter, and explorer of the Rocky Mountains and the greater American west in the 1800s.

TIP: Del Norte Coast Redwoods, Jedediah Smith Redwoods, and Prairie Creek Redwoods state parks are the only California parks that allow you to use the Federal Access Pass discount.

This state park is home to seven per cent of the old-growth redwood trees left in the world. This is where you will experience some of the oldest trees left on the planet. 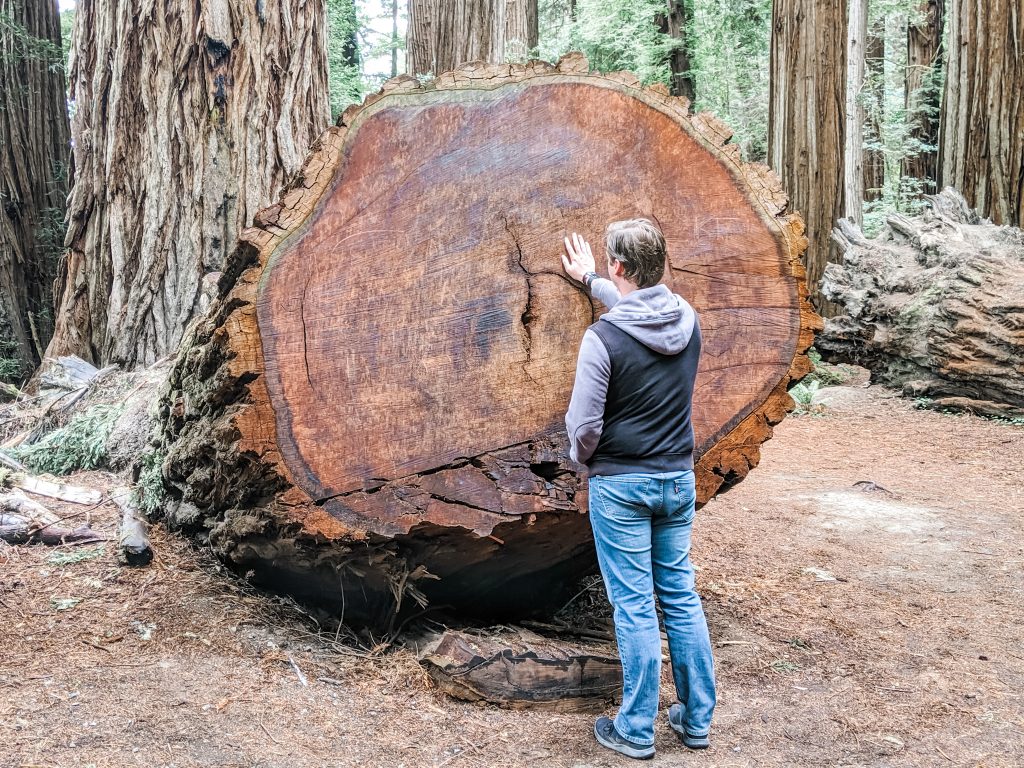 Count the rings of a coastal redwood’s trunk to find out how old it is.

If you’re only able to stay for a quick visit, like we were, we highly recommend visiting Stout Grove. This area doesn’t have the oldest trees, but it is a short 0.6 mile hike that offers some beautiful views of the Redwoods. 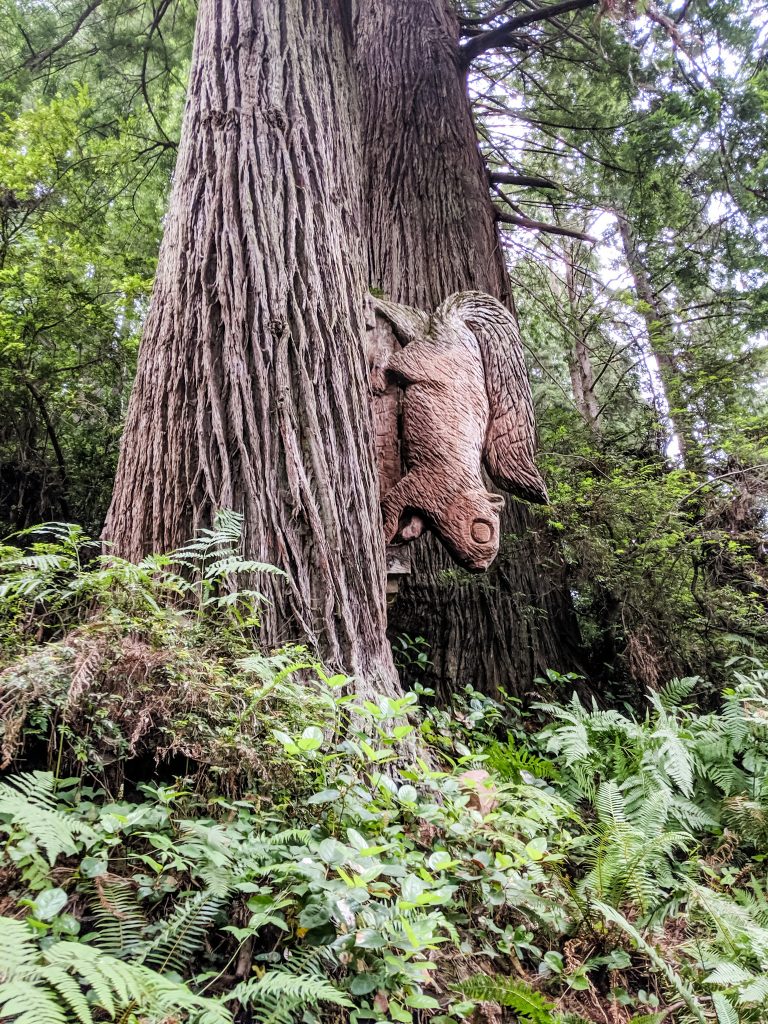 Trees of Mystery in Klamath, gives you every possible view of Giant Redwoods.

This park is one of the best places to see giant redwoods from every angle possible.

Situated in the middle of Redwood National and State Parks, Trees of Mystery allows you to catch a gondola ride up into canopy of the Redwood forest. 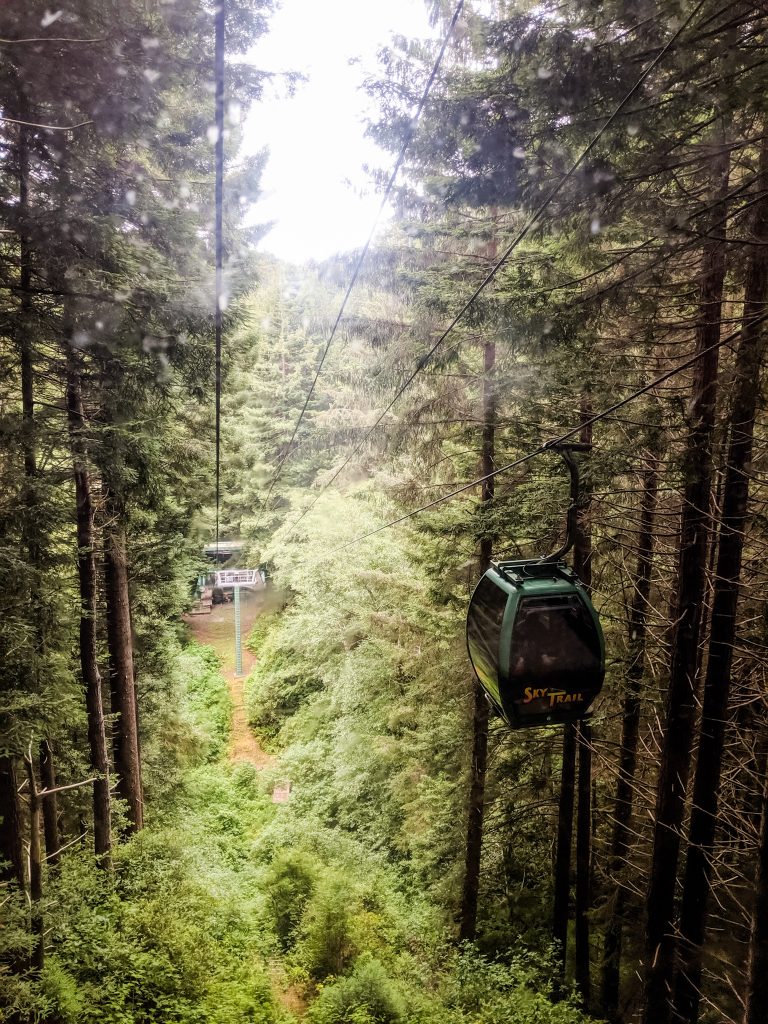 See the Redwood forest from above on the Trees of Mystery Skytrail.

You can also hike the wilderness trail, marvel at the gigantic talking statue of Paul Bunyan (who will literally hold a conversation with you), and follow the Trail of Tall Tales, which shows the myths of the logger carved in wood. 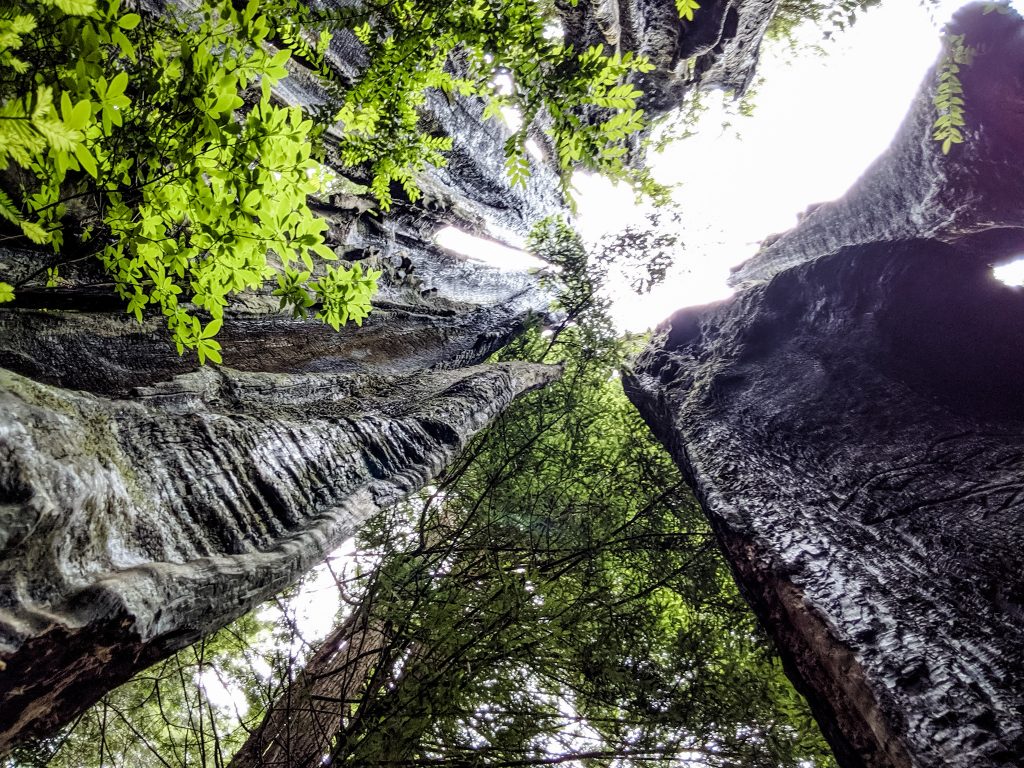 The Towering Inferno tree was struck by lightning in 1996. It burned from the inside, but the outer, more fire-resistant shell was left.

You can get married at Cathedral Grove, within the Trees of Mystery Park. Many couples tie the knot in front of a cluster of nine Giant Redwoods that form a semi-circle. A thousand years ago, one tree died in that spot, and these trees grew out of it.

There are a couple of “drive-through” trees on the Northern California coast, and the Klamath Tour-Thru tree is one man-made example.

Just outside of Redwood National Park you’ll find the Klamath Tour-Thru Tree, which was carved out of a Redwood back in 1976.

Today it is one of the youngest “drive-through” trees, and costs $5 for the privilege of lining up behind a host of other vehicles and waiting to drive through.

This one is one of the better trees to drive through if you have a larger car or truck. The tree is still very much alive as well. 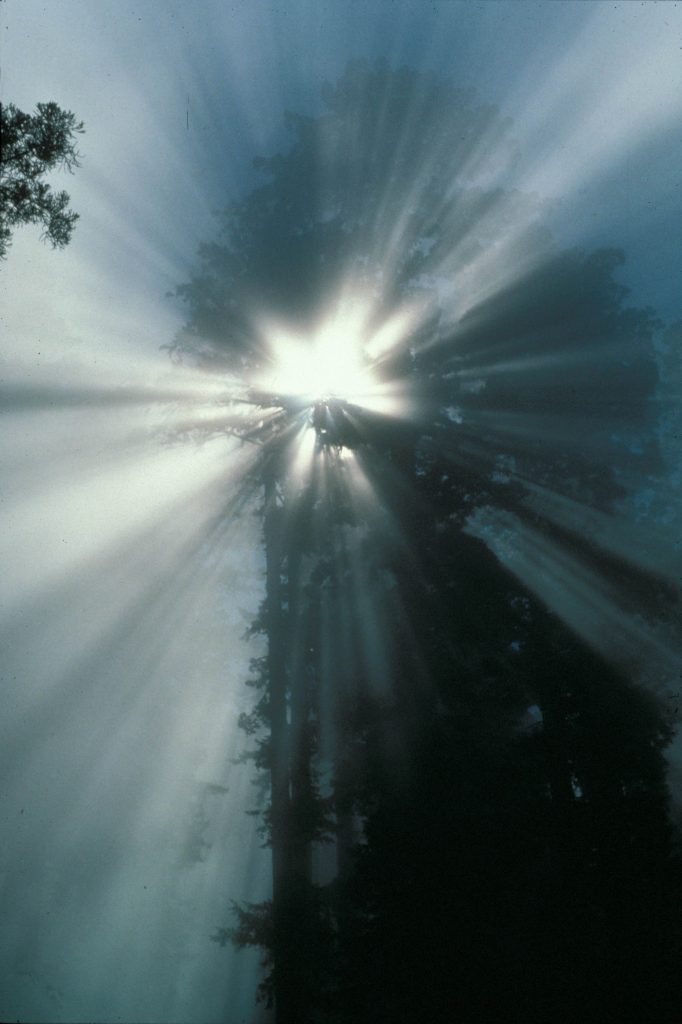 The Redwood National and State Parks are the collective names for protected land from Fort Bragg in California, all the way up to Josephine County in Oregon. Together, they are listed as a World Heritage Site.

As you drive Highway 101 in this region of California and Oregon, you’ll notice that the climate, vegetation, and forests change character.

They move through a concentration of California oak trees, to Douglas Firs, and up to California Redwoods.

And in 1994 the National Park Service came to an agreement with the state service to manage all four parks together.

The Avenue of the Giants

This 31-mile scenic drive of Old Highway 101, takes you through some of the most breathtaking tree-lined drives you’ll ever encounter.

You will be surrounded by 51,222 acres of Redwood Groves on your drive, so make sure you use the turnouts to swap drivers. No one will want to miss their chance to have an unimpeded view of these beautiful Giant Redwoods.

Details: The Avenue of the Giants begins in Humboldt Redwoods State Park in Weot, and finishes at Myer’s Flat. 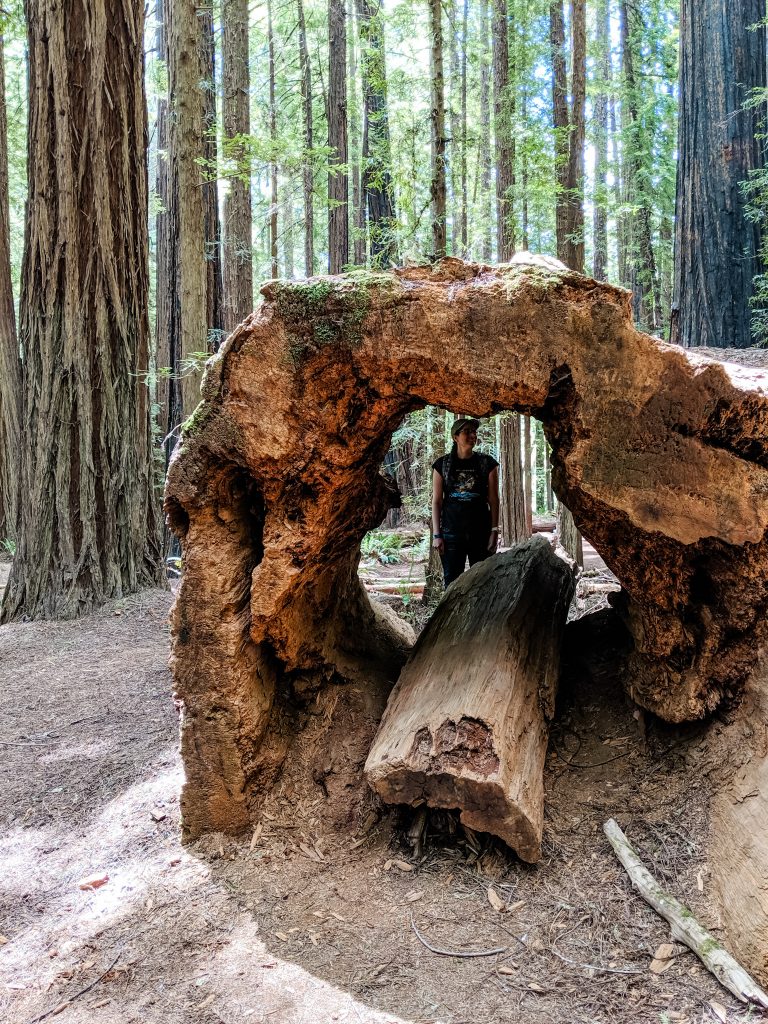 The Gould Grove Nature Loop Trail is a great place to stop on your way through the Avenue of the Giants.

On your way through the Avenue of the Giants, you’ll come to the Gould Grove Nature Loop Trail and visitor’s center.

The loop is ultra-short at 0.62 of a mile and only 18ft of elevation change, but it’s a good excuse to get out, stretch your legs, and check out the visitor’s center. 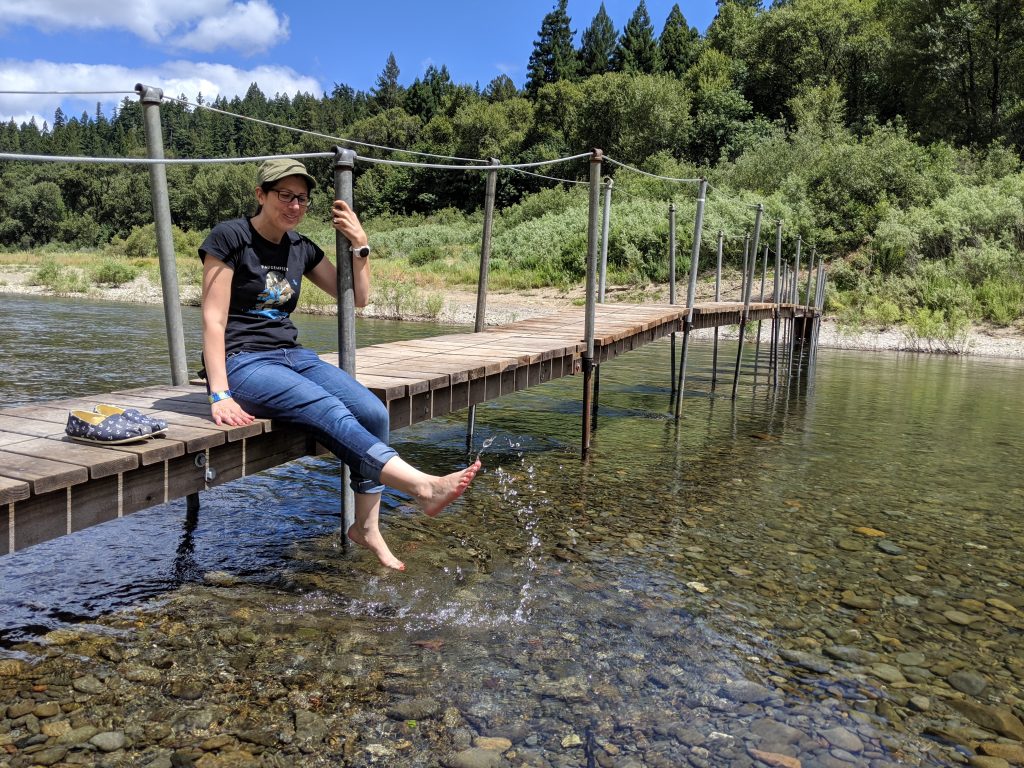 Even if the hike hasn’t been particularly strenuous, it’s always nice to dip your toes in the river.

This trail is covered with Redwood Sorrel, ferns, fallen Redwoods, and you can branch off to visit the South Fork Eel River like we did.

Details: Directly across the road from the Visitor Center, Avenue of the Giants mile marker 16.5. 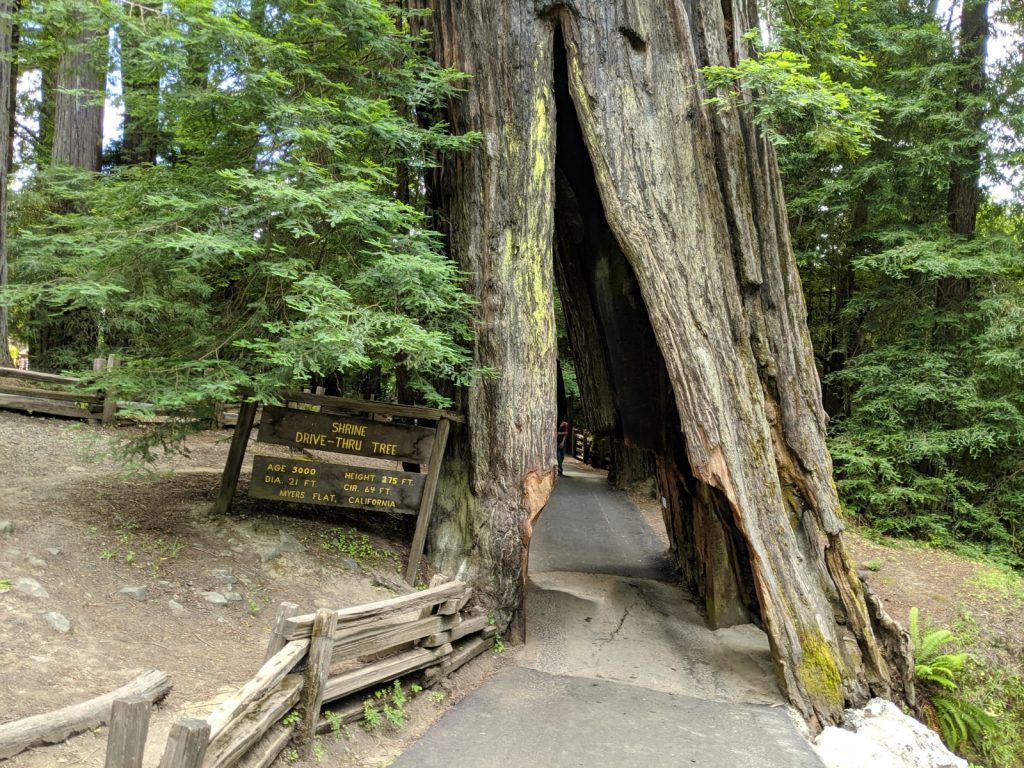 The clearance for your car is just 7ft by 7ft, so enter at your own risk!

The Shrine Drive-Through Tree is located on the Avenue of the Giants and is a naturally occurring tree. Unlike the Klamath tree, this one was not cut to fit vehicles.

It is thought that the Shrine Tree was hollowed out by a lightening strike which caused part of the interior of the tree to burn through.

It was spared a second time by loggers who didn’t bother cutting it down since they figured it wouldn’t have very much quality wood to sell. 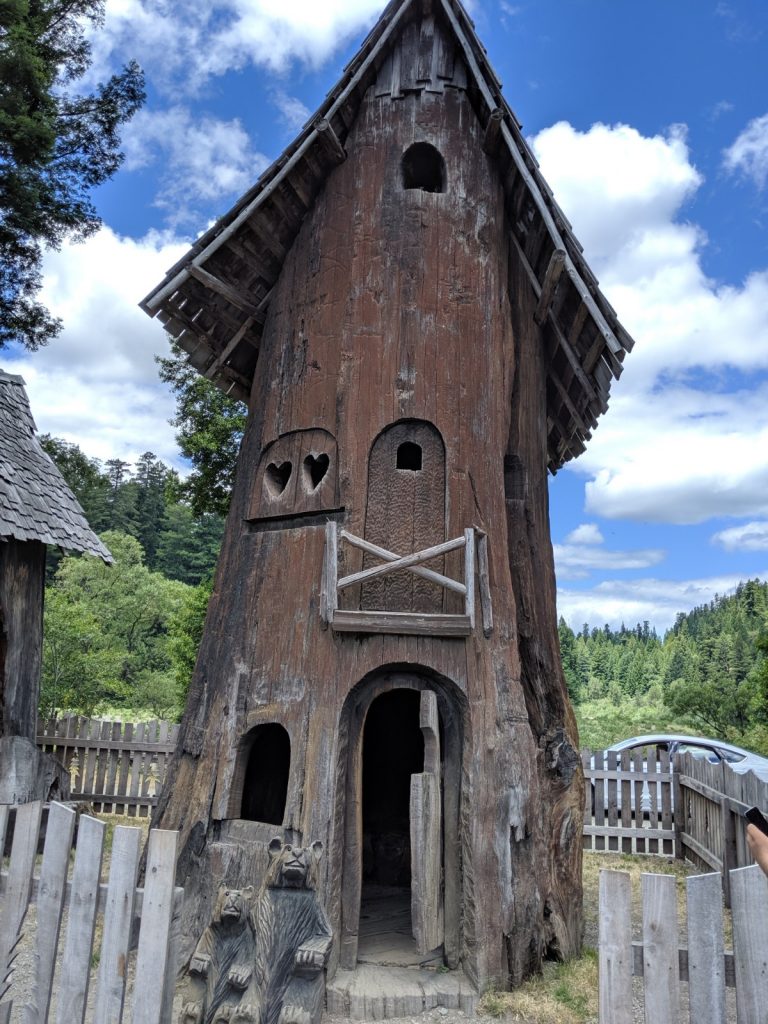 It costs $10 to enter the Shrine Drive-Through Tree area, where there are also little houses built from fallen Redwoods for children to play in. 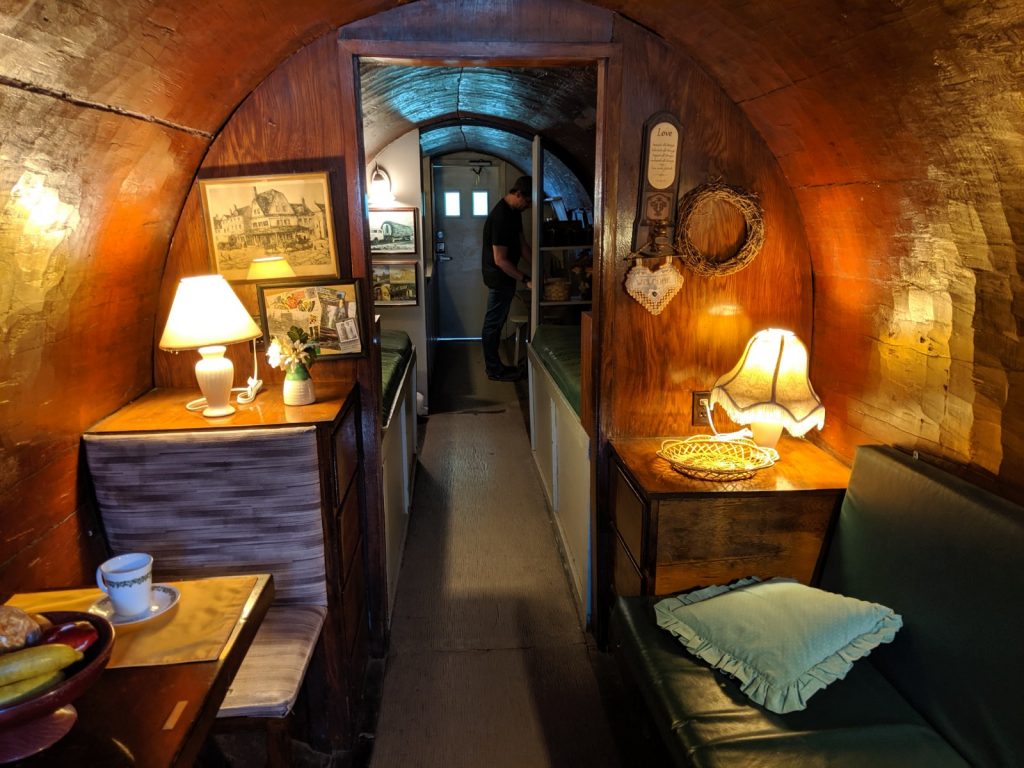 The One-Log House is a plain old tourist “trap” that I wouldn’t have missed for the world.

Yes, it’s a gift shop, and a café. Oh and there’s a dispensary next door, but the one thing that made me bring the car to a screeching halt was the One-Log House. 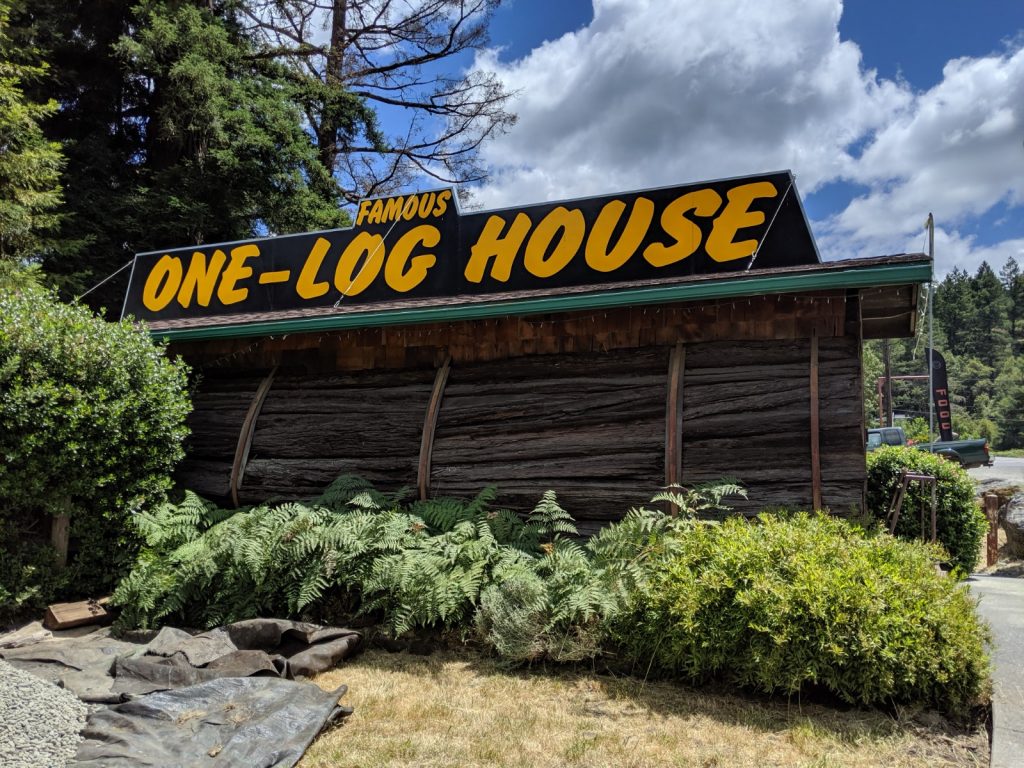 But if you ever need to move it, it’s already on wheels.

Built in 1946 from part of a 2,100-year-old Redwood tree, One-Log House took eight months to hollow out and install “rooms” into. 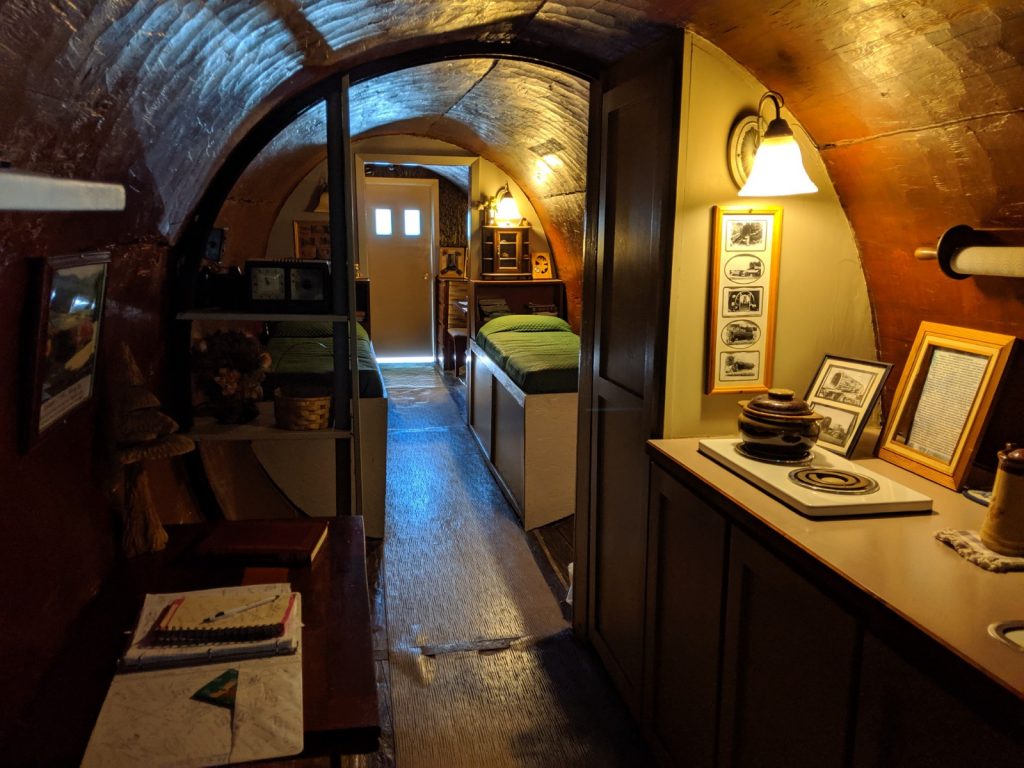 It actually toured the United States on the back of a truck for a few years, before settling in Garberville.

Hendy Woods State Park is the place to go for a stroll amongst the Redwoods before enjoying a sip of wine.

Located in the Anderson Valley wine region, the state park has two groves of Redwood trees that are up to 300 feet tall and around 1,000 years old.

It even has an accessible Discovery Trail for wheelchairs. The best thing about Hendy is that it is less foggy than other Redwood parks, so if you’re solely there for the photos, there’s hardly any danger of them being spoiled by too much fog!

Details: Eight miles northwest of Boonville, and a half-mile south of Highway 128 on Philo-Greenwood Road. 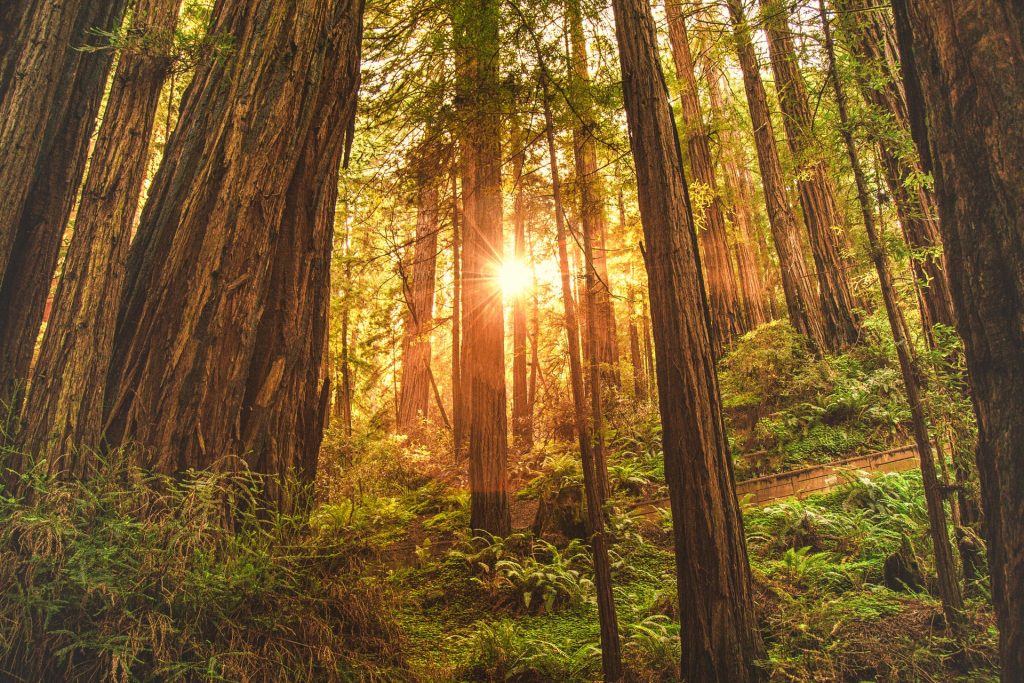 Arguably one of the more popular spots to experience the Giant Redwoods of California, Muir Woods is usually very busy.

It’s just a 50 minute drive from San Francisco, but it feels like it’s a world away from the hustle and bustle of city life. 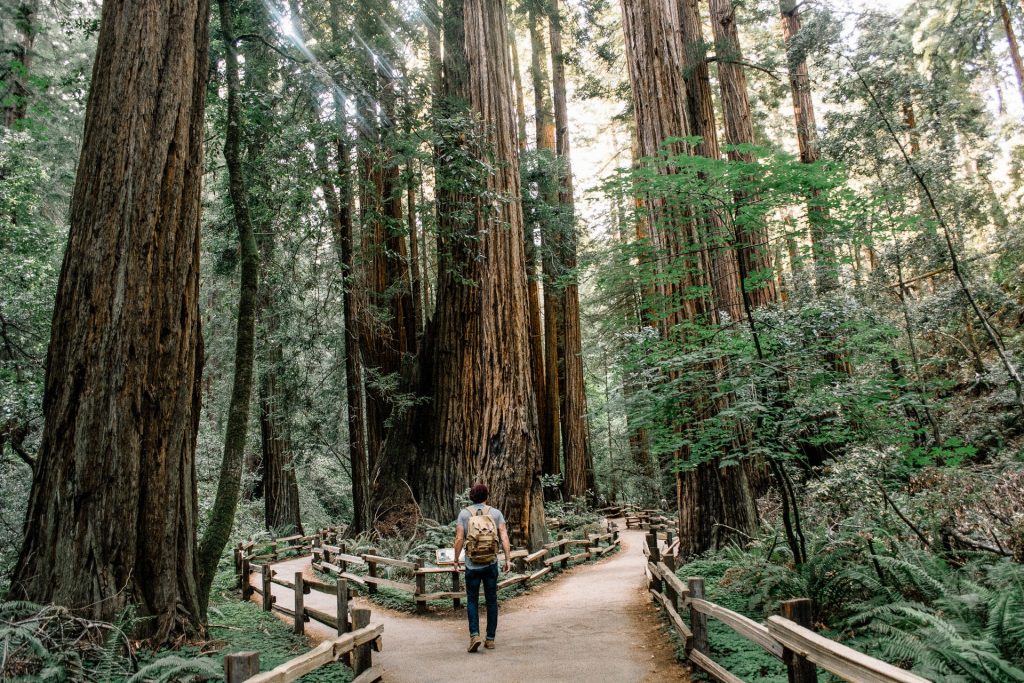 Muir Woods has plenty of board walk so that visitors don’t disturb the tree roots beneath.

There are almost 10km (6 miles) of trails within Muir Woods National Monument. And for those who are feeling fit and confident, there are more trails heading out to the surrounding Mt Tamalpais State Park. 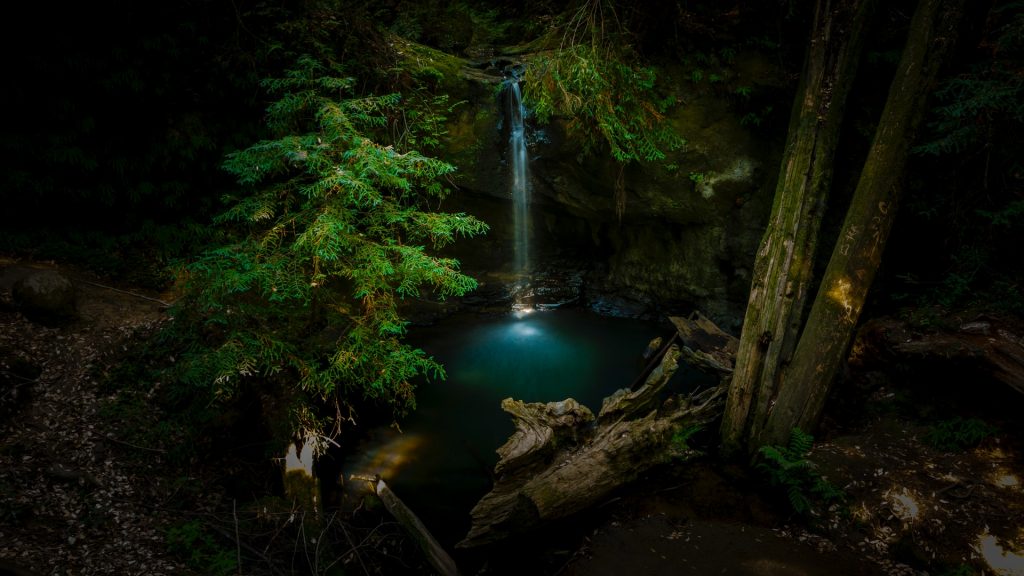 Obviously the Redwoods aren’t the only beauty here.

This is California’s oldest state park – it has been in use since 1902. And it’s easy to see why. Big Basin Redwoods State Park is situated right in the Santa Cruz Mountains.

While the Redwoods tower above the mountains, visitors can get a beautiful view of the Pacific Ocean, waterfalls like the one above, and be right on Santa Cruz’s doorstep. 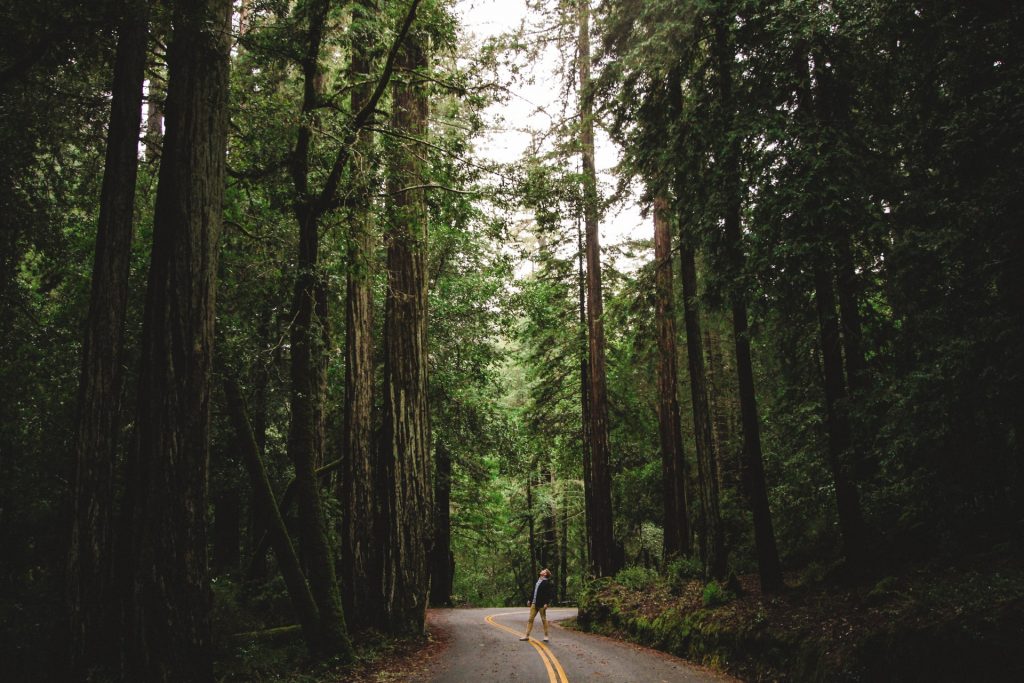 The state park hosts the largest continuous stand of giant Redwoods south of San Francisco, and has more than 80 miles of trails. 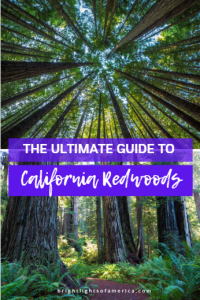 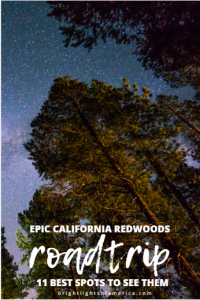