Where to eat in Ottawa 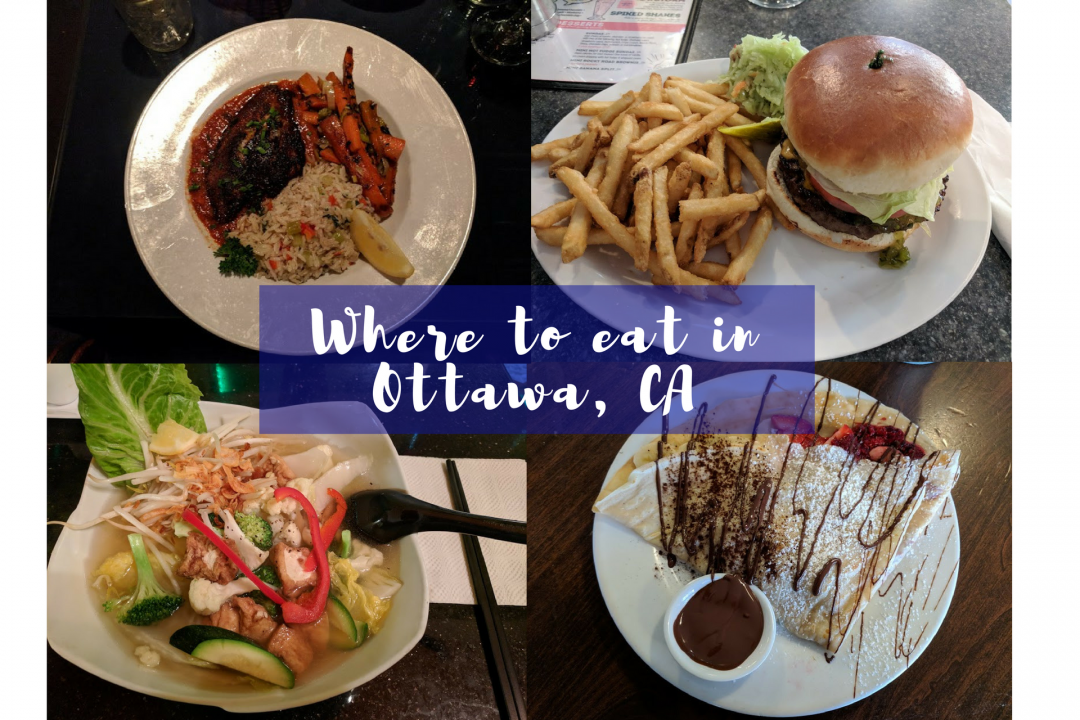 When you’re looking at where to eat in Ottawa, it can be tough to narrow the list down. There are a range of restaurants, cafes and great little kiosks where you can grab a quick bite or while away a few hours with friends.

So while deciding where to eat in Ottawa might seem a little overwhelming if your eyes are bigger than your stomach like mine, I’ve put together a list of my favourites for you.

There’s a mix of desserts and cafe-fare interspersed with a few restaurants of varying cuisines. My only disappointment is that I didn’t get time to try the Mediterranean food while I was there.

Almost everywhere you look, you’ll see a Mediterranean restaurant. You should probably try one out and let me know how it is!

LOOKING FOR THINGS TO DO IN OTTAWA? HERE’S 10 GREAT THINGS TO SEE & DO

With a name like that, how could you not? Beavertails Pastry is a Canadian institution that’s been serving pastry-wrapped goodies since 1978. 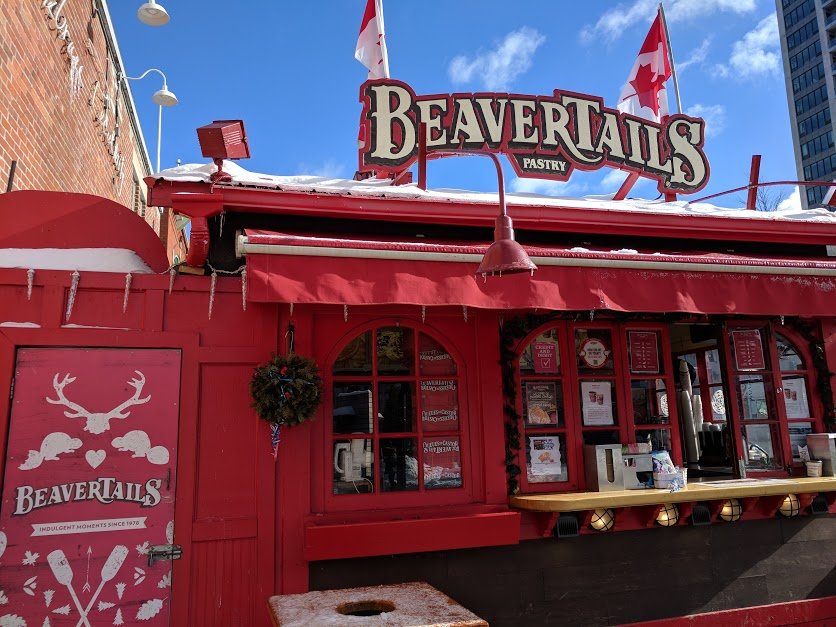 If you stop by the Byward Market kiosk, like I did, you’ll be following in the steps of former US president Barack Obama, who was enticed by the sugary treats during his first trip to Canada in 2009.

But there are kiosks all over the place, and it’s probably a great energising snack to grab while you’re skating on the Rideau Canal in winter.

So, what can you get? The signature “dish” is a hand-stretched whole wheat pastry topped with pretty much anything you can think of. I went simple with the cinnamon sugar version because my dentist would kill me otherwise. 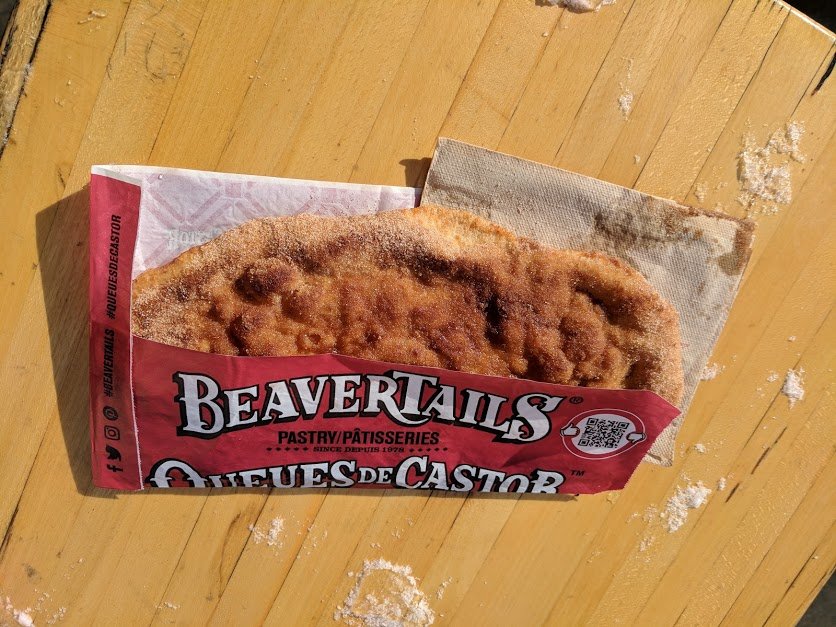 Mmm, cinnamon sugary goodness. Pay no attention to the snow on the table.

But you can get hazlenut spread, banana, Reece’s Pieces, marshmallows, apples, and a bunch more.

Cacao 70: For the Sweet Tooth

Ottawa doesn’t mess around when it comes to winter. It gets properly cold and snowy – the perfect weather for hot chocolate.And if decadence is you’re thing, Cacao 70 is the place to get it. The cafe’s American-Style hot chocolate is made with melted chocolate from its own factory. 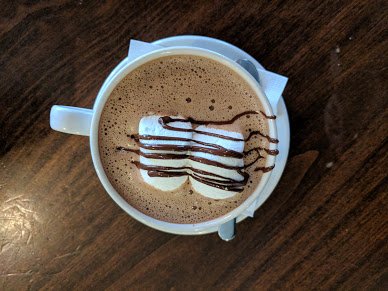 With two marshmallows floating like icebergs in a river of deliciousness, this hot chocolate is one to be savoured. I had to stop myself from going back again for more.

And if you’re visiting Ottawa in the summer, don’t think for a second that you can skip Cacao 70. You might be brave enough to try the Crazy to S’more milkshake, made with dark chocolate and topped with grilled marshmallows, brownie bites, graham crackers and chocolate covered cereal. 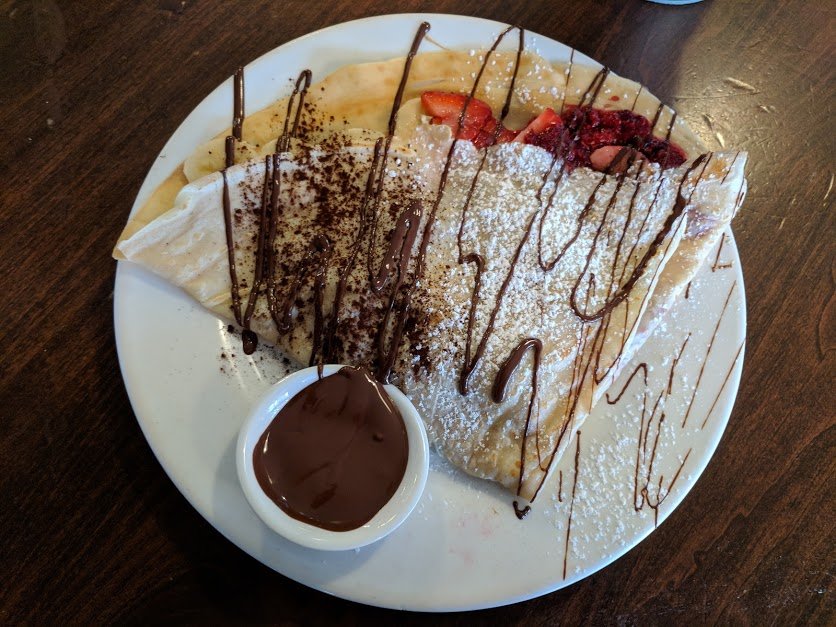 It’s got fruit in it! It’s practically find to eat for breakfast!

Summer or winter, I highly recommend the cocao and fruit crepe. Go for it, it’s got fruit in it! The crepe is paper-thin and the mix of strawberries, rasberries and banana dipped in chocolate is divine. Heaven in a crepe!

Sometimes you just need a bit of comfort food after a long day of exploring a new city, and The Aulde Dubliner is a great place to get it in Ottawa. 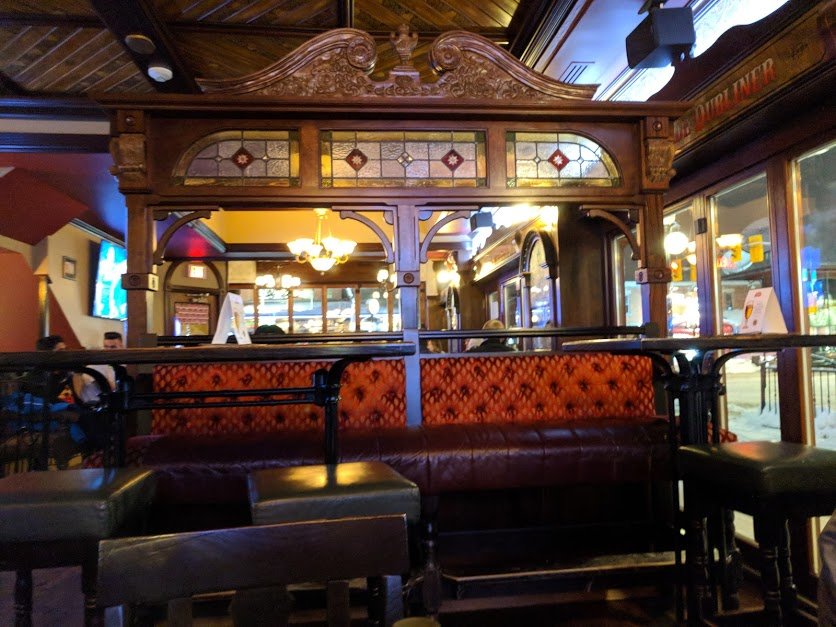 Doesn’t it make you feel like you’re in ye olde Ireland?

It’s a traditional Irish-style pub with a twist of extra sparkle that the Americas have come to expect. All intricate woodwork inside, up to the bar, The Aulde Dubliner exudes an “old days” charm that shows even in its menu.

There are stews, pies, Scotch eggs, Guinness jambalaya and of course a wide variety of burgers. I was craving  some battered cod and chips and they did not disappoint. 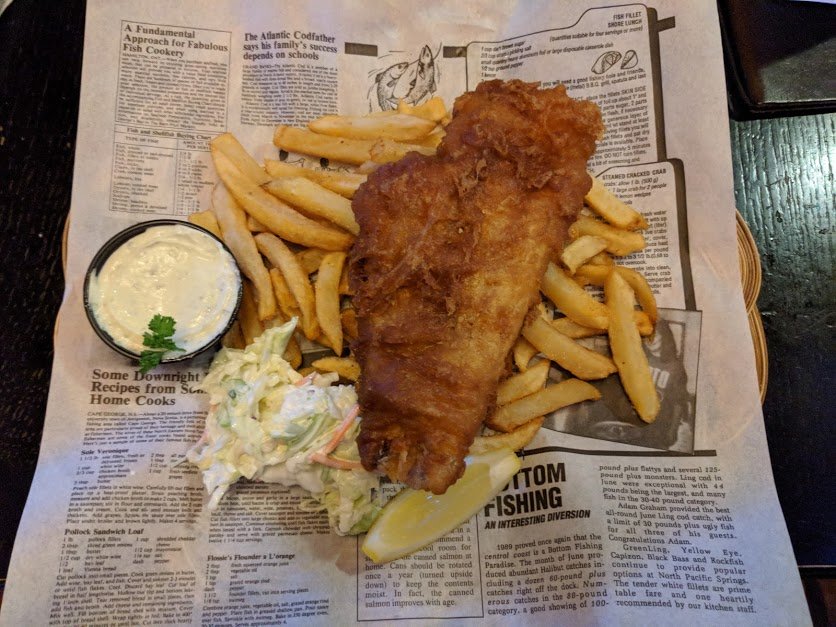 There is no question of where to eat in Ottawa. The answer is, here.

They came out on a mock-newspaper, with white and brown vinegar and plenty of tomato sauce. Wash it down with a nice pint and that’s dinner done!

The Aulde Dubliner gets extra points for the live crooner who was loud enough to be ambient but so that you could still hold a conversation. It was also a great place to watch the Winter Olympics.

Where to find The Aulde Dubliner: 62 William St, Ottawa, K1N 7A3

Pho by Night: For Those Vietnamese Cravings

Apart from the clever name, which I love, Pho by Night hit the spot when I was craving a warming bowl of pho on a cold winter’s night.

Tucked away on Dalhousie Street in the Byward Market area, Pho by Night was quiet when I arrived at 6pm on a Sunday, but it filled up fast with groups of tourists and locals alike. 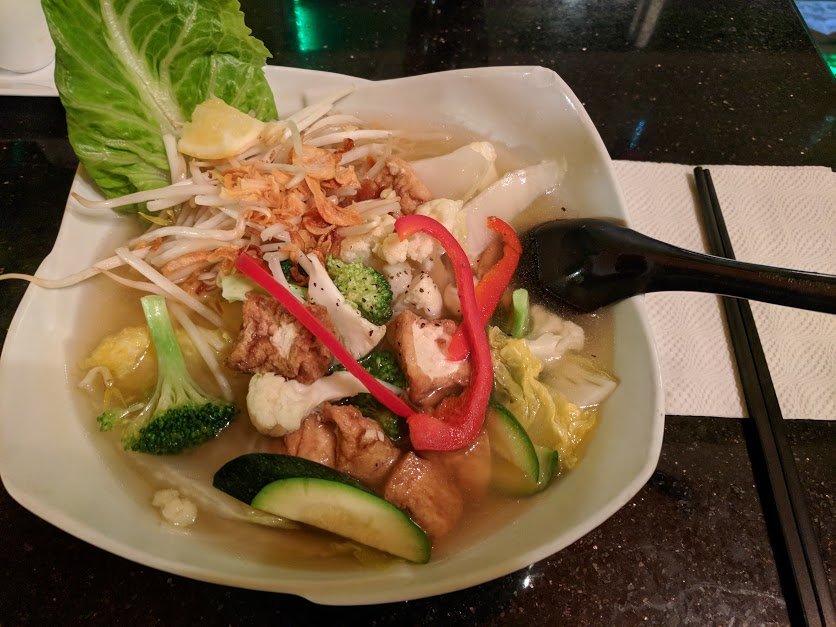 Pho by Night will sate your Vietnamese food cravings easily.

What my vegetarian pho lacked in Thai basil and mint, it made up for with a tonne of vegetables and tofu. It was hard to choose between the vermicelli plates and the pho, plus the tasty-looking spring and summer rolls.

I think what made the place for me, though, was the sound of chatter from the kitchen. I had no idea what the women were saying back there, but it sounded like they were having a fantastic time, and I could hear some sass thrown in for good measure.

If you’re looking for a lighter meal, Pho by Night is the place to go. 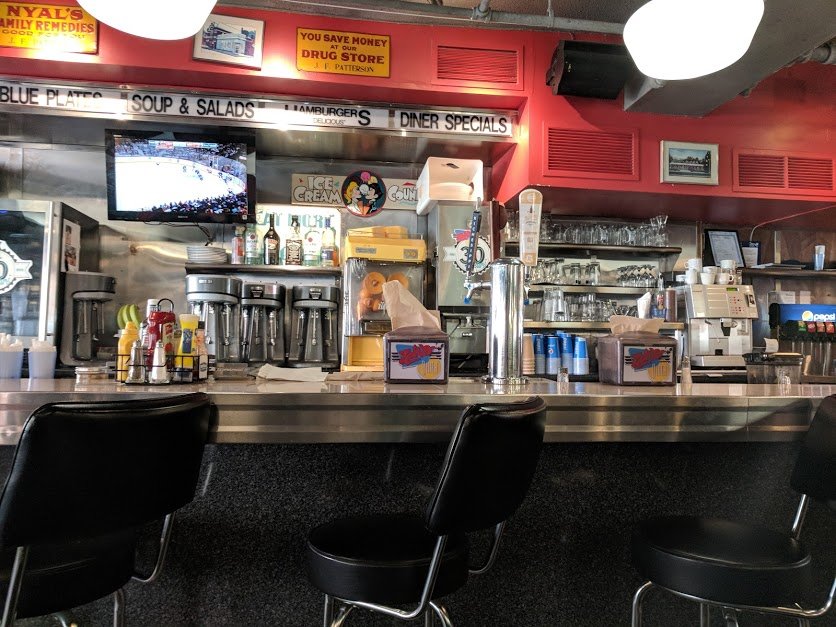 You know it’s Canada because the hockey’s on TV.

The Byward Market diner has been slinging burgers and shakes since 1986, but as its decor suggests, the diner harks back to the 1950s and 60s style of eating out.

Complete with booths, jukeboxes and every kind of condiment you can think of, Zak’s Diner is the place to go if you haven’t experienced diner eating before.

Before I talk about anything else, I need to give a special mention to the fries here. I’m a massive fan of chips (as we call them in Oz) so I can be difficult to please. 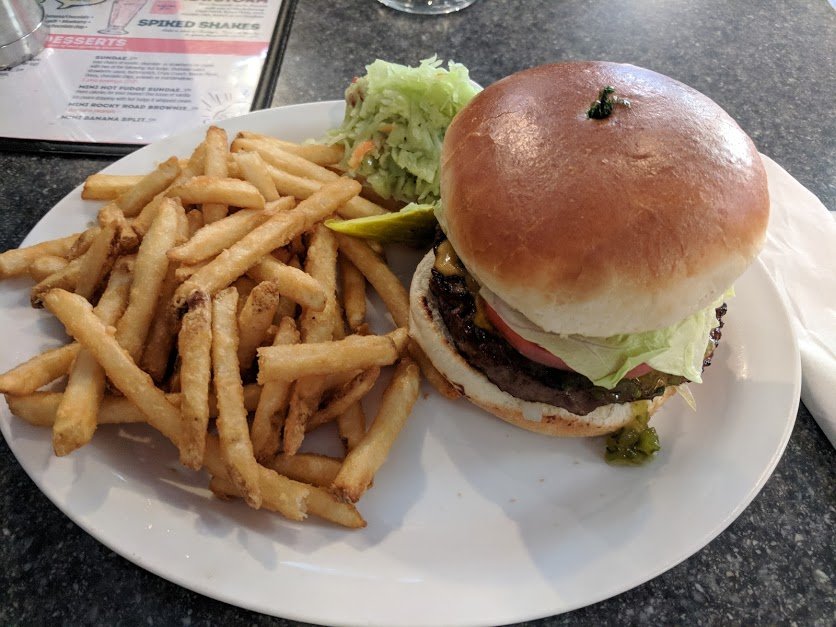 The fries in question…. I want them right now.

The fries are top notch and went so well with the awesome cheeseburger. I definitely recommend adding relish and fried onion to your burger. You might have to eat it with a fork and knife though because it gets a bit soggy by the end.

Now we get to the dangerous bit. I’m lactose intolerant but I couldn’t resist getting a milkshake here. Lactose be damned! 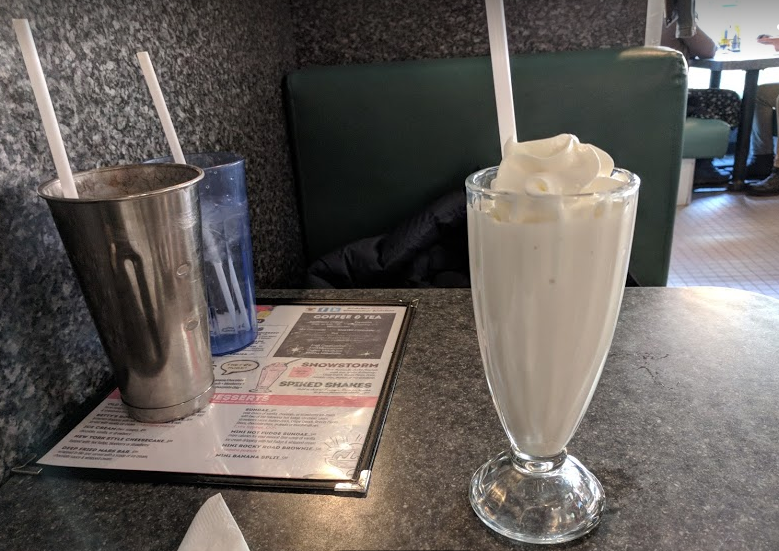 The best milkshake that I’ve had since I was a kid.

It was totally worth every sip! It took me back to Aussie milk bars when mum would get me a shake as a reward for not being a huge pain on a shopping trip. Four thumbs up (if I had that many).

The Fish Market Restaurant: Under the Sea

On a particularly freezing-cold night I walked into The Fish Market Restaurant with low expectations for a seafood diner and walked out a little while later, a very happy traveller.

My expectations had nothing to do with the restaurant itself, but past experience has taught me that seafood can be hit or miss. 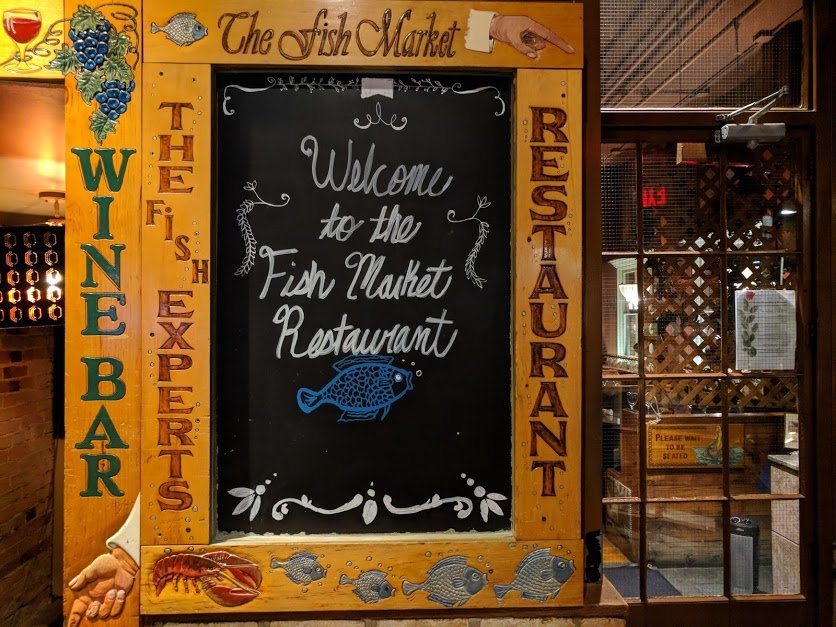 I should have known better, since the casual dining version upstairs boasts Ottawa’s best fish and chips. But I decided to stick with the more up-market option because it looked nice and cosy.

While the restaurant was probably the priciest (but moderate by most standards) of my trip, it was also the most delicious food and wine I had in Ottawa. 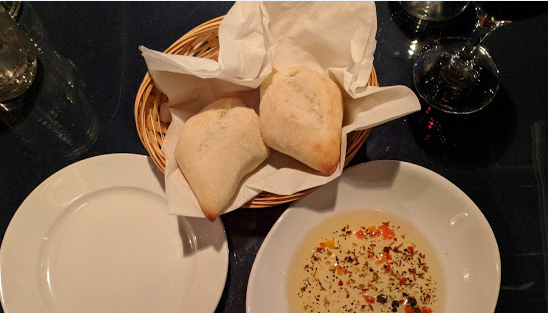 I could have just eaten the complimentary bread and herb-infused olive oil and been happy.

The complimentary bread rolls come piping-hot out of the oven and I decided to go the spicy route for my dinner with the Louisiana Catfish. Described on the menu as “blackened in our southern spices and finished with a spicy Cajun Creole sauce and served over rice pilaf”. 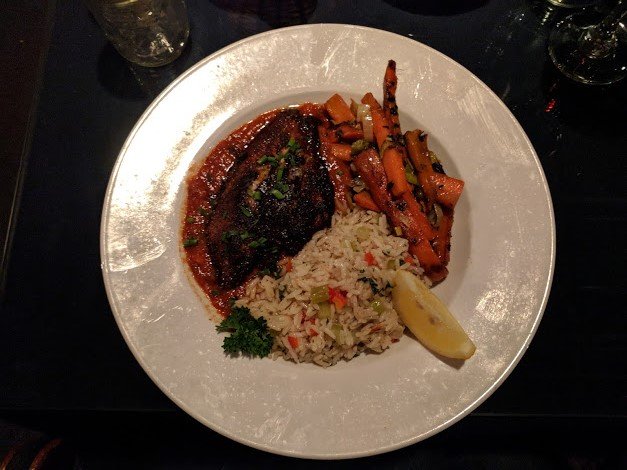 But luckily I didn’t fill up on bread because the Catfish was amazing.

I was worried that it might be a little too spicy for me, but the heat level was perfect and the serving size exactly what you’d want without going overboard.

The good news is that they are an Ocean Wise Restaurant Partner, which means their seafood is caught or farmed with consideration for the future of our oceans.