Working in the US – the etiquette that makes all the difference 6shares
Moving to the US was about more than just experiencing a new country – it was also going to be my first insight into the corporate office world.
My previous work life was spent mucking around in newsrooms which, I’ve since learned, is not the same thing. In fact, it’s a vastly different kettle of notebook-toting, press-hat-wearing fish.

So please accept my heartfelt apologies if you’re reading this and thinking “So? That’s totally normal!” To me they’re as foreign as Antarctica.

Vacation is a dirty word

Let’s start with the first thing that stood out and completely horrified me. In America, paid holidays (known as vacation here) aren’t legislated for, so technically your employer doesn’t have to offer you any time off. Of course most employers want to make their workplaces more attractive, so they give between one and two weeks leave after a year’s service and the public holidays (or “holidays” in the US) of their choosing.

Depending on where you work, that leave time can increase the longer you stay with a company. Compare that to Australia’s base of 20 vacation days and eight public holidays, and you might begin to see why I almost choked on my contract.Add to that the fact that a lot of Americans don’t even take their allotted time off and it seems to make for a tense working environment. Otherwise they’re “on call” during vacations.
Your own time doesn’t exist

See above re: being on call during days off. Maybe this is the same in every country (except in Denmark, I learned that from Helen Russell). From what I’ve observed more than experienced extensively myself, you’re expected to work your eight hours and then some.

And by some I mean early mornings, late nights and weekends and not necessarily with any monetary compensation for that time. It’s just expected. I’ve had conversations with colleagues who are scared to leave the office before their boss does. Because it’s just not done here. Weird.

It seems like an over-the-top statement, and one that probably differs between organisations, but office politics plays a big part in how things happen.

How much you are listened to depends on where your department sits in the hierarchy, whether your boss is well-respected and how many backers you can talk round to your point of view.
It’s a lobbyists wonderland. And here’s a protip: Don’t accidentally CC the wrong person on an email or you could offend any number of people and make enemies for life. I learned that the hard way.

If you want to become a supervisor, manager or a vice president then the US is the place for you. It reminds me of big government in that there are just so many of these positions reporting up the chain that sometimes you wonder what the point of most of them are.

Do you really need a junior Vice President? And then there’s the Senior Vice President of course, don’t forget that dude. It’s a minefield of who reports to whom and working out where everyone sits in the grand scheme of things. And if you think for a second that the VP knows who his lowly plebs are, you can think again.
When you do a good job, your manager gets the praise. However, by the same token, if you stuff up, your manager cops it, thus beginning the Chain of Screaming.
READ MORE:
Australia Day in the USA
Powered by Inline Related Posts

No one ever answers a question in a meeting with “I don’t know”. I think they see it as an admission of incompetence.

So instead of admitting ignorance and promising to do a bit of research to find the best solution, they tend to spout a lot of nonsense. Well, just enough nonsense to satisfy the higher-ups, who also have no clue.
Well played.
Slobbing around

At the office I work in, we have designated cleaners (janitors!) who basically circle the building for most of the day, cleaning the toilets and kitchens and emptying the garbage/recycling/compost bins.

This seems to have fostered a culture of downright slob-like behaviour that makes me want to teach (most) people some manners. Instead of emptying the contents of a cup into the sink or a plate into the compost before stacking them neatly in the dirty-dish tubs, half full cups and plates are precariously balanced on one another.
Spills of food and liquids aren’t cleaned up until the cleaner makes his rounds and don’t even start me on the state of the fridge and microwave. I’ve talked about the distinct lack of toilet etiquette here so I’ll leave that alone. 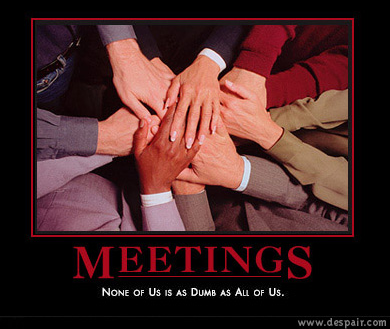