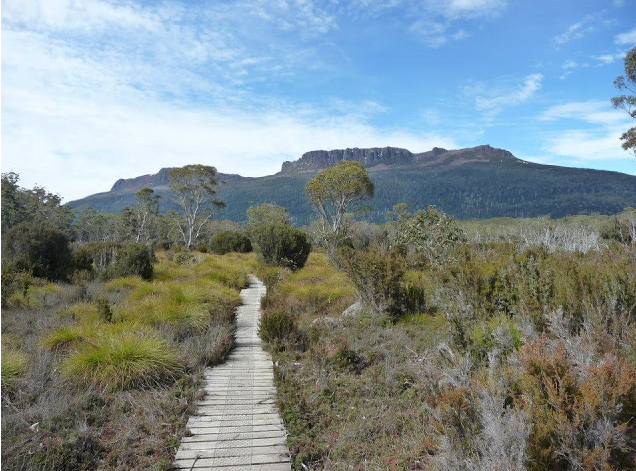 23shares
WARNING: The Overland Track is a serious undertaking, requiring well-prepared walkers with a good level of fitness, who understand the risks of walking in a remote alpine area. The weather can change rapidly and frequently, within just a few hours, from burning sun to sleet and snow. Deaths have occurred (even in the middle of summer) when people have been caught unprepared in cold, wet and windy weather.

These comforting words are the first that greet you on the Tasmania Parks and Wildlife Service webpage dedicated to the Overland Track. When Third Brother and I embarked on the trek, I went in with about nine or ten hikes under my belt. Mostly two or three hour jaunts into the Blue Mountains, carrying a backpack weighed down with chemistry and physics textbooks.

I didn’t understand the risks of walking in a remote alpine area, couldn’t fathom that the weather could change so drastically so quickly and had never been on an overnight camping trip, forget the six day hike we were getting ourselves into.

While there was a visit by the rescue helicopter on day two of the trip, it wasn’t for me. Or Third Brother.

We did the whole thing as part of a small group with two guides, so that I wouldn’t be held responsible if we got lost or collapsed midway. It was one of the best experiences of my life to date.

The Details
The Overland Track is nothing to sneeze at. The path through Cradle Mountain-Lake St Clair National Park clocks in at 65 kilometres (40 miles) through a variety of terrains. The World Heritage Area has a ‘no campfire’ policy and whatever you take into the park needs to come back out with you. That includes rubbish. 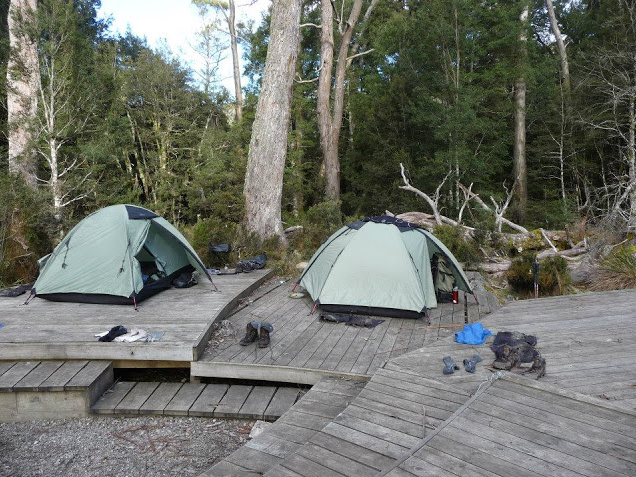 There is a hut at each campsite with bunks, heaters and cooking facilities but it fills up quickly, especially during the warmer months. Tour groups aren’t able to take advantage of the huts though, it’s all outdoor camping with a tent between you and the wildlife.

That apprehension of the first day was not helped by the misty rain as we rolled up to Dove Lake. The lake sits in Cradle Valley and even with a 20kg (40 pound) pack on your back, you want to stand and stare for a while.

Moving up the mountains slowly, the damp button grass and vegetation began to give way to rocky pathways. Getting used to balancing all of that camping gear on your back while steadily moving higher is no mean feat. Especially when you get to a chain anchored into the rock above you. The way is so steep that your grip on the chain is about the only thing keeping you on the side of the mountain. 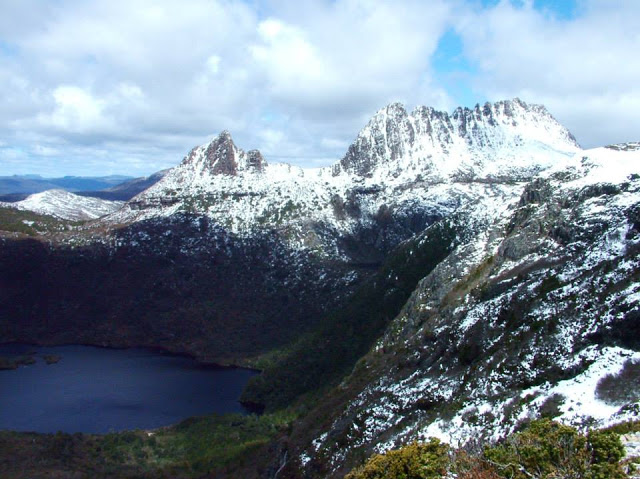 It sounds scary because, as a person with a mild fear of heights, I was absolutely petrified. But the snow, and the view from the top, were so worth it. Dove Lake stretches out below you, Cradle Mountain glistens to your right, and there’s just valley and snow as far as you can see.

That first day showed just how quickly the terrain – and the ground cover – can change in Tasmania. Even though we visited at the end of October (spring in Australia), we encountered dirt path, vast rocky stretches, hours of hiking through shin-deep snow relying on coloured poles to stay on the path, and duckboard descending through thick bush.
Trudging through the snow was a bit of an eye opener for me. Suffice to say, you can bring as many pairs of socks on this trip as you want, you’ll never have enough. Guaranteed.

An older (but by no means elderly) member of our group somehow injured his foot while hiking through the snow. By the time we made it out of the white stuff and into the bush, he wasn’t fairing well at all.
The group went on ahead while one of the tour guides acted as a crutch to help the injured man to camp. It took them hours longer to arrive at Waterfall Valley Camp and when they did, the news wasn’t great. After hours of conversations on the satellite phone, the rescue helicopter agreed to make the trip to air lift him out the next day. 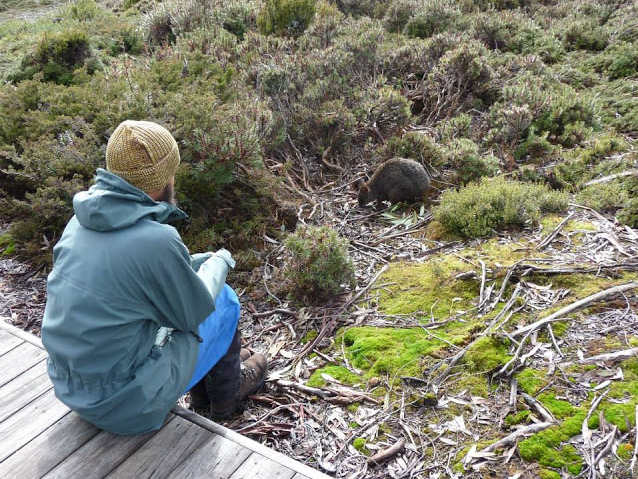 So we spent a little extra time at Waterfall Valley, aptly named because our tent was pitched right in front of the falls – not a great decision when the nearest bathroom is 500 metres away in the dead of night. The upside was all of the animals we got to see. Ever heard of a pademelon? Neither had I, until Third Brother encountered with one.

Just a leisurely 8km (5 mile) stroll today, which is just as well since shouldering that backpack is a fresh hell. Luckily we get to shrug them off around lunchtime to visit the beach! Well, it’s really Lake Will, but the shores are sandy and take a bit of extra effort to get to, so it feels like you deserve a dip once you arrive. 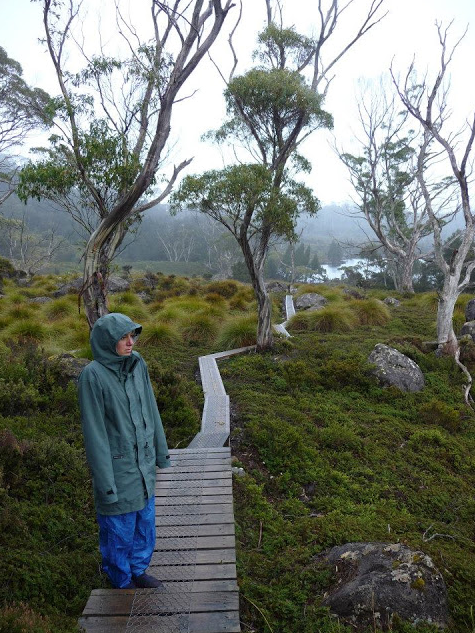 A night at Lake Windermere prepared us for one of our longest hiking days. Seventeen kilometres stretched before us through rainforest, up mountains, back down mountains and then, back up again. Day three almost broke me. I’m not a princess but I’m also not the happiest person after days of stinky drop toilets and no showers in sight. 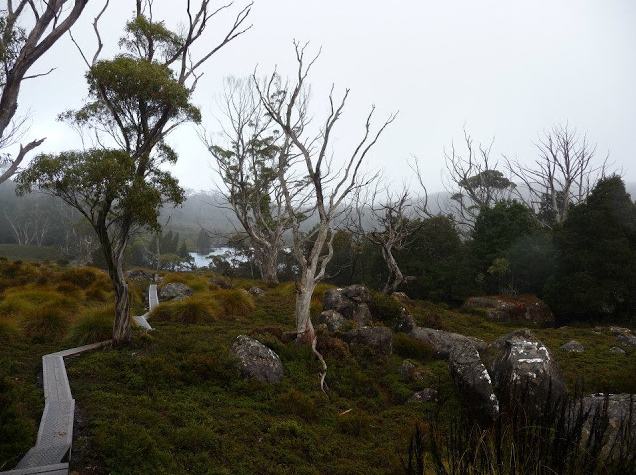 We made it to Pelion Plains, where the views are supposed to be spectacular. There was horizontal rain there waiting for us though, and stingingly cold winds. We couldn’t see anything for the mist and no one was keen to hang around.

By the time we reached our camp I couldn’t feel my hands. My whole hands, not just the fingers. The idea of setting up camp in the pouring rain was not an attractive one. I still don’t know how we managed to do all of those fiddly snaps and get our tent up. I had a bit of a sook and retreated to my sleeping bag at 5pm to be cranky and get warm. Also to wonder what I had gotten myself into and why I thought I could handle six days in the wilderness. 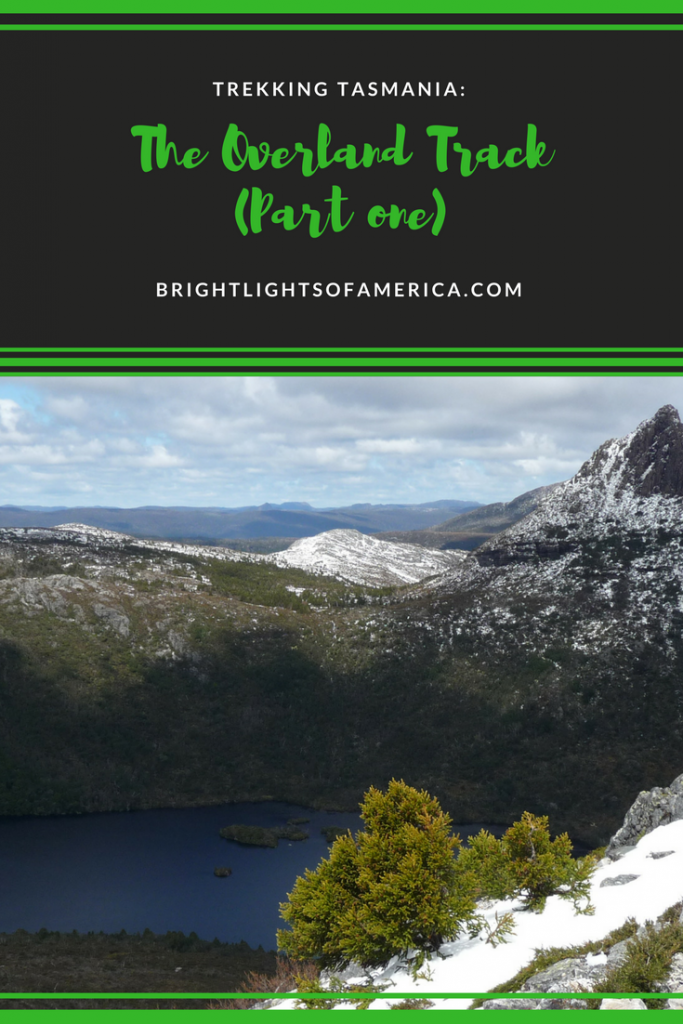