A Guide to bringing family pets into the US 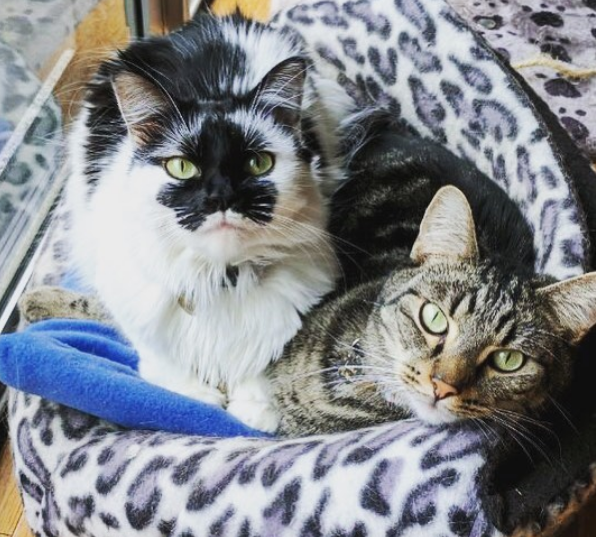 If there’s one thing that might break your expat child’s heart (or yours), it’s leaving a cherished pet behind. But what should you consider before starting the process of bringing family pets into the US? And what hoops will they (and you) have to jump through before you both get the all-clear?

The only pets I had back home were cows and chickens, and they’re not exactly the most acceptable of pets. Suffice to say, I haven’t been through the process of bringing any furry family members over to the US when I moved here from Australia. Speaking of furry family, my brothers don’t count, mostly because they haven’t visited me here.

So for this blog I had to delve into the collective wisdom of the Australian community over in the US for their experiences with bringing family pets into the US. Some used dedicated pet-moving services to bring their dogs or cats to the US, while others brought them over themselves.

Whichever way you’re thinking of doing the big move, there’s real-life experience for you to read about right here. But first, let’s talk about the US government restrictions and protocols.

BRINGING FAMILY PETS INTO THE US

The US Center for Disease Control (CDC) has a few regulations that apply to any animal that is brought into the country – including those that have left and are returning. And while you might not need to present a health certificate for your pet to the CDC, one may be required by certain airlines or by some states. 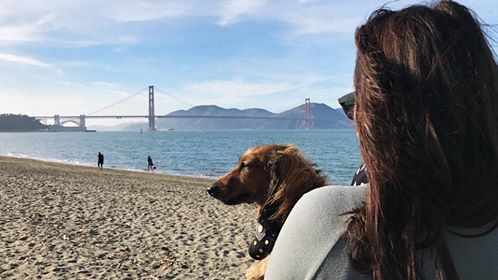 In this post, we’re focusing on dogs and cats, but if you want to bring other animals into the US, you can find out more here. Wondering what types of animals are allowed into the country? Here they are:

Now that you know your lizard is welcome here, we can move onto the regulations for the most common pets.

If your dog has lived in Australia for more than six months, or for its entire life, then you won’t need to have it immunized against rabies before entering the US (although it is wise to do so anyway). There is a list of countries that are accepted from the rabies immunization rule, which you can view here. With that being said, it is a good idea to get your dog and cat immunized to protect them from rabies. It’ll also be easier to take them back with you, should you return to Australia.

Cats don’t need to be vaccinated against rabies in most states, but there are exceptions. Each state also varies on the amount of time that can lapse between booster shots and who can administer them. For state-based rabies information, check the PDF attached to this section of the American Veterinary Medical Association’s website.  Here’s an overview of a couple of the big states: 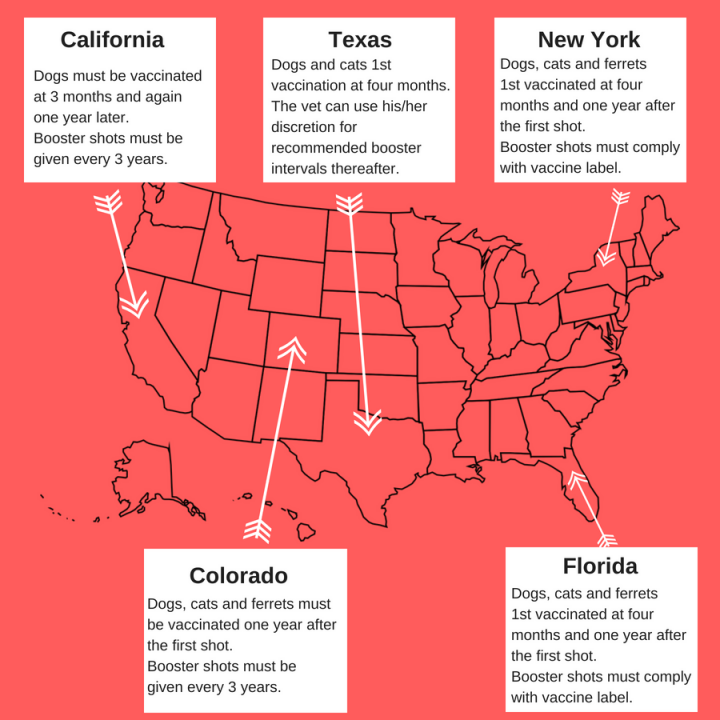 You don’t need a health certificate for your dog or cat, but know that if your pet looks sick or sickly to officers when you enter the country, you might have to pay for it to be examined by a vet before it’s allowed into the US.

Even though the government restrictions aren’t that stringent, compared to what we’re used to in Australia at least, there are some things you should do before, during and after you decide on bringing your family pets to the US with you.

1. Visit an Approved Vet: Get your pet thoroughly checked out by an Australian Quarantine and Inspection Service vet before you leave and, if possible, get a signed and dated certificate of good health. It might come in handy if there are any questions at the other end of your trip.

2.  Check the Airline: Some airlines have different requirements for allowing animals on board. Some smaller animals may be able to fly with you in the cabin for shorter flights and others will need to be put into the cargo hold.

3. Pet Carrier: If you’re sending your pet on its own, try to get it used to the assigned carrier, so that it’s not too stressed or worried about getting in on the day of departure.

4. Summer Months: Some US airlines won’t allow pets to be shipped between May and September because of the heat. Make sure you check this stipulation while planning, especially if you have connecting domestic flights within the US.

Now that you’ve read through the important bits and pieces, it’s time to get into stories from Aussie pet owners who have made the trip over with their beloved animals and get a first-hand look at what the process is like.

JetPets for Dogs & a Cat

When Charmaine and her family decided to make the move to the US, she first consulted her vet about bringing German Shorthaired Pointer Abby and Domestic Shorthaired cat Ernie along for the ride. The vet recommended JetPets, and Charmaine was happy with the reviews so she booked the adorable pair with the service. 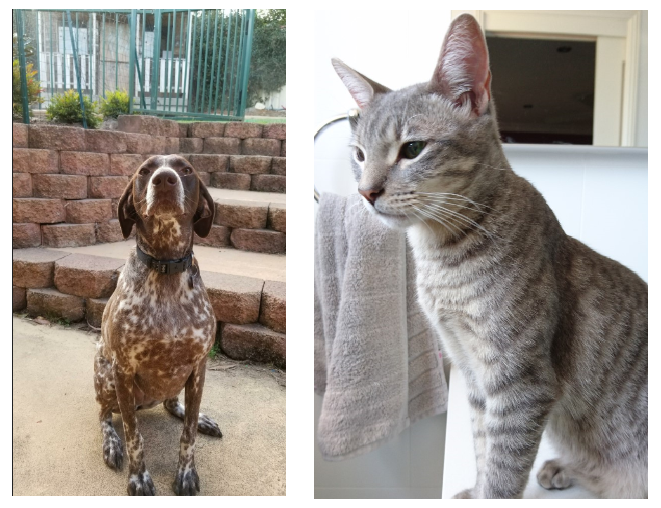 Abby’s happy even though a giant Ernie seems to be looming to her right.

The couple decided to spend some time with their four children at Disneyland when they first arrived here, so Abby and Ernie were shipped over two weeks later.

“If we hadn’t done this, Jetpets said they could get them on similar flights to us so they would arrive at the same time if we preferred,” Charmaine said.

“Our pets are part of our family, we plan to be here at least two years, realistically more like four or five, if the kids love it, we may even stay longer. I did not want to abandon our pets as we love them, plus it would also be devastating for our kids.”

While Charmaine said that Abby and Ernie didn’t need any extra vaccinations, they were told that getting rabies immunizations each year would work in their favour when it came time to take their pets home to Australia again. It cost $4000 to bring the dog and cat to the US, but Charmaine said it was definitely worth the cost and that the pair settled in quickly.

It seems that JetPets is a popular choice for Australians moving to the US. Leah used the company to bring her Daschund Barney over when he was 10-years-old. She highly-recommends the company (by the way, this post isn’t sponsored at all).

“They provided a really comfy crate for him and vet checks on the way, as well as handling all paperwork,” Leah said. “The hardest part overall was the worry and stress while he was in transit.”

While Barney has left us for the great farm in the sky, Leah said she would use the same service to move pets in the future, depending on their temperament.

“I had faith in Barney’s adaptability and resilience. A more flighty dog may not have fared so well,” she said. “He was also quite old when we moved, if he were in any kind of bad health I would have kept him in Australia.”

Do-It-Yourself Move for a Dog

Gwen, who writes a great Aussie expat blog from the LA perspective called It Started In LA, moved to the US with her family and their 2-year-old Cavoodle, Cassie, five years ago. They settled on bringing Cassie along on the same Qantas flight as they were leaving Australia on, for peace of mind. 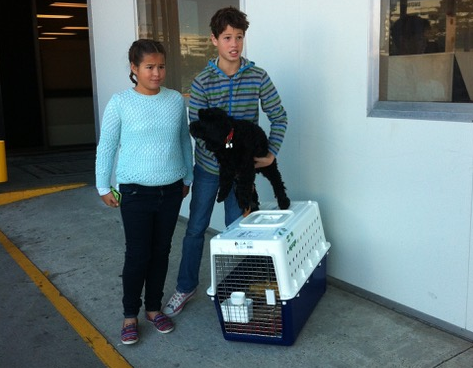 Cassie and two of her best friends, ready for a flight to LA.

“I decided to bring her myself because someone told me as long as I followed the steps it was easy to do, and the pet transport companies charge a lot of money,” Gwen said.

“I also liked the idea that she would be on the same flight as us so she would leave with us and arrive with us. Once I knew I could do it this way, to me it was a no-brainer.”

Like the great researcher she is, Gwen got down to finding out exactly what was needed. She suggests visiting the  Australian Department of Agriculture site but it also doesn’t hurt to check their US counterparts’ website for the complete run-down. Gwen was also assisted by the airline.

“I started with Qantas and found out Cassie could be booked on our flight. They were really helpful, sent me links to information I needed and supported me to do it myself. Being nervous I called them a couple of times and I also called the Department of Agriculture. I just wanted to make sure I understood everything and wouldn’t stuff up any of the steps. Everyone was very helpful every step of the way.” 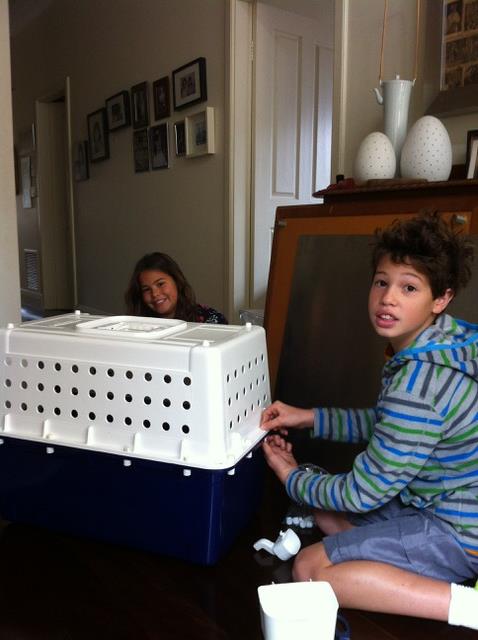 Buy your pet carrier early and make sure it’s big enough for it to lie down, stand up and turn around in.

The family dropped Cassie off at the freight terminal in Australia, then had to fill out some paperwork at the Los Angeles Airport freight terminal before they could pick her up again. Helpfully, Gwen has broken the process down for you:

If you’re planning on bringing your pet back to Australia with you one day, make sure you follow the Australian Department of Agriculture‘s guidelines while you’re in the US.

“I still make sure she has a regular rabies test and pay the exorbitant amount to ensure her title test is valid and the time she spends in quarantine is as short as possible,” Gwen said.

Please welcome current Melbournite, and almost Bay Area resident, Kylie to the mix. She’s moving to San Francisco in a few weeks with her job, but she started looking into pet relocation in February. She and her husband couldn’t part with their two cats, Yoda and Luke, so they’re coming along for the adventure. 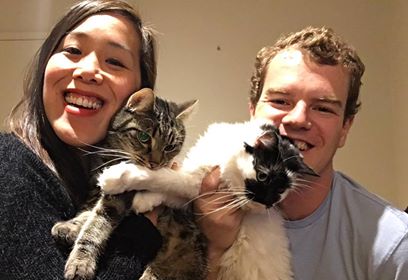 Kylie and Rob with Luke and Yoda, who are also pictured in the main post image.

“My cousin is a vet and had advised I needed to get an AQIS vet (Australian Quarantine and Inspection Service) to vaccinate the cats and also get lots of paperwork ready so I was prepared,” Kylie said.

“I ended up going to Hawthorne vet and met with an AQIS vet to do rabies vaccinations and get some advice, including the need to do the RNA blood tests for my two cats to avoid the hassle of quarantine for 180 days if and when I should return from the states.”

I’ll let you Google RNA because I did and it got a tad confusing. Just know that the blood tests will cost a pretty penny, at $900. Kylie chose Petraveller to bring her cats tot he US, because of the overall customer service experience she had with the company and the results of her research. 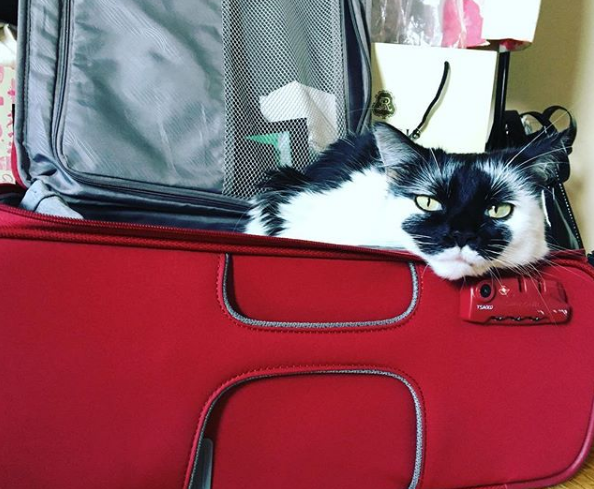 Meanwhile, Yoda here is ready for a trip to San Francisco.

“I did get quotes with JetPets and two other companies but Petraveller, I had the best feeling with – they were prompt, answered all my questions and also were recommended by my global mobility specialists from my company,” she said. “Their pricing was also most fair. I also did some Googling and found some horror stories, which also made me discount some of the other companies.”

Yoda and Luke will leave Melbourne a day before their owners and will be delivered back to them a day after Kylie and her husband arrive in SF, to give them time to buy food and have everything ready for them in their new home. 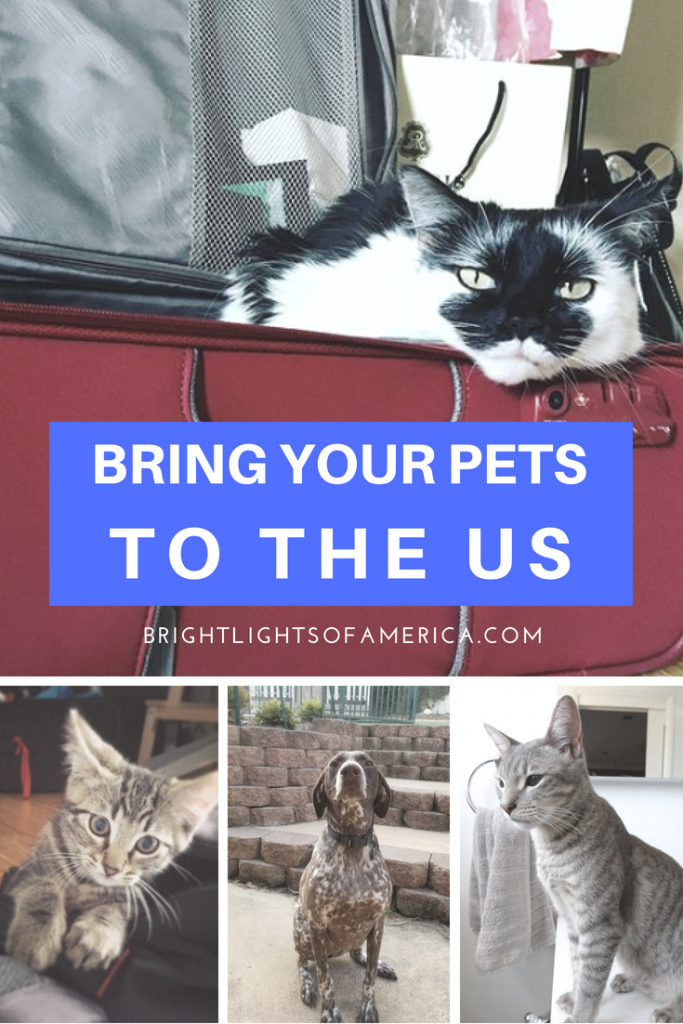