The best San Francisco songs (and beyond) 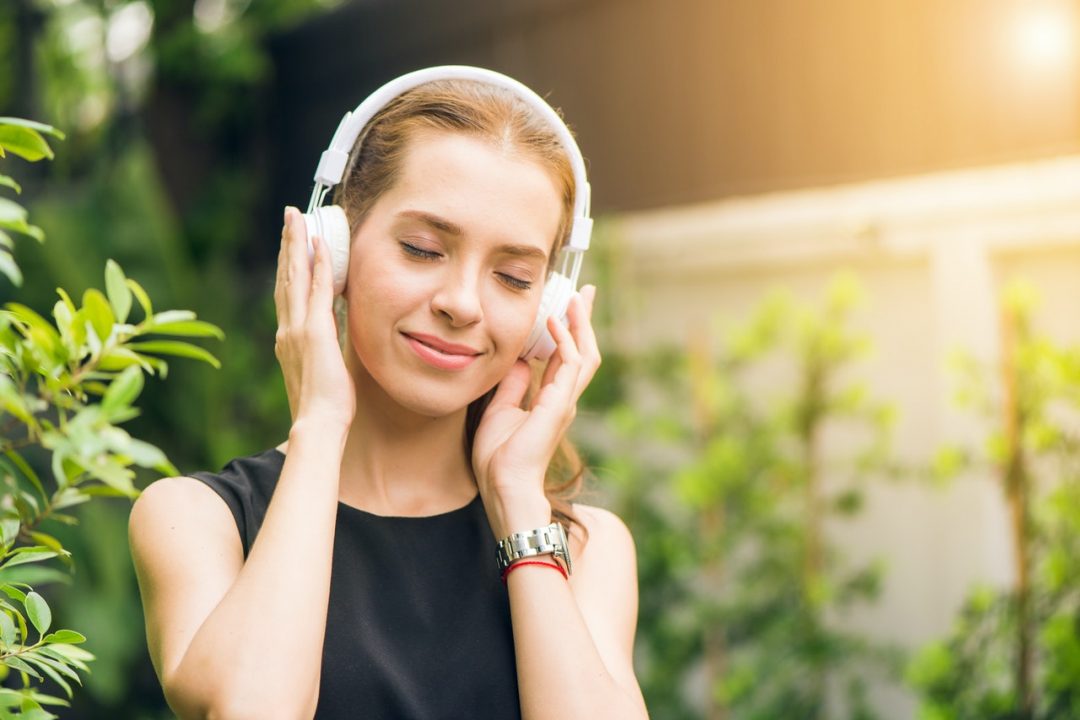 [slider]Sometimes you just want to relive an adventure or a trip to a place that you loved. And there is no better way to capture the mood of that place, than through an epic playlist.

So I’ve collated a list of the best San Francisco songs to get you dancing around the living room, and reminiscing about time spent in the city by the bay.

But, because I’m classing the whole peninsula as “San Francisco” I’m adding a few songs that stray outside the boundaries of the city itself.

Unfortunately for me, I am a pseudo-hipster at heart. Which means I’m not cool enough to dress like a hipster, but I do quite enjoy the music and feeling very out-of-place at concerts surrounded by people who are infinitely cooler than I could ever dream to be.

As a result, this playlist has quite a few of the more obscure bands alongside some well-known favourites. I apologise for none of this.

Please note that these songs are in no particular order, other than the order that they appeared in my head.

From the Arctic Monkeys’ 2006 absolute cracker of an album, Whatever People Say I Am, That’s What I’m Not, which I bought on a trip to Queensland’s Gold Coast too many years ago to count. And have played incessantly ever since.

Songwriter Alex Turner wrote Fake Tales of San Francisco about the early days of the UK band, putting on a “face” for the audience, and trying to appear cooler and more worldly than they (and other young bands) really were.

So, honestly, it’s about being a full-blown poser and faking it. But I still love it anyway.

Fake tales of San Francisco
Echo through the room
More point to a wedding disco
Without a bride or groom
And there’s a super cool band, yeah
With their trilbies and their glasses of white wine
And all the weekend rock stars are in the toilet
Practicing their lines

And while I equate Los Angeles as being poser-central (sorry guys, it’s not my favourite) I’ll live with this reference by the Sheffield band.

You’re right, this one does have “New York” in the title – well spotted. Belle & Sebastian’s Stuart Murdoch actually wrote this song about his favourite baseball catcher, Mike Piazza, and a trip to San Francisco to see him (The Mets) play The Giants.

Glasgow’s Murdoch told Rolling Stone: “I had just met my wife, and she was living in Boston, so we’d meet up in Spain, New York, San Francisco…it was a very peripatetic relationship”.

The song follows the couple on a walk through San Francisco, and hints at secret meetings at the Willie Mays statue outside of Oracle Park.

Elope with me, Miss Private, and we’ll sail around the world
I will be your Ferdinand and you my wayward girl
How many nights of talking in hotel rooms can you take?
How many nights of limping round on pagan holidays?
Oh elope with me in private and we’ll set something ablaze
A trail for the devil to erase
San Francisco’s calling us, the Giants and Mets will play
Piazza, New York catcher, are you straight or are you gay?
We hung about the stadium, we’ve got no place to stay
We hung about the Tenderloin and tenderly you tell
About the saddest book you ever read, it always makes you cry
The statue’s crying too and well he may

That one lyric hinting at the rumours surrounding Piazza’s sexuality was meant to “hold a mirror up to gossipy society”, Murdoch said.

You might recognise this song from the soundtrack to the 2008 film Juno, but it is originally from the Belle & Sebastian album Dear Catastrophe Waitress.

Grace Cathedral Hill by The Decemberists

Who could be better at describing San Francisco than a band from Portland? I’m kidding, but I am noticing that so far, all of these songs have been penned by those from out of town.

Anyway, the indie/folksters released Grace Cathedral Hill on their 2002 Castaways and Cutouts Album. The song begins in the Nob Hill Cathedral and then meanders down to the Hyde Street Pier.

It’s a pretty song for a pretty part of town.

I Left My Heart In San Francisco by Tony Bennett

Since we’re already in Nob Hill, we may as well make a stop outside of the Fairmont Hotel by the Tony Bennett statue and mention this classic.

The oft-covered I Left My Heart In San Francisco, is a quintessential tune that was actually written in Brooklyn New York, but George Cory and Douglass Cross. 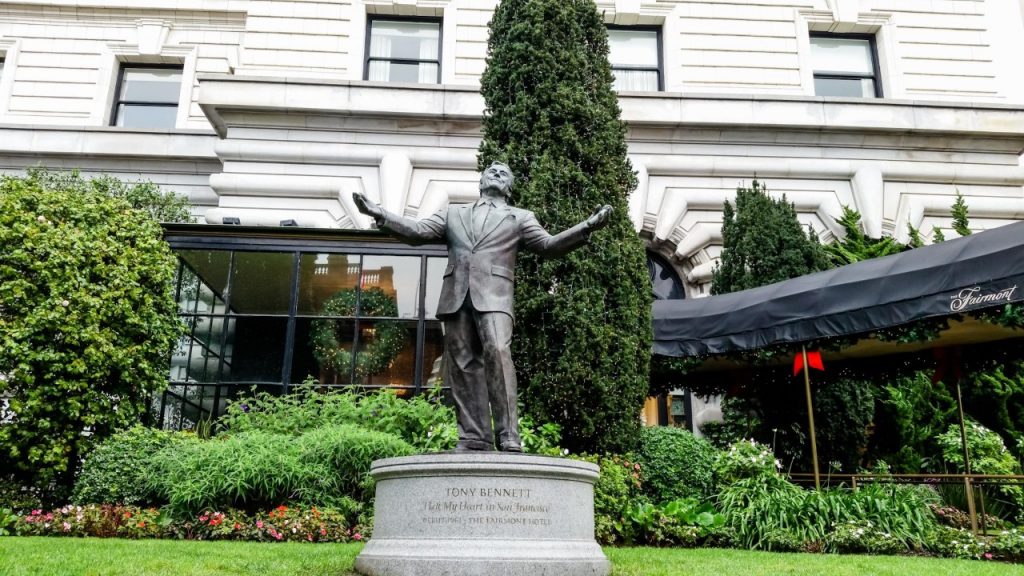 A statue to Bennett was unveiled on his 90th birthday, outside the Fairmont Hotel, where he first performed I left my heart in San Francisco

Bennett released it as a B-side to the single Once Upon a Time in 1962. Nowadays, the San Francisco Giants play the song after each winning game.

The loveliness of Paris seems somehow sadly gray
The glory that was Rome is of another day
I’ve been terribly alone and forgotten in Manhattan
I’m going home to my city by the Bay
I left my heart in San Francisco
High on a hill, it calls to me
To be where little cable cars climb halfway to the stars
The morning fog may chill the air, I don’t care

Come Back from San Francisco by The Magnetic Fields

This ode to San Francisco (or returning from the city) feels like a light breeze during a picnic at Golden Gate Park.

The Magnetic Fields are a Boston 5-piece, headed by main songwriter Stephin Merritt, and this song implores for a love to return to New York from the city by the bay.

Come back from San Francisco
It can’t be all that pretty
When all of New York City misses you
Should pretty boys in discos
Distract you from your novel?
Remember I’m awful in love with you

Save Me, San Francisco by Train

If you’re looking for a song that name drops everything places you’ll recognise, Save Me, San Francisco by Train is for you!

It was released back in 2011 on the San Francisco band’s fifth album. The music video follows the protagonist’s drive across the city to get to a wedding, but he runs out of petrol and ends up having to run the rest of the way.

I used to love the tenderloin
Until I made some tender coin
And then I met some ladies from Marin
We took the highway to the one,
Up the coast to catch some sun
They left me with these blisters on my skin
Don’t know what I was on,
But I think it grows in Oregon,
So I kept on goin’ going on right through
I drove into Seattle rain
Fell in love then missed the train
That could have took me right back home to you

I’ve been high, I’ve been low,
I’ve been yes, and I’ve been oh, hell no!
I’ve been rock ‘n roll and disco,
Won’t you save me San Francisco?

(Sittin’ On) The Dock of the Bay by Otis Redding

I can’t believe I made it this far into the list before mentioning this absolute classic from the king of soul, Otis Redding.

This beautiful song, is also a tragic one. Redding began writing the lyrics while sitting in a rented houseboat in Sausalito. Despite the lilting tune and laid-back feeling it imparts, the song is actually about a lonely and depressed man.

Redding was still working on the recording of this song when he died in a plane accident in December 1967.

Here’s a 70s-esque party song from Devendra Banhart. There aren’t any other mentions of San Francisco spots, apart from the title, which also harks back to the band Roxy Music.

But the vibe is definitely San Francisco summer party.

This early 90s folk-pop song was written by the Red House Painters’ Mark Kozelek, before he dissolved the band and reformed it under the name Sun Kil Moon.

The San Francisco local has a penchant for scattering references to his city throughout his songs.

A rare and blistering sun shines down on grace Cathedral Park
There with you I fear the time, when air gets dark
You know I don’t spend days like this
Caught up in lost times of youth that I miss

Can almost hear roller coasters, see sailboats in the sea
Hear noise and screaming
Weaving in and out of happy music box sounds
But here on the ground we’re so far away from that
Time turned older now

Honeymoon in San Francisco by Of Montreal

Talk about laid back, this tune hardly rolls over in bed. I don’t know what that means either. What I’m trying to say is, this is one of those “lazing by the pool” tunes.

Of Montreal know how to write a song for you to enjoy a holiday to.

Honeymoon in San Francisco, what a grand idea
We’ll rent a room in a four-star hotel
We’ll spend the whole time drunk on champagne and lime
We’ll never feel the need to get out of bed
Though on occasion we’ll charter a boat
Sail off to a distant island
Once there we’ll take off our shoes
And relax beneath the sun

These are the songs penned about or alluding to places outside the city of San Francisco, but still close enough to be classified as “near enough is good enough” in my mind.

Do You Know the Way to San Jose by Dionne Warwick

When I first moved to San Francisco, I noticed lots of people referencing this song, about the former Californian capital city, south of San Francisco.

But I swore up and down that it rang no bells, and I had no clue what it was. There’s an epic face-palm confession. It is a classic in every sense of the word.

On a drive to San Jose with my Maid of Honor, a couple of days before the wedding, I mentioned that I’d never actually heard the song and she was horrified.

So she fired up the old Spotify and played me this Dionne Warwick masterpiece and I’ve been mortified for thinking I didn’t know it ever since.

I’m stretching things quite a bit here, but technically, San Francisco is in California. Let’s put to one side that John and Michelle Phillips wrote this song expressing a longing for Los Angeles.

The pair wrote the tune back in the 60s and the most well-known rendition is by the Mamas and the Papas. It is often pointed to as the “sound” of California at the time. 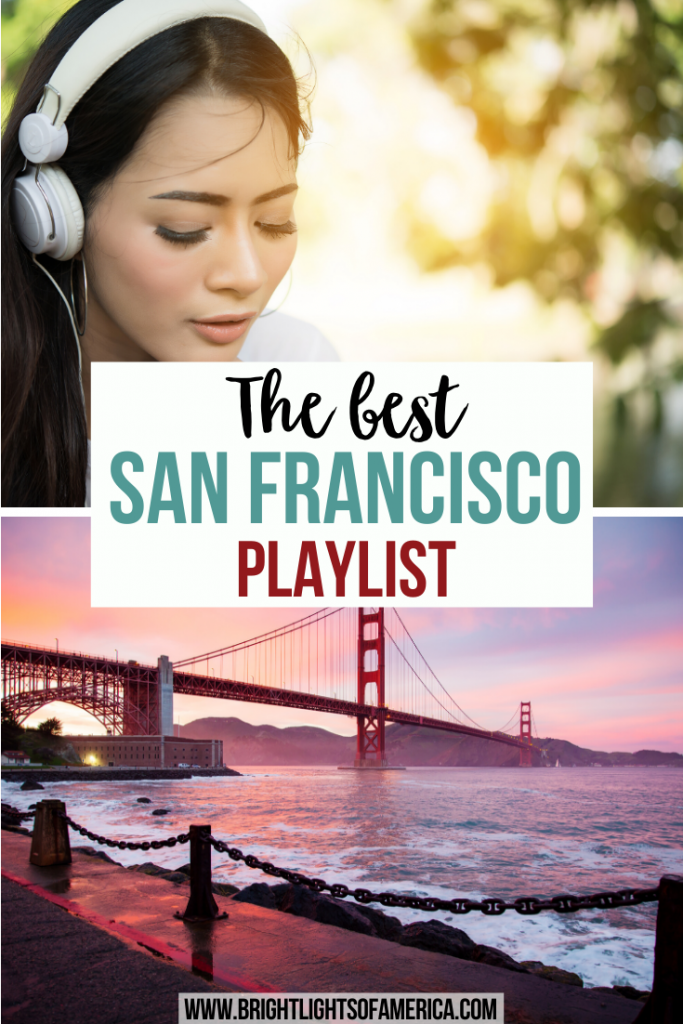