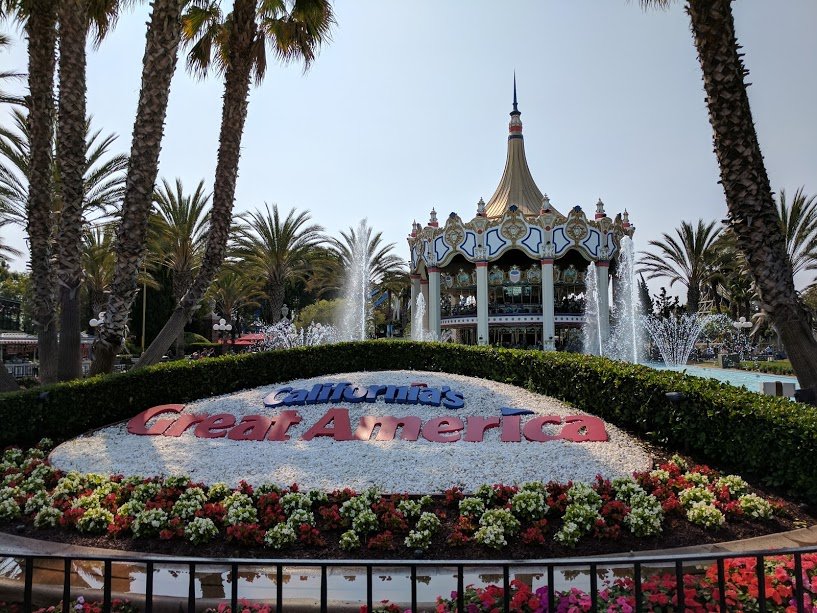 Summer’s all about beaches, picnics, being outdoors and amusement parks. California’s Great America is one of a few parks that are relatively easy to reach from San Francisco.

So we decided to pit two popular amusement parks against each other to see which gives you the best value for money depending on your family’s needs.

This week we’re looking at California’s Great America, in the coming weeks Six Flags Discovery Kingdom will be under the microscope.

The park takes up a 100-acre lot in Santa Clara, about an hour’s drive south-east of San Francisco. It shares a parking lot with Levi Stadium, home of the San Francisco 49ers football team. 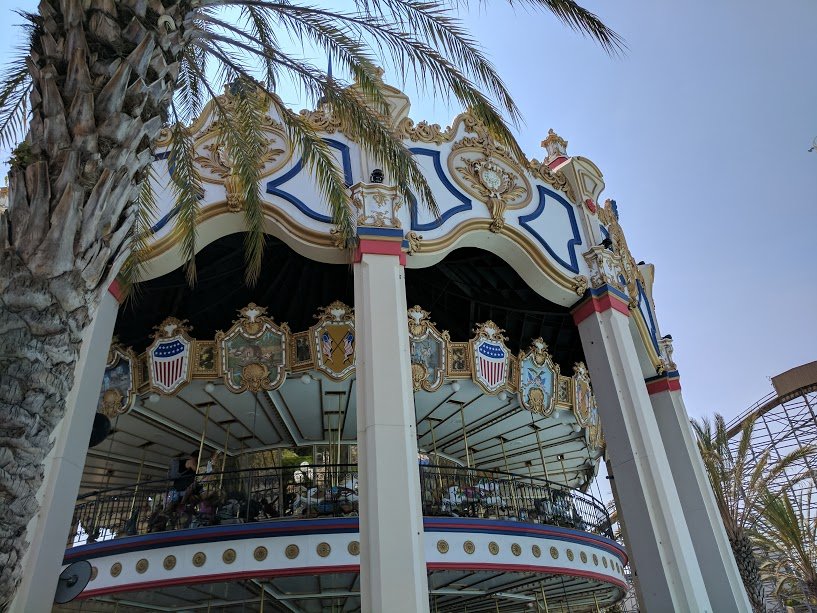 It might be wise to check for game days before setting your trip to California’s Great America in stone. The park has rides and sections for every age group and style of ride.

There’s a kids section, a water park, roller coasters that will get your heart racing and a sky way with enclosed carriages that glide over the park.

Veer to your right as you enter the park and you’ll find one of the parks’ highlights. The Gold Striker wooden roller coaster.

Like most wooden coasters, this one is a bone-rattler. You’ll get shaken six ways from Sunday, and I’m pretty sure I looked like one of those bobble-heads on a dashboard. In case you’re wondering, the coaster car hits 87km/h (54mph) during the ride. 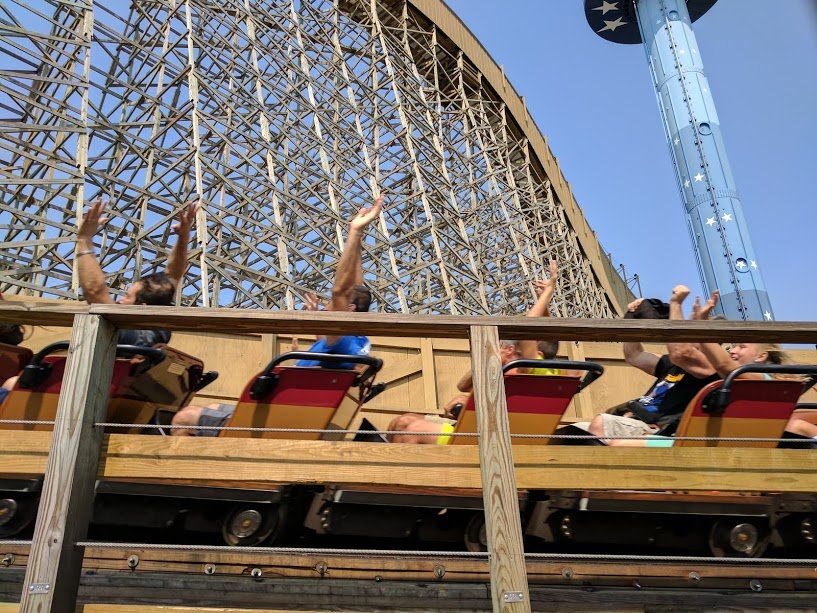 The coaster was opened in May 2013 and the first drop is enclosed in a 53 metre (174-foot) dark tunnel, so you don’t really know when to brace for your stomach to enter your mouth.

Bones and brains intact (sort of) it was time to conquer my fear of loop the looping. I’m a firm believer that humans should not be upside down in any situation. Mr M does not share my views though, so we headed to the Patriot.

It used to be a stand-up coaster, but the ride was converted and its current incarnation was debuted in April this year. It’s now the park’s first floorless roller coaster, giving riders the view of everything underneath their feet.

I can’t tell you want that view was like because I had my eyes shut the entire time.

My last heart-destroying ride of the day was on the Demon. Mostly because as a kid at Australia’s Wonderland, I was terrified of the coaster with the same name. First brother would ride it and I’d be cowering at the exit. 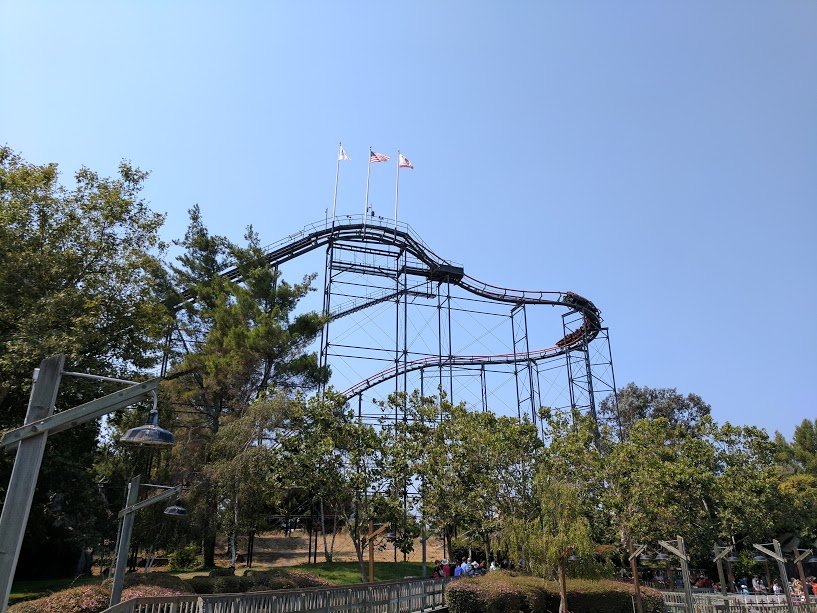 Luckily we got a front carriage seat for the American version of the Demon. Just the place you want to be on a loopy ride.

It’s not a smooth ride, but nowhere near as bumpy as The Goldstriker, and it features some great loops. I even opened my eyes for some of them.

There are a few more coasters that my poor, fragile brain didn’t want me to board.The park recently announced a new coaster, called Railblazer, for the 2018 season.

Because if I’ve learned one thing from California’s Great America, it’s that there’s no end to the thrill seeking-ways of the American public.

I’m using this term slightly loosely for some of these rides. It may depend on your age and your previous ride experience.

More of a crusher than a “thriller”, although it’s lots of fun. Centrifuge is double the spin. You sit in little cars that are spinned kind of like the teacups ride at Disneyland. 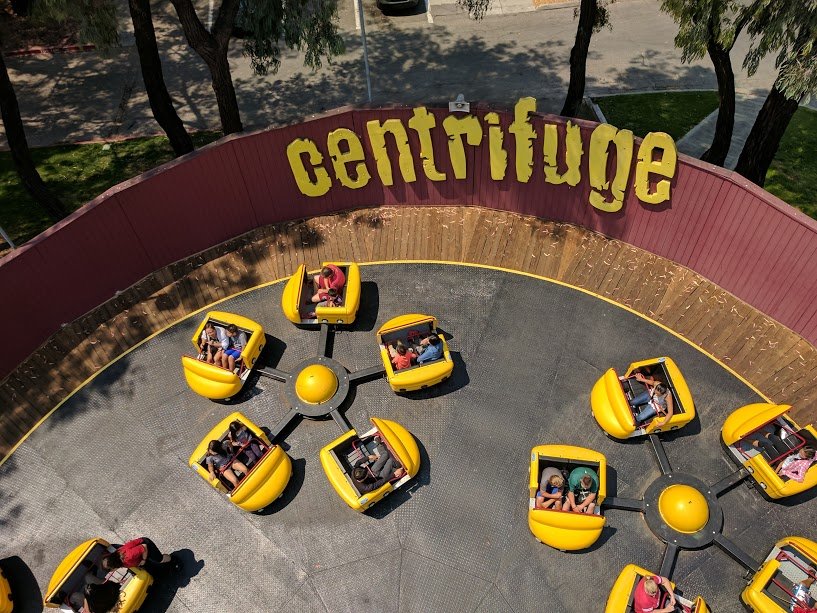 I chose poorly on this ride. I sat on the inside while Mr M was smart and got the outside of the car. So the whole time he was bracing himself so as not to crush me as it spinned.

We both emerged uncrushed and unscathed. Not recommended if you’ve just eaten, by the way.

This is a great theatre-style “ride” for when it’s too hot to still be outside but you don’t want to waste time.

Based on the Mass Effect video game, this is similar to Vancover’s Fly Over Canada attraction in that it takes you on a virtual journey. Don your 3D glasses and enter the spaceship, where you’ll be taken on a tour of new planet Terra Nova. 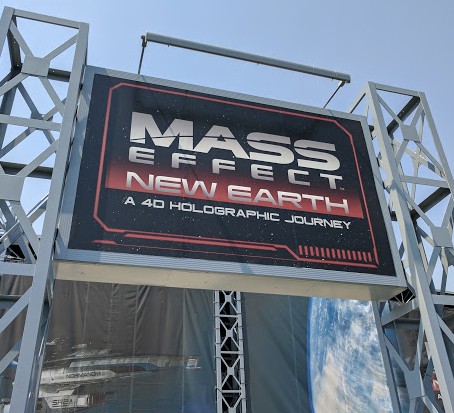 The scenic tour is interrupted by all-out warfare, and the captain steers you through the carnage. Seats move, wind and water are blown in your face and you can feel the ship skipping over boulders as it crash lands.

The Australian-themed water park is perfect for kids and adults, with separate sections to ensure none of the little ones are bowled over by enthusiastic teenagers.

It turns out this part of California’s Great America is themed after the Crocodile Dundee movie franchise. Sorry Aussies, Americans will never get over these Mick Dundee.

The tiny tots can splash around in the shallow Kookaburra Cay, which has a variety of sprinklers, while older kids get an entire jungle gym of water activities. 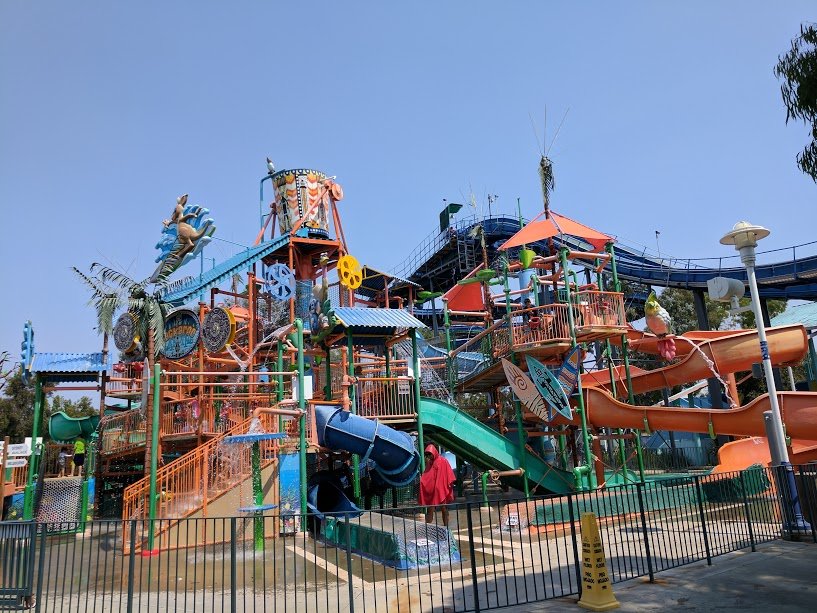 Called Jackaroo Landing, the water experience is basically play equipment interspersed with sprinklers, rope ladders, bridges, slides and buckets of water being dumped everywhere. So even if your little one doesn’t know how to swim, they can still have a good time.

Then there’s Castaway Creek, a lazy river ride, that’s pretty shallow and runs similar to a river and Boomerang Lagoon which is a great family-friendly heated “lagoon”, which fits its tropical theme.

For teens and adults

There are a few higher-adrenaline water rides like Didgeridoo Falls, which sends a four-person raft down a slide that starts 17 metres (54 feet) above ground. 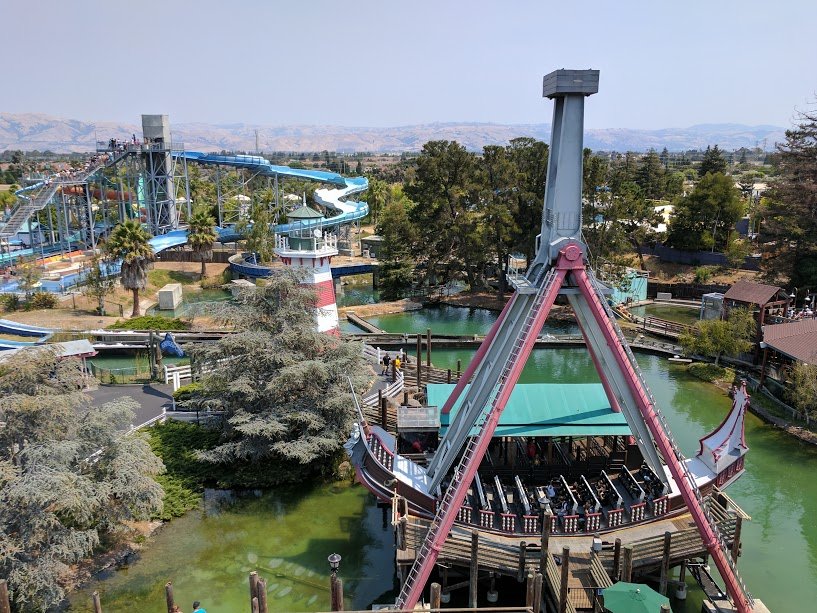 Then there’s the Down Under Thunder – a two person inner tube that slides down a chute then glides up an almost vertical wall.

Get the feeling of being in the ocean at the Great Barrier Reef wave pool. The best part is there’s no sand to get stuck between your toes… and other places.

Ripsnort Ridge water slide will send you down a 45-degree angle chute. It’s similar to the Screamin’ Wombat, which twists and turns three storeys before hitting the water.

Finally we’ve hit the children’s rides! I can’t say that I tested any of them out, but I did wander through because it’s Planet Snoopy! 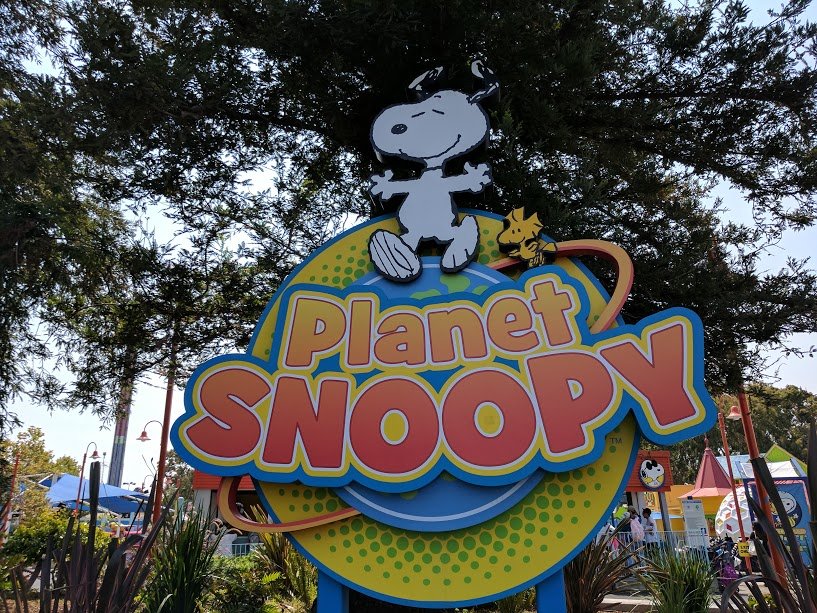 If you didn’t grow up with Snoopy, Woodstock, Charlie Brown and friends, I highly recommend finding some old comic strips online before visiting California’s Great America.

Parents will love that there is a Starbucks inside the park and you’ll find it right here where you need it the most. 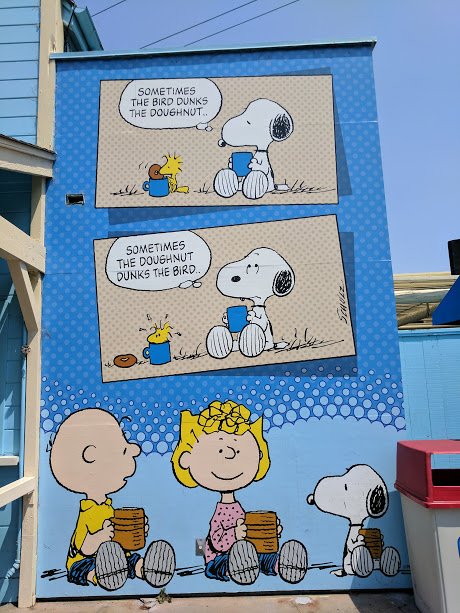 Even if you’ve not got little ones, I highly recommend a ride on the Eagles Flight gondolas, which give a fantastic view of the park below.

Scout around for deals before buying your Great America tickets. They go on sale closer to the end of the summer season, and you can get cheaper tickets if you enter the park after 4pm.

Be careful to choose the right ticket for you. If you have a specific date in mind you can buy tickets for that day, otherwise choose an “anytime” ticket that doesn’t limit you to visiting on a specific day only.

Parking costs $20 at the gate, but only $15 if you purchase a parking voucher online.

We visited on a Sunday in mid-August and didn’t have to wait too long in lines. The longest was for the GoldStrike, which was a good half hour wait. So it’s up to you if you want to purchase Fast Lane tickets. 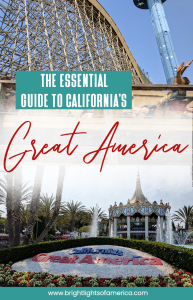